Little Mack and I scrambled to the top of the chicken coop roof a few days ago, by way of a teetery ladder, when we were having so much trouble with the Dreaded Varmint (more about him later) ravaging our chicken flock.  There was absolutely no reason for us to be up there, except that I was a bit under the weather and so I didn’t feel up to much else that evening, and Malachi really wanted to spend the evening with me–up on the chicken coop roof, that is.  He’s not allowed up there all by himself.  That was it.

So there we were–just sitting, supposedly watching for that ole’ Dreaded Varmint, but really we were just hanging out and enjoying each others’ company.  Mack had an old video camera and we were shooting footage of the chickens and chatting.  I was sweaty and filthy from a day spent in the garden, and I was looking forward to my bedtime shower in an hour or two.   Definitely not ready for company.  But we weren’t expecting company.  So my appearance didn’t matter in the slightest. 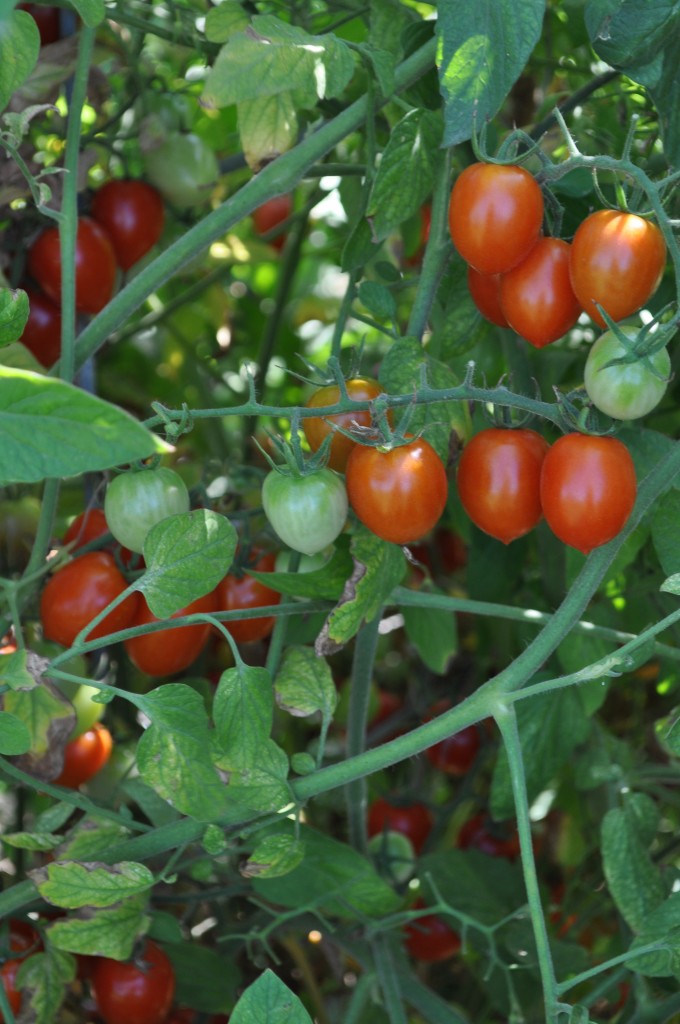 You really only need one of these tomatoberry plants to have all the tiny tomatoes you can ever eat. One. Plant.  Don’t ask me how many I planted.

Bryan and our older boys (Matthew and Andrew) built the chicken coop for me when we first moved out here.  Having a small flock of chickens was at the top of my ambitious list for our new little country place.

My cautious husband has never really approved of our getting up on that roof, but the kids love this special spot. We’ve done a great deal up there–we’ve stargazed, played practical jokes on people (another story for another time), just hung out with a good book and a camera and a journal, and tonight, we were watching for the predator that had killed nearly a dozen chickens in the past week.

In Bryan’s defense–he has never wanted us to damage the shingles or possibly weaken the roof.  He has said that he’s not sure he built the little structure strong enough to hold our collected weight up there.  He’s a Gentleman Farmer, most certainly not an Engineer, he asserts.  For my part, I assert that he always builds everything about twenty times stronger than it needs to be, so why worry?  Of course I mean this as a compliment, but he–strangely–doesn’t always react to this statement in a positive way.

I had told little Mack about his Dad’s uneasiness, and that we needed to be still when we were up on the roof, so we wouldn’t damage shingles or worse yet, fall through the roof entirely.  I have envisioned this scenario many times–between you and me.

I can just imagine feeling the roof creak and groan, looking at my guilty roof-climbing companion in alarm–the clutch of panic and fear as it collapses, all at once, and us falling through, landing amidst broken boards and shingles and chicken feathers, broken eggs, and other . . . chicken products.  (At least I do use the “deep litter” method of chicken coop management!) I’ve never really believed that this would happen, though.  Obviously.

But tonight, I was going to regret our breaking the rules.  I had spotted Mr. Hejne, our hay man, come onto our property earlier and work at baling the hay that he had cut.  I had no idea that he had even spotted us up on the roof, much less that he would eventually join us up there.  But he had, and he would.

He poked his head up over the edge of the roof, and then–to my astonishment and alarm–he climbed on up there with us.  Mr. Hejne is one of my favorite people, and he had stopped to tell me that he had seen a fox when he was driving down the road towards our place.  Little did he know that we’d been having so much trouble with predators killing our chickens!  Mr. Hejne never pauses to visit without telling us several stories.  He’s an excellent storyteller.

And when Mr. Hejne tells stories, he gets very animated.  He tends to burst loudly into laughter and jump up and down a lot.  And I’m not using the word “jump” carelessly here.  When I say that he jumps up and down when he tells stories, that is exactly what I mean.

So, picture little Mack and me–huddled guiltily on top of the chicken coop roof, where we weren’t even supposed to be to begin with–and Mr. Hejne now up there with us, animated as all get-out, winding up into story-telling mode. As he started to jump up and down, I gazed down at the roof, bouncing under his feet.  Would it hold?

Oooh, boy, was I going to be in trouble now!  The roof would collapse, we’d all land inside the chicken coop, probably break our sorry necks, and now I’d have to answer not only to my husband, but to poor Mr. Hejne!  I determined right then and there to not play so hard and fast with the rules, ever again. (Although–in my defense–Bryan had never exactly forbidden us from going up there. As a matter of fact, maybe he should have.)

Mally’s eyes were full of alarm, but to his credit (and to my surprise) he didn’t say a word.  Out loud, anyway.  Several times he leaned over and hissed into my ear “Tell–him–to–get–off!!  We will fall through for sure!”  I just prayed that Mr. Hejne would wrap up his stories quickly this time.  There’s no way that Bryan would rebuild the coop if it came to that–after all the warnings and cautions and mournful looks and whatnot.  Even if it was Mr. Hejne’s fault.  Which, of course, it would be.

Anyway, thankfully, the sun was going down, and so Mr. Hejne eventually told the punchline for his last story and climbed back down the teetery ladder.  Little Mack and I exchanged grateful, relieved glances, and we bid our favorite hay man a fond farewell.  As soon as I could speak again, I suggested that we go in for our much-needed baths.  Mack bargained for fifteen more minutes, and we compromised at ten.  We didn’t see the Dreaded Varmint.

So–that was just a side story.  The point is:  I noticed several things from that awesome vantage point that I probably wouldn’t have noticed from ground level.  To wit:

Thing 1:  It is really charming to watch the chickens bustle about underneath us, completely unaware of us as they are.  One chicken is taking a dust bath.  Another one is eating grain, another one is getting a drink.  It’s a peaceful and sweet time, as the chickens prepare themselves to go into the coop for the night.  A bantam rooster challenges another one and they do a funny little bobbing dance before one gives in and rushes away.  The four young guineas move as one, skittering about, annoying the hens.  Our goose, Lucy, moves about in a stately manner.  And so on.

Thing 2:  Little Mack gets way, way too close to the edge of the roof for my comfort.  Apparently he has not inherited my fear and distrust of heights.  This is unfortunate.

Thing 3:  (And this is where I’m heading with this post, if you’re wondering.)  My garden in September looks halfway decent, if you get far enough away from it.  In other words, I can barely see the weeds from here, and it looks like a lush, bountiful jungle of fruitfulness.  Because of the drought, everything surrounding it is brown and crispy.  But my garden has been pampered and watered and weeded and mulched, and from this distance, it looks great!  Even the beds that have been totally overwhelmed by weeds look nice and green and lush. 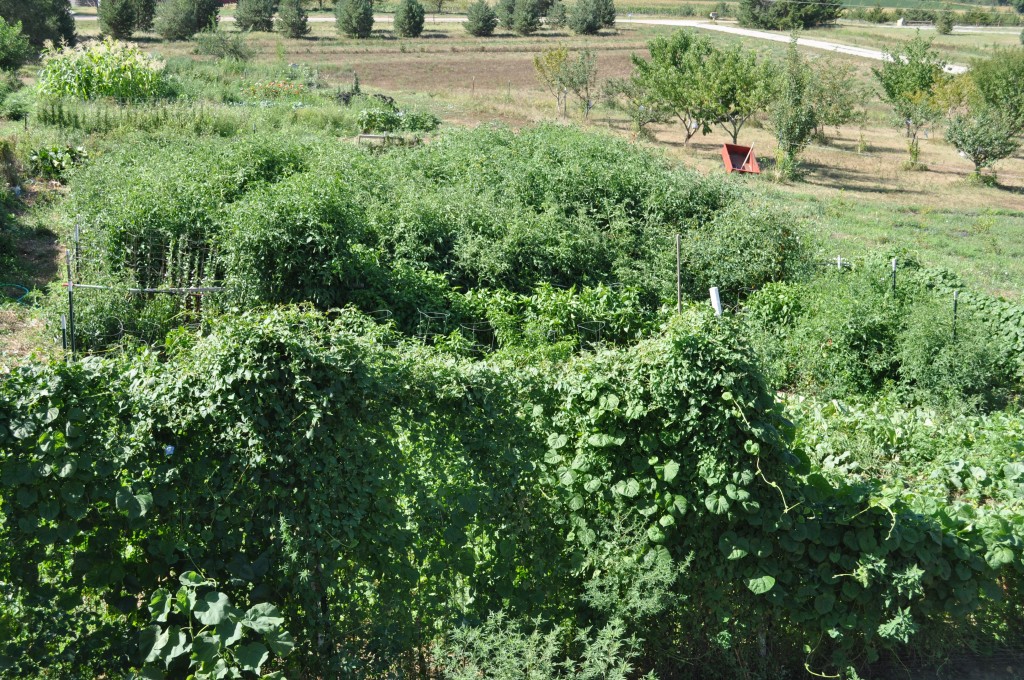 See? You can barely tell the difference between overgrown tomato vines and overgrown weeds from a good distance!

If I were to take photographs of my garden throughout the growing season, it would go like this:  My Garden in April and May: close-ups of little seedlings coming up (the excitement!) and beautiful shots of fresh, green peas with droplets of dew and fresh luscious lettuces . . . nary a weed in sight at this point, of course.  The June and July pictures would be of lush, neat beds and orderly rows of onions, shallots, garlic, hills of squash, and so on.  Optimism and hope would be the themes of the photo displays!  If I were in the photos, I would be grinning proudly.  As the summer wears on, and the weeds take over certain areas (theoretically) and the squash borers eventually kill off the squash plants (because–they always do) and the potato plants die off and disappear into a sea of weeds . . . each month’s series of pictures would be taken from farther and farther away.  Is this not a brilliant idea? 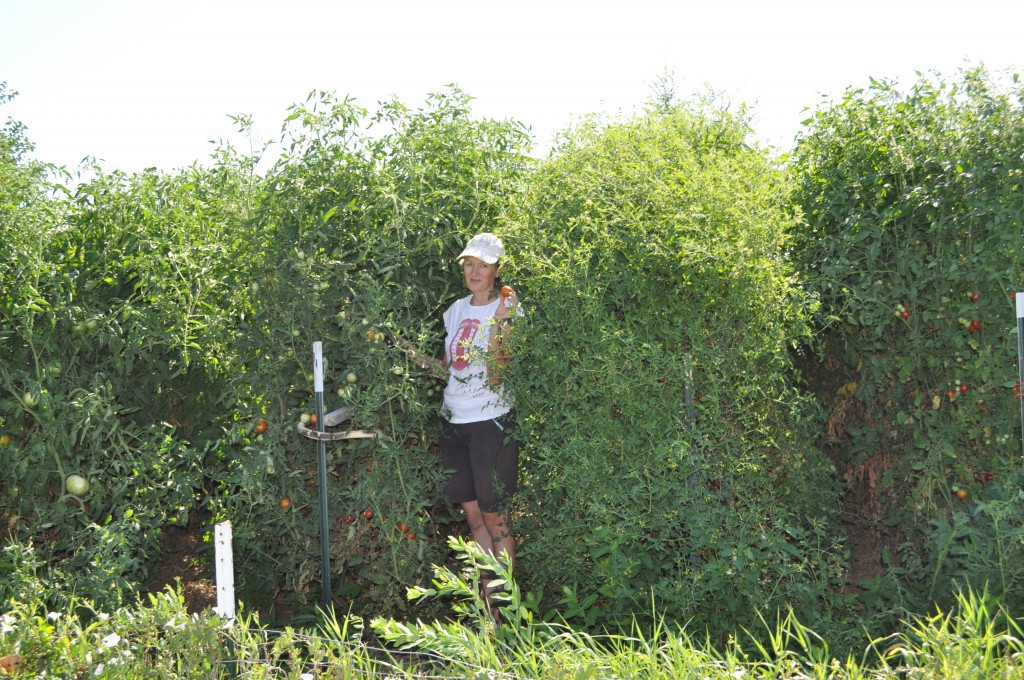 This is me, in my jungle of tomato plants. Yes, I planted the rows too close together. Again.  Don’t ask me how I pick them.  No, really, don’t.  It’s too embarrassing.

And here comes September–I’m clear up on the chicken coop roof with my camera.  I’m as far away as I can get from my garden, and still get a picture of it.  My Garden in October–no garden shots at all, just a picture of a bucket of tomatoes ready for the canner.  And then in November–shots of piles of harvested squash, and Bryan on the tractor, plowing up the detritus, and Timothy helping tear down tomato cages and piling up the tomato vines for our annual garden bonfire.  He’s smiling because for him, the gardening season is nearly over.  I’d take a close-up of his smile.  See?  It’s all in your perspective and in your vantage point.  I could probably make a dandy life analogy at this point, if I felt like thinking that hard. 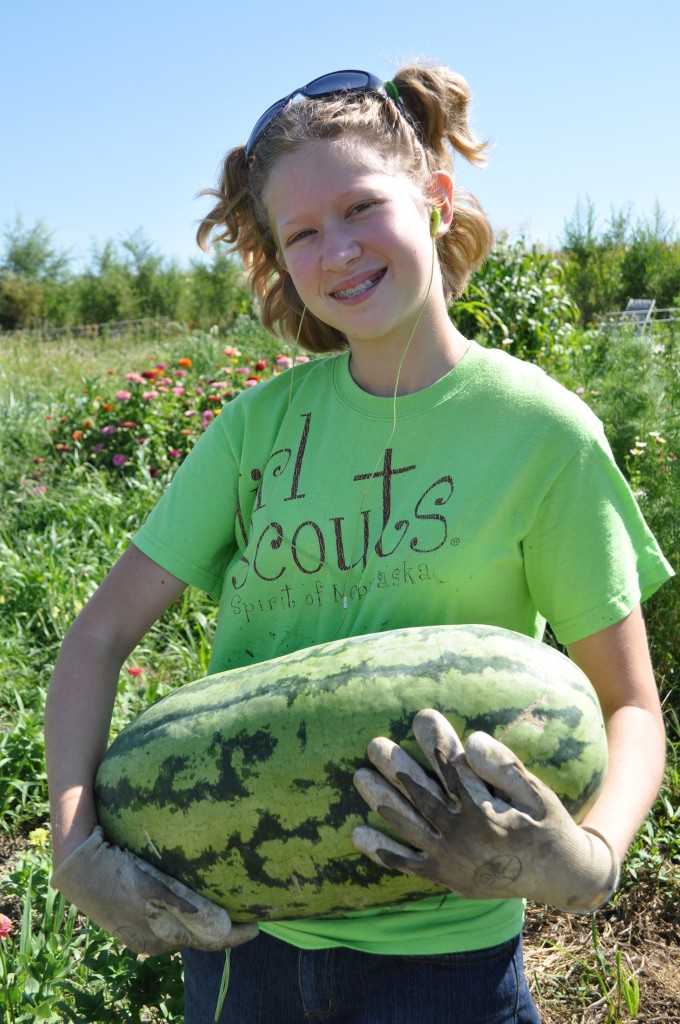 Suffice it to say, sometimes no visual record is not a bad thing.  In other words, nobody need ever know what a mess my garden really is in September.  Unless if I write about it on my brand-new blog.

And with that, here’s a photo of my beautiful tomatoes.  A close up. Even though it’s only September. 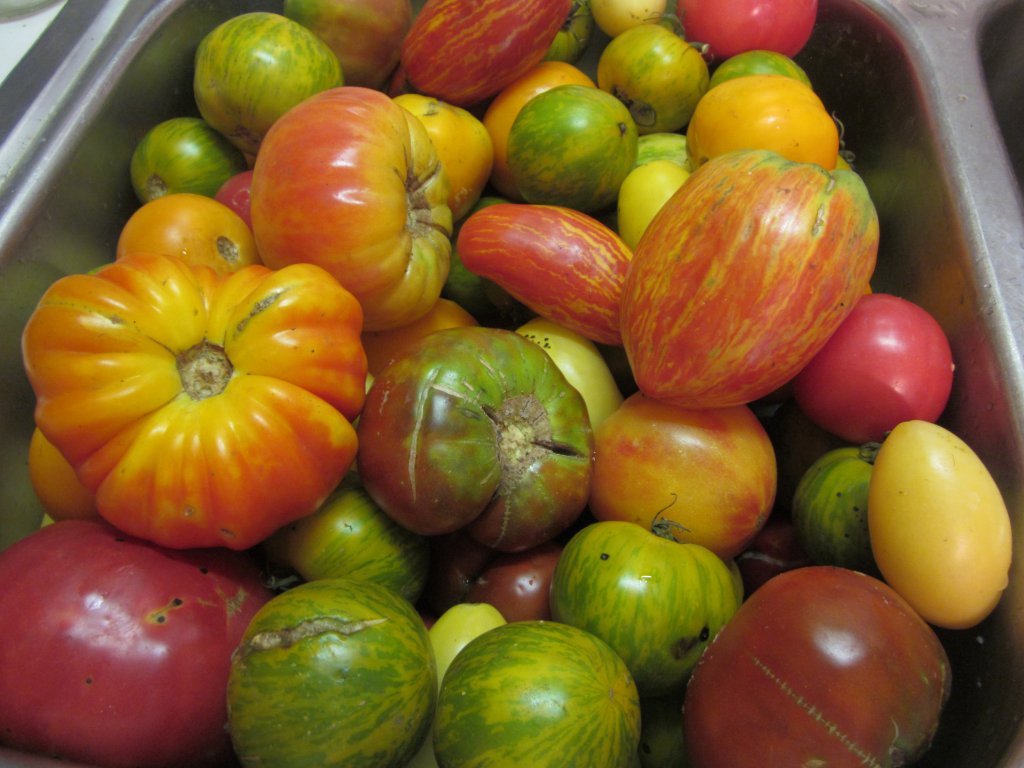 Heirloom tomatoes are a delight to look at, and to eat!

13 thoughts on “My garden in September”