Last week we had our first snow of the year. We got about 6″, and it came down softly and silently during the night, which meant it was absolutely breathtaking outside when I emerged into the sunlight the next morning. The world was covered in thick clumps of royal icing. In layers and layers of diamonds. Sparkly and impossibly beautiful. It took my breath away.

I’m pretty thankful for my chickens, honestly, and the fact that I simply must get out each day and care for them. I trudge a good ways across our yard and to the chicken coop several times every day, and I credit the fact that I still wear the same size jeans I wore in college to this daily enforced activity.Regularly lugging 50-pound bags of feed out to the chickens probably doesn’t hurt my overall fitness, either, not to mention toting 5-gallon buckets of water when the hydrants by the chicken coop freeze up, which unfortunately is quite often. I’m not bragging. Just making lemonade out of lemons. As is my wont. Sometimes. Making snow ice cream, perhaps, out of freshly-fallen snow, would be a more apt metaphor.

New fitness regime: Buy a few backyard chickens and lose weight! Get in shape fast! It’s the “Farm Woman Workout” and it works!! 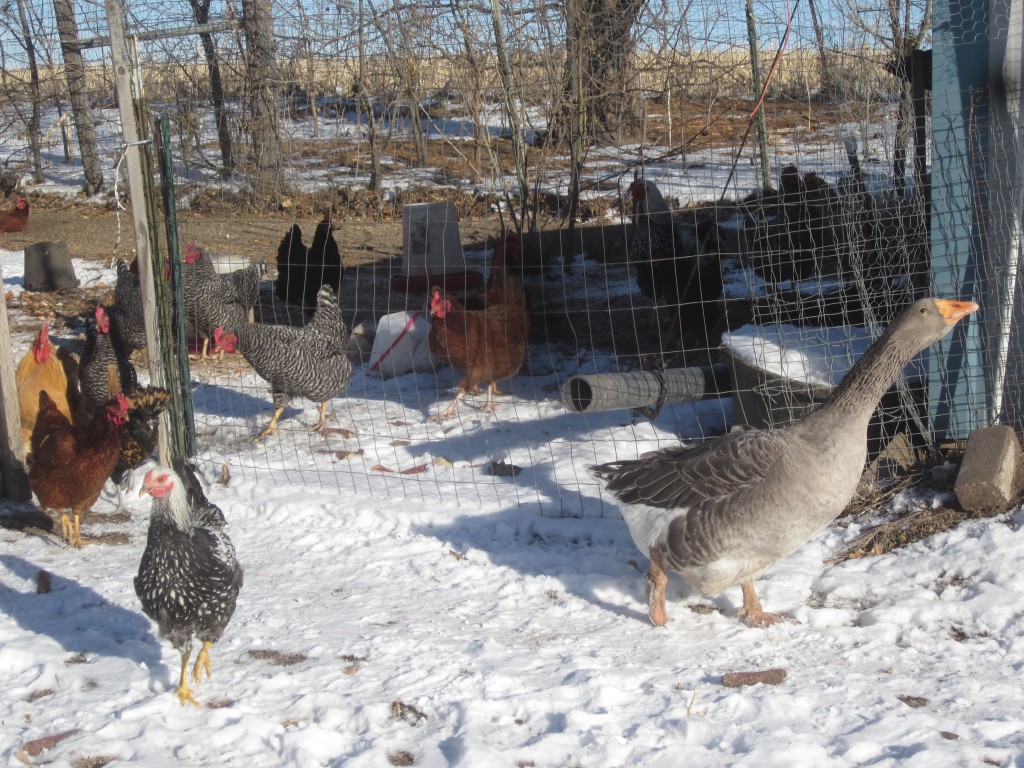 I usually let my fowl out of their protected yard in the middle of the day, so they can forage. There’s not much to forage on this time of year, but they still charge out optimistically. “Is it spring yet??” Here my goose Lucy is leading the charge.

I had my camera in my pocket, Gentle Readers. I nearly always do.

You know I’m a summer-lover, and a slave to my impulse to be outside whenever possible and a gardening freak and a compost devotee. My feelings about winter? Meh. Not so much, baby.

BUT. That’s where the fact that I’m also a lover of beauty comes in handy. It was absopositively, breathtakingly gorgeous on the morning after this perfect First Snow. The snowflakes were like glittery jewels, just piled up in perfect mounds, everywhere, and I couldn’t look away. Every weed, every bush, every tree, was also clumped with mounds of snow. I knew it wouldn’t last long. I looked around hungrily, just drinking it in. I knew that once the sun came out in full force and the ever-present wind resumed its ever-presentness, that the snow on the trees and weeds and whatnot would come dusting down.

The time for taking pictures of this perfect, rare event was very short, in other words. I pulled out my camera, with my clumsy, twice-mittened hands. I took one picture. 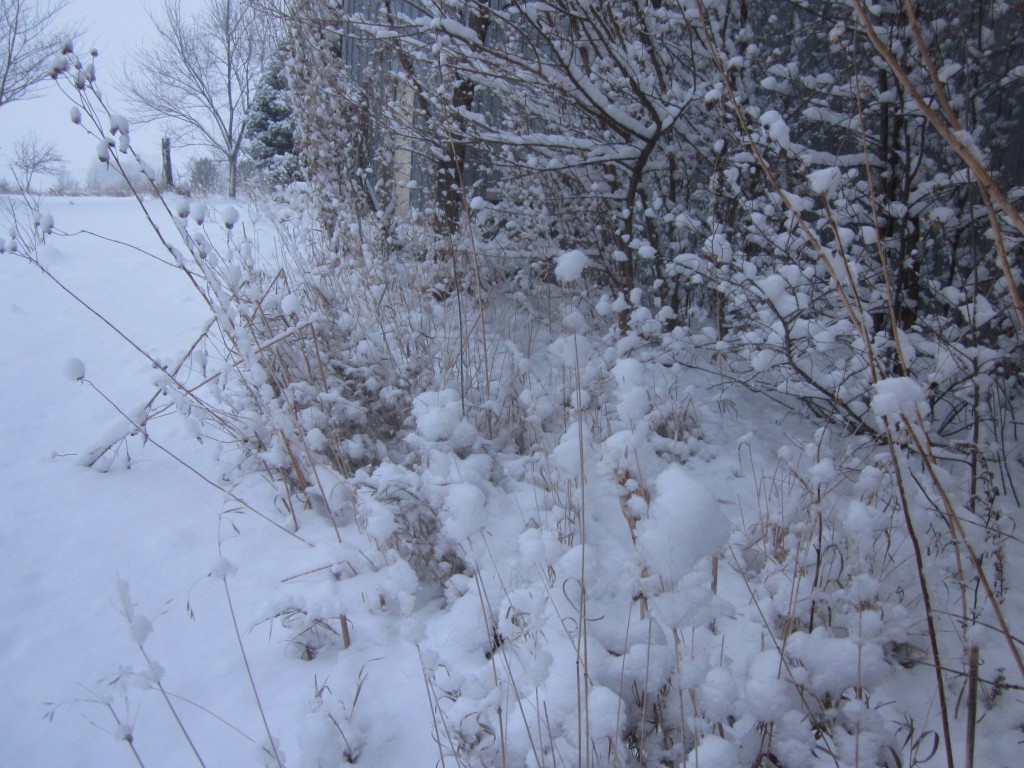 Here’s the ONE picture I took.

Then, the unthinkable: my camera went dark and a message came up: “Change Battery Pack.” Which means, in my case, “Go charge your battery pack and return in a few hours and then resume.”

A more advanced thinker, or a more prepared person than me would have two cameras on hand, so she wouldn’t miss this lovely moment, or at least two camera batteries, but no. But I haven’t yet mentioned the cold, and I really should, since it was a major player in this story.

It was so cold, Gentle Reader. So cold. I hesitate to even mention this, because I know there are people (like my friend Jill and also my brother Matt, both of whom live in Wyoming, and a few other nice people, too, I hear) who would scoff at my complaining about this particular cold. I know for a fact that when it was hovering right around 0° here in Nebraska, it was nearly -20° out there.

But still. Since I was an active tomboyish kid when I was a girl, my feet and hands have both gotten too cold enough times that they are quite sensitive to the cold now, doggonit. And when the temperature outside hovers around 0° (you know I’m going to keep putting temperatures in because I just discovered how to make that little “degrees” sign in–sigh!--it’s so satisfying to be so technologically advanced, isn’t it??) I know that my feet will numb almost instantly. Even with multiple pairs of wool socks and the heavy winter chore boots that my thoughtful dad bought for me years ago.

So at precisely the same moment that my camera notified me about the battery, I realized that feet were already numb, and my fingers were beginning to lose feeling, too. I had just a few minutes to do my chores, I knew, before my hands and my feet were going to feel like blocks of wood, which I wanted to avoid.

So, I stuffed my little camera back into my pocket with a sigh (and a puff of steamy breath) and went crunching about, hauling water and feed to the chooks and picking up eggs so they wouldn’t freeze, and feeding cats and dogs. I took plenty of pictures with my eyes but no more with my little camera. Oh, it was painful, Gentle Reader, and it made me regret mightily that I wasn’t more prepared.

For (as you might have guessed) when I came out later in the morning, after the kids and I had done some schoolwork and my camera battery was once again charged, the snow had fallen off of the weeds and trees and whatnot. It was still beautiful, but a garden-variety beautiful, not a heavenly, traffic-stopping beautiful. In my humble opinion.

And, it was still bone-chillingly cold, so I still didn’t take many pictures. Not until a couple days later. All the while that the temps flirted with 0° and didn’t get much above, say, 8°, (still respectfully cold) little Mack was pestering and begging and pleading to go out and play in the snow. 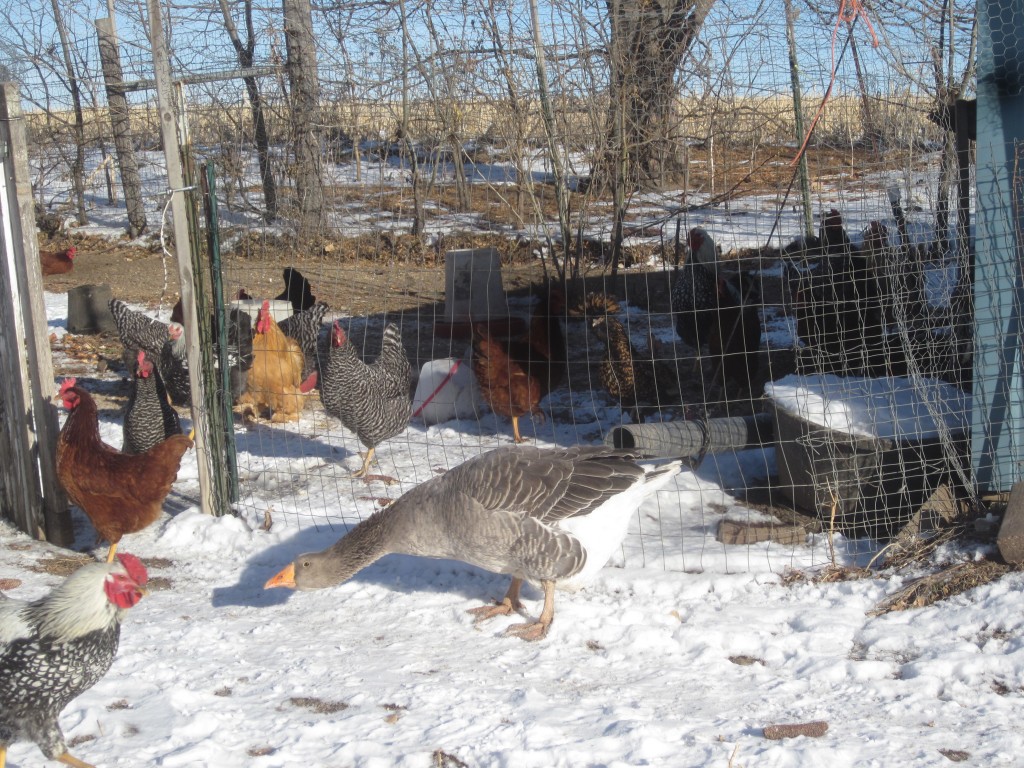 Lucy gets a bit bossy. She was a mother once.

Now I’m actually not a smother-mother and I do try to let my kiddos go do as much active outdoorsy activities as possible (c’mon, of course I do!) but it was just so cold. I knew that if he went out to our sledding hill and suddenly realized that his feet were numb, that it would be a long trudge back to the house at that temperature, and that the risks of his having permanent cold damage to his skin, and his little feet and hands was very real.

So I put my (cold-damaged) foot down. “It’s too cold to play outside,” I said firmly. “In a day or two it’ll be warmer and then we can all go out and have fun. Thus sayeth the Mom. That’s me. As you know.”

Mack was not happy. “All that snow to play in! What do you mean, it’s too cold!? It has to be cold to keep the snow frozen, Mom, and to freeze the pond hard enough for me to go out and try out my new ice skates, right? There’s no such thing as TOO COLD!”

Oh, but there is, little man. And so it was. So we stayed inside, until a couple days later, when Mack hauled sleds to the sledding hill, and his new ice skates that my friend gave him to the frozen-hard pond.

And then we had a startling discovery of great beauty and we realized that the wait had been worth it.

And that’s where I’ll pick up next time, Gentle Reader. Have I told you lately how much I appreciate you, by the way? I love sharing my life with you, and I love it that you read what I write, and share it with your friends (hint hint) and make nice comments below. It all means a lot to me! Thank you, again!

🙂 Hey, by the way, I’m linking this post up with the Blog Hop over at The Prairie Homestead. It’s good clean fun, and I always learn a lot from the other bloggers there! Join us!

Follow me My lovely friend Jill over at The Prairie Homestead graciously condescended to allow li’l ole moi to write a guest post  for her again. One thing about Jill:…