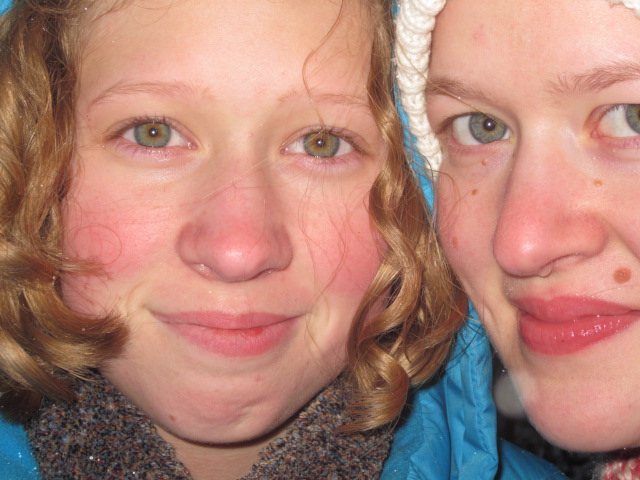 Here are my daughters today, outside in a recent snow. Bethie is on the right, Amalia on the left.

It was finally Christmas Eve.  We’d attended a candlelit worship service at our church, and were driving home.  It was so sweet to be together, all of our little family in the Suburban, laughing, singing, and anticipating a wonderful evening.  As we turned onto our road, snow started to fall in huge, sloppy flakes.  Magical!   Talk about frosting on the proverbial fruitcake!  I love Christmas, and this one was going to be exceptional, I could just feel it.

We’ve had those Christmases when things didn’t go as planned, as perhaps, you have, Gentle Reader.  At least I hope I’m not the only one who has: a) hidden an important present, only to lose it, and spend several panicked minutes on Christmas morning frantically searching for it, or b) scorched the Christmas dinner, and had to slap together cheese sandwiches for Christmas lunch, or c) awaken to those awful words “my tummy hurts . . .” right before a panic-filled rush to the bathroom with a child, followed by the depressing vision of the day ahead, which will turn out so differently than hoped.  Yes, sometimes “life happens” even on Christmas–so a peacefully uneventful Christmas, with no panic, no kitchen failures, no childish disappointments, was just what I was hoping for this year.

The kids and I had worked hard to pick up the house and get dinner into the crock-pot before we’d gone to church, and I could smell the vegetable-beef stew as we climbed out of the Suburban.  All I had to do was whip up a batch of biscuits, and we’d be ready to eat and then do our traditional Christmas Eve activities:  the kids would hang up their stockings, then we’d gather around the wood stove in the living room and read the story of Jesus’ birth together, then each child would carefully choose one gift from underneath the Christmas tree—it had to be a small one, but one intriguing enough to stand on its own!—to open before bedtime.  The kids were annoyingly excited, and raced to the tree, to pore over the gifts.  Bethany ran out to the shed to feed her horses their dinner.

I opened the crock-pot and a rich aromatic steam wafted out.  It smelled divine. . . perfectly delicious.  What a grand dish it had turned out to be!  What a lovely time of year, and what a scrumptious evening we would have!  It doesn’t happen very often, but isn’t it satisfying when things go exactly right . . . especially at Christmastime?

I slid a pan of Biscuits Supreme into the oven and punched the timer for 12 minutes, and turned on Nat King Cole.

“Wash up for supper, kids!”  I sang out, turning to stir the soup.

Suddenly Bethie was standing there in the kitchen, her blue eyes huge in her face, her cheeks flushed with the cold.  The look on her face stopped me, mid-stir.  “What’s wrong, honey?”  I asked, alarmed at the shocked expression on her pretty face.  The only other time I’d seen that look on her face was one day a couple summers ago when she had come in to inform me that our burn-barrel fire had escaped the barrel and we had ended up with an unplanned, impromptu Control Burn, only hideously not in control, with the results a burned-up pasture, and nearly a burned-up shed.

I dropped my wooden spoon.  I must have heard wrong.  “What did you say honey?  It sounded like you said baby–you didn’t say baby, did you?”

“Just come look!!”  A big smile had taken over the stricken expression on my daughter’s face.

The usual inhabitants of our shed at that time were our three horses.  Our cats hung out there, too, and our dog Bea would spend time in the piles of hay and bales of straw stored there.  But that’s it.  We do not and never have kept pigs, by the way.  Pigs are not generally in our shed. We don’t have a pig.

I raced out to see, following my little daughter, her pigtails bobbing behind her in the dark.  There was a baby in the shed.  A baby pig, pink and trembly and sweet.  It was cold and trying to burrow into a pile of hay.  I could hardly believe my eyes.  What was a baby pig doing in our shed?—besides trying to get warm, obviously. I looked up into the swirling snow, half-expecting to see a large star above our shed.

What do pigs eat?  What do pigs eat?  I snapped myself back from the beauty of my little daughter’s face and inwardly repented for my momentary thoughts of future slabs of bacon and cured ham in our freezer.  Who cared what pigs ate.  We eat pigs, that was the important thing.

“Honey—this little pig belongs to somebody, I’m sure,” I gently pointed out, un-magically, and woefully parent-like.  I was a hundred years old suddenly, and totally devoid of whimsy.  “Don’t you think we should ask around, and see, maybe, which farmer around here is missing a little pink piglet?”

Bethie’s face fell, and she bent down to scratch the pink little rump.  “But she’s so cute!  And so little! Do you really think anybody would miss her?  Look at her delightful little tail!”

In her searching for warmth and comfort, “Joy” had burrowed into the hay and only her little curly tail (I had to admit, it was delightful) stuck out, and she was shivering in a pathetic way.  “She has to belong to somebody,” I pointed out.  “Piglets don’t usually roam the plains around here, you know.  Her mama is probably missing her, don’t you think?”

Bethie immediately clasped her hands together and started praying, her eyes beseeching heaven.  She wanted to keep the little pig, so fiercely.  How could a little girl bond with a creature so immediately?  The piglet didn’t even seem to acknowledge her existence.

I turned back toward the house, and then I smelled something burning.  Horrors–my Biscuits Supreme!  I rushed through the falling snow back into the house, and pulled the pan of blackened biscuits out of the oven.  Nat King Cole was still crooning on the CD player, and the timer was beeping like mad.  Rats, burned to a crisp! Black as night. No matter.  I did have enough dough to make another pan full.  A few burned biscuits weren’t going to ruin our picture-perfect Christmas Eve.

Bethie spread the word about the unusual—albeit temporary– addition to our menagerie, and I rolled out another batch of biscuits.  The kids drug Bryan out to the shed.  Meanwhile, I made calls.  There are quite a few farmers in our area that raise pigs, but nobody seemed to be missing a little pink piglet, little beady eyes, curly tail, or maybe they just didn’t want to be bothered on Christmas Eve to claim one.  One neighbor came over and looked little “Joy” over, but solemnly pronounced her not his.  “I dock my pigs’ tails,” said he.  “That one there has a long tail—sorry, folks, it’s not mine!”  He wished us luck, with a grin, as he left.

The boys wrestled a hog panel out of my frozen garden to use for a pig enclosure, and Bryan rigged up a heat lamp to keep little Joy from freezing.  I mixed up what I thought should pass for an impromptu meal for a homeless little orphaned piglet, and took it out to the shed with a bucket of water.  The snow was falling harder now.

“Nobody around here seems to be missing a piglet,” I sighed, and Bethie’s eyes sparkled.

“I knew it,” she breathed.  “It’s a Christmas present from God.  A precious little piglet gift!”

The kids woke “Joy” for her dinner.  She tiredly drank a little and ate a little, then promptly burrowed back into the hay and fell back asleep.

It is commonly known that I do have a soft spot for babies, and even a baby pig has charm, though this one was too intent on sleeping to capture my heart.

I smelled smoke for the second time.  No!  Not more burned biscuits!  I rushed back into the house and was greeted by billows of smoke pouring out of the oven when I pulled it open.  Shoot!  So much for my perfect dinner.  I dumped the second batch of blackened discs into the chicken bucket, noting sadly that they had risen beautifully.

Bryan breezed through the kitchen.  “We could just have crackers with that soup,” he offered, cheerily.  I suppose hot crusty biscuits are not all that important when there’s a baby to care for.  Hmmph.

It was nearly nine o’clock by the time we ate our soup (with crackers) and then engaged in our usual Christmas Eve traditions.  We’ve not had a Christmas Eve visitor like that one since, and we still wonder where she came from.  Despite our best efforts, our little “Joy” didn’t live long, but she did contribute to our Christmas that year by reminding us of another babe born in a stable, full of wonder and promise, two thousand years ago.  A babe that changed the world forever in just a few short years, and still to this day gives the world hope, and joy, and peace.  Magical.