Andrew dropped it quite casually in our laps one night when he and his little family were out to our place for supper.  “Oh, I got chosen to give a Ted Talk, by the way.”  All of us around the table froze, looked at him for a long moment, our mouths hanging open.  We probably looked like a family of astonished wide-mouthed bass.

Several months ago, Andrew had (just as casually) mentioned in passing one day that he had sent in an audition packet for the said Ted Talks that were to take place in Lincoln, but that he didn’t expect to get chosen to present at the event.  He is so self-effacing, this sweet, wildly-creative boy of mine.  This had happened months ago, and I had forgotten about it.

We had a party of sorts the afternoon of the TedX Lincoln event, in Andrew and Sonia’s living room.  Sonia had set up the laptop on the table (out of harm’s way) and we sat on the floor, surrounding Anya, who did all her fancy tricks for us. 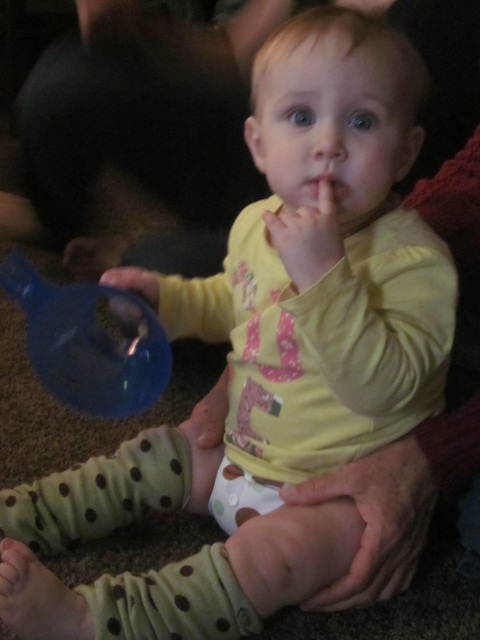 Here’s our little dolly with polka-dot diaper and legwarmers.

We didn’t know when Andrew would present, except that he would speak “sometime between 3:00 and 5:00,” so as the afternoon went by, we got more and more nervous.  Finally (he was the second to last presenter) the MC introduced Andrew.  And my son, ebullient, energetic, nervous as all get out (he told us later, we couldn’t tell) bounded up to the stage.

Here’s a tape of his speech for you to enjoy.

And, while I am shamelessly promoting this son, let me share with you a link to his online webcomic.  Andrew draws a (it’s daily, during the workweek) cartoon that highlights the lives of those who serve us nearly on a daily basis:  waiters and baristas.  He has had much experience in these lines of work, as he worked his way through college as a waiter in a restaurant, and is currently working at Starbucks as a barista.  Check it out!