I’m going to deviate from my usual blogging habit, and start out with the point of this post, rather than make you read for three hours to get to it. You can circle this date on the calendar with a red marker. And–you’re welcome (deep curtsy). It’s this:

Sometimes it’s better to just do something quick and shabby, rather than not do it at all.

Believe it or not . . . I struggle a bit with perfectionism. Not in every area of my life, but in quite a few areas. One area that I don’t struggle with it: my homekeeping, alas. I could use a bit of perfectionism in that area. (We are having guests over next week for Thanksgiving dinner, and I’m already devoting lots of time each day to cleaning, that’s how un-perfect I keep the house.) 🙁 It’s a week and a half away, folks. For how many of you does it take over a week of hard labor to get your house clean? It does me. And I thank a merciful and indulgent God for my daughter, Amalia, who is such a good and sweet helper. Honest. Once she leaves home, I’ll just nail the doors shut. This place won’t be fit to have company any longer. True Confessions. I seem to be pretty good at those, too.

But back to doing things poorly. And, for a timely example, kale harvest and putting-by-for-winter.

I’m a big fan of kale. Growing it. Eating it. NOT using it to scrub my cast-iron pans, much as my dad would have you believe. 😉 This, I believe, is no secret to my Gentle Readers.

Kale is so good for you that every time I eat it, I feel like I’m giving my body about the best that I can give it. It’s so nutritious and full of antioxidants and cancer-fighting nutrients and whatnot . . . but I have written about kale before, and why it’s such a big deal to your body, and why it’s such a lucky break for us that it’s not considered just a salad bar garnish any longer.

I dump it in soups; I make lunchtime smoothies out it; I toss it willy-nilly into stir-fries, too. It’s such a great, easy side-dish, too, prepared very simply with onions and garlic and coconut oil (I’ll share the recipe with you at the end of this post, so don’t go away!).

I grow several varieties of kale–in lavishly excessive quantities–in my garden every summer. When it gets close to the killing freeze (kale actually is the last thing in my garden to freeze, another reason that it’s my friend) I scurry out and harvest as much as possible, and sock it away in freezer bags to use in soups and stir-fries and so on, all winter long. I try not to waste a bit of it.

Even my chooks chortle with delight when I pull up the spent plants that are too raggedy for our use, and heap them in their yard, on their ever-increasing deep litter pile. Here’s a picture, to prove it. Can’t you just tell how delighted these hens are, diving into that kale? 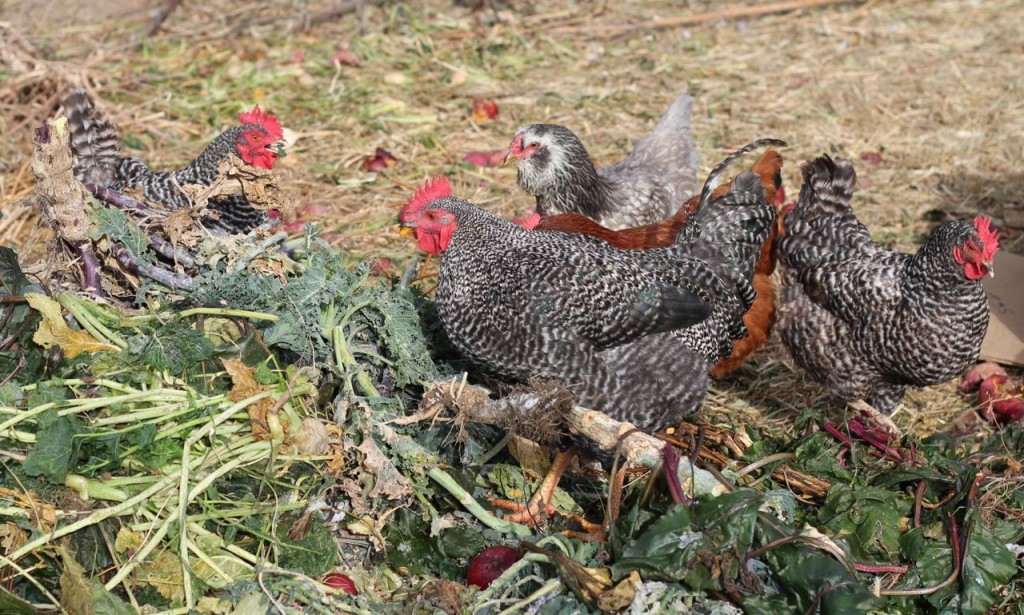 Which is why it was such a blow when I was away from home for a few days last week, when our lovely, temperate, golden and sparkling, blessed-by-God-Autumn turned into a cold, windy, devilishly-bitter Winter, overnight. I think the temperature plunged 40 degrees or more, and guess what?

My kale froze while I was away.

I was very sad: very sad about it, indeed, although I was so preoccupied by the fact that my big strong healthy son was flat on his back in the hospital with pneumonia, that I really gave it only a passing thought until several days later, when the son was (happily!) getting better, and I ventured out to the garden and saw it. Boo, thought I. My priorities (Getting Son Healthy was #1 on my list for two weeks, by far) had not been garden-related for sometime, so it was not surprising. But still.

The sudden and unsettling cold snap (I think they named it, even, it was so memorable!) dropped the temperature here in Nebraska from 60° to about 15° in one unlucky day. Now if I had been at home at the time, I would have had the kids out in the garden with me, watching the western sky, furiously cutting parsley and pulling kale and generally working wide-eyed against the clock and the wind and the plunging temps. Laughing inappropriately. I kinda love violent weather events. As long as nobody gets hurt or houses don’t go flying up into the air.

“Mary, Laura, come on kids, we’ve got to save our winter’s supply of kale against the storm!”

Afterwards, we would have changed into dry prairie dresses, hung up our handknit woolen mittens next to the stove, and had a sort of party inside, with hot chocolate and homemade buttered toast. And then, when we were warm again, we would have carefully packed all the goodies into the freezer.

Here’s our place. (Thank you Wikipedia.)

Or, rather, the root cellar. And Pa probably would have built two of them, had Ma asked him to. *snif*

But this didn’t happen, due to the aforementioned hospitalized-son incident. Furthermore, Bryan announced one morning that if I wanted my garden plowed, I’d better get it cleaned up that moment, so he could plow it and then put the snowplow on the tractor, because he was going to need it later that day. Time was of the essence, of course. It always is.

Our recently-acquired winter had decided to dump a few inches of snow on us, which was fine by me (as long as it’s cold, there might as well be snow on the ground, I always figure) but it meant that I had to schlep out to the garden toute suite and clean up the rest of the big plants (kale being among them), and put away the pepper cages that were still strewn around.

So I found myself out by the garden gate, barely able to move, since I was bundled up like the Michelin Man, regarding the kale plants sadly, and I realized that there was still good in them. They were frozen, yes, but those tough little leaves still looked good!

So I quietly went to work. I did my shabby best. It wasn’t perfect. I pulled up the plants, separating the better-looking ones (the “Raggedy Jack” variety, with its flatter, thinner leaves, were toast, but many of the “Scottish Curled” variety still looked wonderful) from the ones that had no life left in them. I hauled the spent plants to the chickens, and filled the wheelbarrow with the rest, and wheeled it to the house. 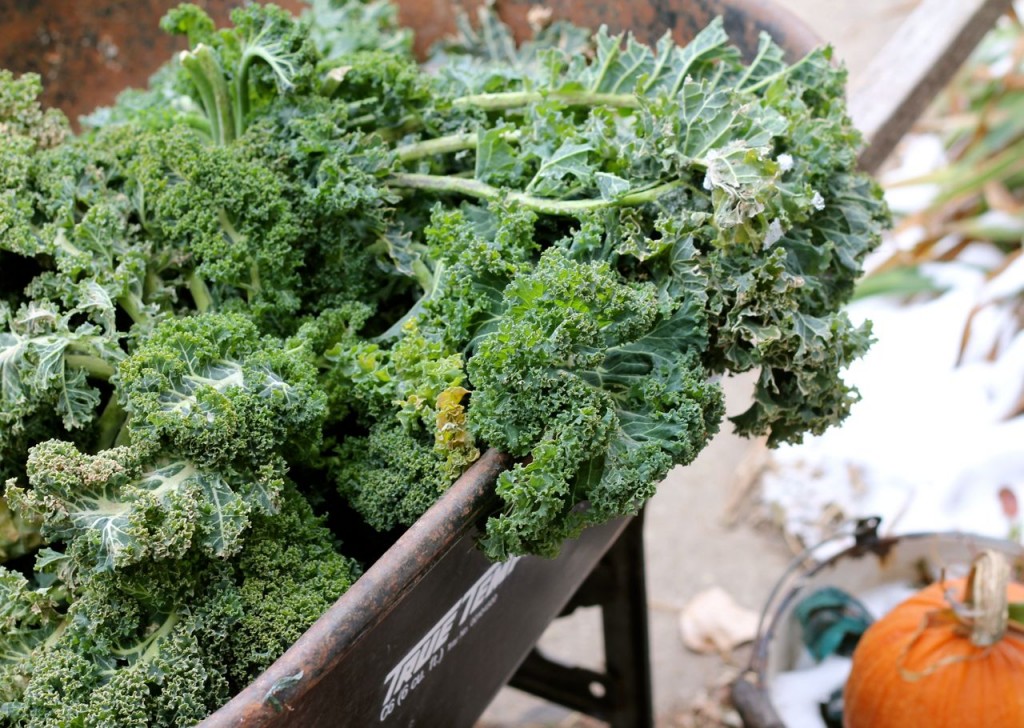 I just knew that I could find a tiny bit more space in my “magic freezer” to sock away a few freezer bags full of kale, which then would be great in soups or stir fries. Heck, probably even the freezing they had already been privy to made them sweeter. With any luck. 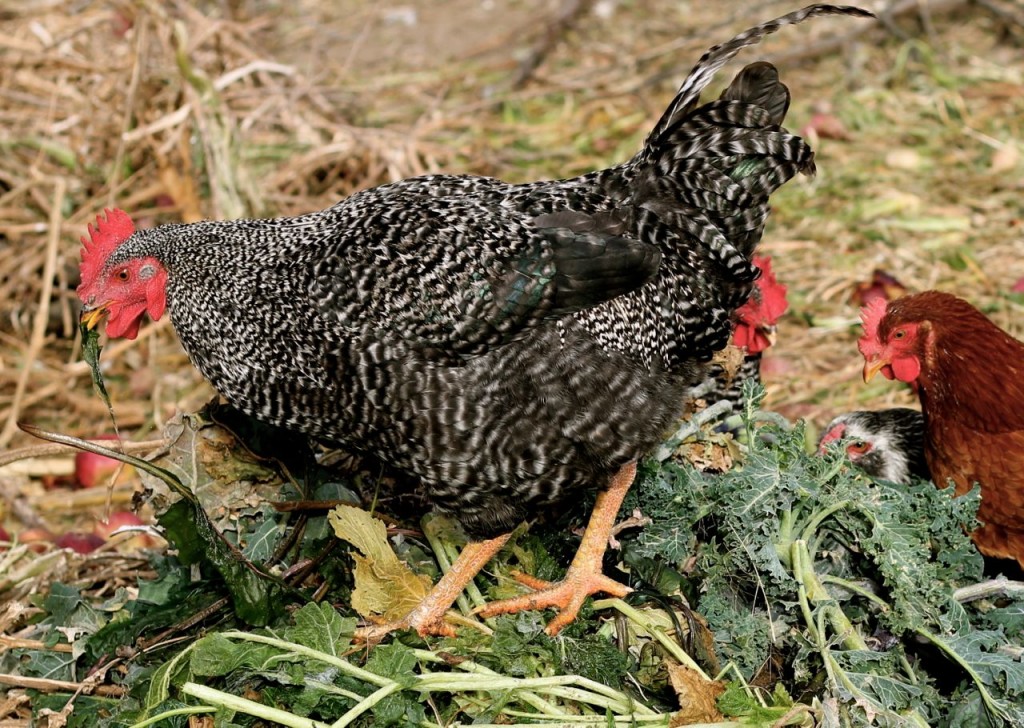 So that’s what I did. I did it quickly, sloppily, but I did it.

I hauled the good kale to the kitchen, washed it quickly, and then little Mack and I tore off the leaves that looked the best and stuffed them into freezer bags. My magic freezer–bless its cold, yet generous heart–opened up just enough space for me to press the bags into it. And my heart swelled with gratitude, for my God who knows how to tickle my spirit, and for one more gift from my garden. A few more meals of kale would be ours. 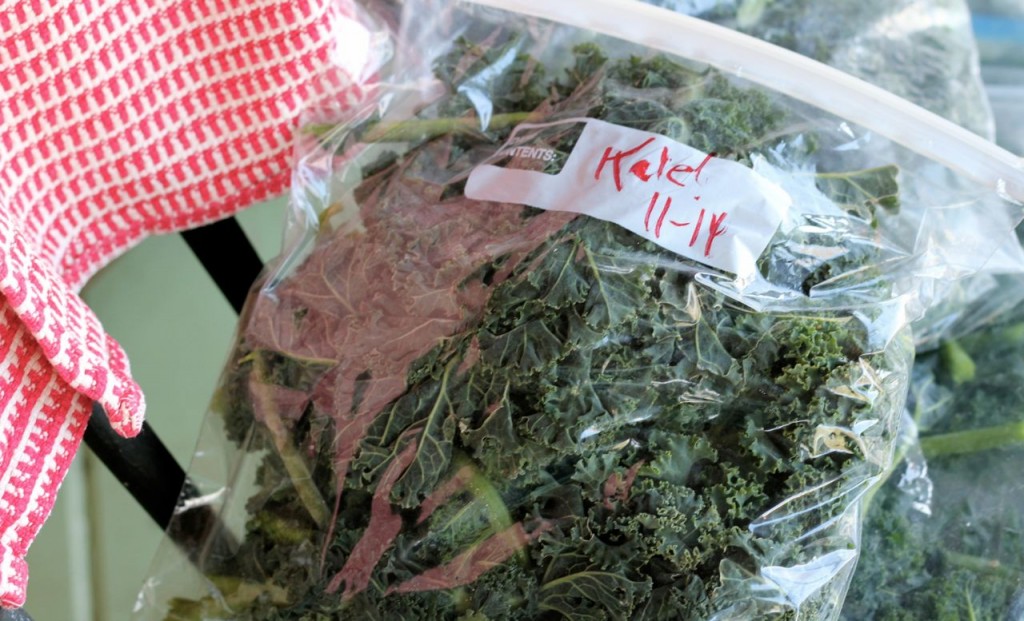 When I am in the big grocery store in the city, and I see those bitty bunches of kale in the cooler, marked “$300.00 a bunch” or something similarly redonculous, now I can just sail by. “Tra-laa! Still got kale in the freezer, lucky me!” Thanks to my big garden and big freezer (still need a second one, Bryan  . . . and no wink this time, I’m being earnest) I rarely have to buy kale at the store.

😉 <——this wink is not for my hoozband, who thinks I’m kidding about the second freezer and the homestead hogs next year . . .

This is what my garden looks like now, after Bryan’s quick plowing of it. *sigh* I’ll heap stuff on it all winter, the chickens will work it in, and the snow will soak into that earth, and by spring it will be ready to plant again. 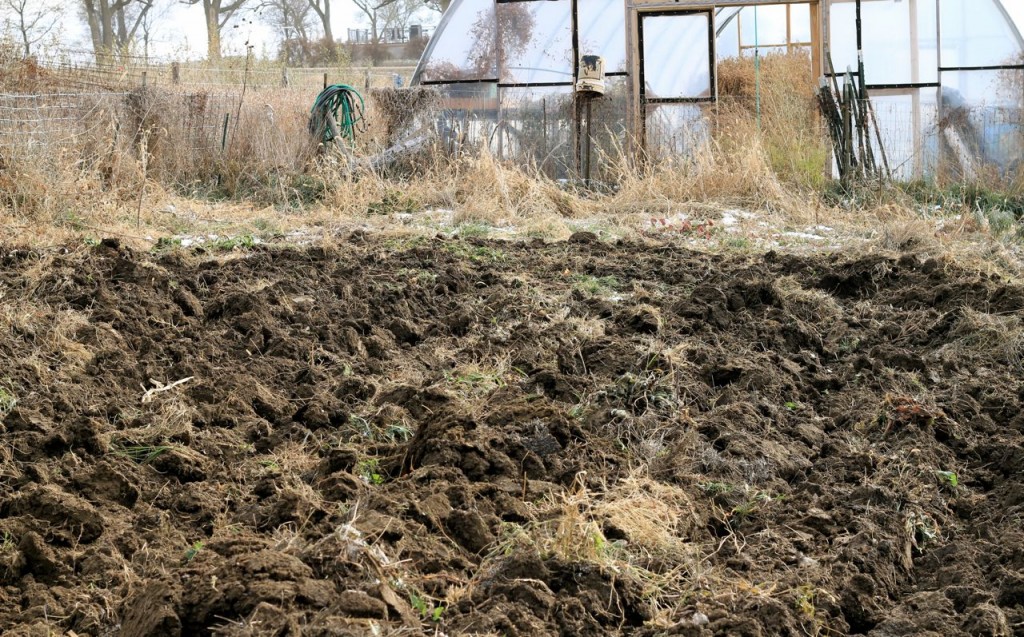 The seed catalogs, after all, are coming already (huzzah!) and I know that it won’t be long before I’m planting seedlings in flats in our library.

But wait, I promised you a quick and easy kale side dish. Here it is:

Better-late-than-never-last-minute kale
Cuisine: This quick dish is fantastic with nearly any meal.
Author: Amy at vomitingchicken.com
Prep time: 5 mins
Cook time: 20 mins
Total time: 25 mins
Serves: 6
“Start every dish with an allium,” asserts a friend of mine, and this one has TWO: garlic and onions. Sauteed kale and alliums goes well with chicken to fish to hamburgers to jelly sammages. Nearly anything!
Ingredients
Instructions
3.2.2802

That’s it, chickie! Dive in!

I’ll be sharing this post with the genial folks at The Prairie Homestead. Join me!

Oh, ALSO: are you  nearly out of coconut oil? I think the best stuff comes from Tropical Traditions and that’s where I buy mine. They are a reputable company and they have great sales on everything from raw honey to pastured beef to this delicious coconut oil. Check it out here!

Yum. I just love this stuff. I eat it off the spoon, no kidding.

Thanks for checking in again, Gentle Reader! *blessings*

Tagged on: can chickens eat kale?, how do I use coconut oil, how to freeze kale, preserving kale, quick and easy recipe for sauteed kale and alliums

8 thoughts on “Better late than never: last kale harvest of the year”