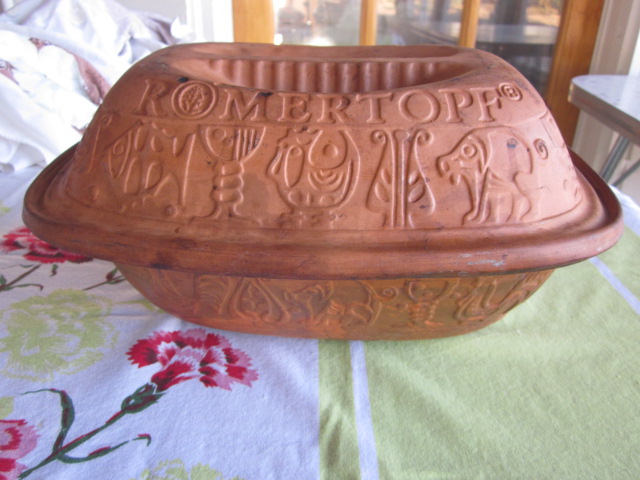 I stood in line at the grocery store this morning, behind a woman with about twenty TV dinners stacked up in front of her.  Well, that’s what we used to call them–you know what I’m talking about–those pre-made meals all packaged in a segmented foil tray, all ready for the oven: fried chicken with mashed potatoes and gravy or Salisbury steak with corn and green beans.  I think Mom indulged us (read: gave in to our piteous whining) exactly once and bought us the super-cool TV dinners that we craved.  As cool as the concept was, we realized (even at our young ages) that the food frozen in the flat box wasn’t even close to the quality or the flavor of the homemade meals that Mom made for us every day, and we didn’t pester Mom for TV dinners again.  Mom’s an excellent cook.  I could go on and on about this point, but I won’t at this time.

Back to the woman in the store:  I studied her carefully, as I do (my children will tell you with a groan) most people around me.  She was middle-aged and single, judging by her lack of wedding band and her cut of jeans, so I decided that she must be living out one of two scenarios:  1.  She was a writer of some sort, famous but living incognito among all of us, surviving on “Healthy Man” dinners until her best-selling novel (her eleventh!) was finished.  2.  She never had learned to cook, and–lacking a man and/or children to spur her on to culinary greatness–she just wasn’t that crazy about cooking.  She eats to live, not the other way around. 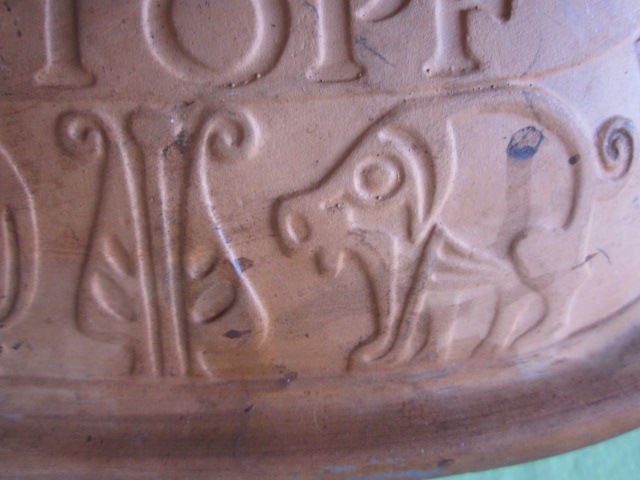 There are many brands of clay-pot cookers available, although I fancy the old reliable Romertopf. I’m partial to these adorable designs on the sides.

As I stood gazing at this woman, I felt my heart go out to her, because it was patently obvious to me that her mother didn’t cook dinner for her each night when she was growing up, as my wonderful mother did.  If she had, she would never be able to settle for these mediocre freezer meals, novel-to-finish or no.  This woman-of-the-poorly-fitting-pants had missed out on one of the greatest joys in life:  eating really delicious food.

Mom had many indispensable tools in her laboratory of a kitchen.  She was (and still is) always testing, experimenting, tasting, evaluating.  One of her favorite ways to cook certain things was in a Romertopf clay pot.  Many years ago, since she had accumulated several of the pots, she gave one of hers to me.  In the same way, I gave each of my daughters-in-law a clay cooking pot for Christmas this year.  I had been amazed to see so many of them show up at our favorite thrift store, brand-new!  Never used! I expect they were gifts to cooks who didn’t get or understand clay pot cooking. I am delighted that my sons married young women who are passionate about eating well, and they both seemed delighted with their new cooking pots.

Clay pot cooking, in case this is a new concept to you, is a technique of cooking food in an unglazed, lidded clay pot that is first soaked in water, so steam is released during the cooking process.  The technique actually has been around for thousands of years, going back, at least, to ancient Roman times, and is even now still used in Africa, many parts of Europe (the Romertopf brand of pot comes from Germany) and Asia.  Well, and in Milford, Nebraska, also (ahem!).

You can cook many things in a clay pot cooker, though I tend to use mine primarily for roasts and chicken.  I bought a new clay-pot cookbook, however, and I’m planning to thoroughly investigate what else I can make in my Romertopf:  Greek Breast of Lamb, anybody?  Middle-Eastern Stuffed Peppers?  Athenian Moussaka or Lasagne?  It appears that one could cook a great deal more than just your roast beef or chicken in this versatile cooking pot!

I pulled my Romertopf out a few evenings ago and made a new recipe that I found in my new clay-pot cookbook:  “Beggar’s Chicken.”  Although I cooked a very large bird, and there were only three kiddos home that night, we devoured the entire chicken down to the well-polished bones.  Once we started eating, all conversation ceased.  It was so delicious, that we didn’t want anything to take away from the downing of that bird. 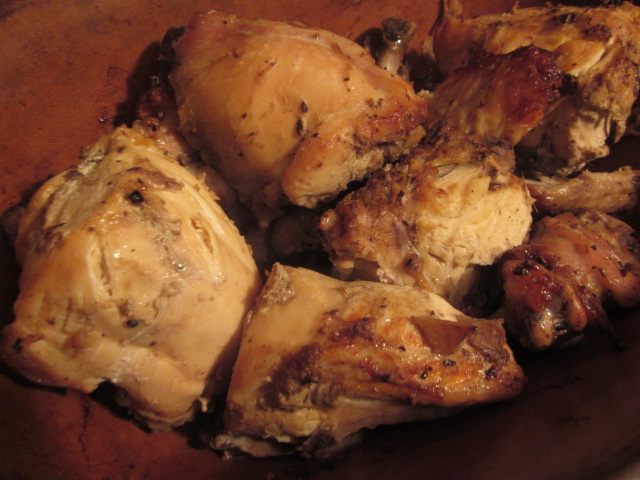 Can you see how moist and flavorful this chicken is? I guess you’ll just have to take my word for it.

Do you have a clay cooking pot gathering dust in the back of your cabinet, or perhaps have you seen them at your local thrift shop and wondered what they were for?  Well, you’re in luck–I’ll include that chicken recipe right here for you.  Enjoy!

Beggar’s Chicken
Recipe Type: Chicken
Author: Clay-pot Cookbook, adapted by moi
Prep time: 6 hours
Cook time: 45 mins
Total time: 6 hours 45 mins
Serves: 4
I prepared this chicken with roast carrots and steamed rice, and it was universally lauded as being the Best Meal Ever by the other diners (my children).
Ingredients
Instructions
3.2.1215 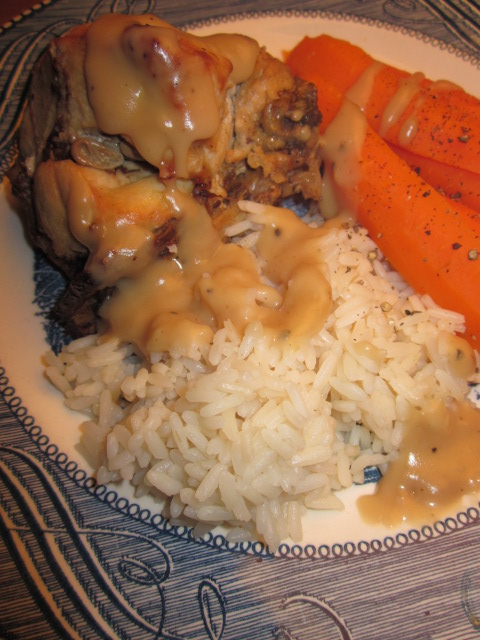 Now you really want to try this recipe, don’t you?

One thought on “Everything that was old is new again: Romertopf cooking”