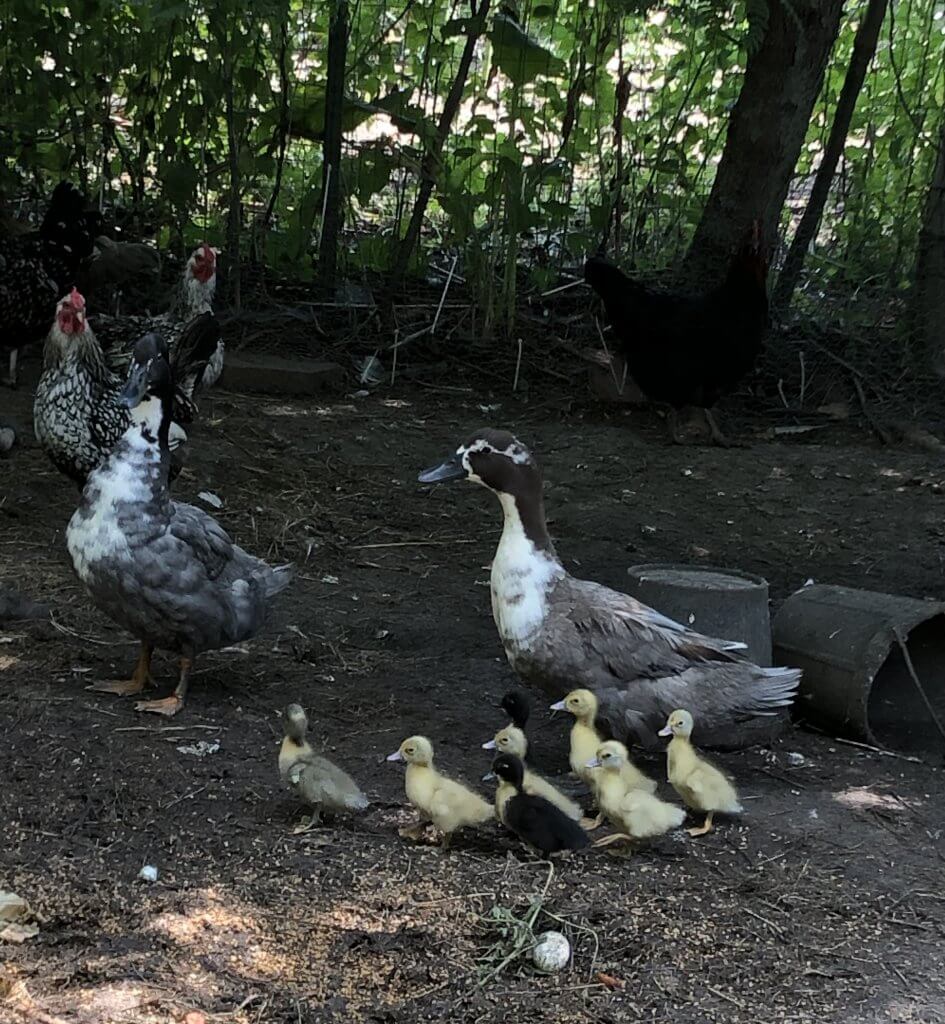 You can’t see it easily, but Papa duck does indeed have a head.

There comes a time in every farm woman’s life, if she’s not especially careful, when she might be crippled by one of her livestock, albeit, hopefully, temporarily. It happened to me and it was unexpected, quick, and extremely painful (as many crippling incidences are).

With luck, it only happens once, as the farm woman learns her lesson quickly through crippling pain; the lesson being Respect the Mama Animal.

Since I can already imagine your raised eyebrows and short guffaw of laughter (Mack’s reaction when I told him about it), I’ll share how it happened, as proof that I am not making this up.

I’ll start at the beginning.

A friend of my sister, a sister-farm-woman, had a duck family–a mama and papa with a freshly-hatched batch of ducklings–that she was looking to re-home. I’ll admit right now that the reasons she stated that led to wanting to find a new home for the duck family were vague at best (something about flower beds?), but it didn’t matter a whit to me. I didn’t think twice. I had been trying to encourage my own duck pair, Marguerite and Sir Percy the Second, to hatch out their own family all summer, to no avail.

Following is an explanation of the reason behind the phrase “to no avail.”

Our Marguerite’s genius brooding modus operandi goes like this:

This duck mama, on the other hand–whom Mack immediately named “Nori”–had successfully hatched out eight ducklings, at her farm. Against many odds, no doubt.

So. Frustrated as I was by my drama queen duck Marguerite’s inability to settle long enough to hatch eggs (not to mention to lay any in the first place), the words weren’t out of my sister’s mouth before I accepted this duck family. YES I’LL TAKE THEM! said I, happily, and I hurried to prepare my little coop nursery with all the necessary accoutrements (water basin, waterer, feed, fresh hay, and a nice pile of greens) for a duck family to hang out for a few days until the ducklings were big enough to go out into the world (the chicken yard world, that is) with their parents.

Why all the enthusiasm, you may ask? That is your part. It’s just . . . some ducks, right?

Gentle Reader. There is nothing–nothing–as cute as a batch of ducklings with their Mama and Papa. Mama duck leads the ducklings around, as if on a string, while Papa enjoys his “me” time. Of course any baby animal, for me, is an easy YES. YES I’ll take it; YES I’ll love it; YES I’ll take another one. Or two. Or three. Or eighteen. 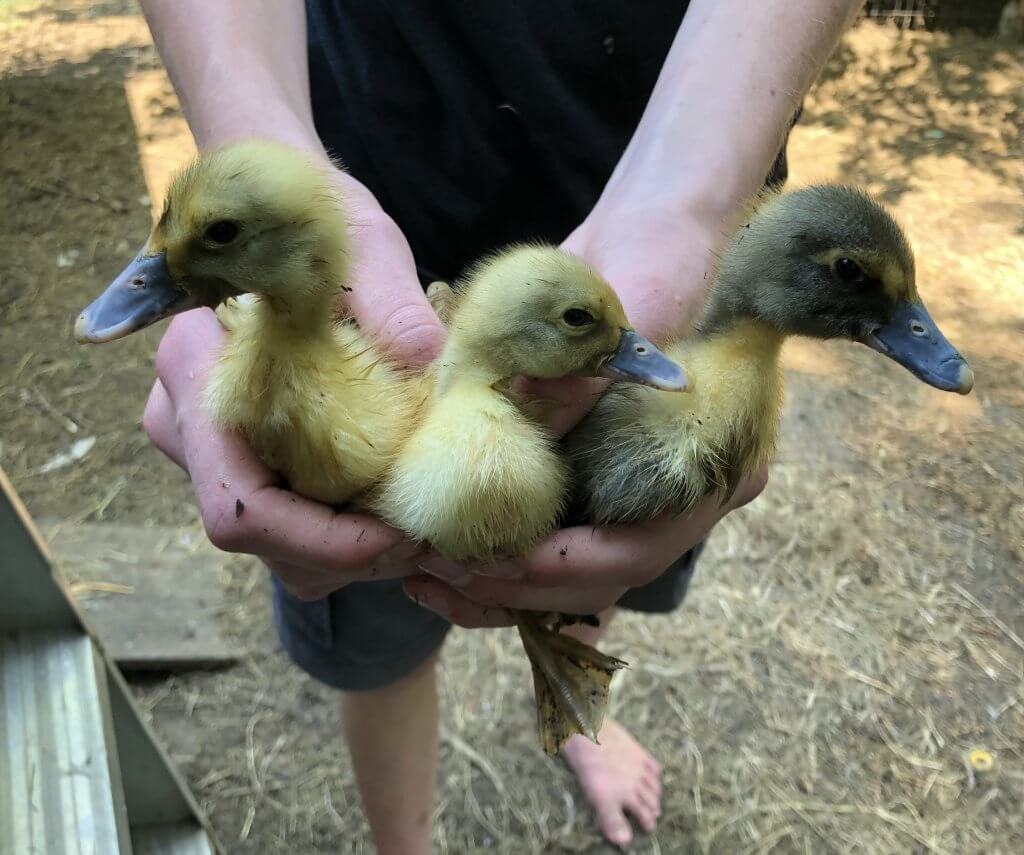 Can you blame me?

My sister showed up later that very afternoon with an enormous cage with mama and papa and eight adorable ducklings. I loved them on sight. ON SIGHT.

We loaded the cage onto a wagon and pulled the entire shebang out to their new home.

In retrospect . . . maybe I should have paid better attention as we hauled them out to the coop, as Anne rambled on about how difficult they had been to catch, that the mama was “a tad fiesty,” etc. But I was marveling at the cuteness of the ducklings–their miniature little blue bills, their webby, dear little feet.

Did I mention that their little bills are mostly blue? So. stinkin’. CUTE. 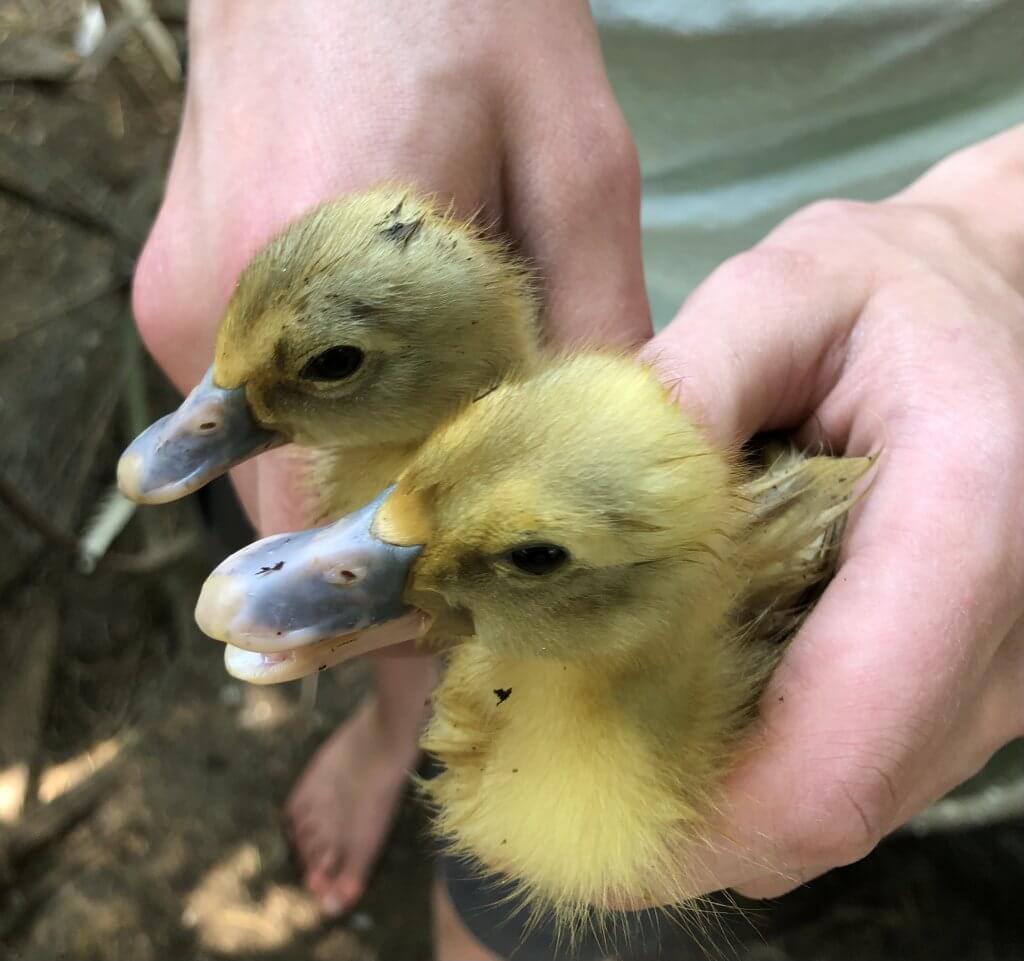 I have a soft spot for blue animals. One of my favorite chickens of all time was blue.

Transferring the duck family into the coop went without incident. I thanked my sister profusely. Yay! Our duck population had gone from 3 to 13 in one fell swoop! I was so happy! They were content in the nursery, and I wasn’t in a hurry to usher them out into the barnyard just yet. I’d give them a few days to grow a little.

A couple days later, a friend asked if he could come see the new duck family. Come on over, said I, unwittingly opening to the door to the crippling incident. I was as anxious to show them off as my friends were to see them.

The day for the visit dawned. I could still walk without a limp, on that day. At the beginning of the day, that is.

When I led my friend out to the chicken yard to see our new duck family, I saw that they were not at large in the chicken yard, though I had let them out of the nursery that morning. They were, in fact, taking a break at that moment and were inside the coop. It was a hot day, and after all it’s still a free country, at least for ducks.

I went into the coop to herd the family out. Now herding ducks is about a million times easier than herding chickens, which as a matter of fact is not in the least bit possible, basically. I’ve taught my chickens to come to me when I call them (if you ask pretty-please, I’ll consider posting a video of this phenomenal skill) but if you try to herd chickens, on the other hand, they’ll just fluff up their feathers, run around like crazy people, jump, fly, and squawk every-which-way.

But ducks, on the other hand. Ah, the ease and joy of herding ducks. You stand near them. You lift one arm and they go the other way. You lift the other arm and they take off that way. Then you apply pressure (in the form of an outstretched arm or stick or rake) and they automatically and amazingly go the way you want them to. It’s fun. Like a game! Moreover, they are so dependent on each other that they stick tightly together. Unlike their more independent cousins, the chickens.

But back to the inside of the coop. There I was, trying to herd this little family out the door. (Papa was already outside, enjoying one of many leisurely dips in the pool that day.) Mama was quacking at me loudly, and brandishing her wide-open bill at me.

How ridiculous are you?, thought I, amused. Sorry, ma’am, but I’m not afraid of a duck, is what I was thinking as she waved her bill around at me for all she was worth. I might have actually said it to her, even.

“Quack, quack, quack quaaaack—“ she spat out, advancing on me menacingly.

“I’m not afraid of you,” I said, with another chuckle, not the slightest bit afraid. “Good try, mama. I admire your resolve, but you don’t even have anything sharp in that bill . . . like, say . . . TEETH?”

A rooster with those long spurs? If one gets a little uppity with me, I respect him. We don’t allow mean roosters on our place, but if one gets an attitude, he has my respect. And a quick detour to the soup pot, as a matter of fact.

But a mama duck? I found myself wishing that Mack had been in there with me, as we would have chuckled together over the ridiculousness of this mama duck threatening me . . . . Oooh, we are so afraid! We might have laughed. Look at you and your bad self, mama duck! Whatcha gonna do, club us with your big bad toothless bill? 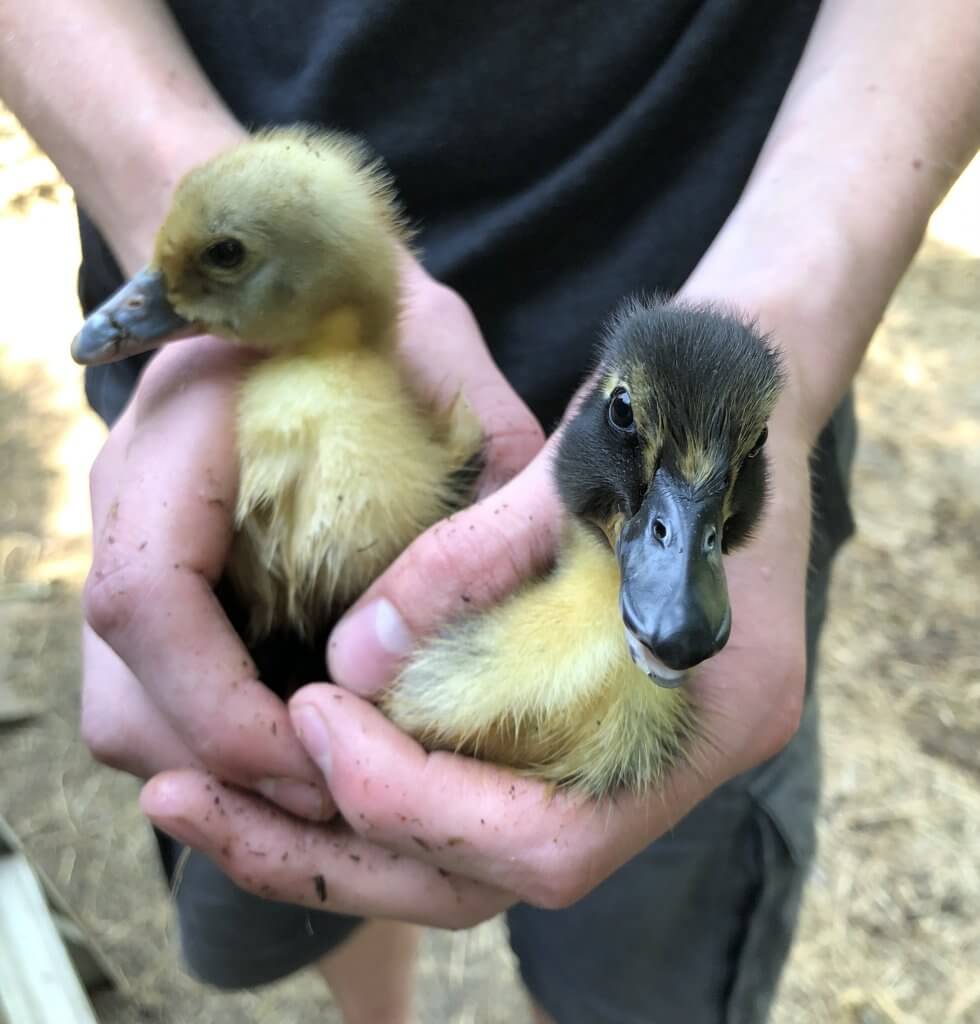 As Nori tried her best to intimidate me with her silly toothless bill, the ducklings were darting this way and that, peeping loudly, causing her to be even more alarmed. She led them underneath the nesting boxes, hiding next to a broody hen who wasn’t going to move a muscle, no matter what. (Rowena. Bless her.)

I couldn’t see them, hidden underneath the overhang of the nesting boxes, but I knew they were there. Feeling a little impatient, as my friend waited outside, I nudged my foot underneath the overhang of the nesting boxes, in the vicinity of where they were huddled. Gently, gently. I didn’t want to harm one of the ducklings, nor Rowena, of course. I was just hoping to apply a little pressure with my foot and encourage them to —

And that’s when it happened . . . Nori clocked me–hard!–very hard!–on my ankle bone. With that dull, toothless bill. Like a hammer. On my bony ankle. (One of very few areas of my body that is not nicely padded, as a matter of fact.) The pain from the impact was surprisingly sharp, and I cried out and doubled over in pain, and at the same time hopped backwards. I was totally shocked.

I had been crippled by a duck.

After a few moments of non-cursing (if I were a curser, I would have had a few choice phrases to direct at that duck!) and jumping up and down (on the non-crippled leg) and moving (hopping) out of the way of the duck family, I recovered enough to grab a stick and do the duck-herding from a safer distance. I did get them out the door, after a fashion.

And, wincing in pain, I managed to make my way out of the coop to admire them, from a distance, with my friend. I was going to be okay. The crippling was only temporary.

But the important thing was that I had learned my lesson: Respect the mama duck.

p.s. I have to add this: given the choice, I’d much rather have a rah-ther fierce mama duck like Nori than a fiddle-dee-dee careless mama like my hen Freya. I was so tickled when she hatched out three chicks in a hidden nest in my hoop house earlier this summer! How clever, thought I. How wonderful. What a good mama she will be. But within days of hatching out the sweetest little chicks, she did the unthinkable: she abandoned them. They followed her around, peeping pitiously, while she ran the other way. As quickly as she could. So. Give me the fierce (but faithful!) mama, any day!

Even if it means I may be crippled now and then. (Temporarily.)

More about ducks, if you’re in the mood now and want to read more:

Thanks for popping in, gentle reader.

10 thoughts on “Crippled by a Duck: a True Story”