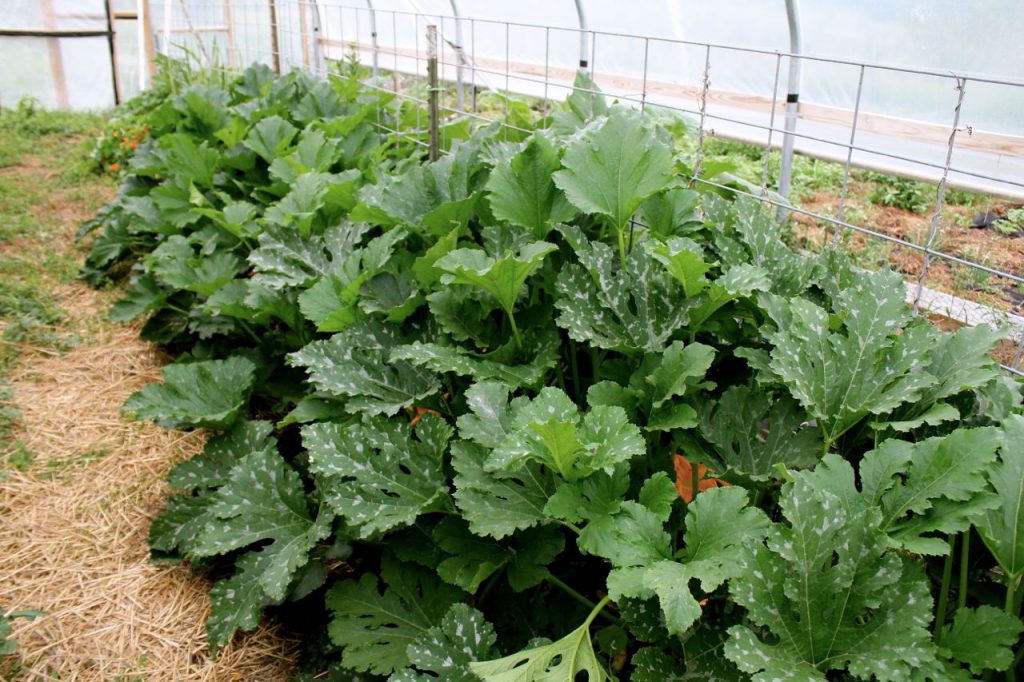 Do you grow cucurbits in your garden, and do you live in the Western Hemisphere?

If you don’t live in the Western Hemisphere, you may still want to read this post, since you never know when these nasties will make it over to your enviably-squash-bug-free part of the world, and show up on your pumpkins or squashes. It might happen. How clever your neighbors will think you, if this happens and you’re already armed with knowledge which will astound others in your sphere: what the doggone pests are, and how to get rid of them. And all this, without resorting to nasty pesticides that could harm your dog, the local honeybees, and perhaps even you.

(By the way, the term “cucurbits,” in case that word is on the edge of your working vocabulary, refers to melons, zucchinis, squashes, and pumpkins).

The infamous Squash Bug (there are over 1800 species that fit under the genus Coreidae–1800!!) is the most serious pest for squash and pumpkins in the U.S. and is a potential problem for all cucurbits. If you’ve ever noticed squash bugs in your garden, you’ll know that they damage plants by sucking juices from the leaves and fruit. What you may not realize is that they also inject a nasty toxin that can cause a plant to wilt, blacken, and even die.

Squash bugs are easy to identify, as are their eggs (laid in orderly rows on the undersides of leaves) and nymphs (soft-bodied and grayish, in clusters on the bottoms of leaves). Adult squash bugs are about 5/8″ long and are dark brown or mottled in color. They are hard-shelled and give off a nasty smell when squished. They also have an unnerving practice (in my opinion) of scuttling about when you are aiming (with a gloved finger) at squishing them, and they also have an unsavory habit of clustering about in mating couplets everywhere in your squash plants. In the daylight. In front of the children, and everything.

So that’s the bad news. The good news is: with a bit of work and a bit of planning and some sleuthing and decisive action (is that too much to ask?) you can rid your garden of squash bugs, and keep your cucurbit plants growing and thriving and producing wonderful edibles for you until the natural end of the season.

So let’s get started. Your first line of defense is preparation of your next year’s garden bed in the fall.  Squash bugs will overwinter in garden debris, certain types of mulch, and pieces of boards or other detritus that may be lying around your garden. So, cleaning up the garden in the fall is very important. If you have a serious squash bug infestation this year, don’t work the affected plants into your soil, but remove them and bundle them up and toss them out, or burn them. I know this is a hard call for serious organic gardeners, since you really want all the nutrients and organic matter that you can find tilled into the soil. But remove the affected plants, you must.

Your second line of defense is to do the aforementioned sleuthing, in searching out the squash bug eggs on the bottom sides of the leaves of your cucurbit plants. They are easy to find. You may marvel momentarily at the glossy little brown eggs (as do I), laid in such orderly formations, but then you must not get attached.

Nay. You must squish them to smithereens (being careful not to harm the leaves) and wish them a not-fond “Adieu.” If you destroy the eggs, of course, the squash bugs cannot hatch. Ergo. No squash bugs. 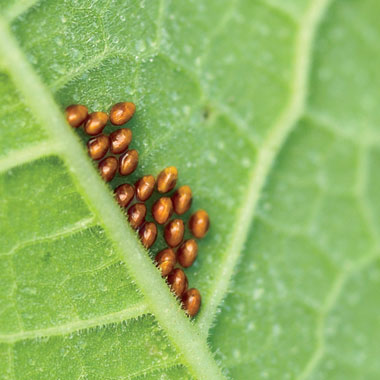 It really is amazing, how orderly these eggs are laid. We all could learn a thing or two from the compulsive order displayed by the squash bug, could we not? Well. At least I could (cough).

A third line of defense, (and something every organic gardener will generally try to do anyway), is to be hospitable to creatures in your garden which will eat nasty bugs such as the squash bug, just in case you miss some of those eggs.  Just this very morning, Gentle Reader, little Mack came running to me with a jar in his hands, very excited about something that he had caught. It was a praying mantis.  Praying mantises, of course, are a very picturesque and beneficial creatures, and I wholeheartedly encourage their existence on our place, especially in my garden. 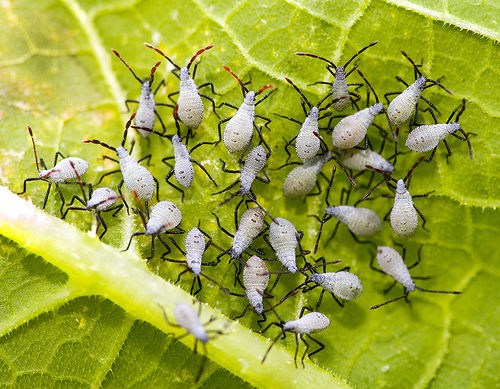 YICK! Anyway, little Mack and I carried that praying mantis out to the garden, and found right away a plant with a bunch of nymphs creeping around on the underneath of a leaf.  We set the mantis down (it was a very pretty one, by the way, kind of a pearly color and had a charming habit of tilting its little triangular head at us) near the nymphs. Snap! It grabbed a nymph and ate it, right then and there. We were thrilled, to put it mildly. 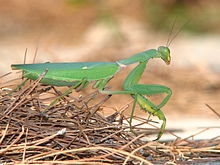 Of course, if you perhaps miss a cluster of eggs now and then, and therefore have a few squash bugs and/or their creepy nymphs which are giving you fits in your garden, there are things you can do to control them.  I’ve read of several solutions that I’ll share with you. 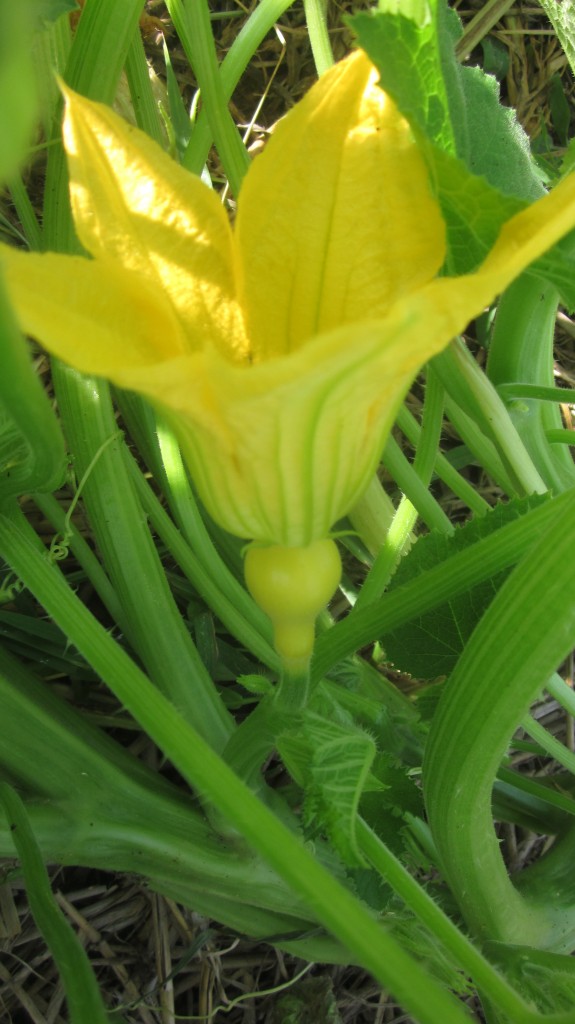 See the infant lemon squash, still attached to the blossom? Isn’t it cuuuuute??

3. Choosing varieties that are known to be more resistant to squash bug damage is an important step in avoiding this insect, too.  For example, acorn, spaghetti, and zucchini squashes have been found to be quite resistant to squash bugs, where most summer squashes (yellow crookneck and straightneck) are very susceptible.  I’ve been growing lemon squash for several years, because it seems to be less susceptible to the squash bug than other summer squashes. Plus, it’s delicious and so cute, to boot. Don’t you agree? 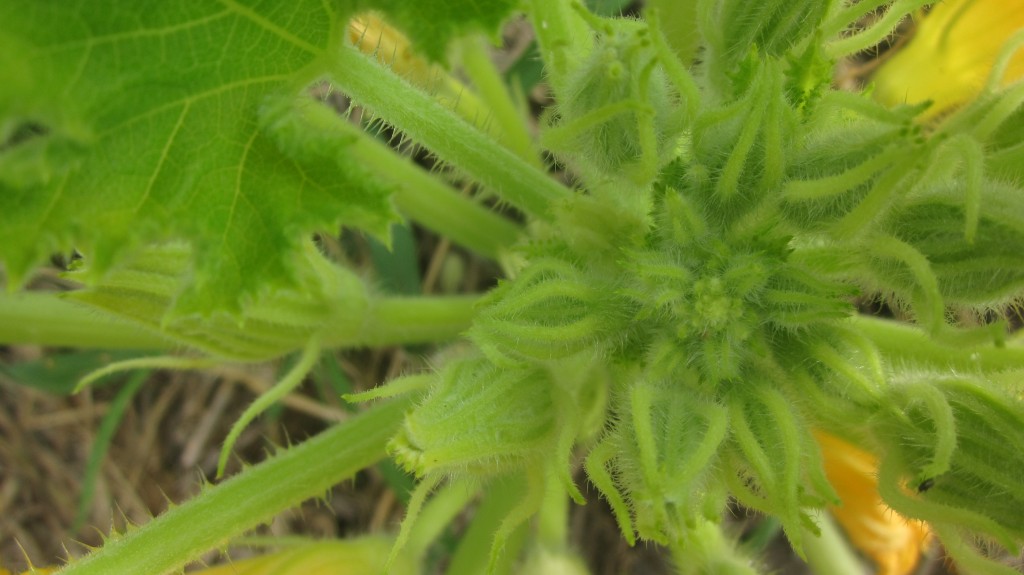 Here’s my squash plant with a cluster of soon-to-be beautiful blossoms. I couldn’t resist taking this picture, I thought it was just so lovely.

So there you have it, Gentle Reader. Everything you ever needed to know (and a few things you didn’t) about squash bugs and how to control them without sprinkling that toxic dust or spraying that stinky pesticide willy-nilly. As I was out in the garden the other day, searching out little clusters of eggs and squishing little disgusting nymphs, I couldn’t help but notice the plethora of honeybees, pollinating the squash blossoms. 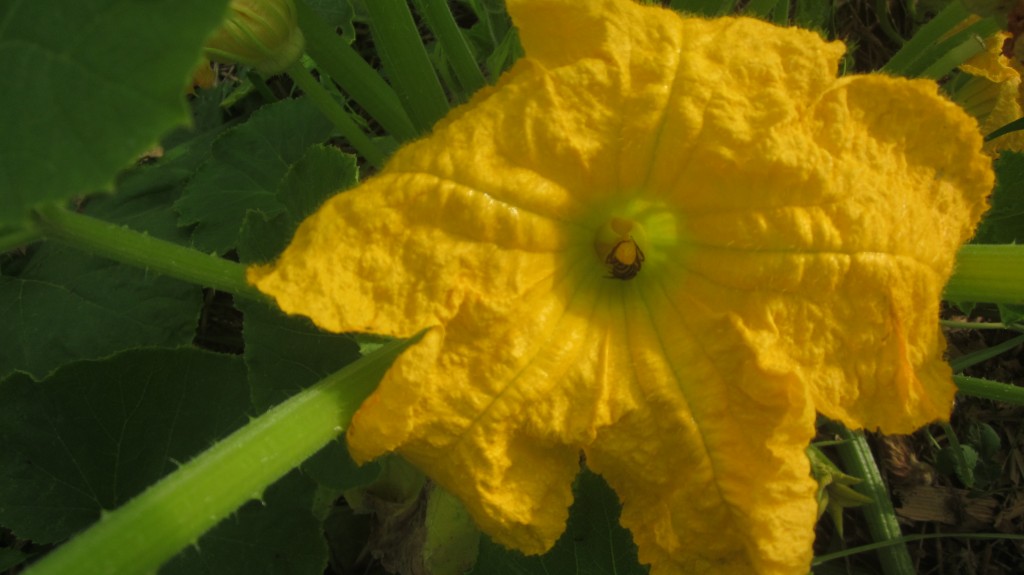 The honeybees were quite busy collecting pollen from the squash blossoms! Can you see the little lady in there?

In this day when unfortunately we are struggling in the U.S. to keep our numbers of honeybees healthy, and when there are so many factors that we have no control over which are threatening the honeybee population, I’m glad that there are ways to control pests such as the squash bug that won’t harm the honeybees.  Aren’t you?

Thanks so much for popping in, and do come back. I invite you to enter your email address above, so you catch every post, and you may want to “like” my vomitingchicken.com Facebook page, because we exchange a lot of tips and tricks and whatnot over there, too!

36 thoughts on “GOT Squash Bugs in your garden? Eradicate these pests . . . naturally!”