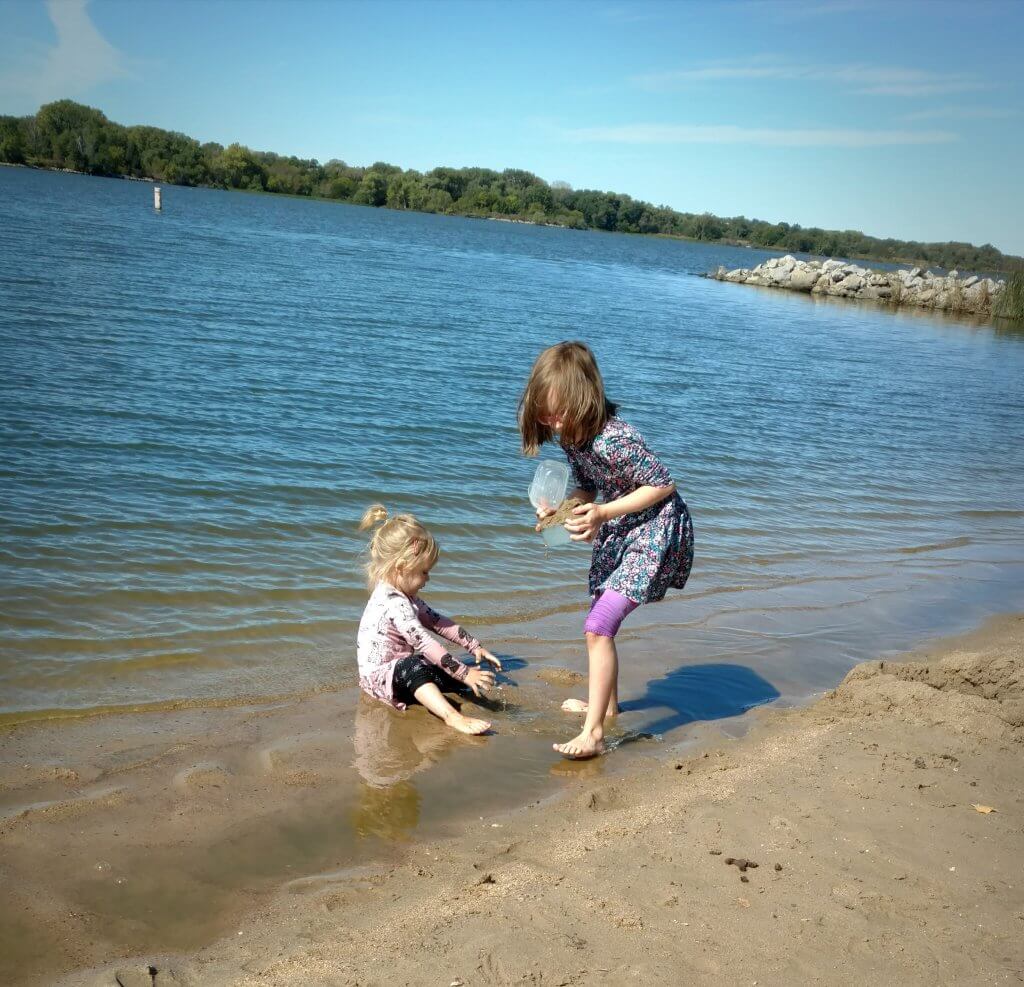 Girlies at the lake, on a warmer day.

First, a disclaimer with the feelings of my children and grandies in mind: my love for all my littles (and bigs, and in-betweens) knows no bounds. This much, I hope, is irritatingly obvious. Now and then I write about one in particular, and this is one of those times. If you’re hoping for a new Christmas cookie recipe (that’s coming next week) or a chicken-raising tip, probably you’ll want to check back. 🙂 Thank you for your (kind) indulgence.

When my grandie Ellie catches sight of me, her face lights up as if I’m really something and she raises her arms to me. She stands on her tippytoes and stretches up, up, up . . . for me to lift her into my arms. On her sweet face is utter adoration: no judgment, no disappointment, no demands . . . just pure devotion. She loves me. Totally, unconditionally, no matter what. Period. What an excellent gift.

I’ve done nothing to deserve this love, except to place myself into her orbit. She is a real lover; she is good at loving others, and there are days that I happen to be the lucky one who gets to receive that love.

If you are a parent, you know that parenting is a tricky endeavour. If you’re not a parent, you probably have observed that this is true, as well. Kids get sick–sometimes really sick–and you drop everything to care for them until they are well again. Sometimes they don’t do what you want them to do, despite it all.  You sacrifice sleep, money, resources for them, without hesitation. There are times you can’t sleep because you simply know that one of your children is not sleeping. Parenthood is an exhausting and often thankless job . . and then, just as the kids are getting old enough to bless you for your efforts, they get ideas about the way they want things to be.

And that begins with not living under your roof any longer.

They quietly pack up their things and flee . . . I mean . . . move away. It feels like fleeing. It looks like fleeing. One of my children said this to me: “Don’t take it personally, Mom. I’m chafing. It’s not really you.” It wasn’t me. He just didn’t want to be anywhere near me any more.

Another one . . . the sweetest kid you could imagine packed up overnight, leaving all his childhood possessions in a big tidy stack outside his bedroom door. “You can just get rid of all that stuff, Mom,” he said, breezily, over his shoulder, as he walked away, carrying a precious small amount of luggage with him. I walked past that pile for days and fought the tears, heartily castigating myself: Helicopter mom! Miserable co-dependant! Get a life!! What’s wrong with you??

But . . . why would he want to throw away his childhood? Were those years that miserable? (I didn’t toss it all, gentle reader. After a time, I went through it, bit by bit, and packed away the things that I thought he would eventually want, after all. It was a balm for me, and since then he has come home looking for those things. So there.)

You can see and feel the irritation growing, from the, ah, challenging pre-adolescent years onward. There are delights, too, of course–plenty of delights–to buoy you, to carry you as you watch these awkward, jerky growing pains. As the caterpillar develops, oh-so-slowly, into a butterfly: surprising new talents, personality quirks, sweet heart issues . . . they get you through the awkward bits.

I have six kiddos, five of whom have flown the coop, so I could tell you a bunch of these stories. But  I’ll spare you (and them) and anyway, that’s not the point of this post.

A friend with children older than mine once told me this: “God allows your kids to get increasingly irritating as they grow up, so you are ready to bid them farewell when the time comes.” She insisted that the heartbreaking, slavish adoration a mother feels for her baby would eventually segue into an irresistible urge to push the dang squawking fledgling out of the nest.

Only, for me, it didn’t work that way. Maybe my kids weren’t as irritating as hers (though I kinda doubt it). Maybe my identity was too much wrapped up in my mothering role. Maybe I just needed them more. Probably. Possibly?

With six children, how could it not be? Mothering is the only thing I did really well for decades; I really worked at it. I read books. I prayed constantly for and about my children (still do).  I put my entire self into that role, figuring that if I messed it up, the regret would be there in my heart forever.

So this is what happens next: the irritable, snappish 18(ish)-year-old packs up and tools away, to college or whatnot, and you wring your hands over the fate of this half-grown human that you love more than you love yourself. If only you had had one more year . . . one more month . . . if only . . .

Then, after your heart is finally beginning to heal after being cruelly ripped in two, things begin to change. Slowly. He or she grows up a little, learns some difficult lessons, and one day comes home and looks at you with something akin to–not admiration, no, but quite possibly . . .  a slowly growing acceptance.

Incredibly, he comes home one day and utters something shocking like “I would like your opinion on xyz . . . “ Your mouth drops open (figuratively, because you know it would irritate him to the dickens if your mouth really dropped open) and you allow the tiniest flutter of . . . hope. You hope that–in his mind, at least–you aren’t really the inept loser that he had grown to believe that you were. Maybe you do have value to him still, after all. Maybe he still needs you. That is your hope.

Then . . . he brings home somebody very lovely and special, who puts up with him and with you, too. A few years afterwards he hands you the second-most beautiful baby you’ve ever had the privilege to look upon (he, of course, was the most beautiful and never forget it) and if you’re extremely lucky, he won’t hie his new family off to the Yukon or some Godforsaken hinterlands so you’ll rarely be able to visit. If everything goes well, in a few years he may hand you another one. And then another.

This is the reward, parents, not for your doing anything particularly smart, but for just hanging in there, with your hands out, your heart invested, and your sanity intact. Well, okay, you’ve got to do something right, in order to keep the kids coming back home.

If you mess up royally, they’ll not want to come home and then you’ll miss out on this. 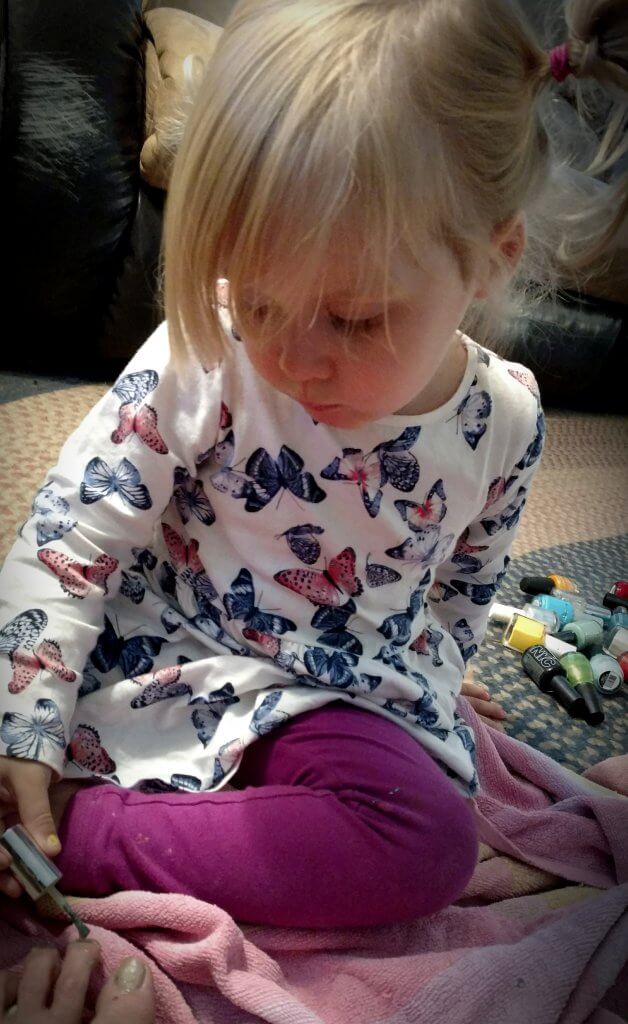 Never before have I had such a loving pedicure.

One more thing, and then I’ll let you go. Mack and I took a lot of bike rides this summer, and I had a bad bike wreck during one of them. I was riding too fast and . . . and I just wiped out. First: it could have been worse. I had feared this sort of wreck (I do love to go fast) but never had actually had one. Second: I slid across the cement on these touchpoints: the back of my hand, my wrist, my knees, my elbow, and several spots on my face. It wasn’t pretty. The bike survived (except for the basket on the front) and I survived as well. But I was a real mess of bruises and ugly scabs for several weeks.

Ellie and her lovely big sister Anya came to live with us for a time, soon after that crash. The first time she saw me with the scabs on the bridge of my nose and on several places on my face, she climbed up into my lap and sat quietly, studying them, tenderly touching each one. A butterfly touch. Then she asked for the story, and she had to see every place that was sore, very very gently touching each one, shaking her head and quietly clucking her tongue.

And even now, though it has been months since that day and all the scrapes and bruises have long ago healed, she still studies my face whenever she sees me, and talks about that crash.

She will cup my face with her soft little hands and gaze up into my eyes with such love that it puts a lump in my throat. “I love you,”  she’ll say. I will want to cry with gratitude, because I know that she really does. This girl doesn’t see her Amma’s faults, her too-rapidly increasing gray hairs and wrinkles, her loss of a waistline or anything else disturbing that I see. She loves me the way I am, 100%.

She doesn’t expect more of me than I already am.

This then is the true picture of unconditional love, and surely the reason that Jesus said “Let the little children come to me, and do not hinder them, for the kingdom of heaven belongs to such as these.”

The kingdom of heaven populated by little ones with this pure love and unconditional devotion? Sounds good to me.

So, gentle readers. If you are struggling with a hundred little challenges in raising little ones (or big or middle-sized ones), and you will, if you haven’t already–here’s my specific and profound words of advice: hang in there. Do your best. Don’t be too discouraged. As my sweet mother-in-law used to say “It’s all part of it.” All us parents go through it. With any luck, there will be rewards to come.

And in this humble blogger’s opinion, the best reward for raising littles are their littles–priceless gifts wrapped up in soft blankets and smelling faintly of milk, and handed to you.

What amazing gifts. Nobody really can imagine them until they have them, and they are a suitable reward, in my thinking.