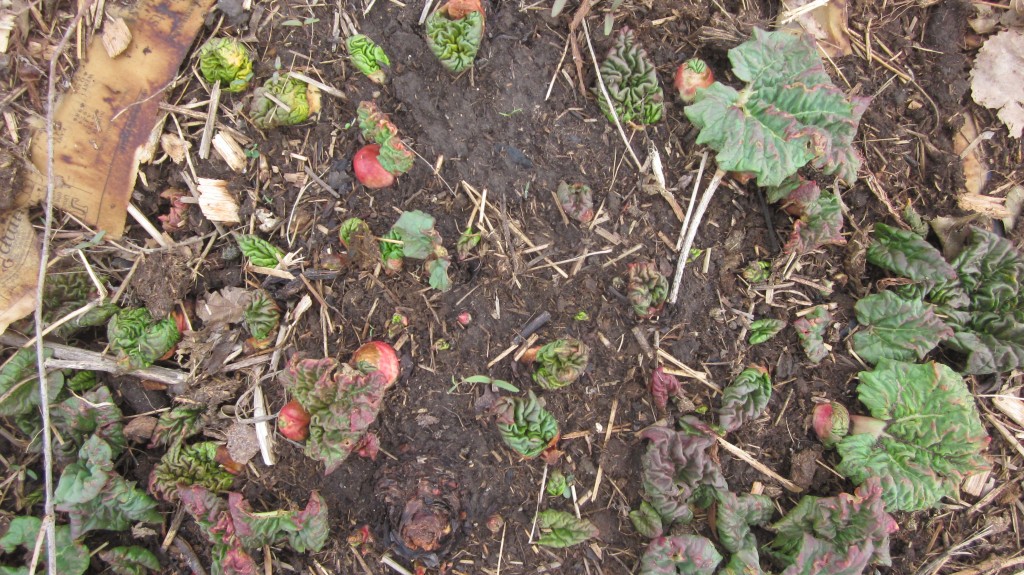 Here are the first buds of my rhubarb pushing up out of the soil.

The very best time to divide and multiply your rhubarb patch is in the fall after the plants have gone dormant, but last fall followed that disastrous hot and dry summer, and I really didn’t want to pick on my poor rhubarb plants that way. I like them. I didn’t want to kill them. So I decided to go for the second-best time to divide and re-plant, and that is early spring. To be precise, yesterday.

Yesterday had all the hallmarks of a perfect rhubarb dividing and replanting day: a. my plants hadn’t started sending up their delicate stalks yet, b. there was rain forecasted for today (ensuring, hopefully, a thorough soaking), and c. my son Timothy was available to help me if I needed him.

Full disclosure time: to be honest, I had gone out the day before to Do This Thing.  I have a decent-sized rhubarb patch, composed of a few young plants and a half-dozen older plants–they are overdue for dividing, as rhubarb benefits from being dug up and divided every five years or so. The plant, when happy, grows like a weed and eventually will suffer from overcrowding and even root-rot. The stalks will get smaller and it will be susceptible to disease. I reckon my original rhubarb patch is probably eight years old, I’m a little ashamed to admit. My pitiable older rhubarb plants really need dividing. 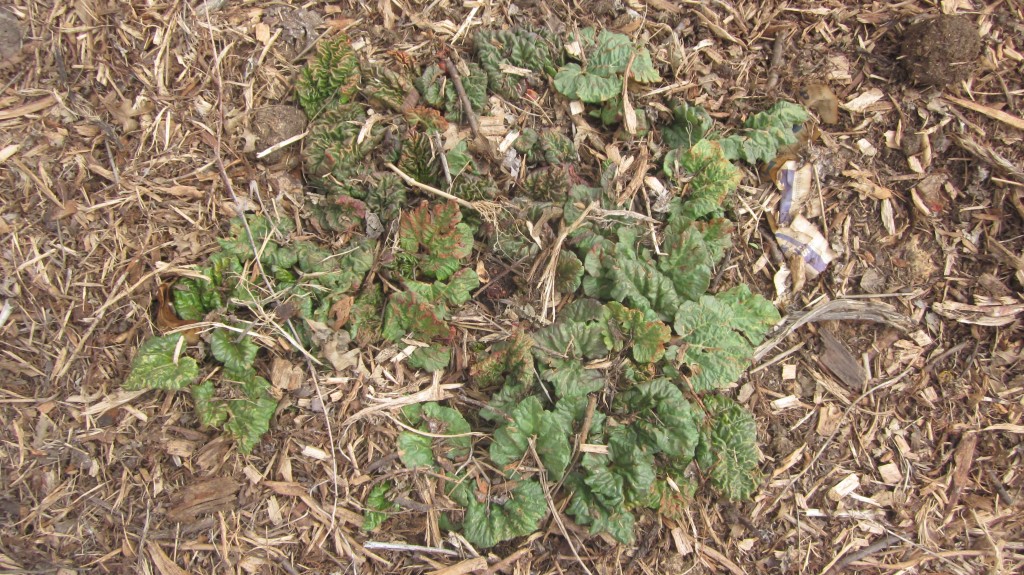 Here’s my mama rhubarb plant before I started digging her up.

I’ve decided to just tackle one rhubarb plant each year, because once you dig up your plant and divide it into many baby plants, you’re going to have to leave them alone to grow and restore themselves for a year. If I dug all my older plants (as if that was physically possible) up this year, I’d have no rhubarb for sauces, cobblers, muffins, and pies, and that’s a dim prospect to consider. Very dim indeed.

Determining that this was the day, I carried out to the garden a shovel and started digging. Gosh, the ground was hard–was it still frozen?  I minced away at the dirt with the shovel, pushing with my foot, jumping with both feet–but I could barely nick away the dirt. It was going to take a bit more time than I had originally reckoned to, um, do this thing.

Amalia called from the house. Bethie was on the ‘phone!  I trudged back to the house and had a chummy chat with my college girl, and then grabbed a different spade (I was having trouble, you see, because I had the wrong shovel) and stumped out to the garden, and attacked the clump again. Wow.  Jeepers! Maybe it was the drought last summer–could it have hardened the dirt? Had the dirt, possibly, gotten even harder while I was inside? This was much harder than I had anticipated it would be.

Amalia called from the house. Grandma was on her way out to visit! I set down my spade. Fine. I needed a break, anyway. This wasn’t such an easy job as I had thought!  While back in the house, I’d see if Timothy could help me finish digging up the mammoth plant.

We had a nice visit with my mom, and then as I prepared to return to the garden, I had another call. And then another. Some days are just like that, aren’t they? I didn’t get back to the garden that day at all. My poor mama rhubarb plant was waiting for me, partly dug up and exposed to the elements. Poor thing.

The next day after school, Timothy agreed to help me. To be honest, I was curious to see my big strong son tackle that root. He is the strong and silent type–but it was going to make me feel a bit better if digging up that root was a challenge for him, too. Was the ground that hard or was I just a wimp without sufficient heft to dig up a rhubarb root, for Pete’s sake?  I was dying to know. Kind of. And kind of: I didn’t want to know–you know??

Timothy appeared out at the garden, spade in hand . . . 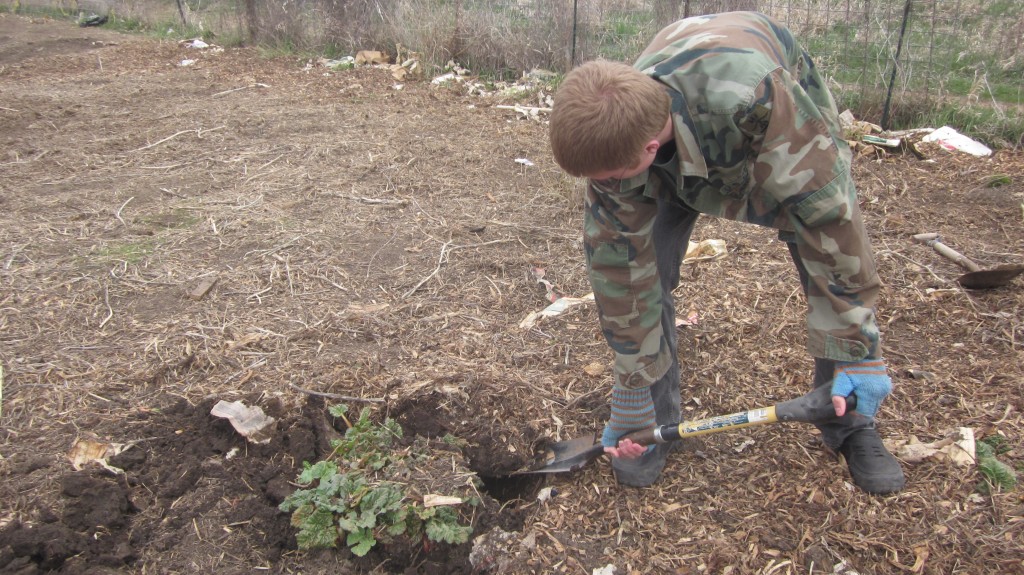 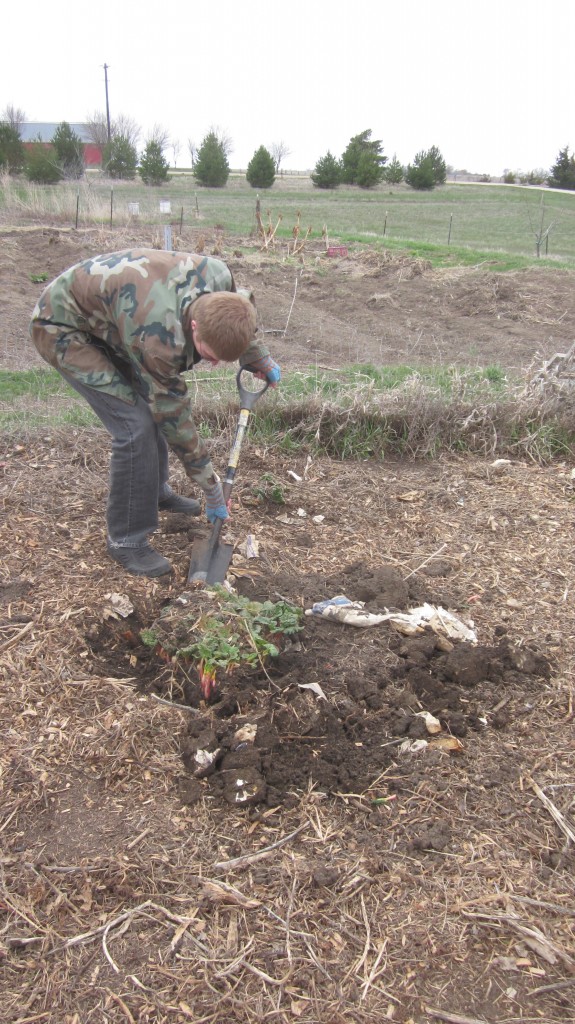 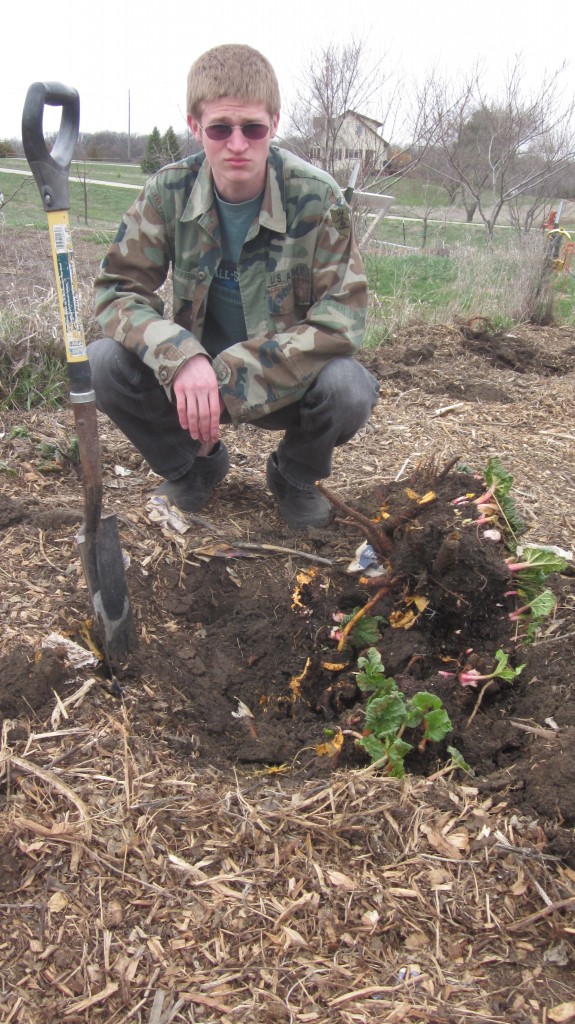 Okay, so that answered my question. I was a wimp without sufficient heft to dig up a rhubarb root. Oh well. I can live with that. Hmph. That doesn’t bother me, as long as I’ve got a strong silent type around who likes rhubarb pie enough to do his mother’s bidding. And I do. For now, anyway.

Rhubarb is a fascinating plant with an interesting history. Here in Nebraska, it provides the first fruit of the season. My dad’s mom called it “pie plant.” We make it into jams and sauces and even wine, although rhubarb pie is probably hands-down my family’s favorite way to use rhubarb at our house. Ala mode, natch! It’s also a tasty addition in muffins and cobblers. I’m really just getting started here. It’s good in so many things.

Dividing a rhubarb plant is not only an important way to keep your plants healthy, but is also an easy way to make friends with your neighbors, because when you divide it, you’ll have many new plants to add to your patch or to share. 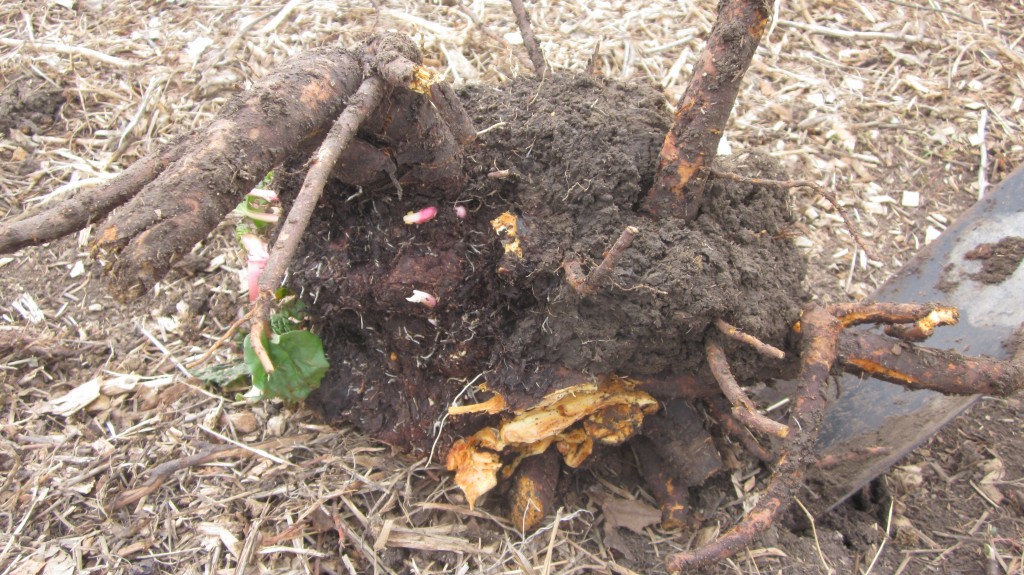 Here’s one of my baby plants, divided from the mama. You can see roots and buds.

The mid-twentieth century garden writer,  Arthur Symons, made this observation regarding rhubarb: “Although rhubarb is the most important permanent kitchen garden crop, it is often relegated to a dark out-of-the-way corner and neglected there until senile decay sets in.” Senile decay . . . I don’t like the sounds of that . . .

Assuming the “senile decay” is referring to the plant and not to the gardener, it is my opinion that we should pamper and cossett this plant with the delectable stalks to put off this decline.

So here are simple instructions for you, if you have some older rhubarb plants in need of attention in your garden. But don’t delay in this task–it’s much more difficult and much harder on the plant if you dig it up after it has sent up its stalks. 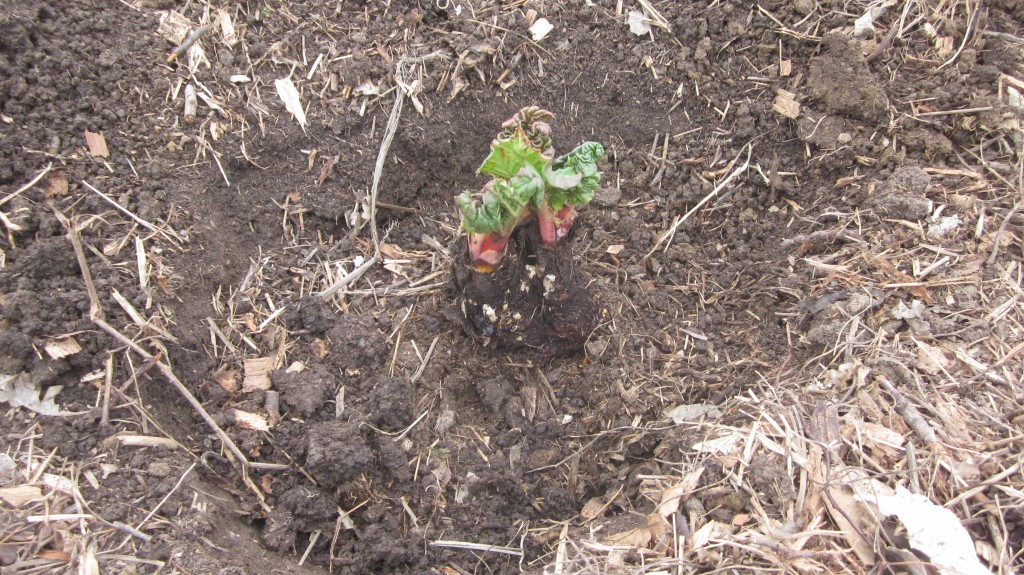 Here’s my cute baby rhubarb plant in its new home, waiting for me to finish filling the hole with compost and dirt.

Don’t pull any stalks from the newbie plants this summer, but you may start harvesting next spring.

There!  That’s it!  Admittedly, digging that mammoth plant up is no easy task, but the rest of this job is easy as . . . well, as pie.  Especially if you have somebody with muscles around who doesn’t mind trading work for pie! 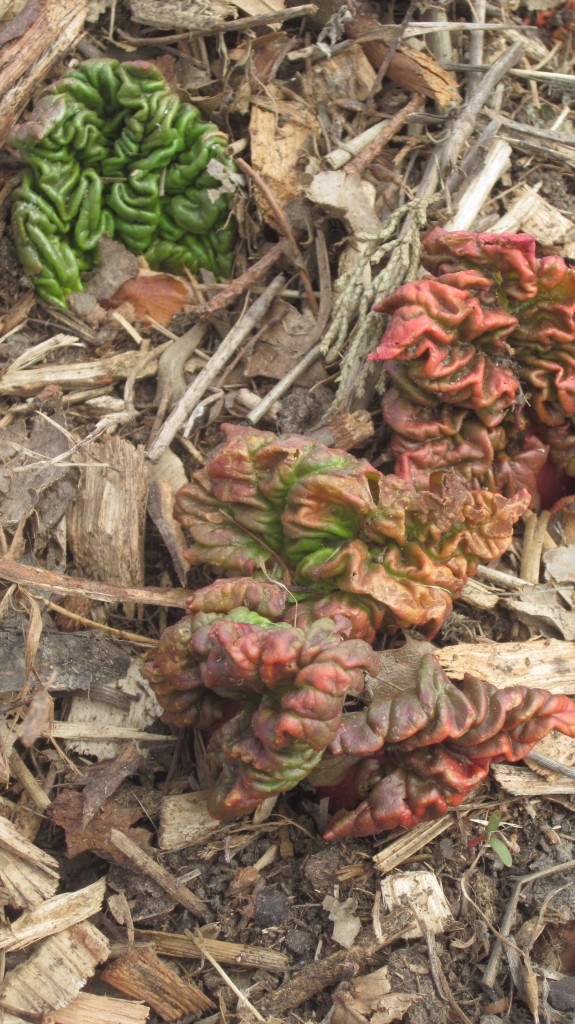 The colors and wrinkly nature of these rhubarb leaves emerging from the earth delight me so.

29 thoughts on “Rhubarb-dividing time will be followed by pie-making season!”