What did Saturdays mean, when you were a kid? I’ll tell you what they were for me: sleeping late(ish) and eating cold cereal. (Mom made hot breakfasts during the week, so cold cereal was a treat on the weekends.) Sitting on the floor in front of the t.v., watching cartoons. Joining in on whatever the family was doing. If it was winter, building forts with my brothers and sisters with card tables and rugs. Or playing hide and seek in our large house, with all its hidey-holes and hidden corners. Playing games. (Life. Parcheesi. Sorry! Checkers. Chess.) Roasting hot dogs and marshmallows in the living room fireplace. Sledding or snowman-building or snowball fights.

If it was warm outside, it was another matter. Maybe a trip to the town pool, or picking strawberries for Mom, or pulling a few weeds and then playing at the park. Saturdays were awesome when I was a kid. They always included spending time with my family, sometimes my friends, always a good book in my hand and some kind of special snack.

Did you hear that sigh from me, that wistful sigh of longing?

Were your Saturdays awesome, too, when you were a kid? I hope they were. Are they still awesome now? I hope they are! I know that we’re all grown-ups now (mostly) but surely, surely there are things we can do to re-capture some of that bliss . . .  of childhood Saturdays?

Okay, let’s just agree on something. Let’s not think about waking up very very early on a Saturday because you have such a long to-do list that you need a couple of extra hours to get it all in. Let’s talk about what we can do to get a little rest this weekend. A little relaxation. We need it. You need it. I need it. Monday is, after all, coming, again, in just a couple of days. Christmastime was busy. It was kind of lame to catch the flu right after it, too. So a little recreation, methinks, would not go amiss, today, of all days.

After all, it’s Saturday.

So here are a few low-cost, low-effort, ideas for a bit of refreshment this Saturday, for you, and for me.

First: how about watching some cartoons? With somebody you love, and with some cold cereal with milk? Boom. I’m ten again. That was easy. The only requirement? They need to be something that will make you laugh.

Go for a walk! Let me tell you about a mini-adventure little Mack and I had this week. It has been cold, as you know, everywhere (well, not in Hawaii, I hear) and so one day when it was all the way up to 20° we went out for a walk. We bundled up, first, and we determined not to go far. But, oh, what we found; it was really delightful! 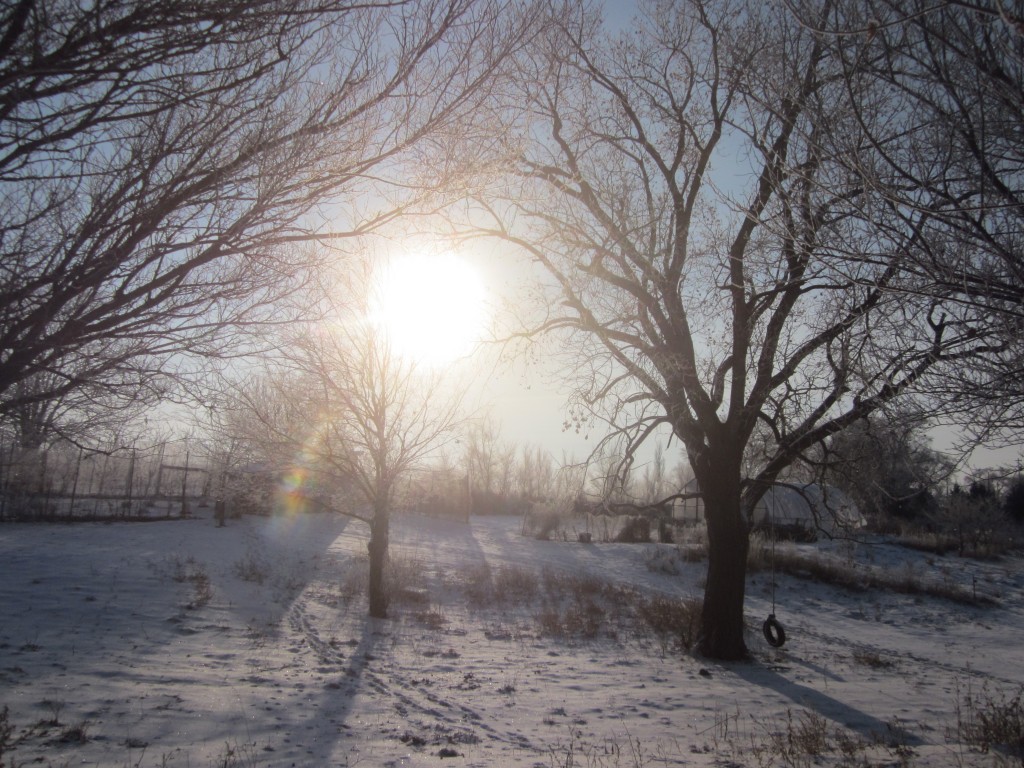 We walked in the stubble-filled cornfields around our place, and enjoyed the couple inches of sparkling new snow. And then we started seeing tracks. Of course, we both agreed, this was the absolutely perfect time to learn what kinds of wildlife there is, partying out there in the nighttime, while we sleep. Fresh snow, you know, shows everything. We saw a lot of tracks, and I regretted, immediately, not having my camera along. Little field mice tracks. Little birds, hopping about and uncovering snow to get at the dirt and sand underneath.

And then. We started following the tracks of something (Mack was convinced it was a wild cat of some kind, as the tracks had no toenails showing) that meandered through the field, and then met with some other somethings, lots of them, and moved into some woods nearby (yes!) and . . . had a feast of some sort, leaving blood spots and even a bloody bone behind in the snow. Mack was ecstatic at this. Best. Find. Ever. It made me a bit nervous, seeing this proof of rampant carnivorism, just over the hill from our house. My eyes began to sweep up into the trees above us. Big cats are good climbers, you know.

“And then I pulled out my gun.” 🙂 But neither of us had a weapon of any sort on our persons, although there were a few sticks lying about, close by.

“Oh Mom, why don’t you have your camera?” my son moaned. Although I think it was nearly worth it to forget my camera, to see the documenting drawings he made when we got home. The drawings were better than any photos.

We followed the tracks down into a deep ravine, and then up the steep hill, out of the ravine. We studied them for awhile, though, first. “Look how the dirt is disturbed,” Mack pointed out, “underneath the snow. Why is it that way?” We pondered for a moment or two. We were being naturalists, curious scientists, not being deterred by cold or snow, studying wildlife, as was our particular wont. Then we scrambled up the hill, ourselves, and we learned why the creature had disturbed the dirt, of course. It’s hard to scramble up a hill that steep, and there is lots of sliding and digging in of the toes.

We made the same kinds of deep tracks, and then we giggled to find that the wild creature had relieved itself at the top of the hill. “This scat is fresh,” said my son, soberly. “It’s still warm.” I challenged that notion. “How do you know? Did you touch it?” I asked. “A real scientist would touch it.” He giggled and we shared a moment. We do not spend enough time like this together, I made that mental note, following tracks and studying wildlife and just giggling together.

We walked and explored and talked and observed until our toes began to feel quite numb, and then we hoofed it back over the hill, towards home. When we got home, I grabbed my camera (sigh) and took pictures of the tracks that a chicken made in the snow, at least. There wasn’t time to re-trace our tracks back to the ravine, not this day, anyway, but I could at least take a few pictures closer to home. I was pretty tickled by those chicken tracks. Step, drag, step, drag. 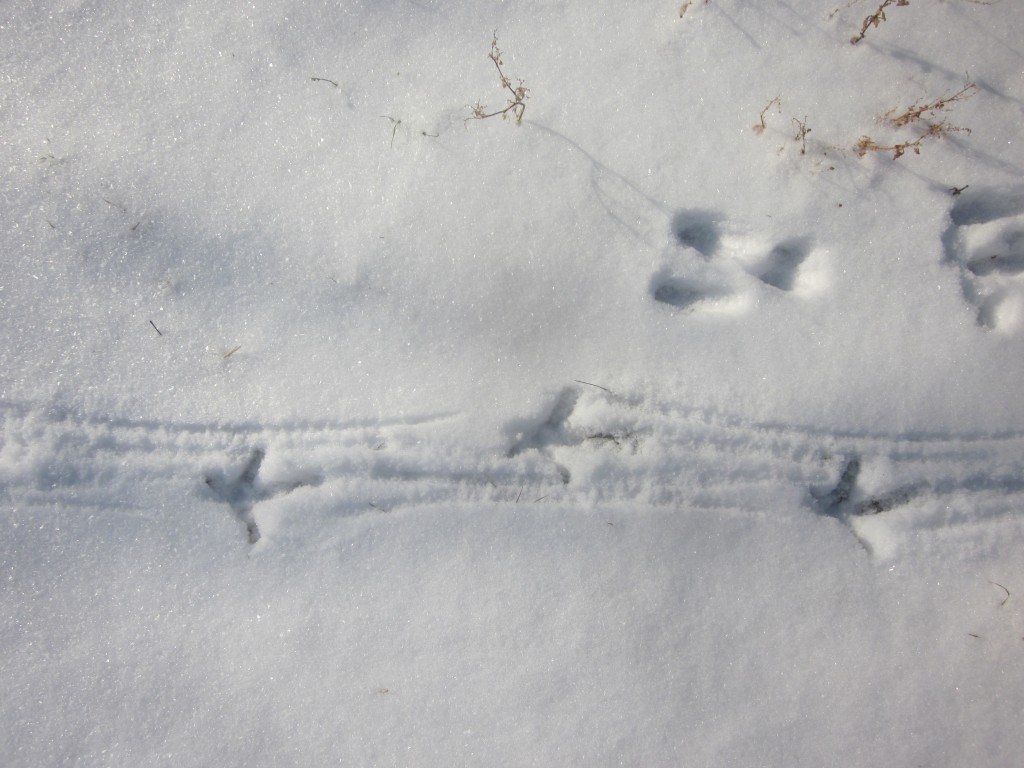 I watched the chicken make these tracks. I could almost hear her muttering against the snow, under her breath. “Hate the snow. HATE the snow.” I know a few people like this.

After a good walk outside, you may want to consider this:

Make a good salad. I love this recipe by Joy the Baker, for a salad with avocado and grapefruit and edamame, and I’m so making this for lunch today! I think this is a very happy salad! A salad fit for a Saturday! I think, if I ate this salad for lunch, it would give me just enough energy to . . .

Read a good book. I’ve got, at least, two full shelves of books that I intend to read this year. Oh, talk about longing! Do you stash away books to read, someday? Will that someday ever come? Right now I’m reading this one, that my sister Mollie gave me for Christmas, called The Chicken Chronicles, by Alice Walker. I love it.

Here’s another one I really want to read. It’s on my Wish List. I feel a little silly about buying another book, before I’ve read some of the ones already in my shelf.

There are quite a few fun chicken memoirs out there. I hope I can get mine out before everybody’s tired of them . . .

So there are a few ideas of things that might be very refreshing to do this Saturday. How about it? And then there is always this one:

Go to the movies. The Hobbit is still in the theatres, I think, and there’s this one that I really want to see soon. “Saving Mr. Banks,” about Walt Disney and the author of Mary Poppins, P.L. Travers, and the making of the movie “Mary Poppins.” Yes. I need to see this one in the theatre! Tom Hanks. Emma Thompson. Paul Giamatti. Great cast!

Once upon a time (isn’t this how all fairy tales seem to start?), there lived a boy from Missouri, named Walt Disney. This boy had a piece of paper with a mere SKETCH of a mouse upon it. And think of what a legacy he created, out his creativity and hard work! I love stories like that.

Now. After cartoons, a good salad, a good book, and a movie, you’re going to need to:

Take a nap. Yup. I mean, one without guilt or any hurry to get up any time soon. Just one of those fall-into-the-bed with your book, pillow-over-your-head, and no thoughts–not one–about the clock or what it may say. The clock doesn’t know about Saturdays, after all. Afterwards . . . who knows? Maybe you’ll get so deep into Saturdaying that you’ll go out for ice cream. Or build a snow fort with somebody dear to you. Or write a letter to somebody, on actual paper. Or order pizza, and eat it on paper plates.

Well, what are we waiting for? Saturday awaits!!