To be clear:  I am not a fan of daily morning-to-night marathon TV watching.  I regularly have fits over the fact that the average American watches 37 to 40 (yes!) hours of television every week, on average (ask my children).  This is astounding.  I can only imagine how shrivelled up my poor brain would be, and how wide my derriere, if I watched this much television.  How pale my skin, how soft my muscles.  How dirty my house, how naughty my children, how raggedy and unkempt my chickens . . . well, you get the idea.

That said, I love nothing more at the end of a long day of school, work, chores and various activities, than to sink down into our ugly but cozy couches in our dimly-lit basement TV room, steaming cup of licorice spice tea in one hand and perhaps a knitting project in the other, in the company of a few enthusiastic co-watchers, to watch something captivating, funny, clever, or a combination of the three.  Here are some of our family’s favorite television shows. 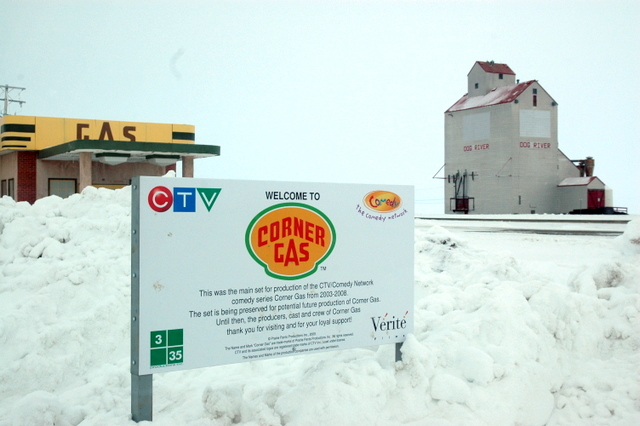 This Canadian sit-com is set in the fictional small town of Dog River, Saskatchewan, and most of the action happens at the gas station (the only one for miles around) and the coffee shop.  Having grown up in a small town (and living near one now) I appreciate the quirky characters and the small-town humor of the show.  I get that kind of humor. Hey, I live that kind of humor. 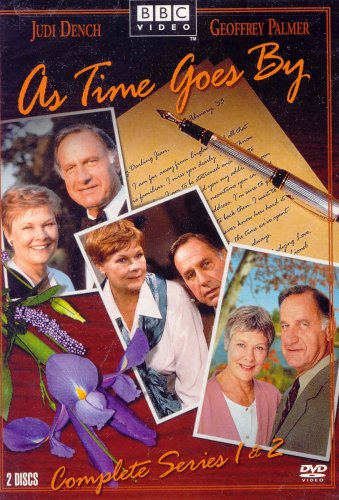 This very funny British comedy follows the lives of Lionel and Jean, two lovers who had had a relationship when they were younger, but (because of a misplaced letter!) lost track of each other for 38 years, and then met up again by chance.  The two main roles are played by Judi Dench and Geoffrey Palmer, with a cast of interesting and funny characters.  I enjoy the dry wit of British comedies, and this one (in my opinion) is one of the best.  I also like to see older actors playing such great roles, as I get (ahem) older.  It’s not just the young and beautiful folks who have adventures, people!  (just sayin’) 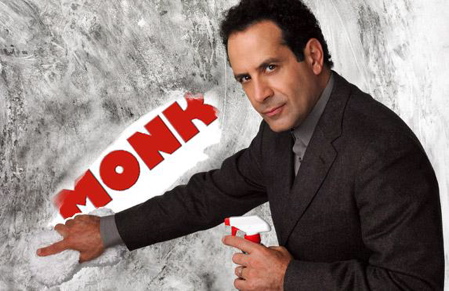 We bought the DVD sets for a few of the seasons of MONK for Christmas one year, and we’ve watched them many times.  I doubt that you’ve never heard of it, but if you haven’t, here’s a synopsis:

Adrian Monk–the main character–was a brilliant detective for the San Francisco Police Department until his wife, Trudy, was killed by a car bomb, which Monk then believed was intended for him. The death of Trudy led Monk to suffer a nervous breakdown, and then he became a recluse with many nervous compulsions, including OCD.  With the help of a nurse, Monk eventually is able to function in society again, and he is called on again and again to consult for the police department.  He is brilliant and notices things that nobody else does (in this, we have a lot in common, haha) and so he is able to solve crimes that nobody else can.  Besides being an intriguing mystery show, there are lots of humorous moments, as the character Monk uses his compulsive disorder to his advantage.

Parents:  Usually the beginning of this show includes a murder, and sometimes it’s gory.

This smart and fast-paced show airs on the USA Network, and we don’t have cable, so if we want to watch it (and we do!) we drive in to my folks’ house every Tuesday night and settle down with cups of tea and my mom’s homemade cookies (hopefully!) and enjoy the show there.

Here’s the premise in a nutshell:  Neal Caffrey, a con man, forger and thief, is captured after a three-year game of cat and mouse with the FBI.  Peter Burke is the FBI agent who captured him. Caffrey offers information that will help the FBI with an investigation, but it comes with a price: Burke must have a meeting with Caffrey, at which he proposes a deal: he will help Burke catch other criminals as part of a work-release program. Burke agrees, after some hesitation. Through the successful apprehending of several white collar criminals, Caffrey has proven to Burke that he will help him, and that he will not try to escape again. This begins an unconventional but successful partnership.

One thing I really enjoy about this show is the beautiful camera work.  It is set in New York City, and the views of the city and the beautiful sights there are delicious. 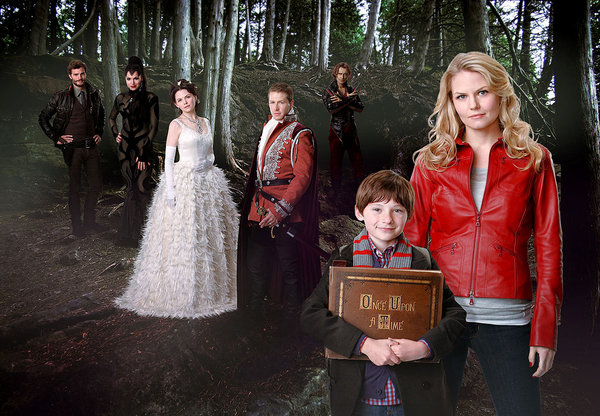 The series takes place in the fictional seaside town of Storybrooke, Maine, in which the residents are actually characters from various fairy tales that were transported to the “real world” town and robbed of their real memories by the evil queen Regina, using a powerful curse obtained from Rumplestiltskin.  Each episode tends to include a new character (and so a new fairy tale) and all the stories tend to get tangled up together.

The town’s only hope lies with a bail bondswoman, Emma Swan, who happens to be the grown-up daughter of Snow White and Prince Charming, who was magically transported from the fairy tale world before she could be cursed. As such, she is the only person who can break the curse and restore the characters’ lost memories, aided by her son, Henry,  with whom she has recently reunited (after giving him up for adoption upon his birth), and his book of fairy tales that holds the key to ending the curse. To complicate matters, Henry is also the adopted son of Regina, providing a source of conflict between the two women.

Parents:  The Evil Queen Regina is actually quite evil, and she has this dandy trick of grabbing people’s hearts out of their chests when she is displeased with them.  Little Mack doesn’t watch those bits! 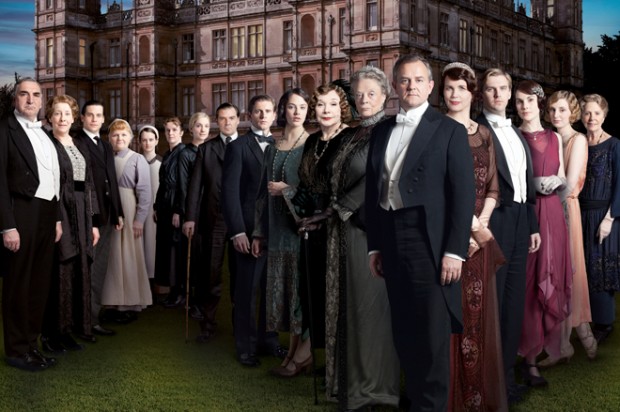 I love Downton Abbey.  I hate Downton Abbey.  Do be forewarned if you start watching this show (and you will), don’t get too attached to any of the characters because, chances are, your favorite will end up dead, in a bizzare and unforeseen event.  But–on the other hand–they can’t kill off all the characters in the show, or there would be no show!  (My daughter, reading over my shoulder, just muttered “yes they can–and they will!”  She’s still a bit bitter over the fact that her favorite character met her unfortunate demise.)

This series, set in the fictional country estate of Downton Abbey, depicts the lives of the wealthy and aristocratic Crawley family and their servants in the post-Edwardian period, with the great events in history having an effect on their lives and on the British social hierarchy.

The sets and costumes are scrumptious and the acting, in general, is very good.  And although my husband snorts when we sit down to watch it that it is “just a soap opera in a fancy package” we all love watching it, anyway.

There are many memorable lines in each episode.  One of my favorites:

Countess Violet: “I’m so looking forward to seeing your mother again. When I’m with her, I’m reminded of the virtues of the English.”
Matthew: “But isn’t she American?”
Countess Violet: “Exactly.” 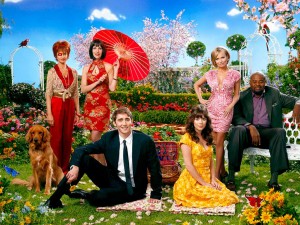 Just looking at this picture makes me smile: the bright colors and great costumes are part of what make this show so fun to watch.

Pushing Daisies is a jewel of a show which was cancelled way before it should have been, in my opinion.  It’s known as a “forensic fairy tale” and centers on the life of Ned, an earnest pie-maker “blessed” with the mysterious ability to bring dead things back to life by touching them. There are some conditions to this talent. Ned quickly learns that if something is revived for more than exactly one minute, something of similar “life value” in the vicinity drops dead, as a form of balance. Additionally, if he touches the revived person or thing a second time, it falls dead again, this time permanently.  Complicating this situation is the fact that the young woman he loves, Chuck, he has brought back to life, meaning he can never touch her, lest she fall dead.

The show is so creative and fun to watch, with such quirky situations and impossibly bright and beautiful sets and costumes, and such fast-paced dialogue, that at the end of each episode I would find myself wanting to watch it again.  That never happens with me.  Usually watching any show once is enough.  The set designer said that his goal with the show was “a storybook come to life,” and he attains that goal beautifully.  Also there is plenty of original and fun music during the show.

Parents:  Each show usually includes a dead body, sometimes humorously maimed, which may be disturbing for smaller viewers.

So those are some of our favorite TV shows that we indulge in. I’m calling this post Part I because as I wrote this, I thought of several more that I wanted to share, but I’ll do that at another time!

We’ve heard of most of these through word-of-mouth.  Maybe you and your family would enjoy some of them, too! I’d love to hear some of your favorites in the Comments section below!

11 thoughts on “Some guilty pleasures: our favorite TV shows, Part I”