Hey there, you! I’ve got two things to share with you, then I’ve got to skedaddle . . . too many irons in the fire this week, for sure! And most of them are staining my fingers purple. (See below, for a hint on what I’ll be writing about next.) 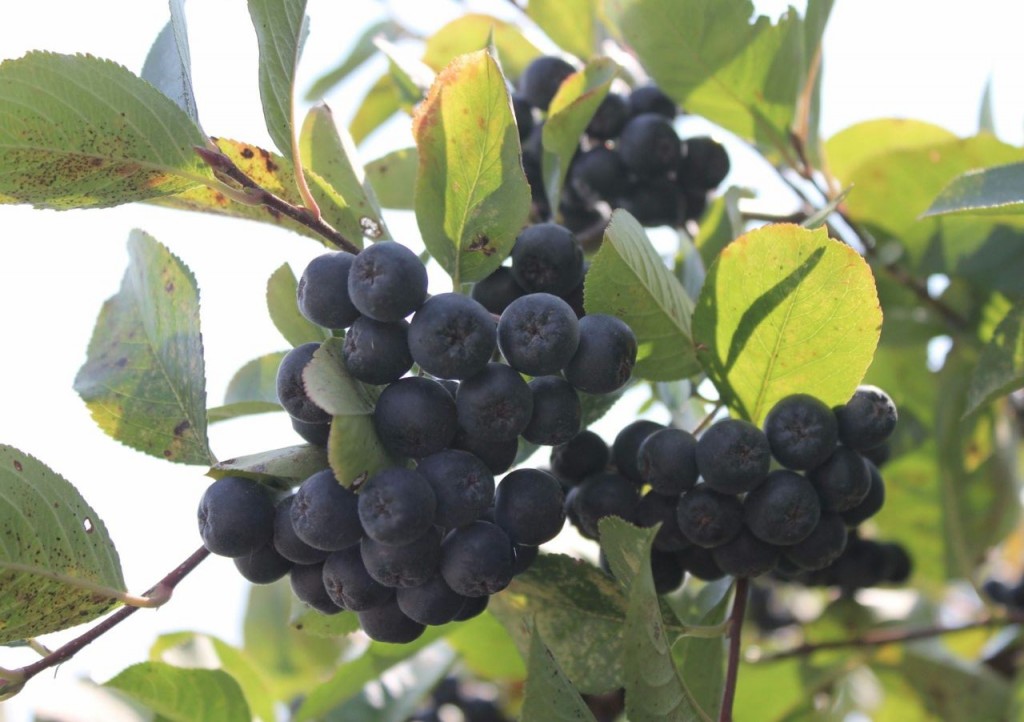 (But more about that later.)

Thing One. I’ve written a guest post entitled “25 Lessons I’ve Learned From 25 Years of Homeschooling” for my friend Robin’s blog, so if you’re interested in learning more about our homeschooling whys and wherefores, you can read Part I here, or click over here to read Part II. Robin’s blog is always fascinating, so you probably want to pour yourself a second cup of coffee and just check it out while you’re over there.

That Robin. She fishes. She hunts. She raises chickens, grows gardens, and forages for wild foods. She grows food in an orchard and three high tunnels. (I wonder how many freezers she owns–Robin?) She raises pigs for meat. 🙂 She takes lots of photos and writes a blog. Honestly I have no idea how she does everything she does. She’s me, squared, except that she lives in the wilds of Maine instead of the plains of Nebraska. (No bears here to hunt, Robin!)

I just had a thought. Me and you, Robin. Hunting together in the woods in Maine. I just felt a shiver of anticipation. Whaddya think? Could we make it happen?

Hmm. Back to earth: I also wax on about why I don’t write much about our homeschooling experience right here, if you’ve ever wondered about that. I do have my reasons (snif). They probably aren’t very good ones, but oh well. 🙁

Thing Two. My wildly talented son Andrew has designed a family D.I.Y. paper craft RPG game, and today he is launching a Kickstarter campaign to fund it. I’m so excited about this! 🙂 I’m going to embarrass Andrew by telling you just a little bit about him, although I have enough stories about predicaments he got himself into to write a good-sized book. You mamas out there will enjoy this. And perhaps it will give you hope. ‘Cause . . . well . . . see what he’s up to now!

Andrew’s the kid who, as a toddler, was so restlessly creative that he’d draw on the walls and the furniture. Unfortunately at a very young age, he favored the bold black permanent markers that his dad brought home from his job at FedEx, so . . .  big, fat, black line drawings is what ended up on the backs of the couch cushions and on the wallpaper in back of the couch.

Oiy. We certainly could have used a big rolloff dumpster in the backyard those days, ’cause we went through a lot of furniture!

His excuse for all this? “I ran out of paper”(sigh).

He’s the kid who (again, he “ran out of paper”) colored on a hot light bulb, and then (when the crayon wax began to heat up and smoke) doused it with a glass of water, which resulted in a loud “pop!” that we heard on the level below. It was his naptime. He was 2.

He’s the kid who filled notebook after sketchbook after pad of paper with doodles and drawings and cartoons and stories. He flew the coop many years ago and I still find little pencil-drawn stand-up figures that he made in nooks and crannies of the house. Truth. I just found one the other day out on the driveway. It must have dropped out of a box of trash that I carried to the dumpster. It made my heart hurt, just a little.

He’s the kid who never slept. He was always fiddling with something: hot wax, clay, cardboard, duct tape and pvc, you name it. He’s the kid with the tender heart who dashed out in the storm to save some newly-hatched chicks from their crazed mother who turned on them. He’s a born inventor and artist, and I couldn’t be more proud of him. You know what I’m talking about, mamas. I wouldn’t change a thing about him, but you know . . . there were days when I wondered . . .

And now, he’s the bearded young man who has developed this awesome game designed for families to play together. We played it over Christmas vacation, and I can attest that it is a fun and engaging game!

I think my favorite part about the game was (besides the fact that Andrew’s imagination is so prevalent throughout) watching the leadership role go from one of us to the other. Little Mack had just as much fun running the show as the rest of us did, when it was his turn. His giggles, when he turned the page to discover another silly twist in the game’s plot, were precious.

There is lots of drawing and cutting and designing and taping, too, which I found very fun. And stand-ups. And monsters. And action figures. Trust me. It’s really fun.

Here are a few photos from our afternoon playing D.I.Y. Paper Dungeon. 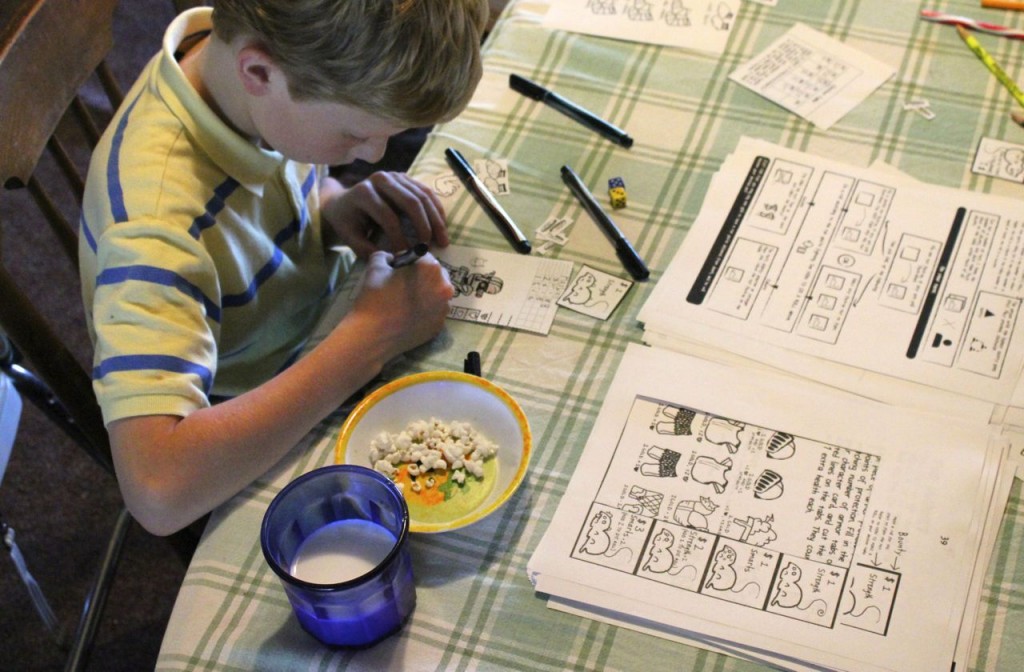 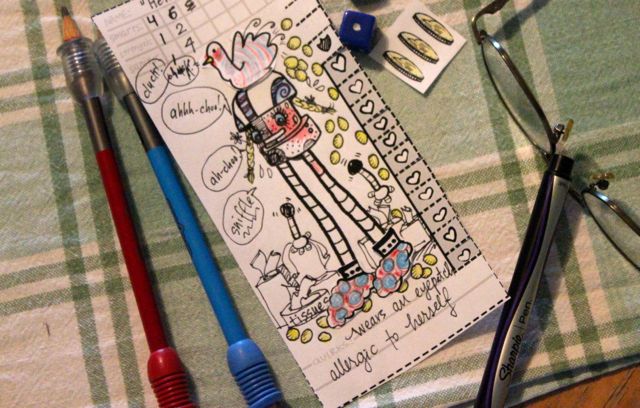 One of the individual character pieces. 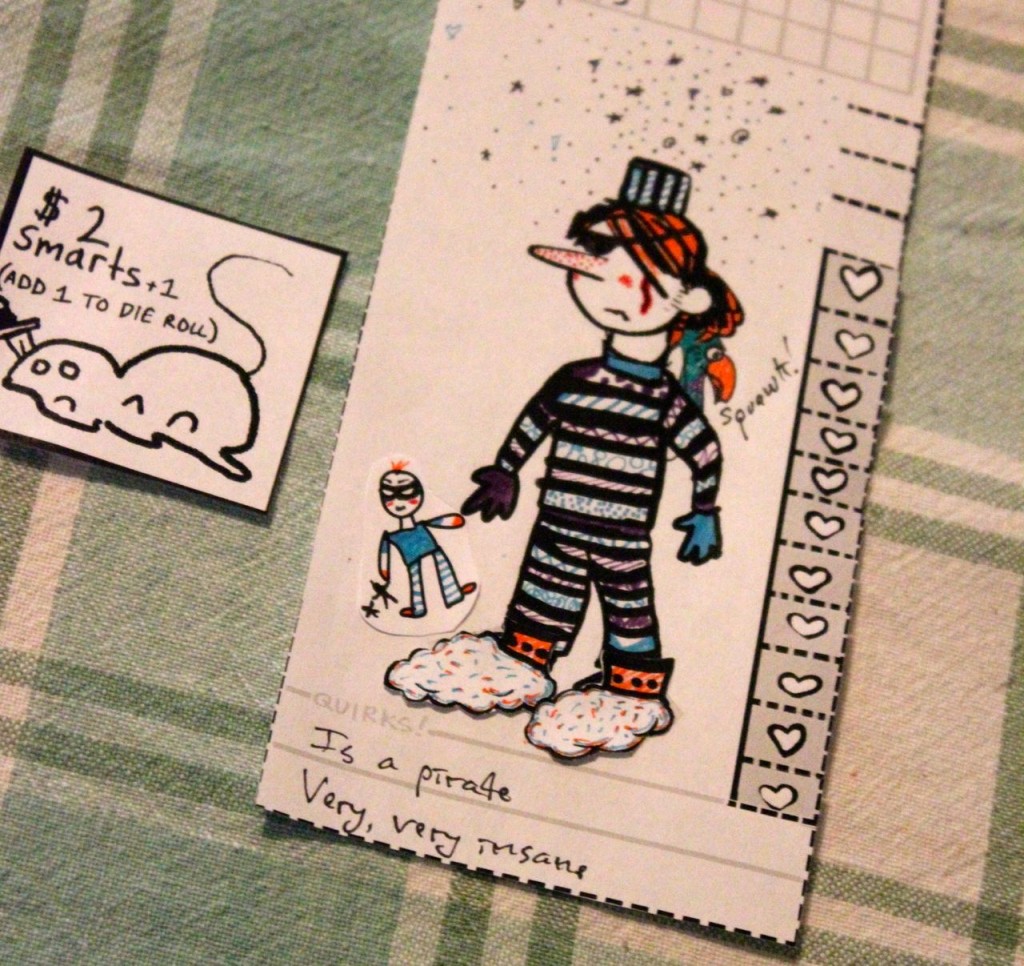 If you’re interested in learning more about this game, you can do several things that only take a few seconds:

Oh, yes, and here’s an interview with Andrew done on Geek Dad, where he talks about his life now, how he came to design this game, and more. It’s great!

Thanks Gentle Reader, for listening to a proud mama brag on her kiddos so often. You are very indulgent and kind to me. I appreciate it. You’re the best!

Oh, one more thing: I am still running a giveaway of dried elderberries from Mountain Rose Herbs: just make a comment on this post for an entry! Share the post for a second entry. But don’t put it off–it expires this Thursday night (September 3rd), when I’ll pick a winner.