It happens every year during melodrama rehearsal schedule: About four or five rehearsals in, I look at the schedule (that I crafted, mind), magneted on a prominent place on the ‘fridge, and despair at how much work is ahead of us.

It seems so loooong.

It’s not just the rehearsal time (two nearly-four hour rehearsals, twice a week) but there is music to find and practice, set to design and build and paint, props to procure, royalties and rental fees to pay, copies to make, and so much more. Lists and more lists. And more lists. Then we get to the point where we can put off the hard stuff no longer, and we put our shoulders to the plow and just do it.

I design and paint the trickier set elements, I toss lots of paint around and practice a lot of music; I boss Amalia and Mack around until they start to hide when they hear me coming. Bryan makes sugar glass bottles and a wind machine and a working door. Dad makes another peg leg to fit our actor, and a corn cob pipe and a lever that makes the sound that we want, and fashions a meerschaum pipe out of a Duck Dynasty bobblehead. 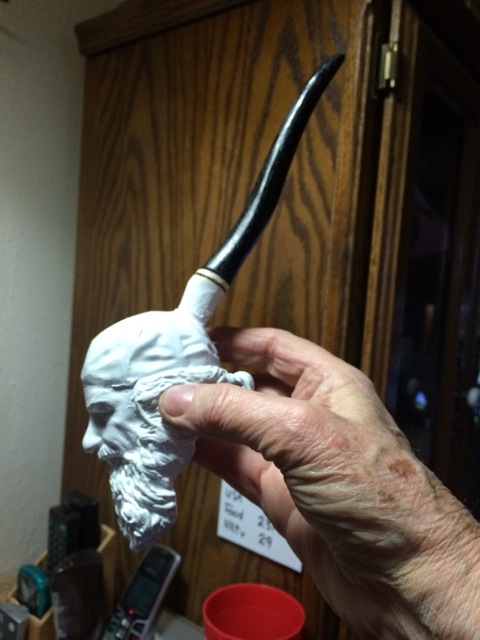 And then it happens: I pass by the refrigerator again, glance at the schedule and realize–mercy! There are only three regular rehearsals left, and then it’s show week!

It’s incredible. And then I realize that I’m not so ready for it to be all over, after all. I’ve grown fond of all these crazy, noisy, happy, creative kids that we work with every year. I don’t want to think about not seeing them all for several hours every week. My heart aches now to contemplate it all being over very soon. 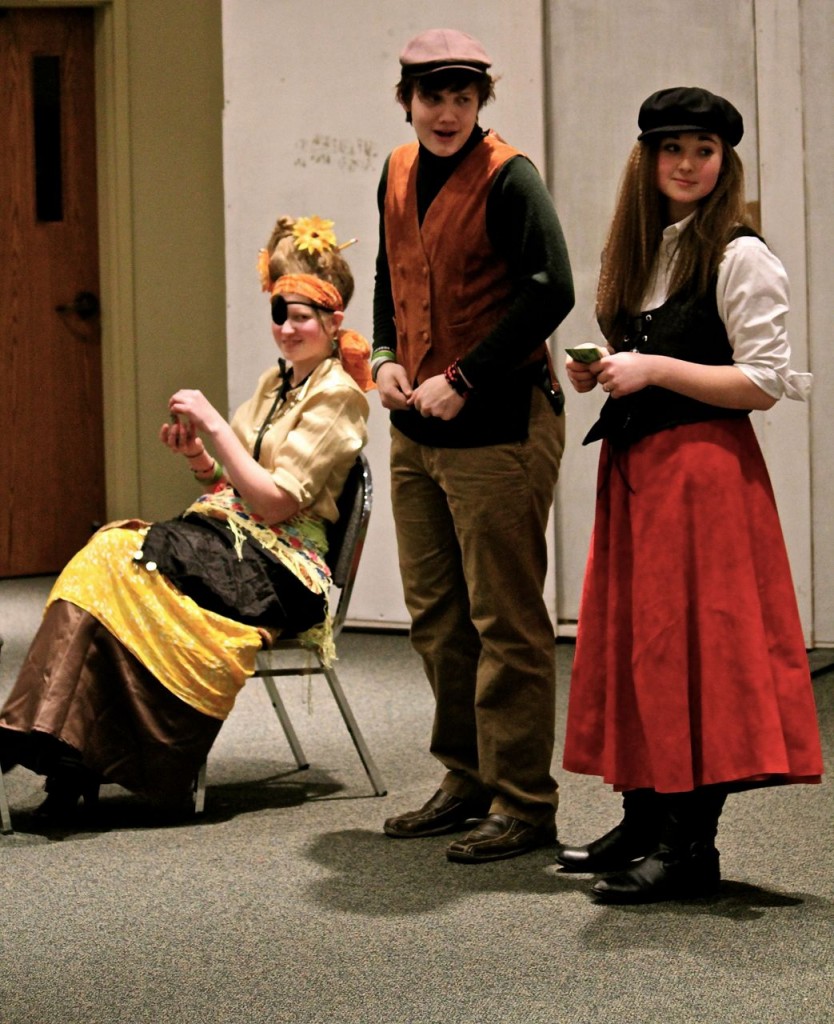 We had Big Hair Day at the last rehearsal, that strange-but-awesome rehearsal where nearly everybody comes with big hair, and they struggle more than usual to stay in character while they are onstage. It’s a valuable exercise for them, because when they are facing an audience, they’ll be distracted, too. It’s also a great time for the rest of us.

Some hairstyles are really quite wild. It may seem silly to spend an hour on a busy afternoon on something this silly. But we are theatre types, and theatre types do silly things. 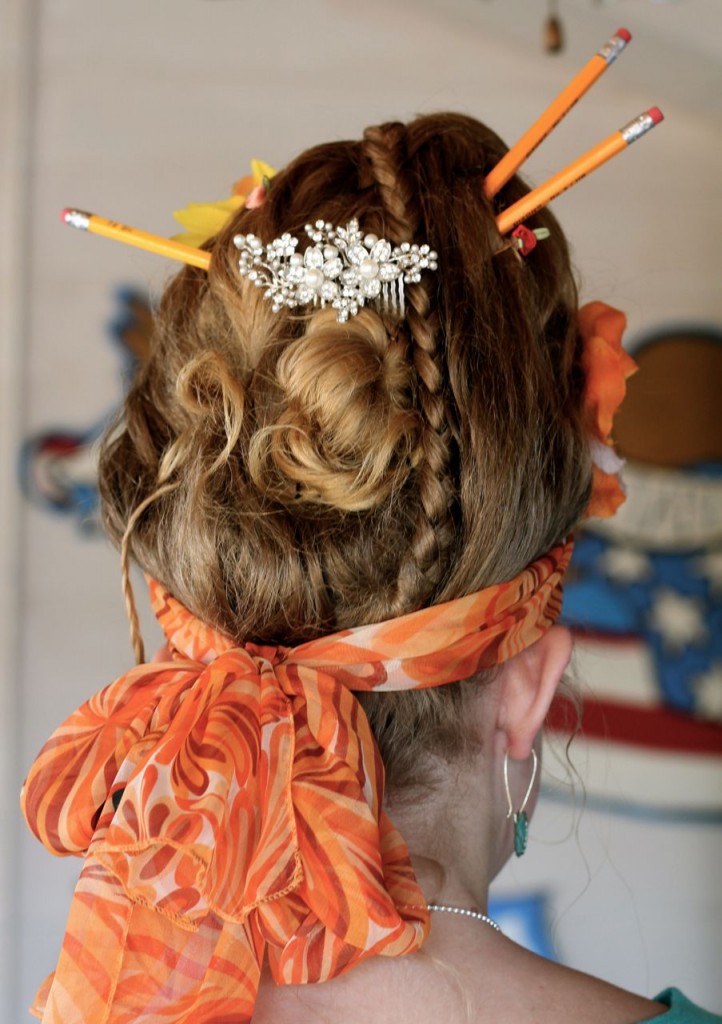 Amalia’s big hair from the back. 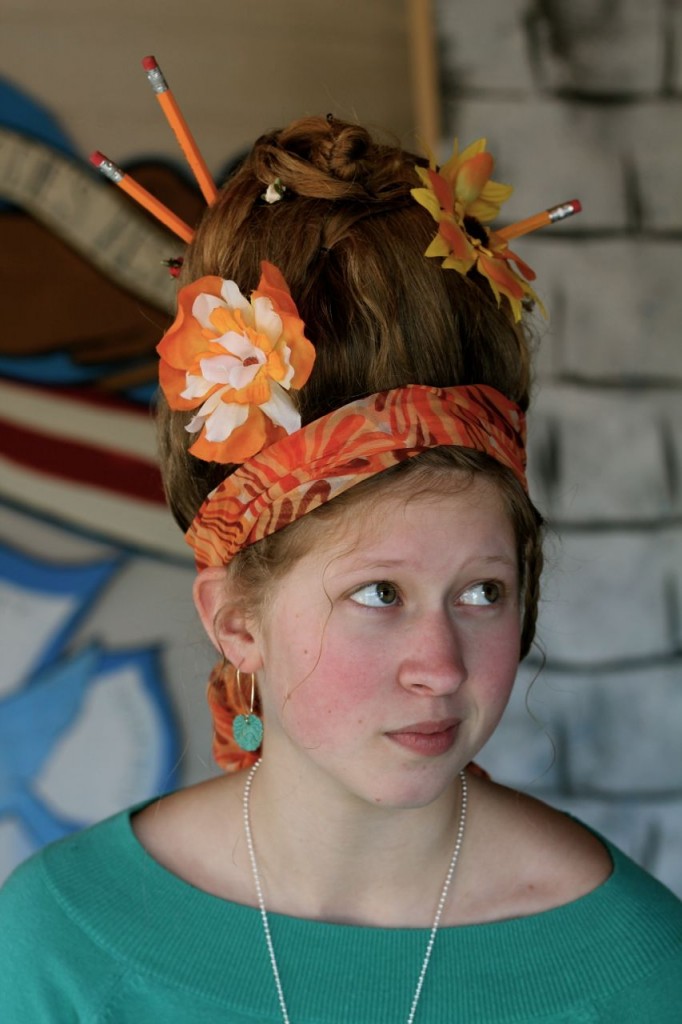 Amalia’s big hair from the front.

I’ve enjoyed myself probably more than I ever have before with the set painting this year. I’ve painted a dark and crooked street full of sketchy businesses on the Bowery, several flats full of big rocks, a boat that we’ll pull across the stage, and plenty of fun signs. I learn something new every time I paint set. I’ve had offers of help, but I’ve selfishly kept most of the painting to myself. I’m able to do this because Amalia and Mack are diligent (most days) with their music practice and their homework and their chores, and Amalia is such a good cook, that nobody minds when Mom is a full-time artist for a few days. It’s all about the feeding, you know . . .

I don’t know. I could paint and create like this for a few more weeks, I think, I’m having so much fun. But I’m almost finished with the tough stuff. And that’s a mercy, because there are bills to pay and some other things that badly need doing. Some garden stuff to figure out, and some blogging matters that I’ve put on hold. Some cleaning that badly needs doing. I think I’m coming down with something, because I’ve got a scratchy throat and I can’t sleep. 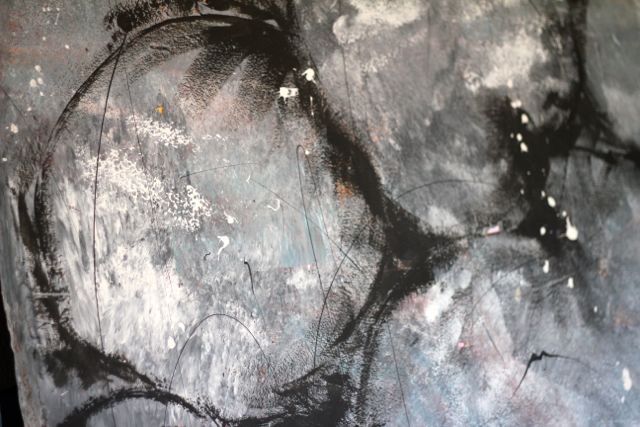 Slick Annie, one of the bad guys, has her hideout in a cave. I love painting rocks! 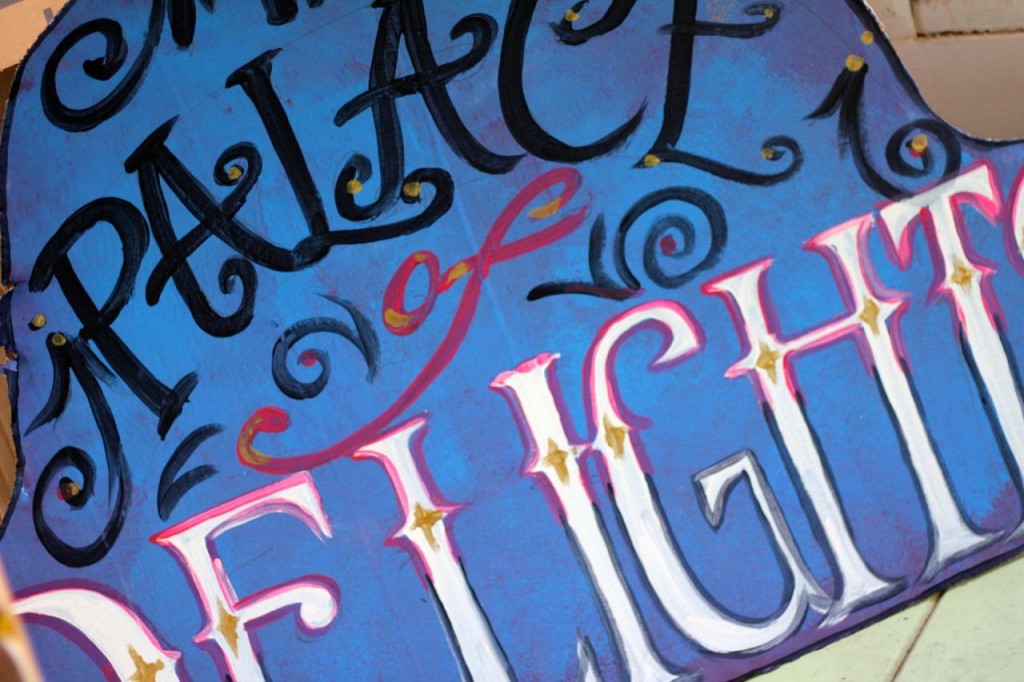 A sneak peak of the sign for the Palace of Delights, the den of iniquity in this show.

We have just two more regular rehearsals left (gasp!), and then two dress rehearsals and the exhausting-but-thrilling-immersion into Show Week. 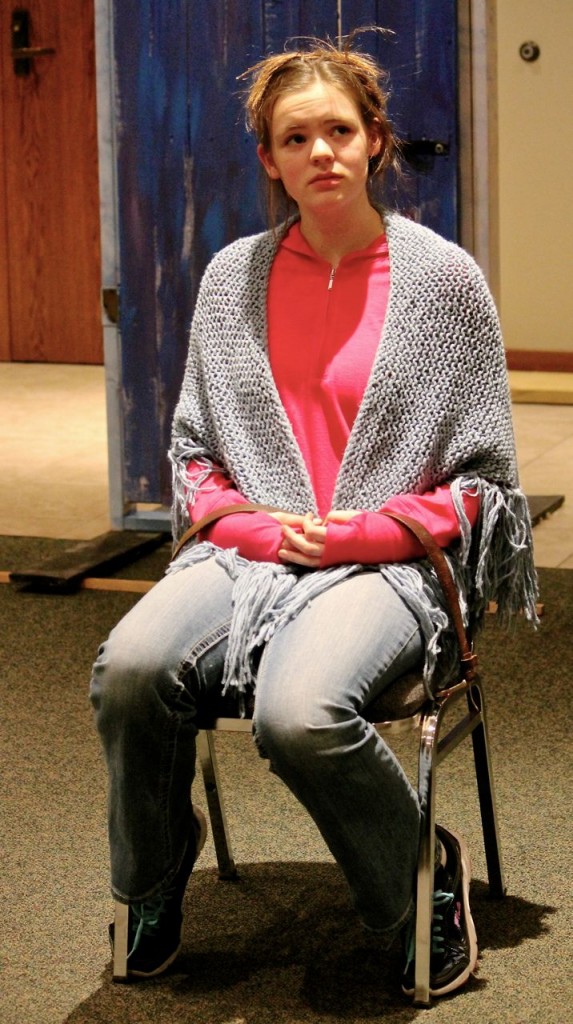 Our lovely heroine this year, Tessa, looks pensive. She should. The villains are up to no good! 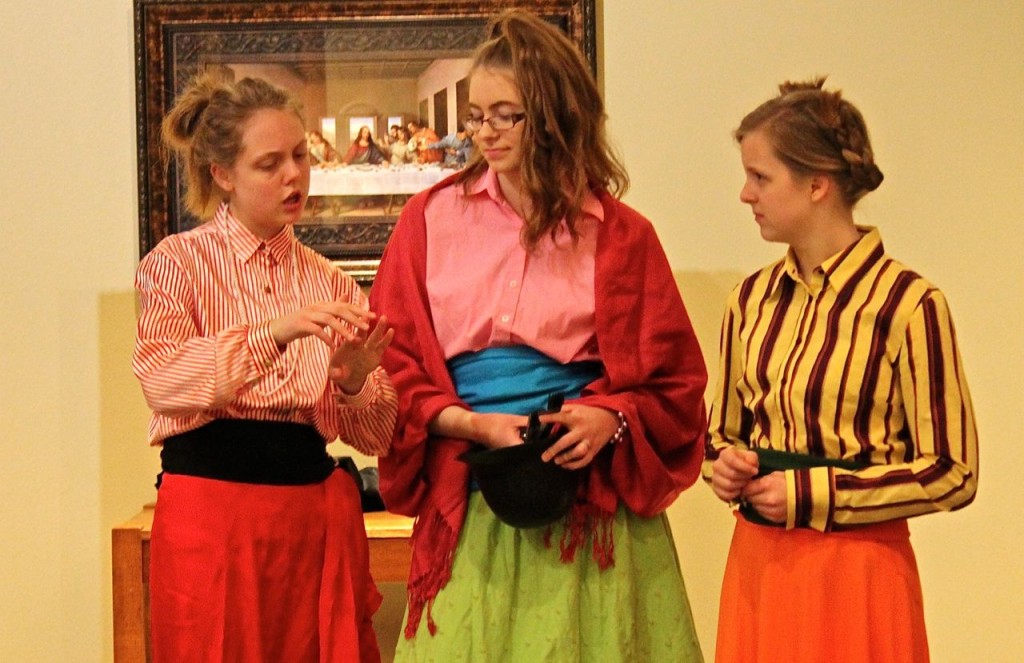 It’s not easy to help these sweet girls be sketchy barflies!

During our rehearsal run, everybody’s lives still go on at home, too, of course. These kids are great at making time for rehearsals and memorizing lines and coming up with props and costumes. I couldn’t ask for a better group. But I know that their lives (and mine) are busy at home, too. Schoolwork must be finished and instruments must be practiced and chores must be done. Loved ones get sick and hard things happen at home, sometimes. A lot can happen in the few months that we have together. 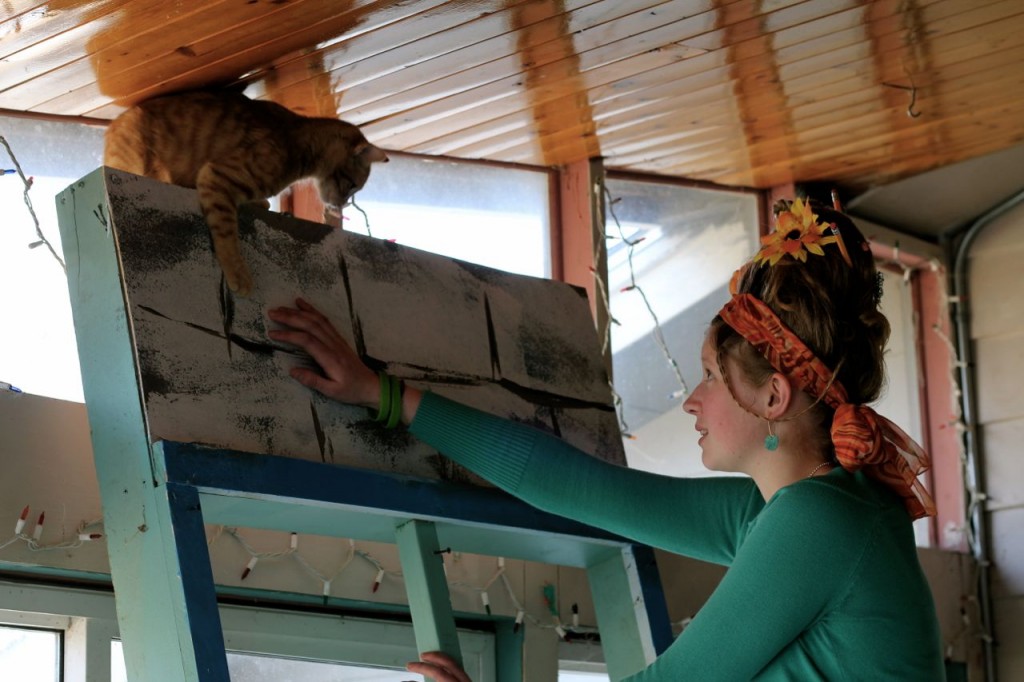 Our kitty Lolo finds a special spot on top of one of our set pieces.

I do feel blessed to be able to be involved with this every year. To have such fun with such a jolly group of kids, and to remind our community that Virtue, after all, Always Triumphs in the End!