I have learned a lot about chicken pox this week, to wit:

Did you hear about Nick Wallenda, by the way, who achieved his dream of walking a tightrope across the Grand Canyon? I think he’s awesome. Insane, but awesome.  Don’t you?

Pity my poor son Timothy. He’s 18 years old. He works as a computer web-designer-code-fellow-geek-person (his co-workers call him “The Hackstar”).  He has the chicken pox.  For the second time. 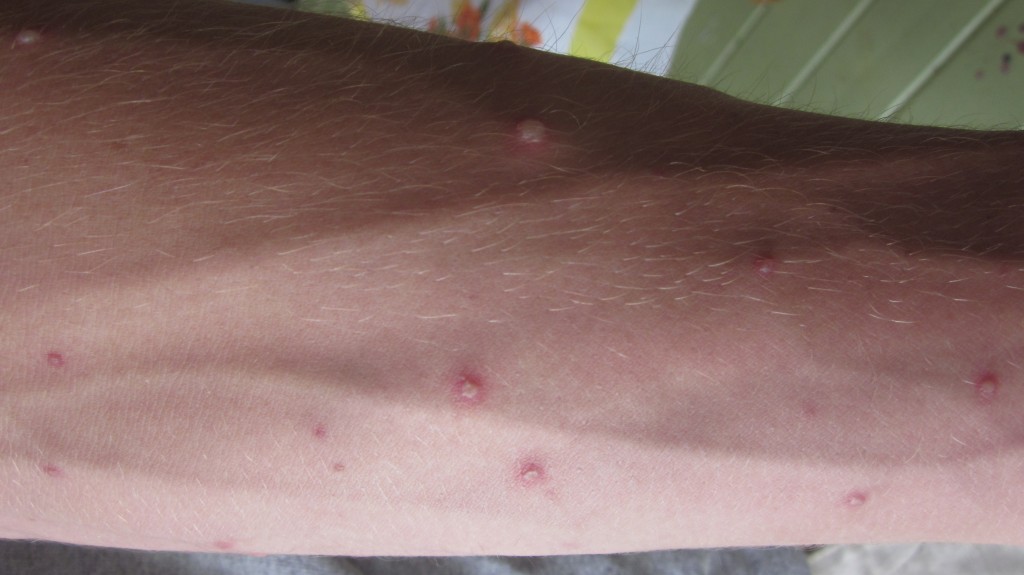 Here are some chicken pox on Timothy’s arm. He wouldn’t let me photograph his face, which (in fact) was much more interesting in its range and size and number of spots.

We have six children, and I can remember each of their individual cases of chicken pox. Timothy has the dubious honor of having the most memorable case.  He was a baby, just short of his first birthday, and we took off to South Dakota for a summer vacation.  I remember the evening before we were set to leave, I was outside planting some petunias in my flower bed. I didn’t want the potted annuals to perish while we were out of town.

Little Timothy was sitting right with me in the flower bed, digging up the roly-polys.  I glanced over and noticed that mosquitoes were buzzing around him, so I scooped him up (leaving those petunias to wither away–the sacrifices I make for my babies!) and went inside.  The next day, when we got up, I noticed that he had bites all over his face, and mentally kicked myself for not having taken him inside sooner.  We left on our trip, and at dinnertime we stopped at a Pizza Hut for a meal.  A man passing by our table stopped and studied little Timothy’s face, which was well broken out by this time.  “Chicken pox?”  He asked.

The man looked closely at Timothy’s face, gave me a look, and walked off.

I studied my baby’s face.  The man, obviously, was a boor.  They were mosquito bites—right?  But that man set my mind in motion, and by the time we set up camp later that evening, in a beautiful South Dakota State Park, we had come to the conclusion that our little boy had the chicken pox, after all. The Pizza Hut man was right.

The park was rustic (it didn’t offer many services), and we were tent-camping.  We were fortunate in that little Timothy didn’t need much besides a couple days of cuddling with his mama, so we changed our travel plans and stayed put at that park, as I nursed our sick little baby through the fever and the misery of the early stages of that illness. There was this beautiful red canyon in the park, and I remember sitting and holding my little fella, praying that God would heal him quickly, and counting it a blessing to have something so lovely to look at.  The older kids–Matthew, Andrew, and Bethie were completely happy with the practically-empty park (the “rustic” parks aren’t the busiest ones, apparently), a playground nearby, and parents too preoccupied with a sick baby to over-supervise them.

All in all, it was win-win for everybody but baby Timothy. 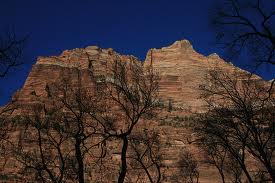 Once Timothy was feeling well enough to travel, we took off to see the sights in South Dakota, but I’ve never forgotten his memorable case of chicken pox.

South Dakota, by the way, is well worth a visit. It’s one of my favorite places on earth.  Even the crowded tourist attractions aren’t crazy-crowded, if you know what I mean.  The Needles are one of my favorite places on earth.  I love Mount Rushmore and the Badlands are awesome in their spooky starkness.  If you have a chance, go there! A place that promotes a castle made entirely out of corn is just okey-dokey in my book! 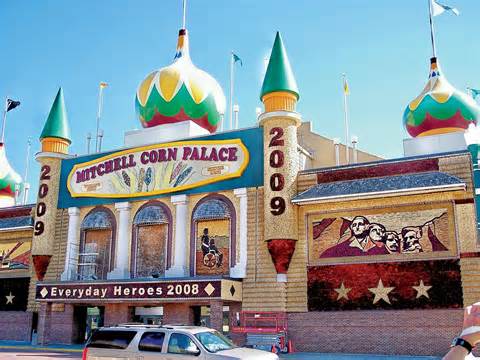 The Corn Palace in Mitchell, South Dakota, is well worth a visit!

From the official Corn Palace website: “The World’s Only Corn Palace is an outstanding structure which stands as a tribute to the agricultural heritage of South Dakota.

The original Corn Palace, called “The Corn Belt Exposition” was established in 1892. Early settlers displayed the fruits of their harvest on the building exterior in order to prove the fertility of South Dakota soil. The third and present building was completed for it first festival at the present location in 1921.

The exterior decorations are completely stripped down and new murals are created each year. The theme is selected by the Corn Palace Festival Committee and murals are designed by a local artist.”

Awesome, huh? But anyway–to recap–baby Timothy had a good case of chicken pox that summer.  We all remember it.  He recovered and didn’t look back. One of the more unpleasant rituals of childhood–having chicken pox–check! Done! 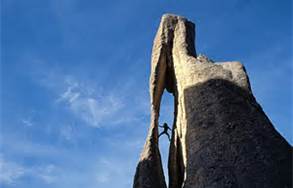 The Needles area of South Dakota: I could stare at it for days.

“What are those?”  I asked, staring at the spray of bumps across his face.  None of my children have had acne, just the occasional pimple now and then.  This looked like acne.

“Just pimples, I guess,” he said with a shrug.

“But you never have pimples,” I said.

“I know,” he said. We stared at each other for a moment, and as we did, he reached up and scratched his side.  Timothy’s cousin Luke had been suffering from the chicken pox, and this fact occurred to me at this time.  “Do you have any other ‘pimples,’ say, on your side there?” I asked.

We stared at each other silently.  “I’ve already had the chicken pox,” he said.

“You have the chicken pox now,” I said, finally.

“But I thought I had them when I was a baby,” he said.

This is one tricksy-virus, the varicella zoster virus, which causes chicken pox.  At least it’s pretty obvious when you’ve got it.  You’ll get red itchy bumps on your skin that look a lot like acne, which will quickly change to look like blisters. 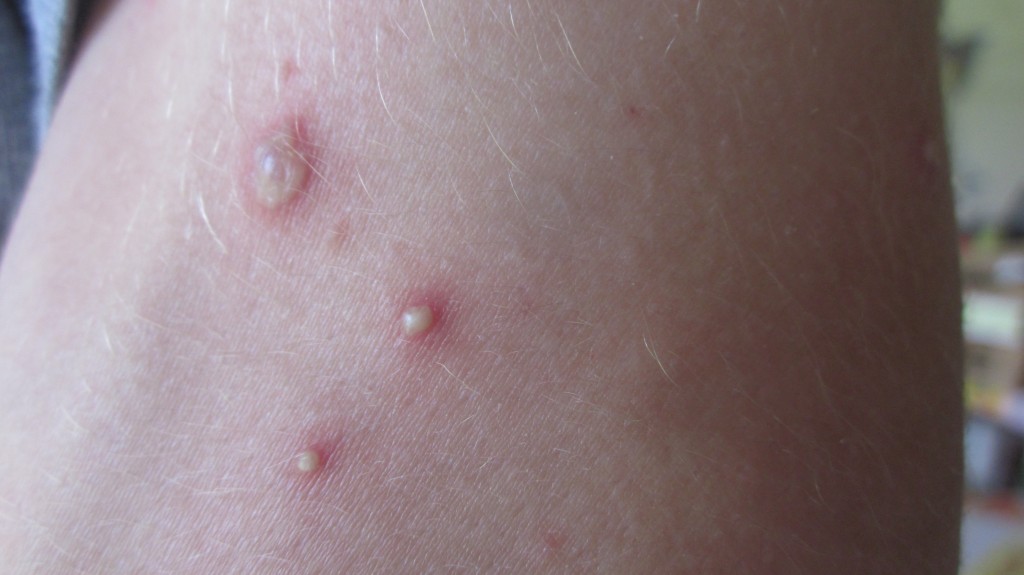 Here the red bumps have blistered out.

Within a few days of the blistering, the blisters will begin to scab over, and when every last blister is scabbed, you can assume that you can no longer pass on the virus.

All this misery isn’t the worst of it, though. The bumps are very itchy, and usually they are accompanied with fever, sore throat, exhaustion, and so forth. Poor Timothy. In his self-effacing way, he had suffered for several days before he mentioned it to us.

It has been many years since I’ve helped a child through the chicken pox, and I had to remind myself of what to do to comfort him. Of course meals were brought to his room, and we ran to the store for fudgsicles, ice cream, and ginger ale, all comfort foods here.  We tried many things to help Timothy with the itching, and one thing worked so well that I decided that it might be good to share it with you all, Gentle Readers.  You never know when one of your loved ones might need some comfort measures for chicken pox. Even when you thought you were through with all that.

We actually tried many things to help with the severe itching, but Timothy said that one thing was the best (here comes the secret knowledge part of this post) and that was the combination oatmeal bath with baking soda which brought him the most relief.

The best way to take an oatmeal bath without having to take hours to scrub your bathtub afterwards, is to make an oatmeal stocking.  This is a very simple thing to do, and I’ve got to give my sister Anne the credit for this.  She was helping her son Luke through the chicken pox, so she shared this with me. (Thanks, Sister! :)) 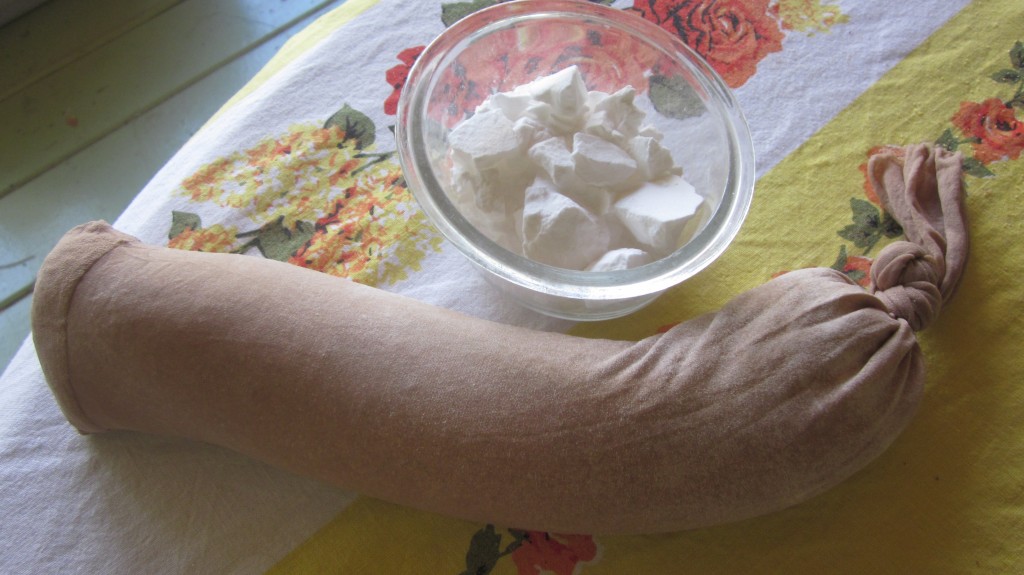 Here are the raw materials for chicken pox relief: baking soda and an oatmeal stocking.

You only need the following:

Here’s what you do to make the ingenious oatmeal stocking: I asked my daughter to help with this step of pouring the oats into the stocking: it does take an extra hand.

Turn on the bath as hot as your child can stand it, and pour the baking soda under the running water, swishing it around as you do so.  Then hold the oatmeal stocking under the running water, and squeeze it to release the starch from the oatmeal.  Leave the stocking in the bath as your child takes a bath, and encourage him to squeeze the water from the stocking over his face and other itchy areas. 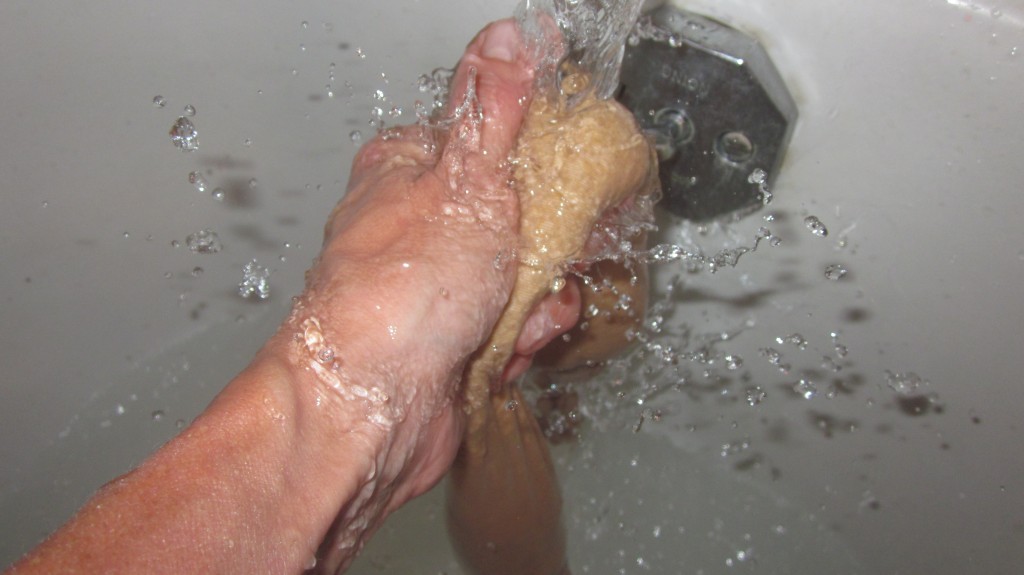 Squeeeeeze that stocking and watch the oatmeal release its starchiness into the water!

In the early days of his illness, Timothy took a couple of long oatmeal baths each day, and he said that the effects of the anti-itchiness lasted for several hours.

Since I would have done nearly anything to help him feel better, I was happy that this was actually quite a simple thing!

So if your child or other dear one catches the chicken pox (or catches them again), be sure to try the baking soda/oatmeal stocking approach.

It certainly was a relieving thing for Timothy, and it was easier for me than walking a tightrope across the Grand Canyon!