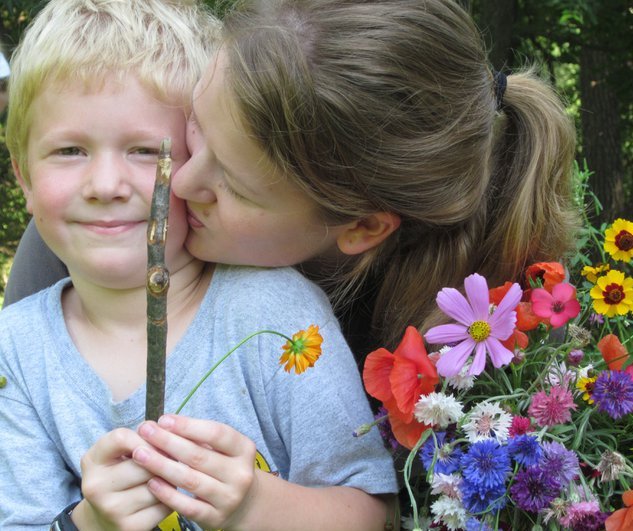 A hug or a kiss or a bunch of flowers–not to mention, a unique stick–can sure make a gal feel special.  Maybe it can even help her get better quicker!

Well, though we haven’t been more ornery than usual, we’ve got it:  my family and I have the flu. Or something.  Some awful bug.  Son Timothy has been sick for several days, and in fact he thought he was getting better yesterday, but today feels worse again:  sore throat, headache, raspy cough.  Bethie has been sick for a couple of days, and Bryan and I both show signs of the “creeping crud” too.  Blah.  Yech.

It’s an interesting phenomenon that we can live for months in perfect health and then–bam!!–we’re all suddenly ill, and we’re searching for comfort measures that will not only make us feel better, but get us through it quicker.  Here are a few things we do at our house to make the bug get out of town faster.

1.  Stay home.  It’s astonishing to me how many people play the hero and just keep going, even after they come down with something awful.  Not only is it hard on the body, possibly prolonging illness, but it spreads all the crud around!  I just cringe when I’m sitting in church (or walking through Wal-Mart) and I hear a volley of coughs and sneezes behind me.  I know there are times when you just can’t stay home, but in general people will understand (and appreciate) it if you opt to stay home when you’re sick.  So stay home!

2. Drink LOTS of fluids.  You may not feel like it, but the more fluids you can push down your gullet, the better.  Drink anything that tastes good to you, although (obviously) water or herbal teas are probably best.  We don’t usually buy pop, but whenever somebody in the house is sick, I buy ginger ale, and it seems to make the ill person feel better.  I know it’s mental:  “Mom cared enough to go to the store and buy ME ginger ale.”  Some sources say you should let it go flat before drinking it, but I suppose that’s a personal preference.  Our very favorite sick-beverage this time around is ginger-lemon tea with sliced lemons and honey.  Here’s how you make it:  Thinly slice lemons and add a dollop of honey (raw, if you have it) to a large mug.  Add your tea-bag (ginger-lemon is good, but chamomile is nice, too, or peppermint, or whatever sounds good to you) and pour boiling water over the whole mess and allow to steep for a few minutes.  This is so delicious, and you can’t beat all that yummy lemon and honey.  Sliced ginger is a good addition, too.

3.  Watch Doris Day movies.  This is the hard one for me.  (For example–to my shame–yesterday, though I was feeling quite ill, I . . . you’ll never guess it . . . I cleaned my oven.  Why did I do this?  I don’t know.)  I have a difficult time stopping, even when I’m sick.  I hate staying in bed, even though my body is telling me . . . Stay in bed, Stupid.  Common sense would indicate that if you’re not on your feet, scrubbing out your oven or whatever, your body will be able to fight the bug single-mindedly, instead of sharing the energy with your foolish antics.  That’s where the Doris Day movies come in.  They are sweet, and inoffensive and delightful, and if you fall asleep in the middle (which would actually be good for you) you’ll always know how they end.  If Doris Day is not your cup of tea (so to speak), watch whatever amuses and distracts you.  Some of our favorite “Comfort Movies” are the following: Dave, Groundhog Day, While You Were Sleeping, Sleepless in Seattle, You’ve Got Mail, and French Kiss.  Last night, we all carried our big mugs of steaming ginger-lemon tea to the couch, burrowed under the blankets, and watched The Great Muppet Caper.  All that laughter is good medicine, to the laughers and the hearers.  Now make your own list, and hit the couch!

4.  Eat Chicken Noodle Soup. Your Grandma, of course, was right.  This is very cool.  A physician/researcher from the University of Nebraska Medical Center, Stephen Rennard, took homemade chicken soup into the laboratory to study the common folk remedy that it reduced the duration of the common cold.  He found that his wife’s homemade chicken soup, indeed, did slow the activity of white blood cells and reduce the inflammation caused by the common cold.  The results of his study were published in the International Journal Chest–the Cardiopulmonary and Critical Care Journal, and the research has been featured in thousands of newspaper, magazine, and Internet articles, as well as on television and radio throughout the world!  Dr. Rennard admits that, even though he has done research all his life on a variety of topics, this chicken-soup research is what he’ll be remembered for.  There’s a charming video of his wife making her chicken soup, and Dr. Rennard talking about it, right here.

4.  Hot water therapy.  Hot water and steam will help loosen a tight chest and help you breathe easier when you are congested.  Draw yourself a steaming hot bath.  Stand in the shower as long as you can tolerate it.  When our kids were little and had the croup, I’d shut myself into the bathroom with them and turn on the faucet and the shower on the hottest water possible.  The room would fill with steam, and they would breathe easier for a time, and sometimes even fall asleep in my arms.  They would also sweat a great deal, which is a good thing, too.  You can also use a humidifier, or for the biggest shot of steamy hot air, throw a towel over a pot of water on the stove. Just don’t burn yourself or catch the towel on fire!

5. Don’t run to the doctor’s office first thing.  When our oldest son, Matthew, was little, we believed the commonly-held myth that the first thing you needed to do when your child was sick was to run them to the doctor.  So that’s what we did (I say this now with a sense of guilt and shame).  The doctor’s job was always to prescribe medication, no matter what, so Matthew was put on round after round of antibiotics.  Poor little dude.  Why did his ear infections keep coming back?  Because his body never did build up the antibodies to fight them!  Duh.  Matthew today is allergic to penicillin, and mildly allergic to sulfa drugs, as well.  I completely blame dumb us for subjecting his little body to all those antibiotics, when–if we would have just let his little body fight the bugs on its own (using the Comfort Measures above), he would have gotten well quicker and wouldn’t be allergic to penicillin today.

Since that time, there has been research that grows every year that modern doctors do prescribe antibiotics (and other drugs) when they are not even useful (as in the case of viruses–antibiotics do nothing against viruses!) or needed.  This is a serious (and expensive) problem.  We learned from our mistakes, and our other five children only were rushed to the doctor when it was really needed (for stitches, broken bones, or other injuries) and none of them have ever been on antibiotics.  So–if they ever have the need for strong antibiotic drugs, chances are they won’t be allergic to them.  You can learn more about getting your child through common childhood illnesses without resorting to potentially-harmful drugs in this book, How to Raise a Healthy Child in Spite of Your Doctor, by Robert S. Mendelsohn, M.D.

So those are the top Comfort Measures we fall back on when we’re under the weather.  What about you?  I’d love to hear what you do for your family and for yourself when you’re sick–feel free to share in the Comments box below!

2 thoughts on “Comfort Measures: Get over that nasty bug quicker this year!”