Here’s our cast from our last play, Life on the Bowery, performing a musical number.

(A version of this article was published in The Old Schoolhouse Magazine and Homeschool Iowa Magazine, with photo credits going to Rebecca Miller and Amy Young Miller.)

My eyes widened in astonishment when, from the darkness of the crowded auditorium, I heard waves of laughter.  The packed-house crowd was laughing at this play that had lost its humor to my husband Bryan and me many rehearsals ago.  They were laughing hard.  They looked as if they’d never had so much fun, in fact.  Mystified, I looked across the aisle at my husband, and our eyes met.  He looked as perplexed as I.  How how this happened?

The kids on stage, our fledgling drama students, had started out awkward and uncomfortable onstage during rehearsals, which had not been surprising.  But after three months of rehearsals, every one of them had gained self-confidence and sparkle, and now, in front of an audience, had blossomed into creative performers.  They were, simply put, a delight to watch. They were having a blast, and it showed.  I shouldn’t have been surprised, of course. I had laid out my fleece.

To be brutally honest, the entire theater idea was borne out of a selfish desire to provide a theater experience and friends for our own children, after a job-related move left us lonely in a new community.  We had left a beloved home school coop group (which included theatre) behind, run by talented and selfless home school moms.  I would sit in awe and watch those amazing supermoms do their work with my children.  Somehow I had the confidence, when we didn’t find home school theater in our new area, to suggest to my husband that we lay out a fleece, Gideon-style.  Gideon had laid out his fleece and asked God to give him a sign.  I had an idea about how we could lay out our fleece and wait for God to answer.  And answer quickly, I had hoped.

“How hard can it be?  We find a script, we rehearse, and then we put on one little show.  It wouldn’t be that difficult, would it?”  I asked Bryan in my wheedlingest voice.  He was working long hours in a new job, so I knew that much of the work starting a theater group would fall on the shoulders of our five children and me.  Well, mostly on me.

“’Fun work?’” he snorted, but after a bit of thought, he gave me the go-ahead.  He knew how much our children missed their friends.  He seemed fairly sure that home school parents in the area were not going to entrust us—strangers to most of them and not exactly qualified to direct theater—with their children.  But we decided that it wouldn’t hurt to try.

Right away I called a local home school mom I had met, and she set the e-mail ball in motion for me.  It was the first of January.  We decided that if we could find ten home schooled students within a week who were interested in doing a play with us, we’d. . . well, figure out what to do next.  It did seem unlikely—it was the middle of the school year, and home school families were already enmeshed in their routines and activities for that school year.  Maybe Bryan was right, and the fleece would come up dry.

But it didn’t.  God provided a very clear answer.  Before the week was out, we had fifteen local home school students signed up and enthusiastic about the new theater group.  I was delighted, and a little scared.  Okay, a lot scared.  I didn’t have the luxury that Gideon took to test God a second or third time.  I knew I was stuck with this frightening prospect of directing these children in their first—and my first—theater experience.  One question stuck in my mind:  What had I been thinking?

Bryan and I had been active in theater in high school and college, and we did have a  predilection for all things theater-related, but we had no experience in producing and directing a play.  But if God believed we could do it, we’d figure it out, I knew that much.  We had no idea at the time how this new adventure would eventually take over our lives, although in a good way (mostly!).  We also had no idea how much fun we were going to have. We were climbing into a roller coaster, one cluttered with half-used tubes of make-up and bits of velvet costumes held together by safety pins, and old ratty wigs and strange bits and pieces of furniture and old junk, and it was going to go screaming up and down, and we were going to cover our eyes at times, shrieking and hollering . . . with fear, astonishment, but most often delight.

We decided on the melodrama genre, which always includes a gallant hero (here played by Timothy Rohda) and a lovely heroine (here played by Bethany Miller) and a sappy proposal scene. This is from “Holder Posey,” and also includes performers Joy Sander and Davey Dovel.

Bryan went to his new job, and I went to work teaching our children, unpacking boxes, and planning our first play.  I picked out a script that fit our cast size, and ordered copies of it.  I wrote a check for the royalty fee.  The home school mom I knew got permission from a local church for us to have our rehearsals there.  I made up a tentative schedule, and we held auditions.

All of this was completely out of my comfort zone, by the way, but I knew that God wouldn’t present this opportunity if He didn’t think I could handle it. Somehow I pushed through my discomfort to lead this eager group of kids.  Thankfully, my children are all extroverted enough to make up for my natural introverted tendencies, anyway.  (Funny how that worked out.) 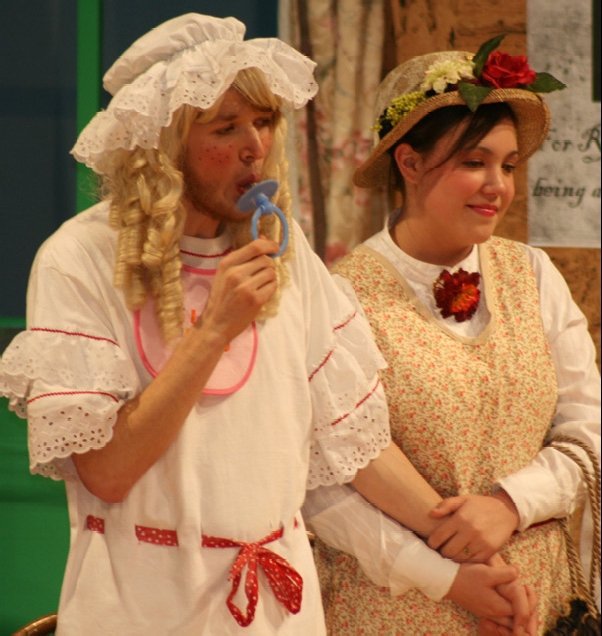 We held auditions, and then rehearsed weekly for three months, doubling up the rehearsals the last two weeks.  We built set on the weekends and shopped for and sewed costumes whenever we had a moment.  Parents were helpful in finding costumes and props and providing snacks after rehearsals each week. We all got to know each other very well, and we became friends.  Before we knew it, it was show night.  The roller coaster ride was almost over.  We printed off programs and put finishing touches on the set.  Our children didn’t want the experience to end, but honestly, Bryan and I were ready for it all to be over.  We had learned a great deal, we had had oodles of fun, but we were tired and anxious to catch up on some chores.  I really needed to clean my house.

Here Monica Claesson, Nathan Canarsky, Adam Dovel, and Anna Wood perform in a musical number in Life on the Bowery.

Furthermore, we didn’t know if anybody would even come to watch our play.  So we were dumbfounded, later, to watch the auditorium fill up, and then at the last minute we had to scramble to find extra chairs to set up in the back.  The performance was a hit.  We were astonished.  Afterwards, the performers lined up in the back and hollered with joy, hugging each other and laughing.  Parents showered us with gratitude.  I felt God’s pleasure.  We had put our fleece out, in faith, and God had rewarded us with this successful production and new relationships with these awesome people.  It had certainly been a growing experience.  We had all been strangers to each other a few months back.  Now, we were a close-knit group.

Here is another scene from “Holder Posey: The Felonious Photographer.”

But even good things have to come to an end, right?  We would pack up the scripts and the stage makeup, return the spotlights, clean up the auditorium, pack away the costumes, and return to our “real life.”   That was the plan.  I felt like I could have slept for three days straight.

The drama kids rushed up to us, excited, after the production, and showered us with appreciation and hugs.  And then they began to chatter enthusiastically about next year’s play.  Bryan and I looked at each other and wondered what we had gotten ourselves into.  “Whaaa . . . next year’s play . . .?” 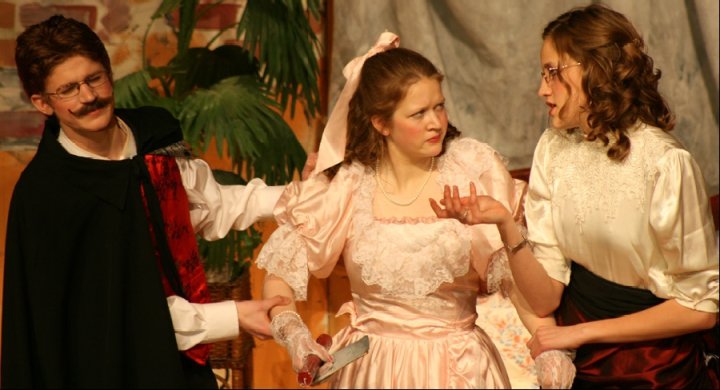 Here Timothy Miller and Abi Wood have a tussle with Bethany Miller, in “Holder Posey.”

Starting that theater group was probably—aside from our decisions to follow Christ, and to teach our children at home—the most impactful decision we have made (so far!).  Not only did God provide for the social needs of our children, He also saw to it that they were schooled in how to become leaders among their peers.  We reminded them to watch out for shy kids or newbies who might feel out of place, and to shower attention and kindness on them.  Moreover, we had unwittingly provided a positive social experience for many home school students in the area who hungered for friends, too.  Our group became a fun social entity even beyond the months of drama, holding parties, bonfires, showers, celebrations.  Now ten years later, we’ve had weddings between drama kids, and a few babies born!   What a blessing!  I am so happy that I listened, all those years ago, when God nudged me a bit and encouraged me to lay out that fleece.

So there’s the short version on how we succeeded at starting our theater group.  We are now preparing for our eleventh year of home school drama, reading scripts, getting the school auditorium rented, and lining up parent volunteers.  We do things a little differently now than we did that first year.  We put on a much bigger show, too, with surprise community guests and musical numbers.  It still takes over our lives for a good four or five months of each year.  We have made countless friends and savor precious memories. 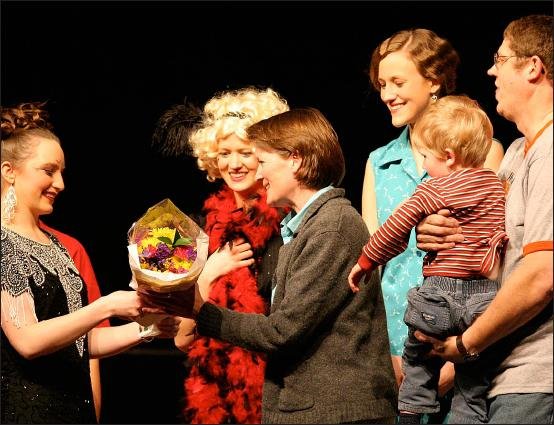 Here Bryan (holding little Mack) and I accept flowers from the cast after the show is finished.

Now that you’ve read my story, perhaps you’re thinking “Yeah, that’s something we might want to try.  Maybe I should put out my own fleece . . .” And perhaps you’re right!  Maybe a theater group would bless the home school families in your area, and some of that blessing will fall onto your own family, too.  And perhaps the roller coaster ride sounds like a fun adventure to you, too! Go for it!

And if you have any questions about how we did it, please don’t hesitate to send me a message.  I am working on a booklet jam-packed full of details of how we started our group, and things that we have learned, and I’d be happy to share it with you if you indicate your interest in the Comments box below! 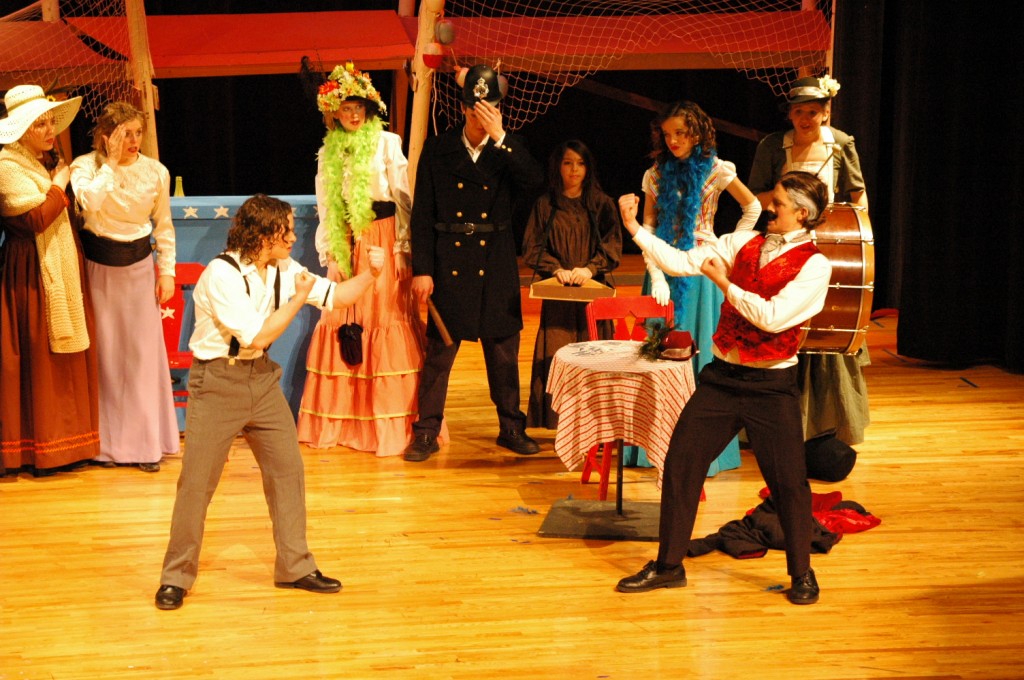 Here the hero (played by Nathan Canarsky) and the villain (James Canarsky) duke it out in an exciting scene in “Holder Posey.“