But I’m thinking that perhaps I do it most of all.

I’m talking about procrastination.  I’ve been putting off writing this post. . . . . because I am such a wretched procrastinator. I am so bad at putting off things that I should do but don’t wanna do that I’ve paid late fees from it and worse.  Yes, I’ve lost money, I’ve endured the jeers and taunts of those I love, and I’ve lost countless hours of sleep.  I’ve probably encouraged a number of gray hairs and wrinkles to emerge, as well, all because I procrastinate.

All this worrisome procrastination came to a screeching halt earlier this month, however.  I found a cure, Gentle Readers, and today I’m sharing it with you.  I was tossing and turning one night when I should have been sleeping like a lamb, after the arduous day I had had.  What should have been a restful night turned into a miserable night of anxiety as my harassed brain ran over all those things that I had been putting off. I decided that I had had enough.  Something, it was clear, needed to be done.

Return the defective camera.  Go get your wedding ring re-sized. Make that appointment for that test. Find straw for this summer’s mulch. You know the list.  You’ve got one, too, don’t you?

Please say you do.

I got up early the next morning, as is my wont, stumbled about to the kitchen, and the first thing I did (after pouring myself a fortifying cup of coffee, and liberally lacing it with sugar and cream–I needed the courage) was to make a list.  The List. The Ultimate Procrastination  List.  The List of everything that was bugging me, everything that I had been putting off for weeks, months–in some cases (hanging my head in shame) years.  The list of niggling, bothersome little chores that was continuing to rob me of a good night’s sleep.

This little monkey looks as though he could, indeed, prove troublesome. (image Wikipedia)

Call about the water softener.  Set the date for Tim’s party.  Clean out the basement ‘fridge. Call Sandy about the roof.

It felt good to write it all down, and I filled a long yellow index sheet in one, feverish, cathartic session.  I had my list of 30-some things that I had been procrastinating over written down in less than ten minutes. It was that close to the tip-top of my brain. I’m quite sure I’m the Worst Procrastinator on the Planet to be able to do this.  I could have written down more, but I decided that 30-some things was enough to tackle for now.

But enough. I was ready. Ready to throw this bothersome monkey (or in my case, all these bothersome, irritating, worrisome monkeys) off my weary back and then to look myself in the eye again (so to speak), to be able to sleep soundly at night once more, knowing that I had done my best to accomplish all these things that really needed to be done. By me.

Because, as you know, sometimes–although you don’t wanna do it–you’re the one who’s going to have to do it.  Putting it off doesn’t change that.  You’re the one.  Nobody’s going to rescue you.  Alas.  Alack.  (Just the annoying part of being a grown-up, I guess.)

This little fellow looks like he could give you a run for your money. (image Wikipedia)

But simply writing it all down alone doesn’t get all those things accomplished, either, as you well know.

I had to come up with a plan, and since I’m a praying person, the first thing I did was to pray over this list.  “I have set the Lord always before me.  Because he is at my right hand, I will not be shaken.” –Psalm 16:8

Then I looked over my list, and did me some thinkin’ and a bit of planning.  I reckoned–with all my daily responsibilities and chores–that I could do four items a day, if I planned carefully.  None of these tasks should take more than an hour, I figured, and some only minutes. (I really procrastinate on making ‘phone calls.  I worked my way through college as a receptionist, spending large chunks of each day working an antiquated ‘phone system, and I still avoid the telephone, because of that.)

I was starting to get excited about this project. I was beginning to feel how awesome it would be to have all those naughty monkeys off my back.  I thought up a few rules to the game, because that’s what it was turning into:  a game.  1:  I’d take Sundays off, and 2: I’d set up a big reward for myself (I’m going to take my family out for dinner someplace special, but don’t tell, it’s a surprise!) for finishing it and also, 3: I’d be honest about following through on a big “punishment” if I went one day without accomplishing four of those tasks.  In essence, if I procrastinated on my Procrastination Project, I was going to have to pay for it.  I was going to have to pay for it dearly. 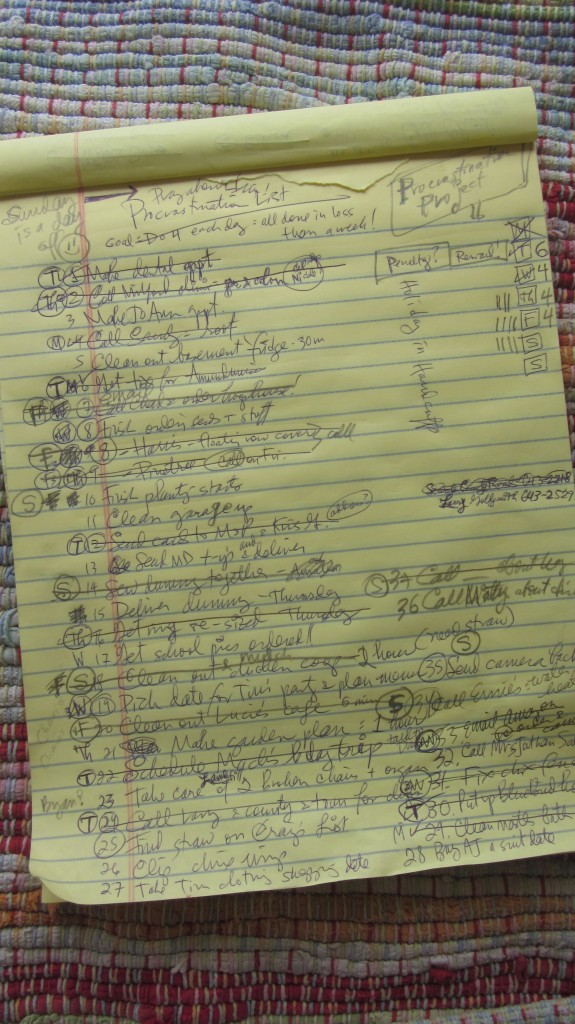 I had to think about that for a few minutes.  What could be so awful that I would push through this procrastination problem and actually get all these little loathsome tasks  done?

Then it came to me–all in a flash–what would keep me on task, as far as this list was concerned. It was a brilliant idea.  It was cruel, insanely cruel, but brilliant.

I got this idea from my son Andrew, the enterprising young artist and blogger otherwise known as AndHeDrew.  His blog is all about creativity and productivity and if you need a little boost or encouragement in those areas, (and who doesn’t?) check it out right here  (you can check out his awesome online comic strip here, too, and see a cute picture of him doing his TED talk.)  Andrew and his wife Sonia do some pretty creative things to keep themselves motivated on tasks that they consider most important.

So I took an idea from their playbook and I decided that if I had to watch the worst movie I could think of, (with no seed catalog or knitting project or sketch book in hand to distract me) that I would do nearly anything to avoid that fate. (I’m like Jemima Puddle Duck–I’m not a good sitter. I knew it would be torture to sit through that movie again.)

I knew that I’d work hard on this list of things that I had been putting off forever, if it meant that I wouldn’t have to sit through this movie again.

(Disclaimer:  and if you are a Holiday in Handcuffs devotee, please skip this:  In our search for good, wholesome family movies last winter, we somehow ended up watching this one.  It was immediately evident to all of us that it was not a good movie in any sense of that word (once again, if you love this movie, then I apologize) but we sat and watched it, anyway.  It was just so poor that we couldn’t take our eyes off it it, and later we decided that its charm was in its awfulness.  But I never want to watch it again. Ever, ever, ever. And there’s really no charm.

This li’l monkey is kinda cute, but the cute ones are oftentimes the most worrisome. Don’t you agree? (Thanks Wikipedia for sharing this image.)

So how has it worked out, you ask?  It has been amazing, actually.  Although I must admit to a few days this week of being under the weather, it has worked like a charm.  I’ve squeezed time out of my schedule (in which I thought there was no more time to be squeezed) and I’ve gotten a lot of things done that I have been putting off for a long, long time.  My mind already is beginning to feel freer, my heart lighter.  Somehow just looking at that list every night and planning which items I was going to do the next day, and then just doing them without much thought or folderol, was easier than I thought.

The family did laugh at me when I wrestled the melodrama dummy into the front seat of our car one evening, because we were driving someplace and sewing the wig back onto that dummy was on The List, but they also understood that they were going to have to share some space with dummy in the car that evening, because sewing that wig on was the fourth thing for me to do, and I was going to get it done.

Are you sold on this idea?  Here are 5 easy steps for you to make this super-simple strategy work for you:

That’s it, Gentle Readers.  If you decide to embrace this rash-yet-brilliantly-simple-system for yourself, in battling those loathsome, procrastinated tasks in your life, I’d love to hear about it.

Get those monkeys off your back!

By the way, I’m going to share this post with the wonderful folks over at The Prairie Homestead. Maybe there’s a few of them who need to make an Ultimate Procrastination List, too. 🙂