I’m explaining why it’s so important to take a few minutes every day to watch, observe, and troubleshoot, and how to watch for red flags in your flock. And what those red flags might be. 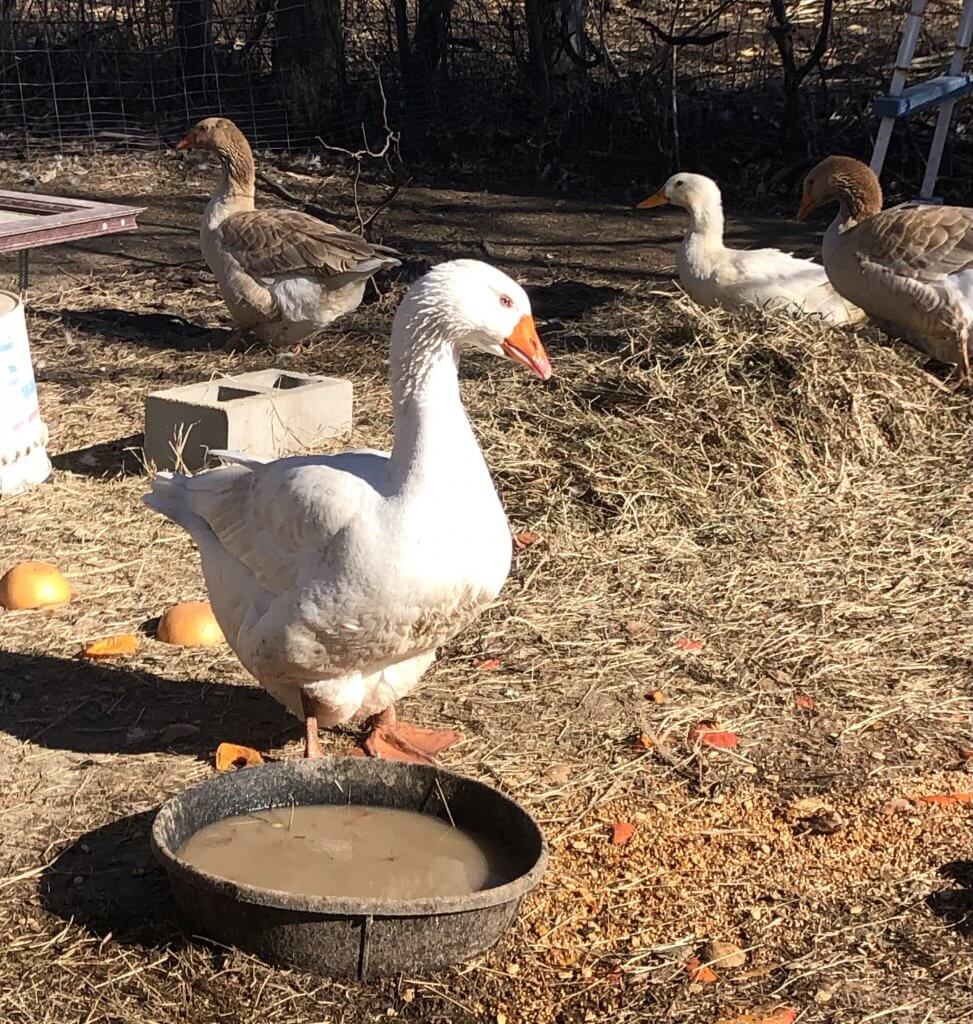 I’ve been sick for several days, so have been (at the behest of loved ones who have had the same ailment, and know me well) trying my best to spend time resting, which leads to ennui.

noun: a feeling of utter weariness and discontent resulting from satiety or lack of interest; boredom: The endless illness produced an unbearable ennui.

This is not me usually, thankfully. In my non-sick days, my ennui-free days, my usual day–if it were filmed, which you’ll thank me that it isn’t–would be one long blur. I hurry and scurry, make lists and schedules early in the morning and spend the rest of the day trying to get them accomplished. Moreover, I huff and I puff.

So it’s not a normal thing for me to stand and watch. I have so much to do, you see. (Watching is not usually on my to-do list.)

How to watch for red flags

However. I’ve learned over the years how important it is–despite my nervous energy– to take the time to settle down for a few minutes every day and watch my flock. After I put out breakfasts, I quench my desire to move away to the next chore quickly, and I stand at the gate and watch my critters start their day.

It may look like I’m being lazy for a moment, or just pausing in my morning’s chores while I stand at the gate and watch my flock eat their breakfast, but I’m actually performing a very important ritual in my animal husbandry. I’m watching for red flags in my flock.

That is: I’m looking for problems. This is how I watch for red flags. If you don’t spend a few moments every day watching your flock, how they interact, eat their breakfast, move about, you’ll never notice when a hen might be lagging or a rooster has gotten a string wrapped around his ankle. Or when a drake is bullying a little duck.

I’ll tell you about a recent experience I had earlier this week, to further illustrate how not taking a moment to watch your flock on a daily basis can lead to possibly-disastrous consequences. Actually, I’ll tell you about two. (Bonus content, baby!)

Despite feeling like garbage, I walked (unsteadily) out do my chores nearly every morning. I knew that Bryan or Mack would do chores for me, but I was hoping that getting that little bit of exercise every day would cut down on the duration of my illness. And I knew that I would see little things that they wouldn’t notice, for example if any of my flock had problems.

On Monday, I saw Thor, my handsome Icelandic rooster, walking, hopping, and limping gingerly around the yard. Oh no. What was the problem? I watched and within a minute or two could see that his spurs had gotten so long that they were scraping him on the insides of his legs, causing them to bleed. Poor fella! Red flag!

Had I not noticed what was happening, there could have been dire consequences for the old boy in a day or two: bleeding and open wounds can lead to infection or worse. I followed him around the yard until I could grab him, then I carried him into my hoop house, where I knew I had a pair of pliers (gulp! Bryan’s pliers, oops). I removed the outer layer of his spurs and he was happier and more spritely immediately. (Watch for a more detailed post about how to do this, coming up soon.) 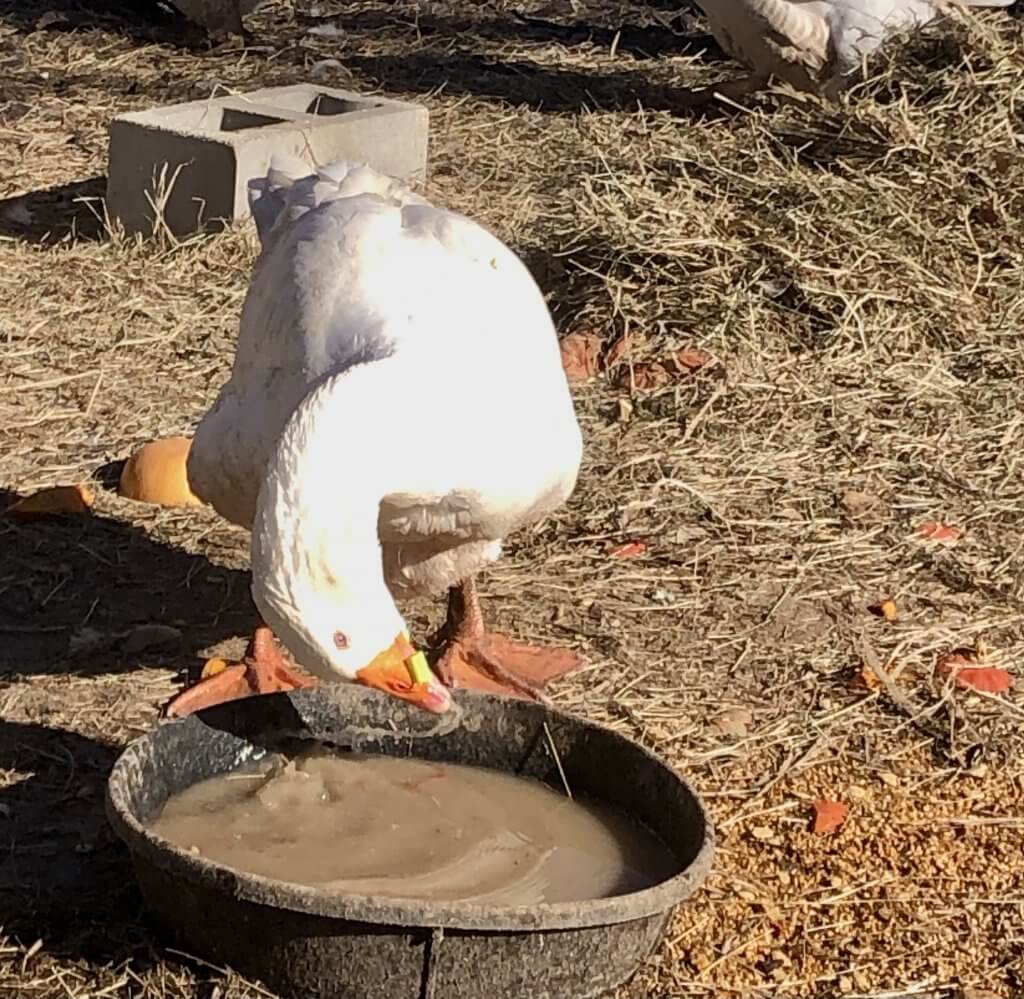 And the very next day

After I opened the back door to the usual breakfast smorgasbord I had laid out, I was surprised that Charles, our big gander and arguably the boss dude of the flock, didn’t rush out of the coop. I stood and waited a minute or two, but he didn’t appear. Hmm. Something was amiss. Red flag!

My first thought: UH-OH. That’s how predictable the big guy is. He does not, EVER stay quietly in the coop while breakfast is being served. A couple of chickens will precede him (Little Red and Speckles, usually) and then he will emerge from the coop, wrestling his way out of the small back door amidst a clumsy flurry of wing-flapping and loud honking, pushing every other critter to make way for him and his two lady-geese (Petunia and Hyacinth). The rest of the waterfowl will spill out pretty quickly after him, and everybody will breakfast together.

I AM HERE! EVERYTHING IS FINE! HELLO MORNING! HELLO THERE EVERYBODY! BREAKFAST! LET’S BEGIN AT ONCE! GET OUT OF MY WAY, HEN! AND YOU–LOOK SHARP!

. . . all in the biggest, blusteringly loud voice. I mean I know my neighbors a half mile away must hear him every morning.

My heart sank and I expected the worst as I moved around the coop to peek in the front door. Would he be lying prostate on the floor? Possibly stuck in the water bucket (it has happened before) or worse? Had the big guy choked on a mouse?

But no. There he stood, strangely quiet, flanked by his two lady geese. He turned his back to me immediately and moved slowly to the back door. Noiselessly.

I was weak and dizzy, but I knew I had to take care of this. I texted Mack, who was in the house, and sat down to wait for him. After all, I can catch an old rooster without much trouble, but I was a little leery of trying to wrassle  our huge gander without help, particularly in my puny condition. 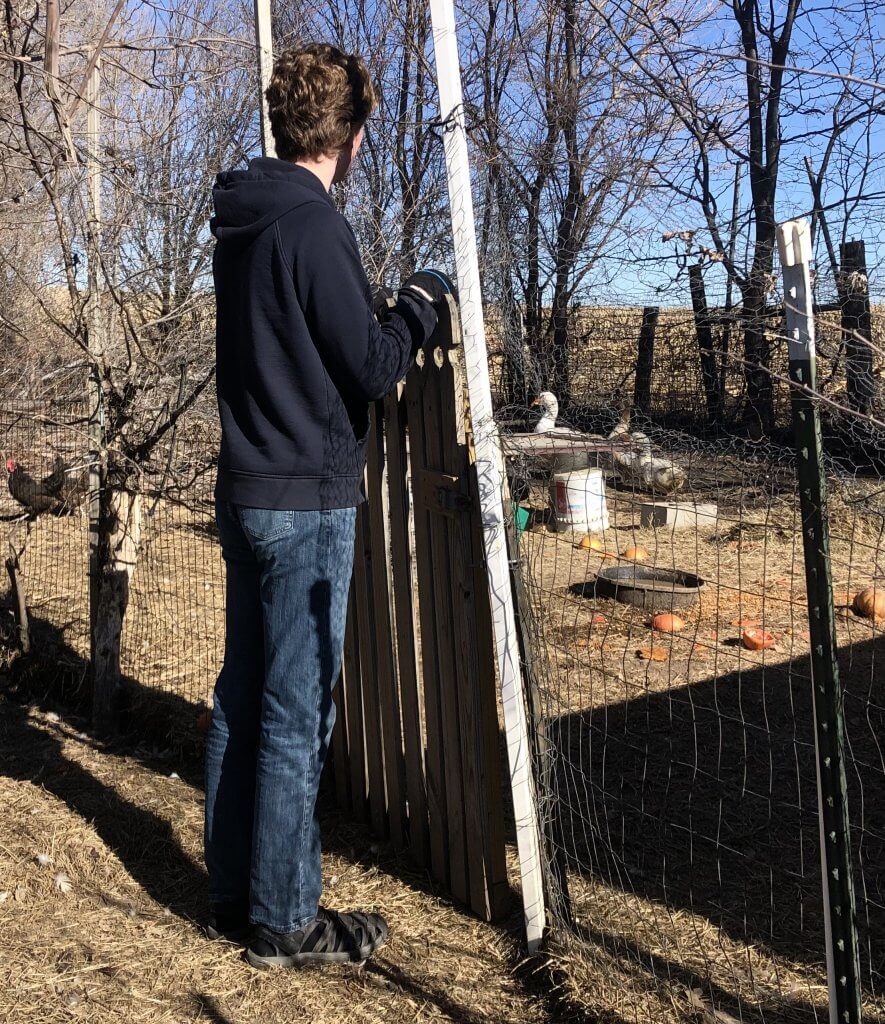 I am immensely grateful for this young man.

Mack was up for it. “How much do you suppose he weighs?” he asked (mentally flexing his biceps, no doubt). “Hmm 30 pounds, maybe 35?” I guessed.

Charles was outside now, digging his bill into a panful of water, but it wasn’t helping to get that piece of plastic off. This was going to take some human intervention, clearly. 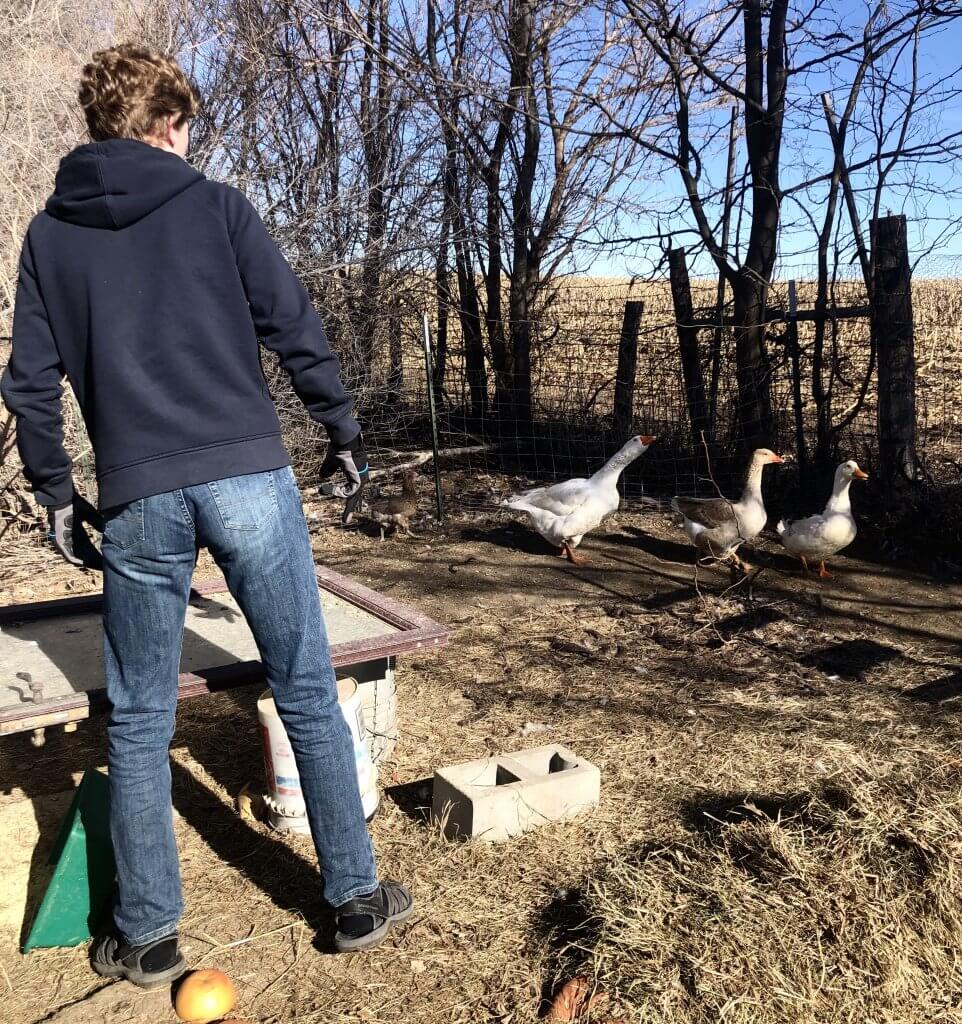 Mack started circling around the yard, and the first thing that happened was Charles frantically calling all his waterfowl friends to surround him. Savvy move, Charles. Very smart to surround yourself with allies. We could, in fact, learn a lot from this maneuver.

When’s there’s trouble, surround yourself with your besties 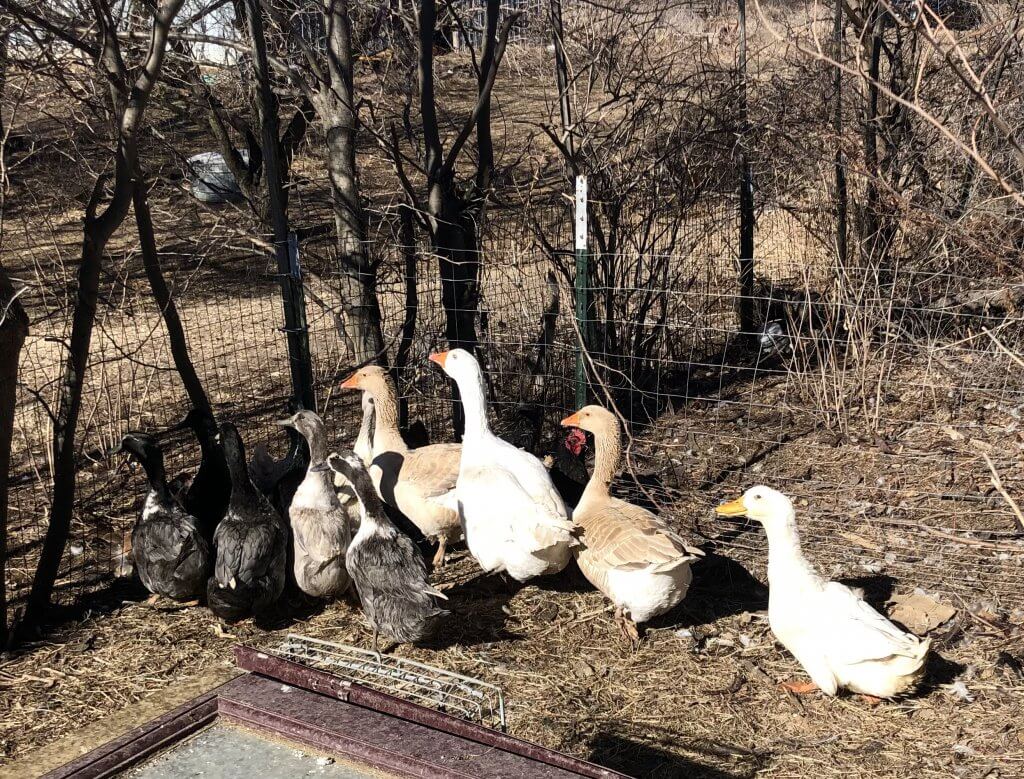 But as blustering and loud and indignant as he was, he was no match for my long-legged boy.

Who caught him in due course. 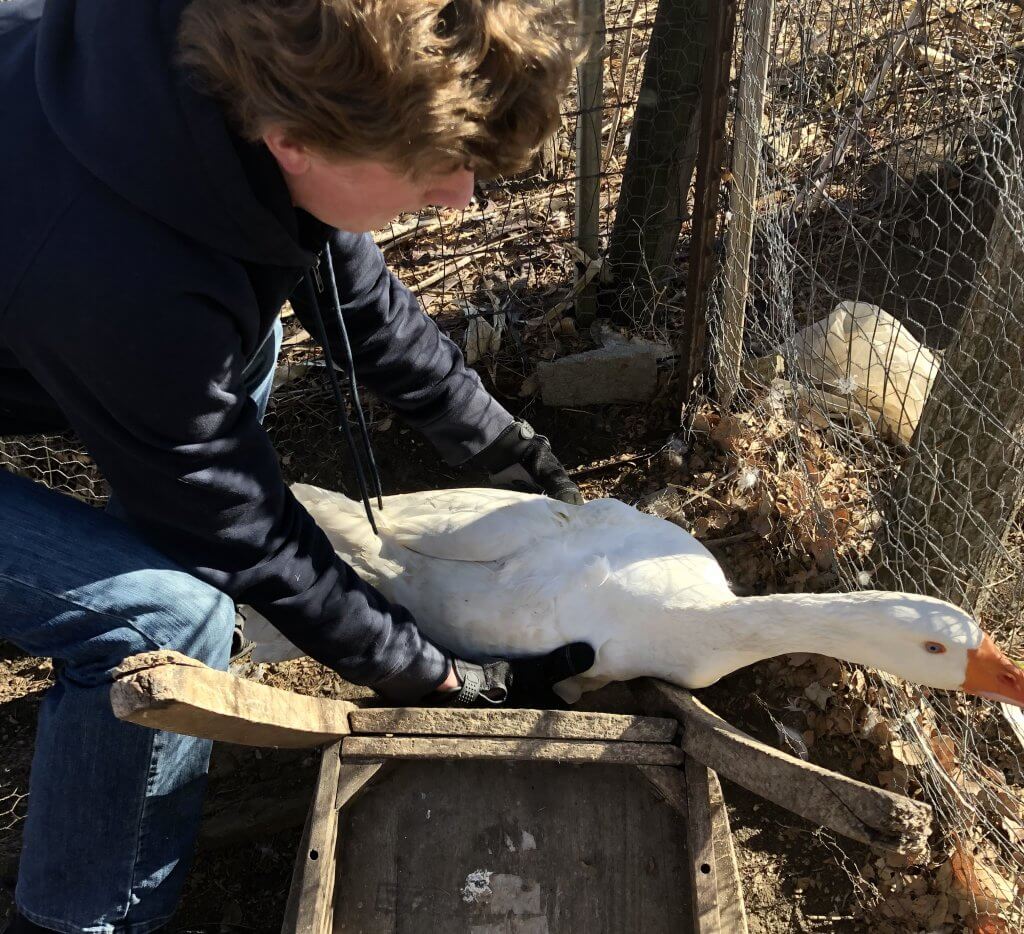 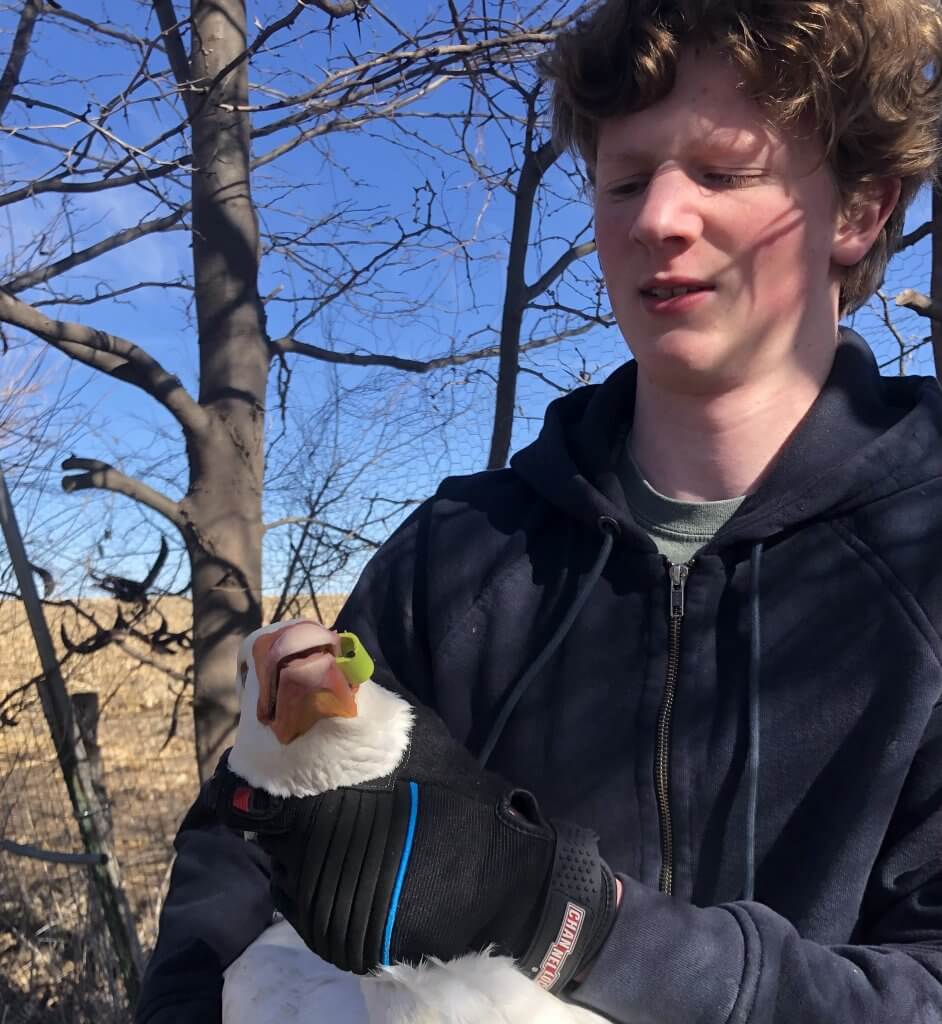 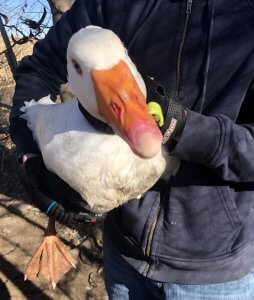 It was a round piece of plastic, probably a segment of a bucket handle. I don’t know how Charles got it so thoroughly affixed to his bill, but I’ll tell you one thing: he was not in a state of ennui. He was fired up about our not removing it.

the condition of being autonomous; having the freedom and the say over what happens to your body. Body-government.

as in: Even the gander instinctively knows that he should have bodily autonomy. 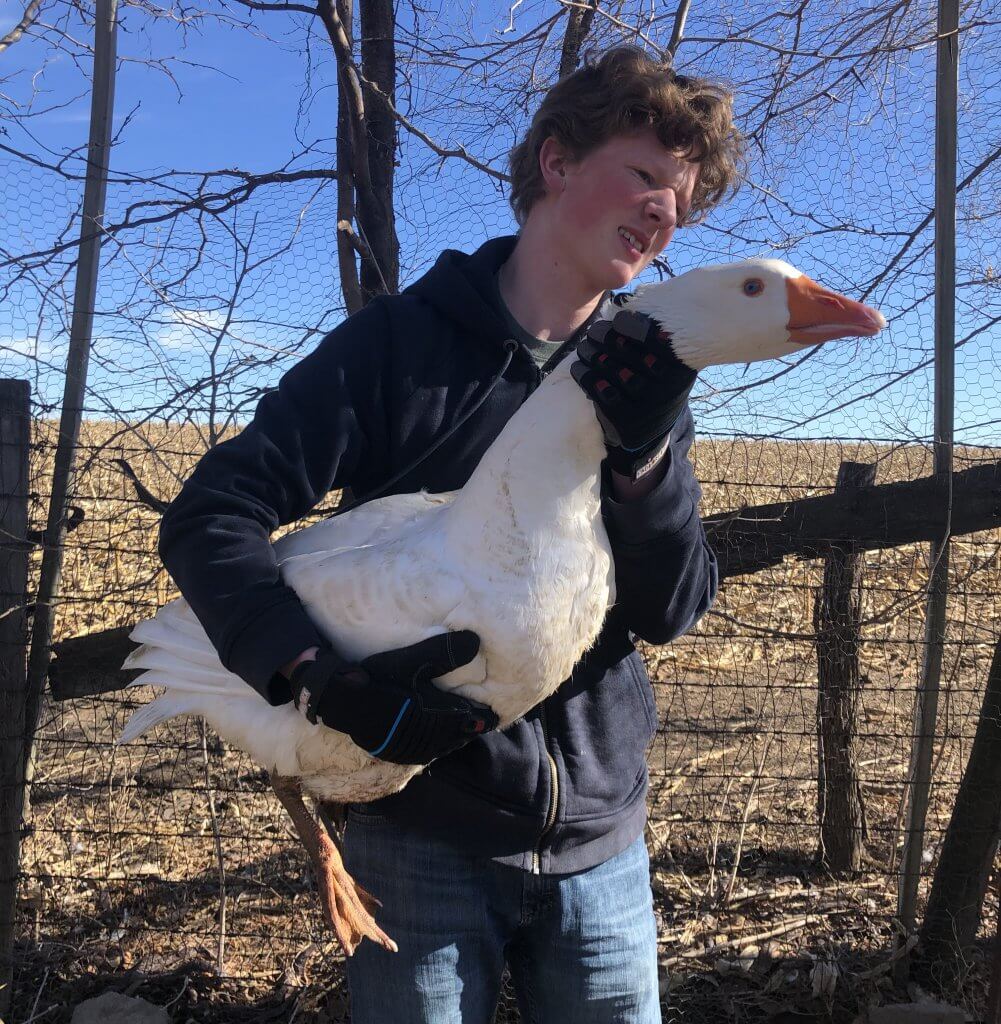 But, after all, Charles wasn’t in charge. It took some muscle, but I was able to wrestle the plastic piece off his bill. It didn’t, after all, belong there, and it might have done some real harm had I left it.

Mack estimated his weight to be closer to 40 pounds. A good time was had, after all, by all.

Some other red flags you might watch out for

That’s it for now, gentle reader. I hope you and your flock (if you have one) are healthy and well, and that you’re getting rain where you live (we’re not), that you have complete bodily autonomy and very little ennui. 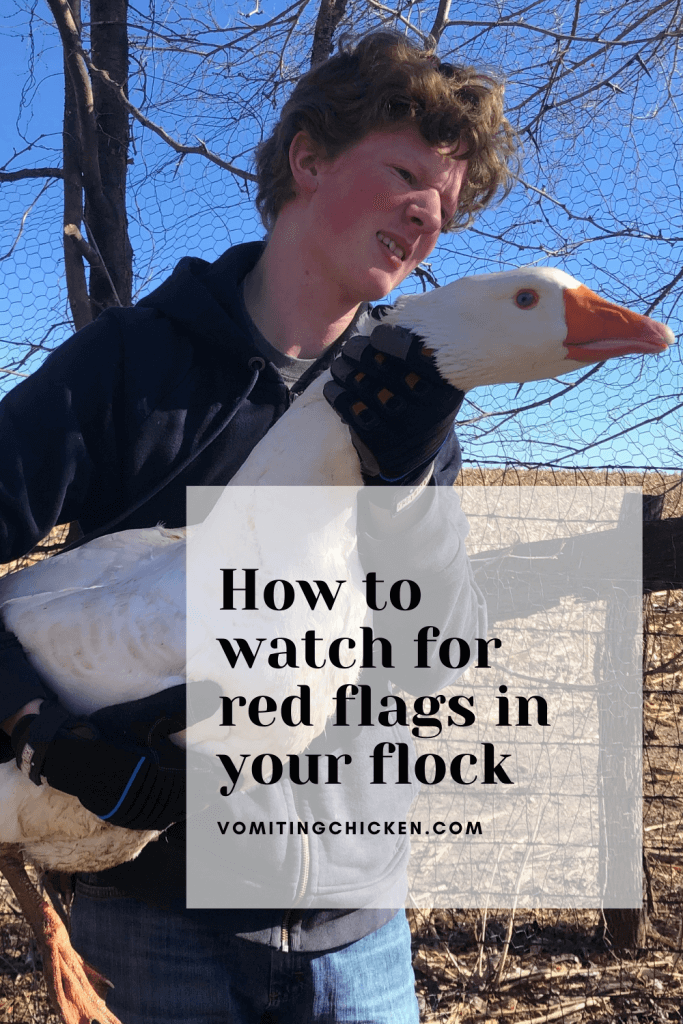