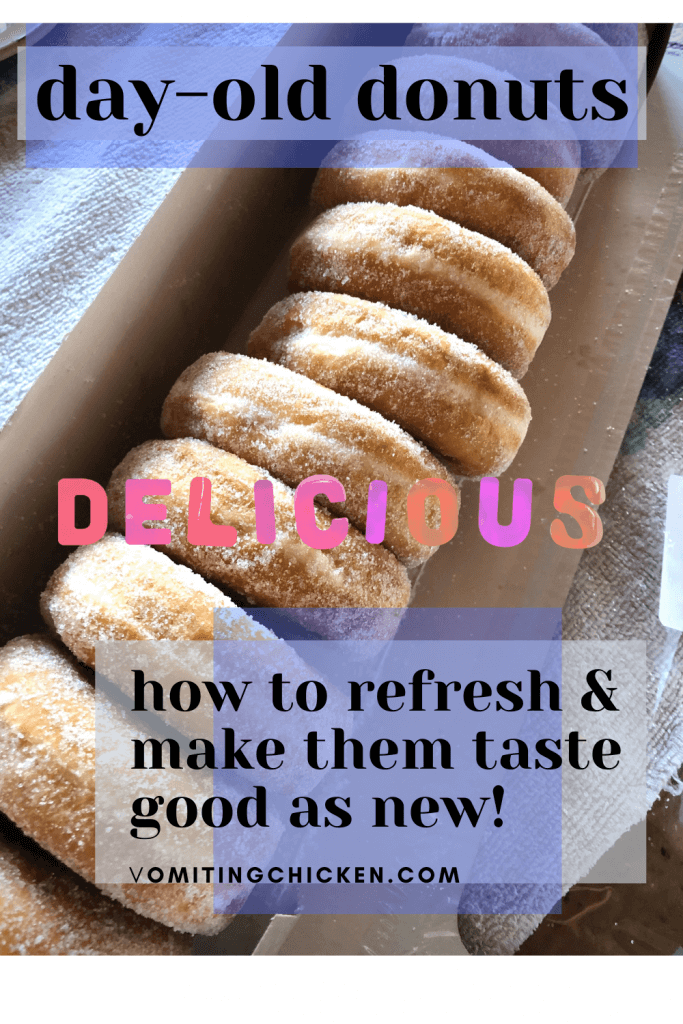 You can go ahead and buy those day-old donuts with a clear conscience, because I’ve discovered how to refresh them with this super-simple hack that makes them taste just as good as fresh, in just a few minutes, without breaking a sweat!

There may be affiliate links in this post, which means that I’ll earn a small commission if you click through and buy something, though it won’t cost you a penny more (thank you!). View my complete legal disclosure here.

I have a confession to make.

To wit: though I like almost every food–from Brussels sprouts to liver and onions to escargot . . . I am a donut snob. I choose donuts with the utmost persnicketiness. I turn my nose up at most store-bought donuts, in fact.

A little story to explain this phenomenon

When I was a young girl, my dad ran a small pharmacy in a smaller town. It was a challenge to make a living to support his growing family, but Mom and Dad loved living there. Mom did what she could to help the business, and one thing she did was to teach herself how to make the best donuts on earth. She would then transport them to the drugstore in time that they could be sold (while still warm) to the 10:00 coffee crowd.

I delivered those donuts more than once, pulling them to the store (which was just a few blocks away) in a little wagon. I remember the hungry, anticipatory looks on the faces of the coffee crowd, as I pushed the back door open and struggled into the store with a tray full of Mom’s freshly-glazed donuts, (again) still warm.

I’m 100% sure they hadn’t ever seen anything that special served with coffee in that drugstore before.

Everybody loved the donuts.

Of course! Mom then held–and still does hold–a stubborn tradition of excellence, and she worked on that donut recipe until it was perfect.

(Say, gentle reader, would you be interested in this recipe? I might be able to wrangle it from that dear lady for you.)

Sadly, Mom’s donuts didn’t save the business, but they are still fondly remembered by people in that town who bought them to dunk into their coffee at the drugstore. Mom’s family and friends, subsequently, who regularly benefited from her donut-making talents remember them fondly as well.

Many years later, when I decided to sell breads and veg from our little farm at a local farmer’s market (I wrote an ebook about it) Mom pulled out her well-worn donut cutter and started making donuts every week to sell, too.

As you might guess, they were the hot item at the market every week, with folks lining up along the block waiting for a chance to get one (or 6, or 12).

We kept records (for our amusement) at how quickly she sold out of donuts every week. (I think the record was 12 minutes.) 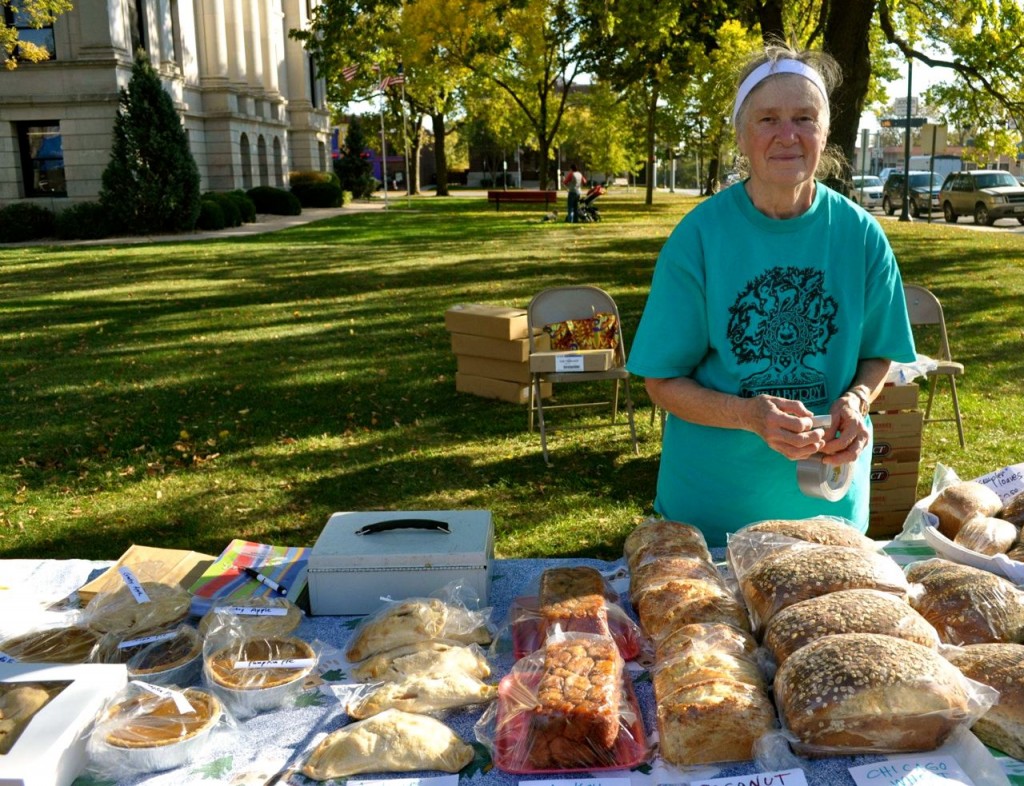 Here’s my mom: wouldn’t you buy donuts from this sweet little lady?

And for good reason. They were the best donuts on earth: big, chewy; they had some heft to them–and with the most velvety glaze . . . oh mama. So good! 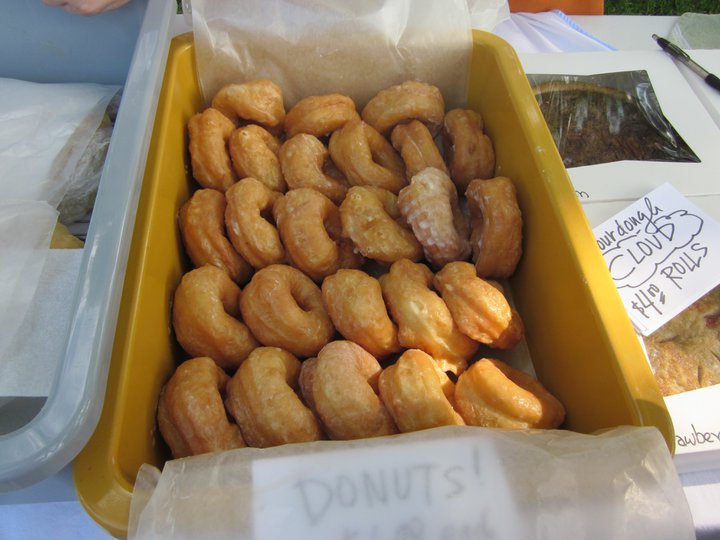 Mom has been making these raised yeast donuts for as long as I can remember. Dad sold them at his drugstore in Nelson when I was a girl.

I’m perfectly justified in being a full-fledged Donut Snob. But. I also understand the time and effort that goes into making homemade donuts. I’m not above buying donuts from the donut shop or the store occasionally.

One day, however, Bryan brought home a boxful of “day-olds” from the store. It was Saturday, and he thought we could serve them with coffee to the little church group that meets at our place on Sundays. Though math is not my strong suit, from my rapid mental machinations, I realized that these donuts would then be . . . two days old.

“Gosh . . . ” my donut snobbery came rushing out of my mouth, though it looked unfortunately like lack of gratitude toward my hubs. “. . . I can’t serve two-day-old donuts to these folks . . . !” It’s not true that I spit on the floor at this juncture, though I heard that rumor myself. Hubs narrowed his eyes, grabbed a donut out of the box with a flourish, and took a bite. “They’re fine,“ he said, a dusting of donut sugar spluttering out of his mouth and powdering the front of his shirt. (Ooops. Somebody was a little attached to his day-olds.)

I wasn’t so sure that they were “fine.”

So I did a little experimenting of my own that afternoon, and—–to my happiness and astonishment!—found a very simple technique with which to refresh day-old donuts and make them taste *nearly* as good as fresh ones!

Exhibit A: a day-old donut, glazed. Looking a little shop-worn at that. 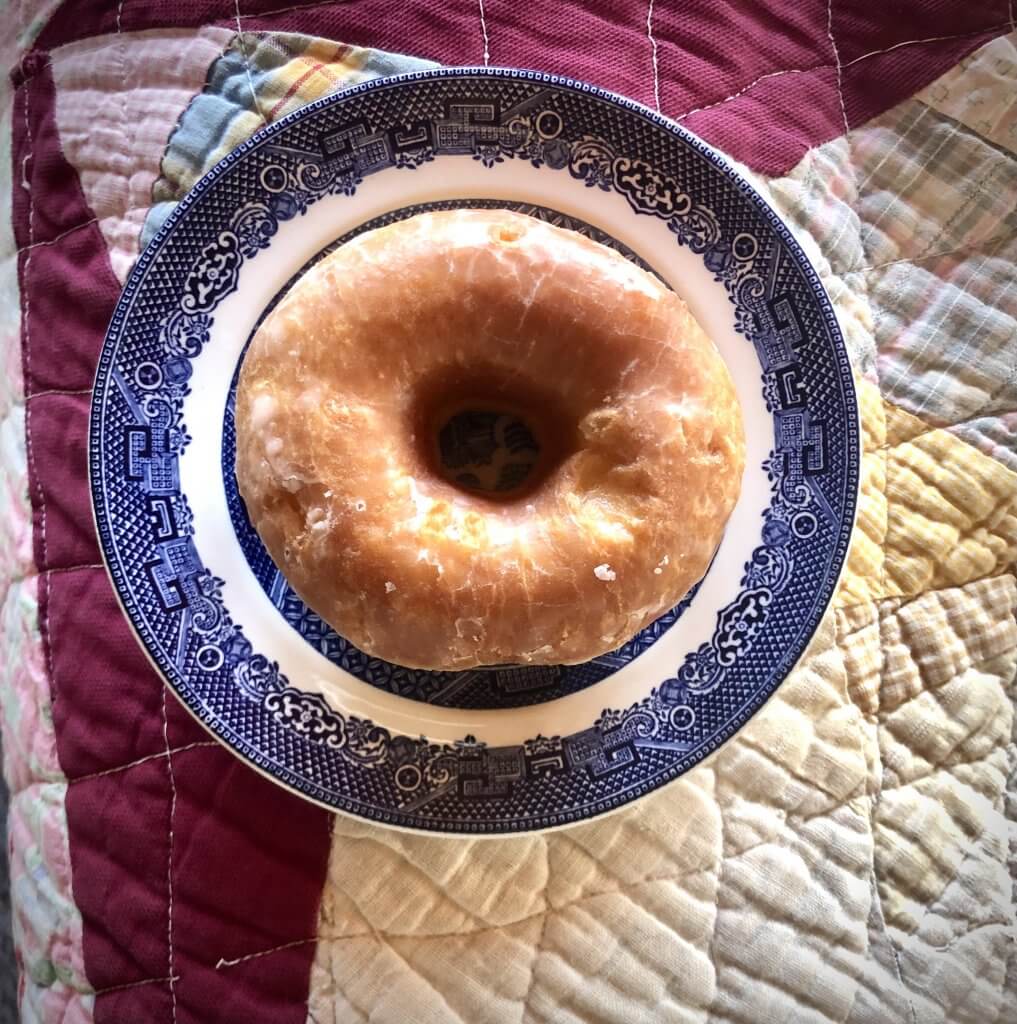 So how do you accomplish this little bit of magic?

This is how to refresh your day-old (or even two-day-old) donuts and make them appear, and taste, nearly as good as the fresh ones. (I’ve only used this method on glazed and sugared donuts. I don’t think it would yield great results with filled or frosted donuts.) (Think of an overly-made-up ancient beauty queen, getting caught in the rain. I think that’s what the ones with frosting would look like.)

I personally can’t vouch for how these donuts will be the next day or the next. They’ve never lasted long enough for me to find out!

Exhibit B: A day-old donut, warmed, and dipped in powdered sugar and cinnamon. 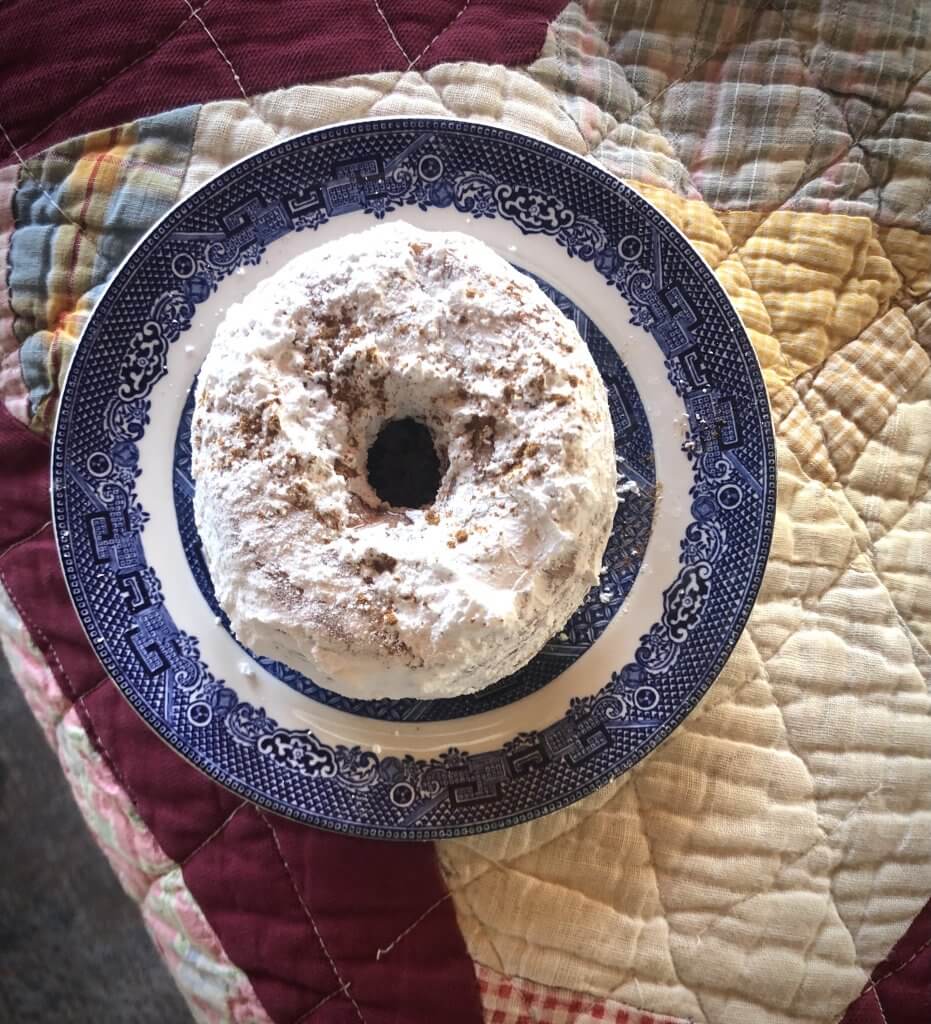 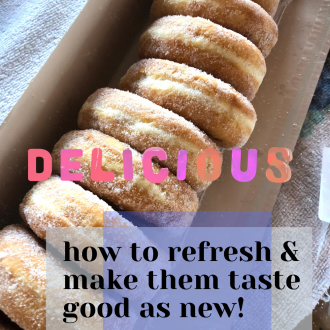 Day-old donuts can be refreshed and made nearly as tasty as new, with this simple method that takes only minutes!
Print Recipe Pin Recipe
Servings 12

Exhibit C: what happened the minute my back was turned . . . 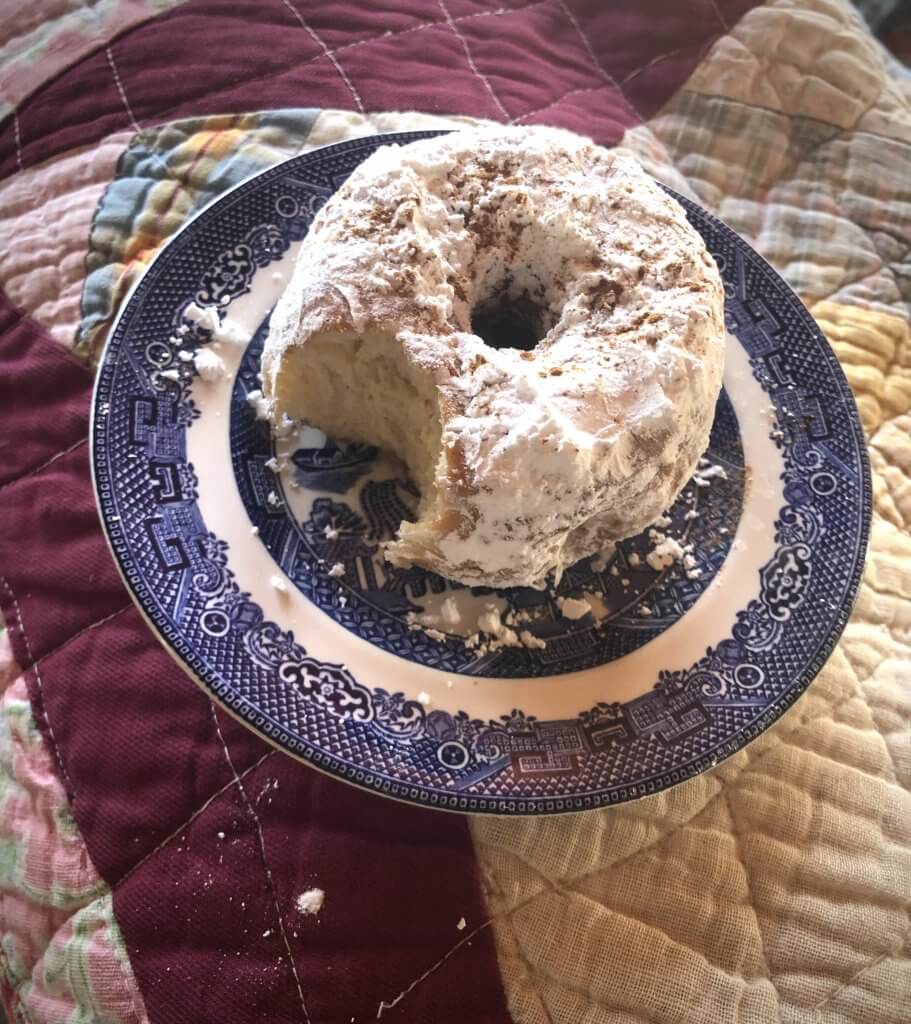 Just in case you decide to foray into making donuts from scratch:

Pin it for later!

Thanks for popping by, gentle reader. I hope this post helped you out in some way, and if it did, could I ask a favor? If you would share it with your friends and relations, I’d be so grateful!

4 thoughts on “Day-old donuts: how to refresh & make them taste good as new!”