It’s hard to believe, now, that it was spring of last year when we had late-winter, record snowfalls which–combined with other factors–spurred the Missouri River to flood out of its banks for months, displacing families and closing down farms and businesses for the entire summer.  It was memorable and extreme, but the memorable and extreme weather conditions of this summer now take precedence in most peoples’ minds. 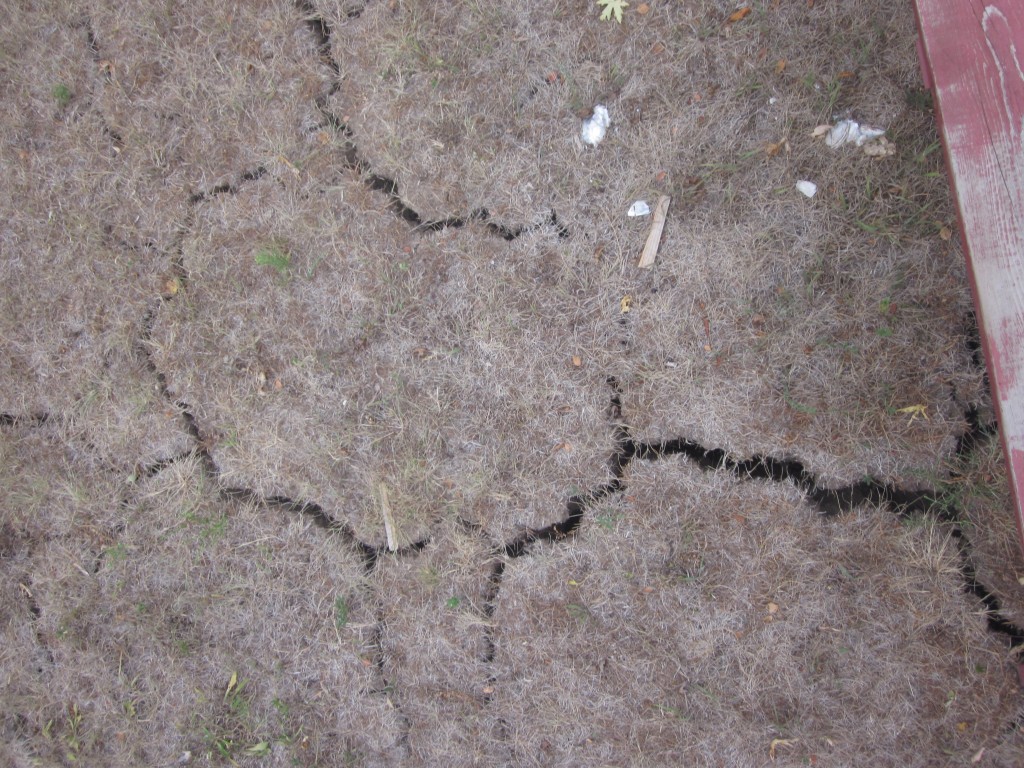 This is what our backyard looks like.  Not pretty.

We traveled past the flooded area several times over the course of last summer, and it was impressive in its scope.  I could imagine how the world must have looked when the flood of Noah’s time occurred.  The water spills out of the banks of the streams and rivers first, and goes wherever it wants to go.  Sandbags and plowed hills of dirt can deter it only so long, before it rises and overcomes.  Higher and higher until everything is covered.  Scary.

This year, whenever I think of all that water, I feel like drooling.  This summer couldn’t have been much different, in regards to water. I should probably explain our tree situation here.  We moved onto our around-8 acres in the year 2000.  If we could have changed one thing about our acreage, Bryan and I would have wished many, many mature trees of every type (except the thorny locust, of course) growing here.  The acres which surrounded our home were mostly treeless pasture when we moved here 12 years ago.  So romantic, right?  The original swaying, blowing, lovely prairie grass of the days of the Indians and the early homesteaders.  Still swaying and blowing, full of wildflowers and prairie creatures.

We set out right away to plant as many trees as possible. With the help of our area NRD, we planted over 300 trees in a windbreak at the north border of our property the first year:  burr oaks, flowering bushes, and three rows of evergreens.  These trees needed an inch of water per week, so we watered on the weekends, but only if we didn’t receive an inch of rain that week.  We were blessed with plenty of children and normal rainfall at that time, so this wasn’t too much of a chore. 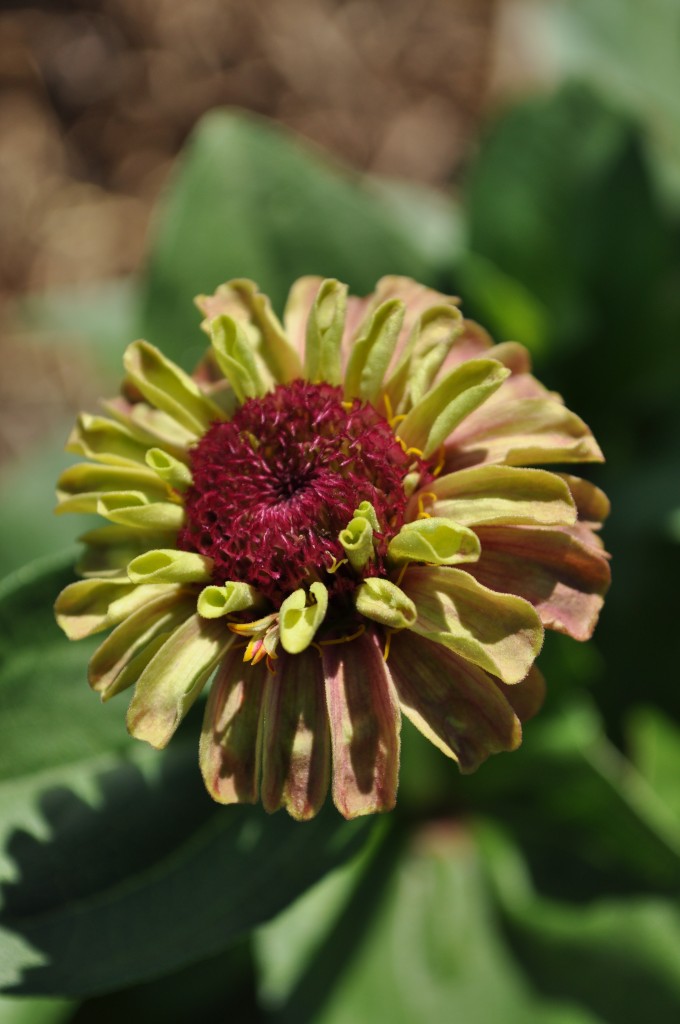 My zinnias don’t seem to mind the drought.

A couple of years later, when our windbreak was looking awesome, we planted more rows of trees—a border of Scotch pines between our acres and the dirt road, a row of Christmas trees intended for eventual cutting, and a line of trees along our south and west property lines, just because we wanted to. Then a couple of years later, we planted a woodlot of thornless locusts, ash, and maple trees, also a row of chokecherry bushes, for jelly-making, and a row of Russian olive trees, just for looks.  Another 200 trees.  Also, we planted a row of crabapple trees on each side of our driveway, and a row of lilac bushes, imagining how pretty all of this would be in the spring. Treeless pastureland, no more!

By this time we had planted probably over 700 trees, thereabouts, not counting all the trees I had personally purchased and placed near our house.  Also, not counting the 30-some orchard trees that we planted early on.  Whew.  You might think we did nothing but plant trees. Are you getting a picture now of our place?  Lots of young trees.

We’d water all the baby trees for the first summer, and then—as long as rainfall was normal–they were good to go.  Sometimes we’d water them during their second growing season, if we had a dry patch.  But rainfall amounts were fairly normal, all those years. The fact that I only planted 25 Northern Catalpa trees this spring, and 25 wild plum bushes, was very small potatoes, indeed.  I didn’t even ask Bryan for his consultation, first (the lord of the mansion does like to be consulted) because this was such a small number.

My good son with the strong back, Timothy, and I planted, mulched, and watered the trees and bushes, I believe, in one afternoon.  No sweat. We are accustomed to watering hundreds of trees at a time, a feat made possible by the fact that my dad has loaned us his little Ford tractor indefinitely, and that he also helped us rig up a motorized watering system.  It’s awesome and beats our old system (trailer full of trash cans filled with water, which we’d dip out of with buckets) hands-down. I didn’t worry much about the Catalpas and the Plums, at first.

We hadn’t received much snow over the winter, it was true, and the springtime didn’t bring much rainfall, either, except for a couple of big rains (over 3”, which generally will fill our pond) in May and June. But when July started out very hot, and we had a long stint with no rain, I started to watch those little Catalpas.  When they started drooping, we’d fill up the big tank of water, and we’d water them and the new plum bushes. July turned out to be the hottest month ever recorded.  July was brutal.  And we received no rain, to speak of.  Week after week of daytime temps in the 100s, and nighttimes that sometimes didn’t even drop out of the 80s, and we scratched our heads.  When would it rain? 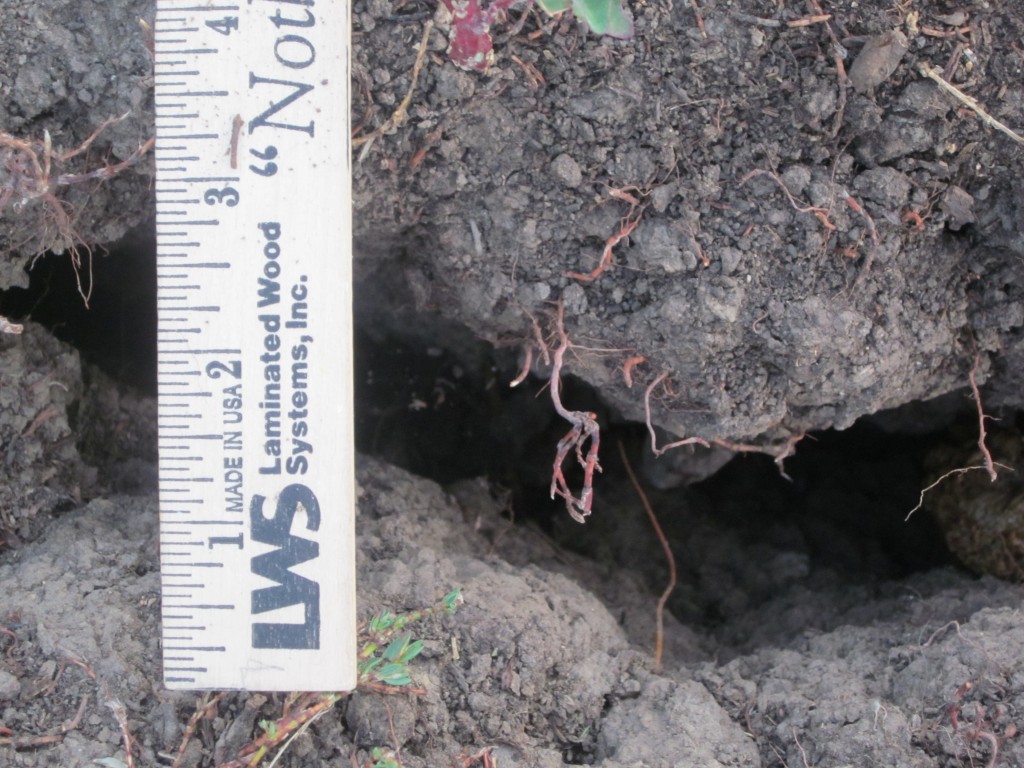 And these cracks are deep, too!  (unintentional, shameless plug for my little brother’s company LWS)

We started paying more attention to the Catalpas and the Plums, but we realized that our two-year-old trees (blue spruces near our property line) were suffering, so we started watering them, too.  Then I noticed on a walk one day that our three-year-old trees didn’t look good, and that the row of three-year-old lilac bushes looked like they were dying.  We started spending even more time watering. Now every weekend we have to decide what is suffering most, and we dump water on it.  We have ten-year-old trees now that are showing stress, and I consider them mature trees.

And there’s still no real hope of rain in the forecast.

Generally I am not a person of melancholy.  In fact, my initial reaction around a sad person, I’m ashamed to say,  is to crack a joke, or to do something irritating to cheer them up.  Anytime we kids were blue, Mom would put us to work. “Go do the dishes.  You obviously have too much time to think.  And don’t feel sorry for yourself!”  Melancholy can be so depressing.

I realize that plenty of bad things happen in everybody’s lives, mine included, and I try to let gratitude for the good things wash away any disappointments I may struggle with. But walking outside every day and taking in the burnt, brown grass in our yard (is it just dormant, or is it dead?) the scary cracks in the earth (you have to watch your step!) and the trees and bushes that are drooping and dropping leaves and wilting from the heat and the drought, is an experience that can trigger feelings of melancholy, even in people who doggedly avoid those feelings.  Like me.

The fields around our place are full of crispy, crunchy dried-out corn.  I think there are ears on the plants, but I would imagine they’re not very big.  Farmers will hurt over this year, but I understand that most have insurance, and furthermore the preceding years have brought one bumper crop after another, so one bad year shouldn’t devastate the prosperous farmers living around us.  I hope.

I want rain more than anything.  More than a three-layer chocolate cake.  More than sushi.  More than a new dress or a new pair of running shoes.  More than a massage.  More than a pedicure.  Rain would change everything.  We could do something with our bits of free time besides water.  We wouldn’t worry about winterkill, or losing vast numbers of our plantings. It will rain, won’t it?  Eventually?  And I will go out and dance in the rain and praise God from whom all blessings flow!  It hadn’t occurred to me in a long, long time how blessed we are, generally, to receive normal rainfall.  Now I think about it every day.

Not everything is brown.  The weeds still thrive.  The fall sunflowers are a bright spot. 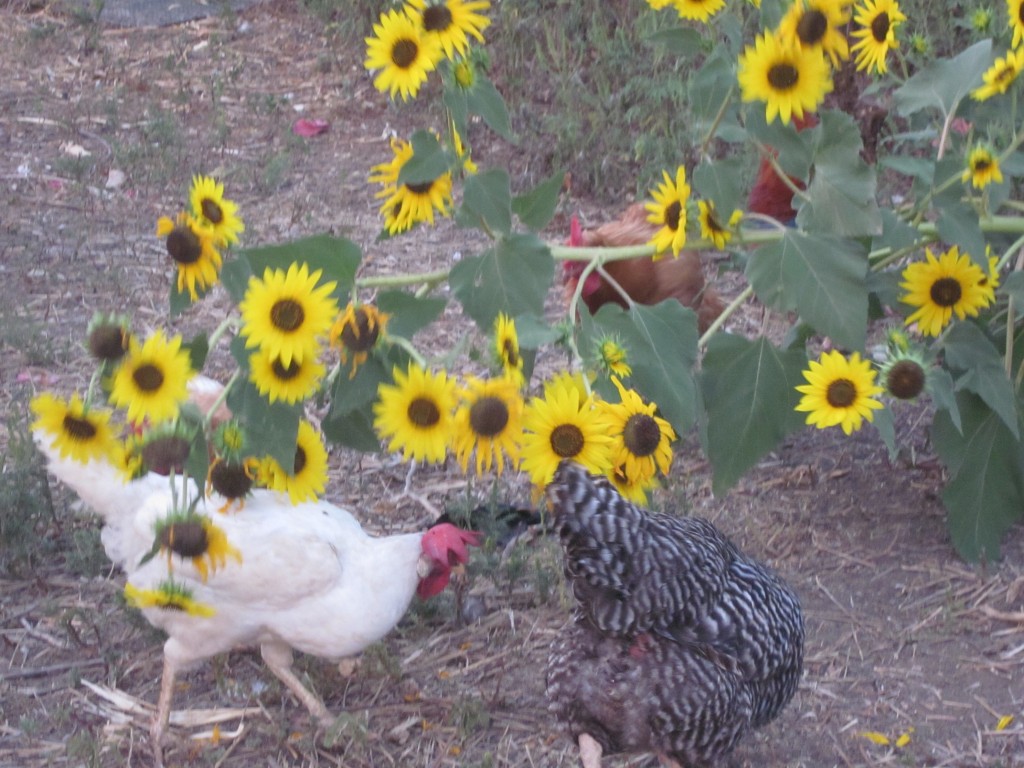 Sunflowers apparently don’t need water to grow. Why are the chickens so interested in them? That I don’t know.

But I do wish it would rain.

P.S.  A few days after I wrote this, it rained!  We got just under an inch, and that scant inch has freshened and greened things up around here quite a bit.  The cracks are still there in the earth, but their edges are softer.  The grass and the gardens look a little less panic-stricken.  I’m thankful!