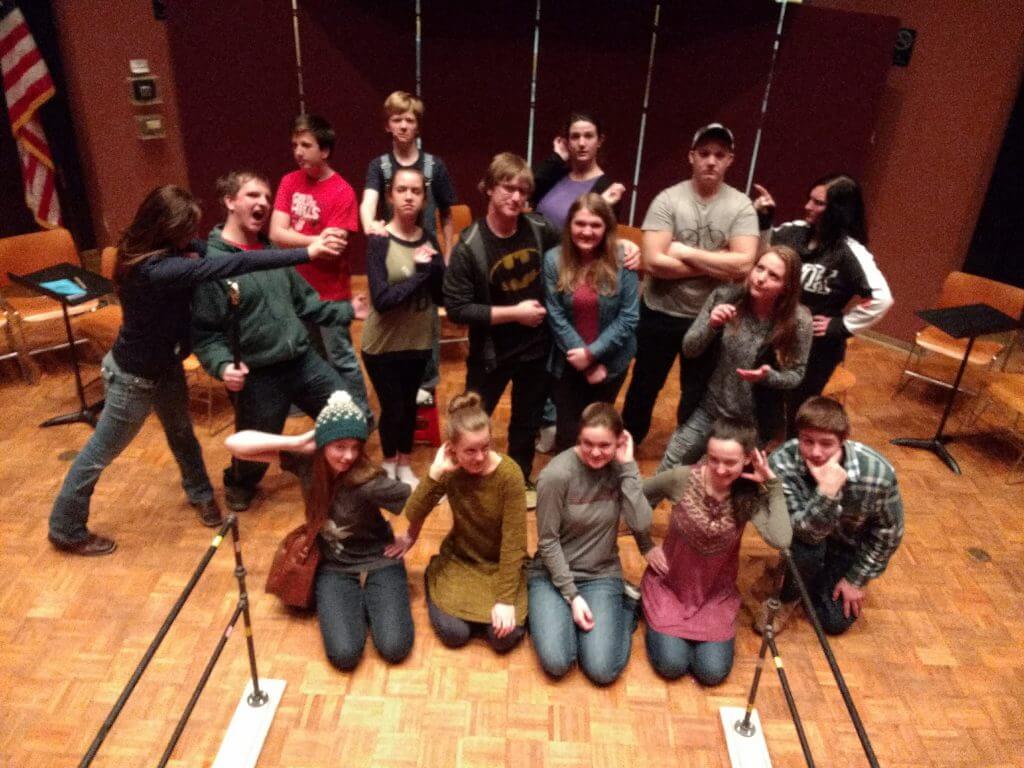 This little tale may give you some insights on why we keep a goose with our chickens. Or it may make you very relieved that you don’t live here in the wild prairie lands of Nebraska, where the summers are harsh, the winters are harsher, and the wind nearly always is blowing. Who knows? Just read on, especially if you’re a little confused already.

It was very, very cold when we got home from drama rehearsal last Friday night. It was in the neighborhood of -5, and the weatherman had warned us soberly that it would probably reach -10 or even -15 during the night, and with the wind blowing the way it was, that could result in nasty wind chills (and that is when I snapped off the radio). The air was frosty, so thin and cold that you could feel ice forming in your nostrils when you breathed in. That’s dangerous cold, in my book.

I climbed out of the car into the frosty night, gathering up all the music and notebooks that I had toted to rehearsal. I was surprised, in the stillness of the night, to hear my two roosters crowing, across the draw (a bit of a walk on such a cold dark night) in the chicken coop.

Strange time for roosters to be crowing: ten o’clock at night.

On a nice night, I would have automatically walked out to the coop to check what was going on. I would have enjoyed a few minutes of solitude (but for my goofy dogs that accompany me everywhere, no matter the windchill) and I would have looked up on the way, and picked out the constellations that I could see, if the stars were out, that is. Orion is always there waving at me this time of year, with Betelgeuse and Rigel. Taurus is not far from the hunter, with the dainty Pleiades cluster. Ursa Major and Ursa Minor . . .

But it was too bitter cold for a walk tonight, and I was tired from a long rehearsal. I badly wanted to go inside, drop all my drama stuff, make myself a cup of tea, get into flannel jammies and collapse into bed.

But I sighed and paused, getting my footing on the ice, my arms full, and looked across at the coop. I had left a heat lamp on in the coop. It looked warm and cozy in the window. One rooster crowed. The second one joined in.

Roosters crow in the morning, though, not at night. Something was wrong. I took a couple steps down the icy driveway. I had shut the chickens into the coop before we left for the evening, just so I wouldn’t have to make this trek when we got back home.

Mack appeared at my elbow. He was looking across at the coop and listening, too. The relationship I have with this last-born manchild is a unique one. One moment he is my fierce protector and advocate, and later on he’ll argue with me to the death! about some quibble or other. “Strange,” he murmured. Then “Mom, there’s nothing wrong out there. Let’s go in.”

I had had enough losses in the hen house in the last few years, losses from predators who somehow found a way into the coop, that I wasn’t comfortable ignoring anything unusual.

“But what if there’s something in there–?” I asked.

“Mom,” he said, going into the more and more frequently seen “smarter-than-Mom” mode, “if there was something in there going after the chickens, they’d be squawking and flying around, right?”

We both listened. Nothing, save the two roosters crowing. All was still. “Okay,” I conceded. “You’re right. It’s probably nothing.”

We both went in and went to bed, but I still felt just a twinge of concern. A little guilt for not going out to check on them.

Which is why, when I headed out in the morning, only to find the coop incredibly quiet, I felt a pang of regret about not hieing myself out to check on things the night before. With each icy, crunchy step, my dread grew. There were no roosters crowing now, when they should have been.

I scattered the chooks’ breakfast out in the yard, refilled some water buckets, and then lifted the small back door. Still listening for signs of life. On a typical day, Lucy, our old goose, would have been out immediately, in a noisy flutter of her enormous wings, hoisting her bulk clumsily down the ramp and honking all the way, as if to announce the existence of morning, and breakfast, and morning chore time, or something. “Calisthentics! Everybodyeverybodyeverybodycoooommme!”

But this morning, no Lucy. One lone hen–the one old Americauna with the deformed beak–showed up at the door and gazed quietly out at me. That was it.

I walked around the coop with a heavy heart, expecting the worst. Doggone it, I shouldn’t have let Mack talk me out of checking on the late-crowing roos, I remonstrated myself. Fie on him for being so persuasive. Fie on me, for listening to my tiredness instead of checking when I should have checked. Moreover, what could have taken poor Lucy out? She is (or was?) a very large goose. How many of my flock were left?

I braced my heart for the worst, as I moved the cement block and the two large stones that keep the predators from getting into the front door.

I inched the door open, and slipped in. There was Lucy. Intact, quiet, watchful, still-alive Lucy. She had pushed open the door between the coop proper and the nursery, where I had installed the six Icie teenager chicks just the day before. When I stepped in, they rushed back to her. For protection. 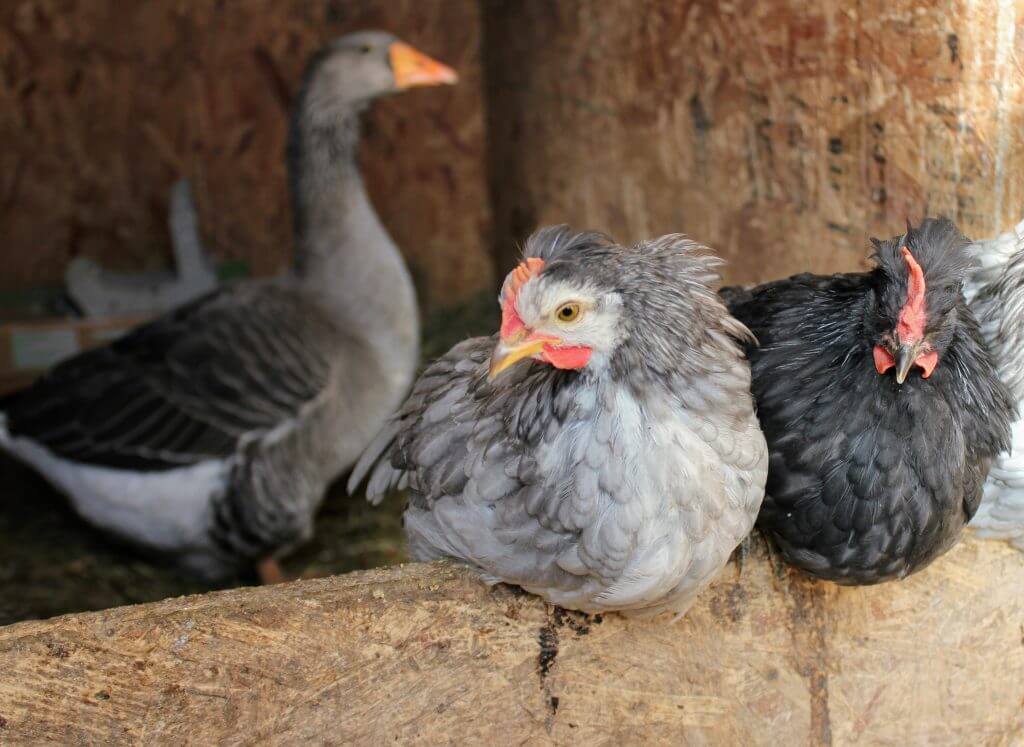 My heart flooded with relief and gratitude. I started breathing again. Lucy had sensed that the chicks were Alone in the World, Without a Mother to Guide Them (to put it in melodrama parlance) and that they could use a watchful Auntie for the time being.

So that was it. The coop would be a quiet place for a few weeks, without Lucy’s honking.

She has actually done this many times, so it shouldn’t have surprised me. She steps in and nurtures where nurturing is needed. When our old Australian Shepherd dog, Bea, became hard of hearing and nearly blind in her old age, and we had to keep her tied up so she wouldn’t come to harm, Lucy would head over from the chicken yard and spend the day sitting with Bea.

She used to sit with our pigs when they were small. A few of her proteges (chickens that she had helped raise) would accompany her. It was a funny sight–two piglets, a goose and half a dozen chickens just hanging out and enjoying the day together. 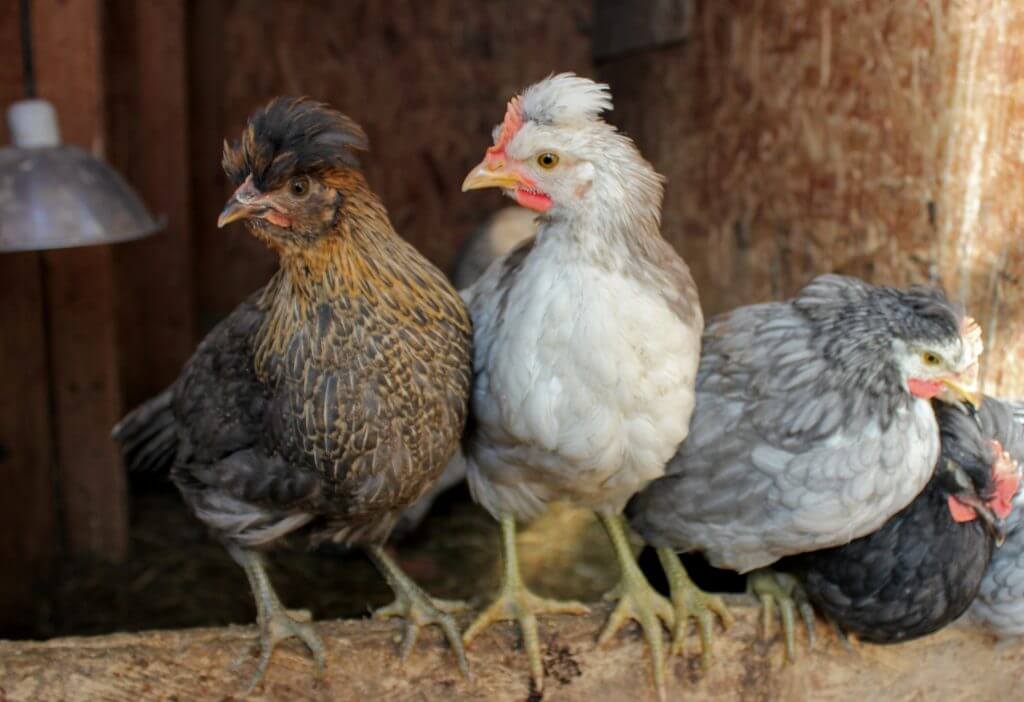 We aren’t the only creatures around, apparently, who crave community. Conversation (of sorts). Company. Warmth. Especially during the long, cold days of winter, we need to know that we are not alone in the world. That somebody has our back.

Every time a mama hen shows up with a clutch of newly-hatched chicks, Lucy will hover nearby, within a few days becoming part of the family group. She lets the mama hens know that she has their back. I wouldn’t be surprised if she has foiled the chick-snatching plans of many a kitty cat or hawk, just from her large and noisy presence.

Introducing chicks to an established flock is tricky, at best. I do have a separate area for young ones, the nursery, with a dividing door between, but my silly Icelandic chickens still fly over the closed door to gain entrance to their preferred roosting areas.

A big chicken suddenly appearing can cause younger chicks to go into a panic, sometimes piling on top of each other and smothering the ones on the bottom. A rooster showing up and hanging out with the young ones can terrify the youngsters to the point where they won’t eat or drink!

Lucy’s presence changes all this. The chicks know they have a protector, and they are relaxed. It matters not that she is an old goose, and they are young chicks. She is warm and big and protective. That’s all that matters. In the long run. 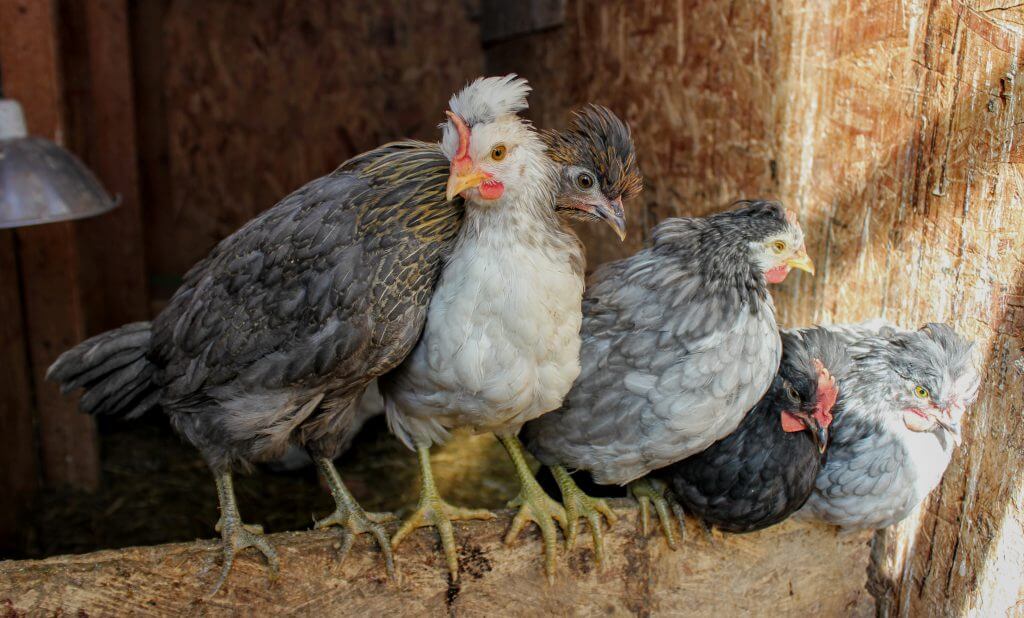 So . . . if you’ve ever thought about getting a goose or two to add to your flock, here is at least one good reason to do so! Having a goosemaid on the premises can certainly be a good thing, and can eliminate a bit of drama when introducing new chicks to the flock.

Have a good one, gentle reader.

5 thoughts on “Goosemaid: a bit of henhouse drama”