Blueberries are divine, but blueberry bushes are finicky about the soil they will thrive in. I’ll show you how to be successful in growing blueberry bushes that produce oodles of blueberries, even if you don’t have the right kind of soil to please them. (So there!) 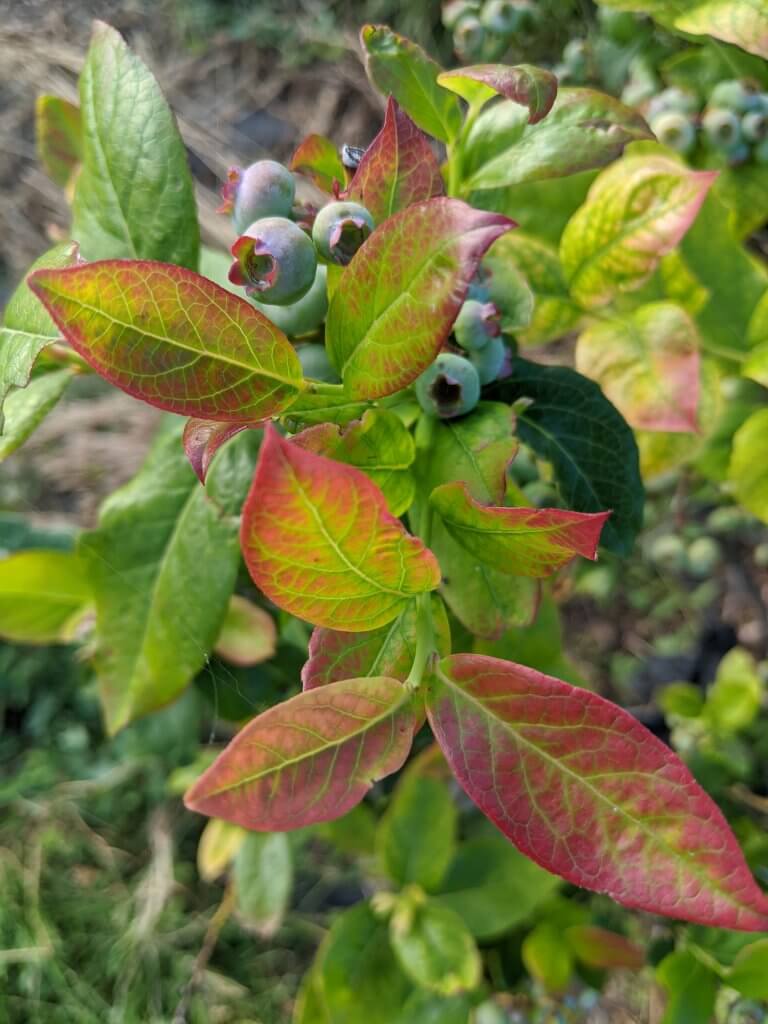 Years ago I dreamed of growing my own blueberries. It is common knowledge that blueberries aren’t easy to grow here in our part of the Midwest, since our soil tends to be alkaline, and blueberry bushes are on the fussy side. They only thrive in high acid soil. They grow wonderfully, I hear, in Michigan, and they grow wild in Maine . . . and I’m sure there are other parts of the world where growing them is easy as falling off the proverbial log.

But it’s not easy to grow blueberries when they don’t like your soil.

Here in Nebraska, gooseberry bushes grow wild; raspberry brambles grow like weeds; blackberry brambles are no trick to grow either, but I don’t know a single person here in our area who has succeeded at growing blueberry bushes.

Not. One. Person. Many have tried, however.

Well, not until (ahem) now. Our blueberry bushes are thriving. Not that this trick has been an easy one to figure out, oh no.

When we were in New Zealand a couple of years ago (she drops, ever-so-casually), we picked blueberries at a farm whereby the bushes were nearly as tall as me, and the blueberries fell off the bushes by the handful when we touched them. It was magic. Blueberry magic.

Of course New Zealand is a magical and wondrous gardener’s dream land, so that’s not surprising. Heaven will be full of berries, I’m sure of it, of all colors and textures. There will be large white pitchers of cream, and you’ll be able to slosh the cream on your bowl of berries any time, day or night, with scant regard to calorie or fat content. Sigh. Or the wrong kind of soil inwhich to grow them.

“This is what I want,” I said to my husband through blue-stained lips and teeth, once I could catch my breath. “Let’s move to New Zealand, or else please help me grow a blueberry patch like this one.” 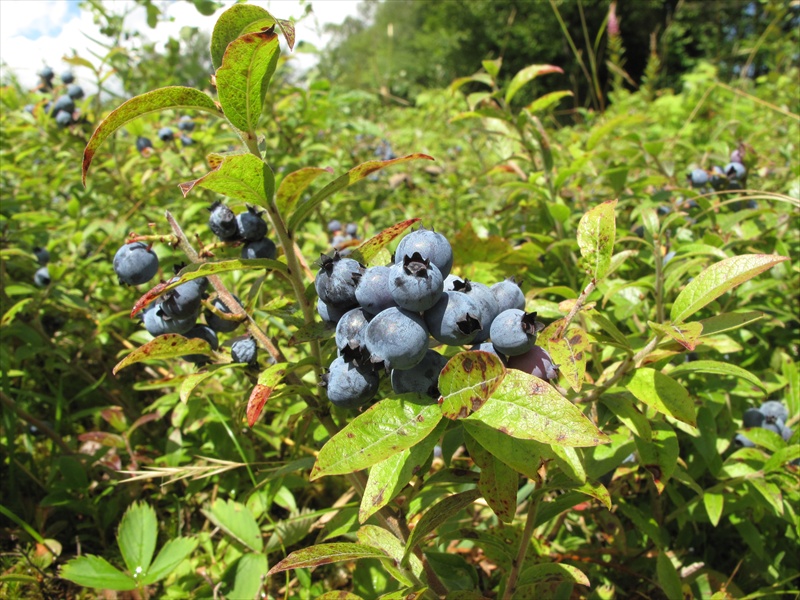 Oh, these delightful morsels of goodness are not easy to grow here in Nebraska!

“We can’t move to New Zealand,” my husband said.

Well, he was right about that. We couldn’t then, and we certainly can’t now, because we now have twelve (twelve, gentle reader, as of this week!) adorable grandchildren here in the states to love on. Not to mention a job. And a bajillion critters to take care of. And that’s no exaggeration.

“So that means you’ll help me plant a blueberry patch?” I asked, pushing my advantage.

My good husband knows that my list of wants is a very long one. He turned to look at me. The love light was not in his eyes, Gentle Reader. “I’ll dig a few holes for you,” he said, reaching down to rub an imaginary ache in his lower back. (I think the ache was an imaginary one, at least.)

The farm where we were picking had several hundred blueberry bushes, and the six of us picked and picked until our buckets were full, and we ate quite a few of those warm berries, too, and the entire time I was just imagining being able to do this on our little farm in a few years. I was in a dizzy fog of longing and blueberry-infused delight.

You know that place, don’t you?

Back in the time machine, to a little town in Nebraska.

I was a little girl, and my dad did me the enormous favor of planting a couple of blueberry bushes next to our house. My second story bedroom overlooked that area of the yard, and my window was the perfect vantage point at which to assess the ripeness of said berries.

When I saw that the berries were starting to turn blue, I’d slip down ever so quietly, and . . . . well, I won’t tell you what I did. It was, after all, a selfish thing to do, but blueberry-hungry little girls can be selfish, can they not?

The songbirds got blamed, in any case, and songbirds are forgiven of anything.

My dad always puzzled aloud about how the birds knew just the moment when the berries were ripe enough to pick. Did he suspect that it wasn’t the birds, but . . . little me . . . who was harvesting the few berries that those bushes produced?

Probably. I don’t know. Maybe not. Possibly. I never said a word about it, obviously.  But I also never forgot the taste of those few berries I ate every summer. 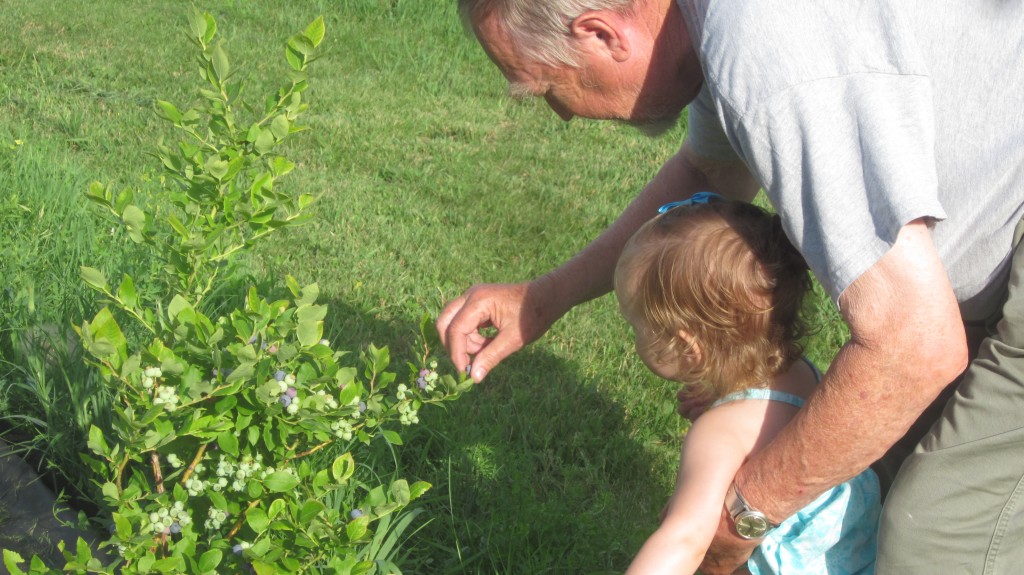 Here’s my dad picking blueberries at our place with his great-granddaughter (my granddaughter!) Anya.

This just possibly might factor into why I’ve worked so hard to grow my own. Also, perhaps, because so many people have told me that it couldn’t be done. I don’t know why they sets me off so much, but it does. If somebody tells me that I can’t do something, I feel my eyes–automatically! unconsciously!– narrowing, my shoulders squaring, and my fists clenching with resolve. And then I go work my hardest to prove that person wrong. Or at least, I try my best to do so.

So I did a little studying, a bit of research, and a modicum of experimentation, not to mention a whole lot  of praying (doesn’t hurt!) and I planted my blueberry plants accordingly. My good (aforementioned) husband and son Timothy helped me dig the holes, and daughter Amalia has been a willing helper in watering and fertilizing them.

That was three years ago. Guess what, Gentle Readers?

We had a bumper crop of blueberries this year. Take a gander. 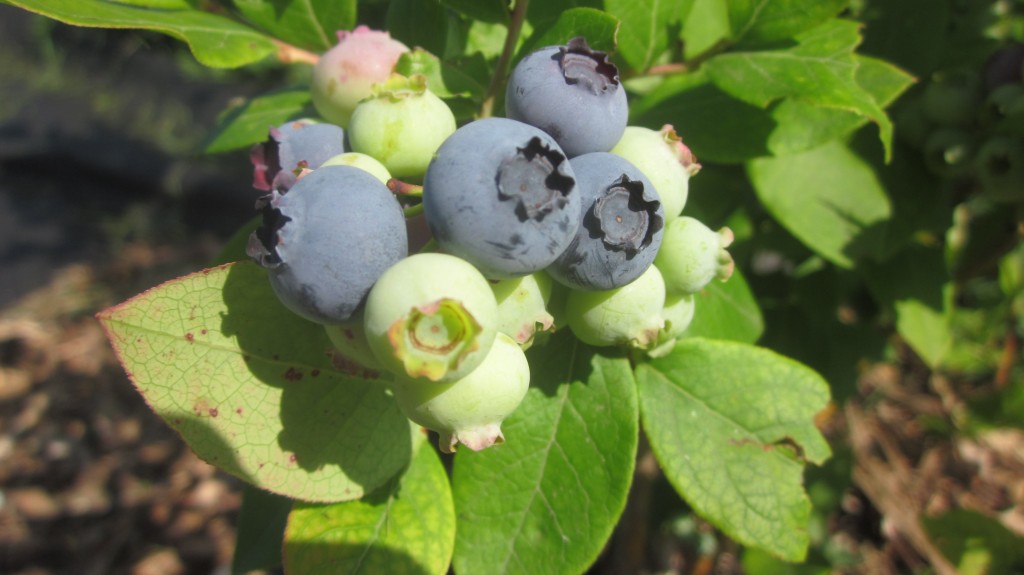 Yes! We grew these–amazing, no?

So I’ve put together my (humble, simple, yet curiously effective) recommendations on how to grow blueberry bushes, even if they don’t like your soil.

The first thing you must know is that blueberry bushes prefer acid soil, and our soil here in Nebraska is alkaline. If blueberry bushes don’t grow wild in your neck of the woods, yours may be, too. So the trick is to change your soil, and that takes a bit of effort. Initially I found this information from a blueberry farm in Kansas that I bought my first shipment of bushes from. With the purchase of a few bushes, they sent me growing instructions, which (of course) I misplaced. 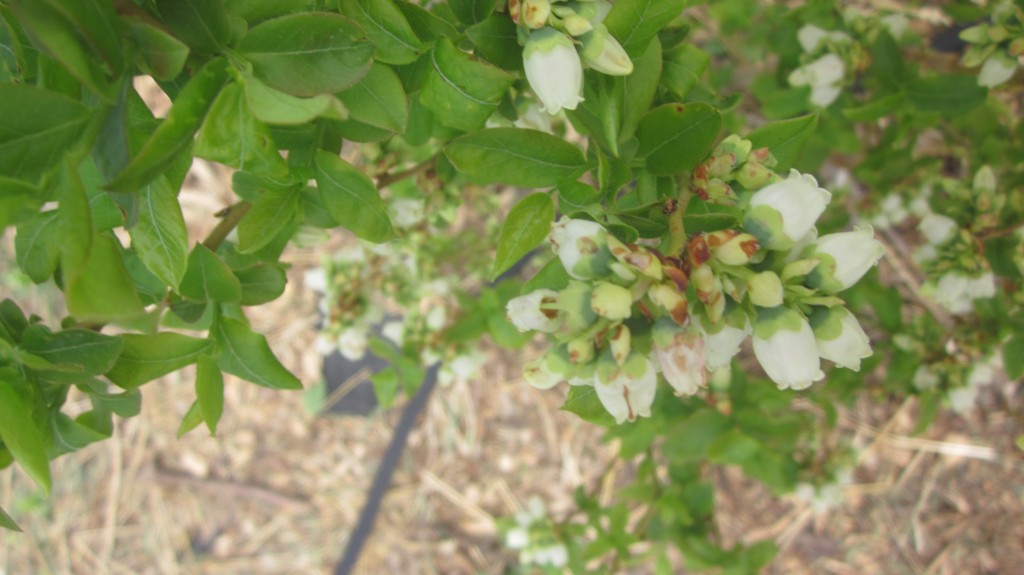 This blueberry bush is loaded with blossoms. In no time at all they will be blueberries, ready to pick!

Good thing I remember those instructions very clearly. I’ve put together a compilation of everything I’ve learned about growing blueberries successfully in Nebraska, or any area where the soil is alkaline, rather than acid.

First, you need to buy bales of peat moss (we figured that it took one bale of peat moss to plant three bushes, roughly) and some fertilizer for acid-loving plants. You can buy both those things from your local farm store. 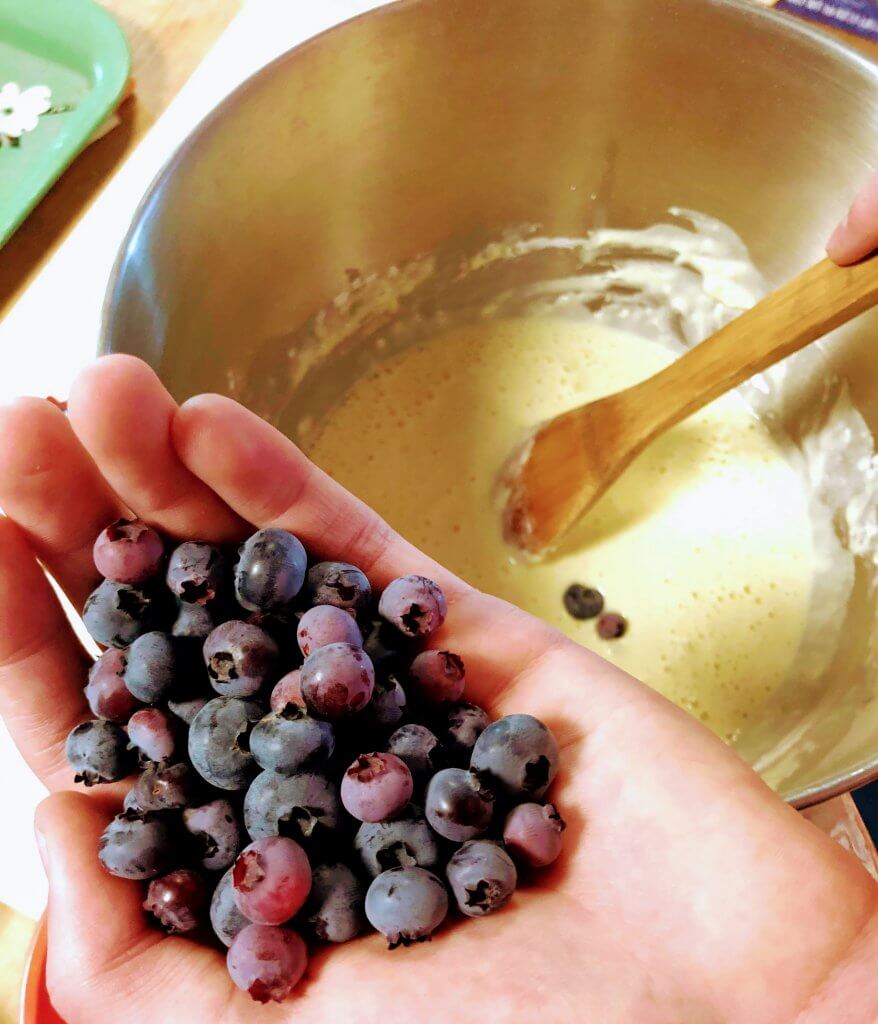 Amalia loves to make something delicious with blueberries as a main ingredient. 🙂

Here’s how to plant your blueberry bushes: 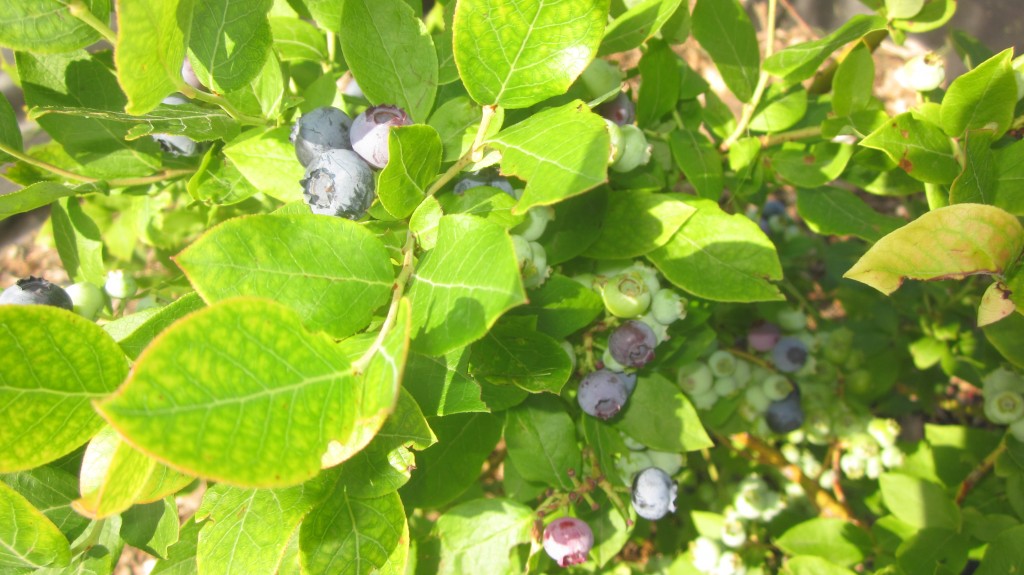 This bush has a nice crop of berries on it.

That’s the hard part.  Now you have a few orderly rows, or if you’re just putting in a few bushes, you have a few lovely bushes planted.  Now comes the maintenance phase.  If you neglect this basic maintenance, your bushes won’t fare so well, and you won’t be eating fistfuls of blueberries in a few years, so don’t neglect it!

Here’s how you maintain your blueberry bushes: 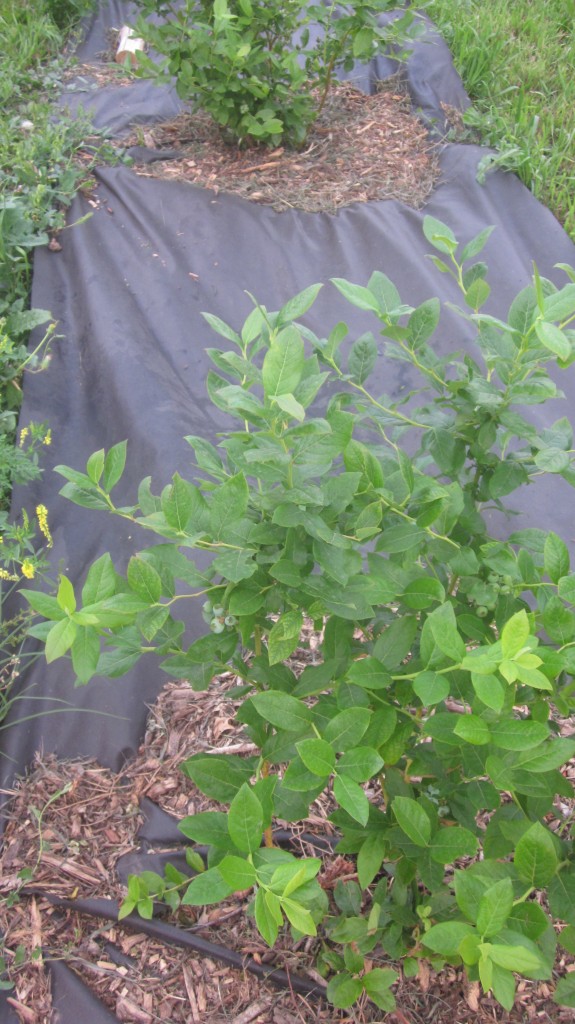 So there you go!

Pin it for Later! 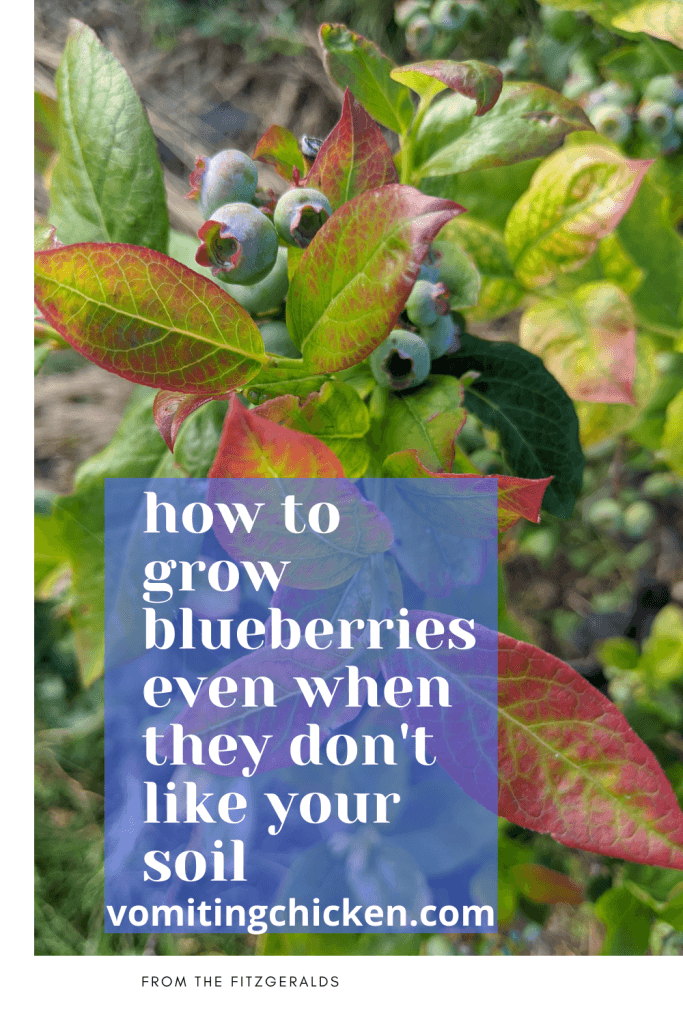 You’ve learned how to grow blueberry bushes, even though you don’t have the right soil for it. Good luck, and happy growing!