This is Part 2 of a two-part story, so if you missed the first installment, here it is.

A quick recap: My brother Mark had entered his custom-made slot car in the big tournament at the Youth Center in Nelson, where we grew up.  I was longing to do the same, but I lacked the gumption to do it.

The day of the tournament dawned, and Mark was confident that he would be the big winner of the day.  Nobody else in town, after all, had an awesome dad like ours who could make amazing custom cars like ours.  Everybody else had the cheap, flimsy little cars purchased at the Youth Center. So obviously Mark would win. Right?  Of course, right.

I decided to tag along with Mark to the tournament, and at the last second, I grabbed my nifty little Volkswagen VW Beetle slot-car.  I was nervous and scared for Mark, and I couldn’t even fathom how frightened I would have been if I was signed up for the race, too.

Of course that was beyond my wildest imagination. I just wasn’t brave enough to pit my darling little VW Beetle up against all the big boys in town who would be racing that day. This wasn’t an introverted little girl sport. This was a big boy extroverted sport.  Besides, the truth was: I was lacking in gumption.

But then events spiraled out of my control, as, you know, they often do.  I followed Mark into the Youth Center and I was immediately overwhelmed by the noise and bustle of the crowded place.  The owner, Mr. Worley, clip board tucked under one arm, caught sight of us, and he leaned down to study our little slot-cars, turning mine this way and that.

“That’s a pretty little bug,” he said, studying the glossy finish with admiration.  “Where’d you get it?”

I couldn’t speak, what with all the noise and the bustle of the crowd, and the fact that my jaws were unaccountably frozen in place, but Mark came to my rescue.  “Our dad made it,” he said “and he made mine, too.”  He held up his little Gremlin.

Mr. Worley narrowed his eyes and studied our cars.  “Homemade slot-cars, eh?” he said with a smirk.  “It’ll be real interesting to see how they do today . . . ” he whipped his clipboard up and studied the lists of names.  “Mark, you’re in the first heat . . . and Amy . . . ” He ran his finger down the sheets. 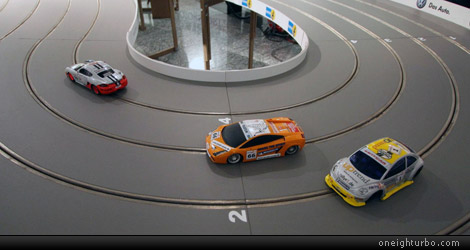 “Of course she is,” Mark said, as he gave me a fortifying pat on my back.

“Good! Good.  I’ll just tack her onto the last heat. There is just one spot open,” he said. “Double-elimination, kids, that means you–and your homemade cars–have two chances.”

I looked up at Mark in horror, after Mr. Worley hurried away to announce the first heat.  “Why did you do that??” I asked.  “I didn’t come to race! I just came to cheer you on!”

Suddenly I felt sick.  The place was crowded with competitors and spectators alike, boisterous, excited, and noisy.  I looked around at the other racers, and they all appeared to be boys Mark’s age and above.  All the little girls my age were in the balcony, eating cotton candy and popcorn and drinking bottles of pop, excited about cheering their friends and big brothers on.  I was sunk.  I was dreading the humiliation that I was sure to face that day.

Then Mr. Worley announced the first heat, and Mark moved quickly across the room to join the other racers.  I clutched my fat, round, shiny car, feeling foolish and vulnerable. My brother turned and gave me a wink and a thumbs-up, then held up one finger, and pointed to himself.

“I’m number one,” he mouthed, and then he held up two fingers, and pointed to me.  “Second place,” he mouthed, with a big grin.  Hmph.  I narrowed me eyes.

That’s what he thought. 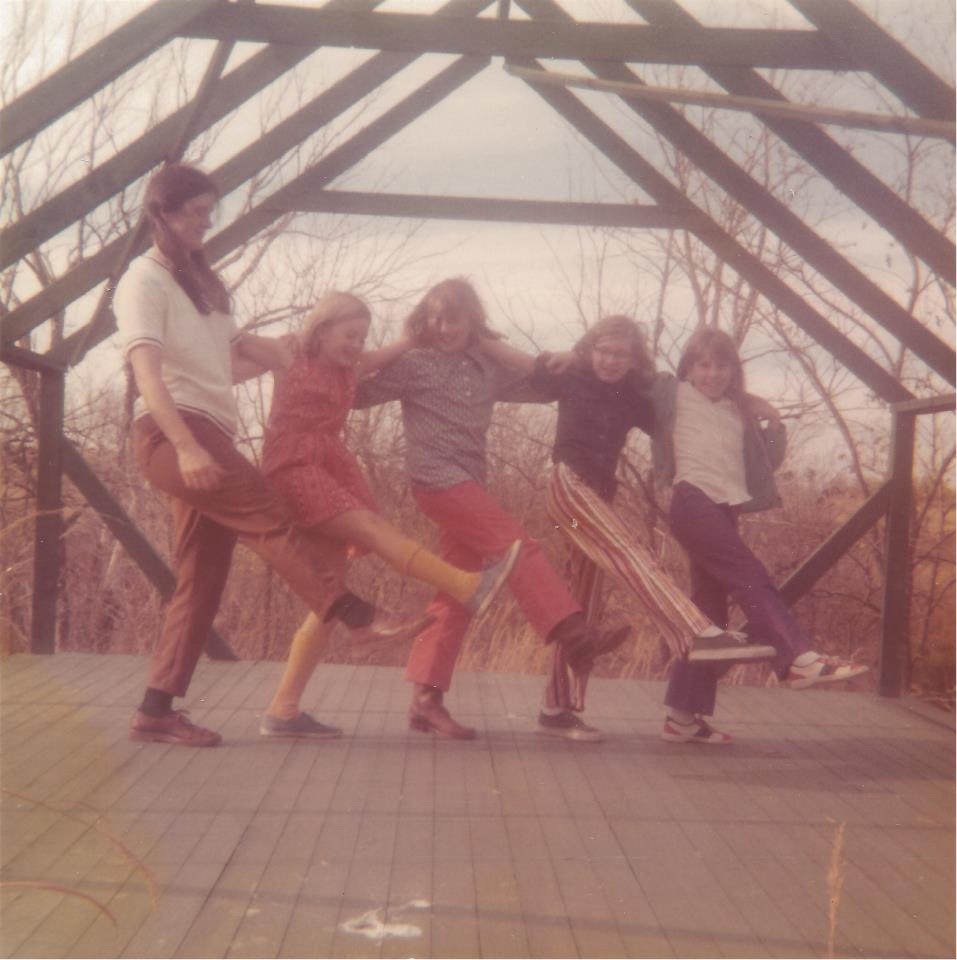 Here my Mom, Elna Young, teaches me and my friends a fancy dance move.  I’m the second one from the left.  Image from Crystal Meyer.

I had beat Mark enough times at home to have a pretty good feeling for how fast my little car could go, and now that I was in the tournament, I felt a determination to do my best, no matter that the competition intimidated me. It was a feeble effort, I knew, to crowd out the fear that had me rooted to the floor.

You know how tournaments work.  This was a double-elimination tournament, so we got two chances each to win.  If we lost twice, we were out.  Mark—and his super-speedy AMC Gremlin—was out of the tournament fairly early, to my surprise, and to his disappointment. I somehow won one race, so I was still in the running for the big shiny trophy sitting on Mr. Worley’s counter top.

The Youth Center sold hot dogs and pop at lunch time, and there was an hour break so everybody could re-charge.  We knew that Mom would have lunch ready for us at home, and home was only a block and a half away, so we trudged home for lunch.  Mark had swallowed his disappointment over being out of the tournament so early, and was full of optimism and advice for me.

After lunch, we walked back to the tournament, and Mark carried my bug, polishing it with a rag that he had grabbed at home, trying to bolster my confidence.  “If I can’t win, Amy, you’ve got to win! You’ve GOT to!  You’re tough! You’re a competitor! You’re going to cream all those other cheap little stupid cars!”

I don’t know exactly how it happened, but I made it through the races of the afternoon, only losing one race. This was beyond my wildest dreams.  My fat, round, shiny little car and I were going to be competing in the championship race.

I was pitted up against one of Mark’s friends, for grand champion of the entire tournament.  It was incredible.  Unthinkable.  My little burgundy VW bug had won so many races!  Apparently the heft of my little car helped so much to keep it on the curves, that it had an advantage over the lightweight cars.  I’m sure there’s a physics principle that I could bring up here, if I’d taken my dad’s advice and taken physics in high school.  But I didn’t.  Oh well. You don’t want a physics lessons here anyway, do you?

You just want to know what happened next. Okay, I’ll skip the physics (that I don’t know anyway) and you’re welcome.

Mark’s friend’s car was blue and white, a flattened little convertible—a convertible!—and it was fast.  He hadn’t lost a race.  Yet.  We lined up our cars on the starting line, and Mr. Worley raised his arm as our signal to get ready. My hands were shaking.  We watched the control board, waiting for the green lights to appear.  The audience held its breath, collectively.

You could have heard a pin drop in that place.  I could hear my heart beating in my skinny little chest.

The green lights flashed!  We were off.  We had to do three laps.  The bigger boy’s car shot ahead, of course, but I gained on him when we hit the curves.  Then he would pull ahead of me on the straightaways.  After one lap, he was ahead of me by one length.  By the second lap, I had caught up with him, and we were nearly even on the track.  As my car approached the first curve, it surged ahead of his.  The race was mine! I knew that if I was actually ahead at this point, I’d win, barring some unforeseen disaster . . .

Just then—an unforeseen disaster!  Something dropped from the balcony, where all the spectators were clustered.  It was a kernel of popcorn, as if in slow-motion, falling slowly down to the track, landing right in front of my car’s slot.  I glanced up to see the little sister of Mark’s friend, hanging over the railing with a popcorn bag in her hand.

The kernel of popcorn lodged in my car’s slot.  My little burgundy bug hit it, de-railed, and flew off the track, crashing against the wall.  I felt sick.  It was the first time my darling car had ever flown off the track.  Feeling sick, I dropped my hand-control and ran to put my little car back in the slot, and quickly cleaned the popcorn off the track.

I moved as quickly as I could, but I knew that the race was over.  I had lost.  I glanced up at the little girl.  She was laughing with her friends, paying no attention to the fact that her carelessly-dropped snack had probably cost me that big, gleaming first place trophy.

I still have the little second-place trophy from that event, tucked carefully away in a trunk full of childhood mementoes.  The first place trophy was so big; you can’t imagine how much I wanted to carry it home.  But Mark pep-talked me to death all the way home, to his credit.  He could have been crowing about his friend beating me, about being right about my car being too heavy and fat to win a race, but he wasn’t.

He was proud of his little sister, and it was a sweet thing at that moment.  Even if I did have the unremarkable green eyes with no eyelashes, and he got the gorgeous brown ones with the lush lashes.

So now you know the story, and you understand why every time I get into my husband’s car, I want to go really really fast.  This will be news to him, too.  Once he knows of this inner desire, I wonder if he’ll let me borrow his car again?

Better just keep this story to yourself.