So I have a confession to make . . . something that will startle and (hopefully) amuse you.  Here it is:  every time I get behind the wheel of my husband’s little commute car, admittedly the sportiest car we’ve ever owned (though far, far from a Corvette or a Monte Carlo, or anything of that ilk) I dearly want to scoot down in the seat, push the gas pedal to the floor, and go fast.  I want to send the gravel flying.  I want to astonish myself with how fast I can actually go!

I want to be a race car driver.

Does everybody feel this way about being in a little sporty car? Willing to throw common sense and caution to the wind, and just push the pedal down?

I want to not be this cautious middle-aged woman who always goes the speed limit, who gets sleepy at nine o’clock and avoids mirrors.

I want to be a ten-year-old girl again, skinny and sun-tanned, with honey-colored hair down to my waist.  With a killer-fast slot car in her hand.

The vehicle I drive is the family car–a Suburban, usually stuffed full of kids and groceries and library books and chicken feed.  There are petrified French fries under the seats, and it always has this strange smell that is hard to place but is suspiciously like a combination of old food and sweaty boy socks. 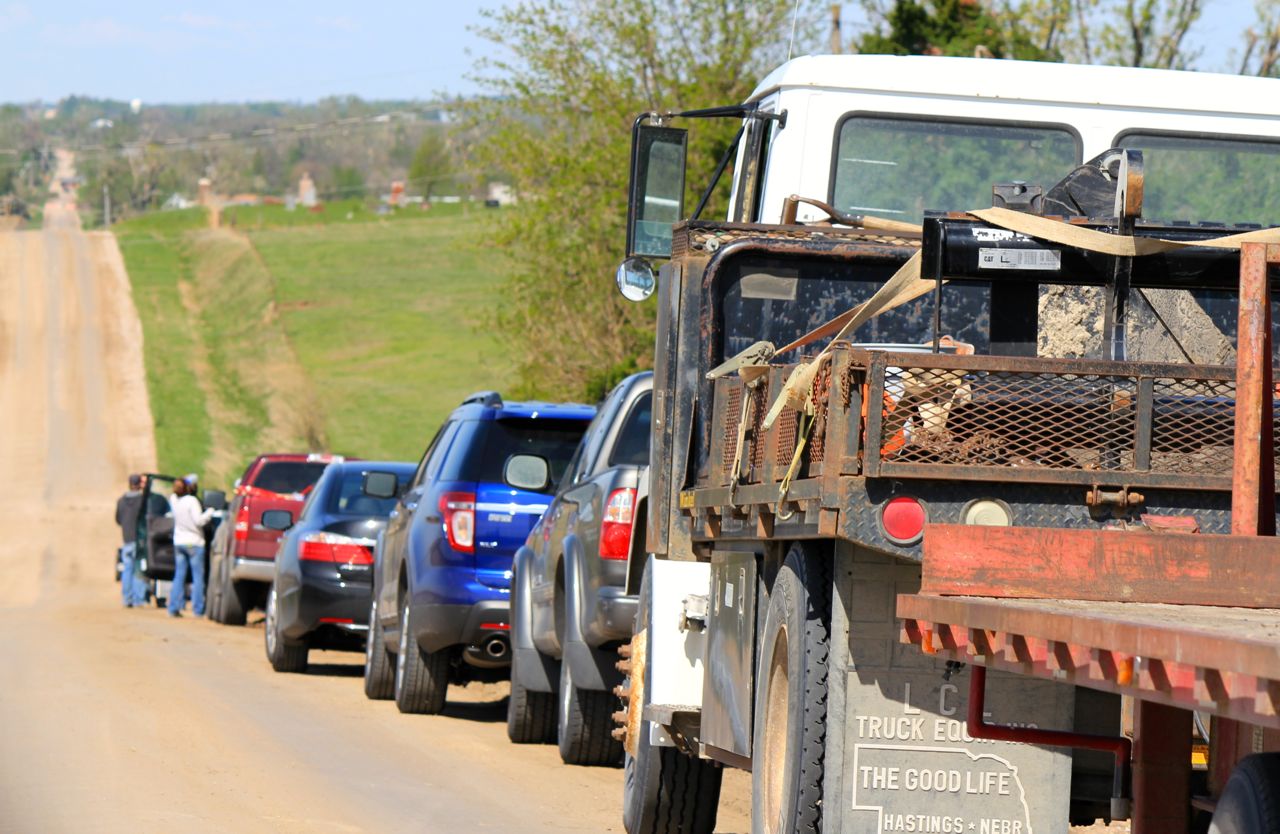 In our little town of Nelson, when I was a girl, one of the empty stores downtown was made into the town’s “Youth Center” for a time.  We weren’t allowed to go there by ourselves, being little kids and naïve as all get out.  It was kind of a teen hangout, and was also next door to the town bar, both facts making it a potential trouble spot.

But for a time, the Youth Center was quite the attraction:  Mr. Worley managed a slot car track there.  The place was open for slot-car racing during the afternoons after school.  It was a big deal in our quiet little town.  There were even little slot cars for sale there, and I–like most of my friends–begged my parents to help me buy a slot car so I could race.

My dad is creative and good with his hands, and not a little competitive, too.  He wouldn’t hear of my brother Mark and me buying the lightweight cheap cars from Mr. Worley.  He knew that with his help (read: if he made them) our handmade slot cars would be far and away superior in every aspect to the flimsy cars for sale down at the Youth Center.

Mark and I weren’t foolish enough to argue with Dad.  Dad was always right.  Still is, as a matter of fact.  So Dad took us to a hobby store where we chose models to make into slot cars.  Mark picked an interesting hatch-back model called a Gremlin.  It was streamlined and speedy-looking.  I fell in love with a VW bug.  Both Mark and Dad tried to discourage me from this choice.

“Amy, it’s round and fat.  Round and fat things do not go fast,” my brother insisted.  I didn’t care if it went fast or not.  I just loved the VW bug, and that’s the one I wanted.  That’s the one we bought. 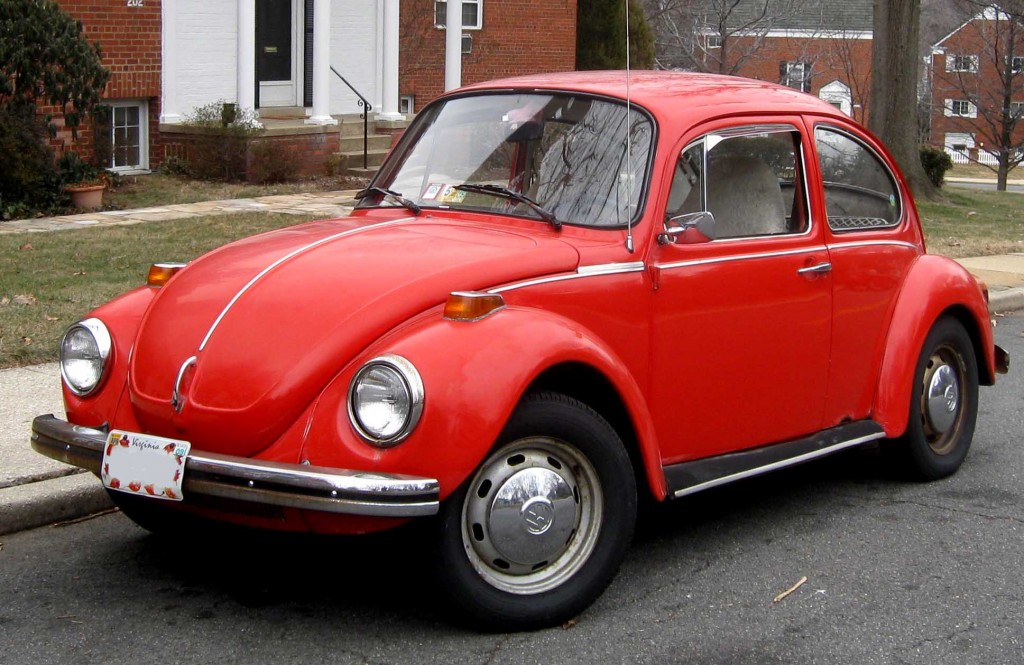 image thanks to Wikipedia

Dad spent hours and hours working on our cars, while we looked on happily, keeping him company in his shop.  Dad designed the chassis of our cars so they were heavier than the cheap store-bought cars.  He used brass tubing, filling mine with molten lead, so it wouldn’t fly off the track if I took the curves too quickly.  (Which I wouldn’t, but he had no way of knowing this.) Then he helped us spray paint our cars, and we finished them with layers of varnish so they were impressively glossy.  We painted my bug a deep burgundy, and Mark chose brown for his little Gremlin.

My car was so beautiful, it took my breath away.

Mark’s was okay.  Yeah, right away I could see that it was faster than mine, but so what?  Mine looked amazing.  Mine was amazing.

Anyway.  My brothers, sisters and I were blessed in that Mom and Dad usually threw themselves into our interests with gusto.  This was the age of doing, before the current age of simply watching came in vogue. I do prefer that age.

Permit me a soapbox moment, and please realize that I try to keep these to myself.  Kind of.  Now and then, at least, I do.  Well, not really.  Never mind.  I was explaining this concept to my daughter Amalia yesterday.  These days, we have an enormous variety of things to watch:  the television, of course, with its infinite variety of channels; videos; DVDs; Netflix-on-demand; movies from the supermarket; YouTube videos; instructional videos; movies at a growing number of movie theatres; and so forth.

When I was a kid, we had a tiny black and white television in our living room with three channels, maybe—depending on the weather and the state of the antenna and reception that day, not to mention the humidity and barometric pressure.  Usually, there was nothing on that we even wanted to watch.  And that was fine with my folks, who believed—always—that doing was nearly always superior to watching.

But, Gentle Reader, I digress.  The point is that I had the most beautiful little slot car ever, thanks to my dad and the fact that he liked doing things with his kids.  Also, that he was (and is) crazy talented making things with his hands. We were lucky kiddos.  (Still are, as a matter of fact.)

Dad even built a slot-car track out of a sheet of plywood, in our basement, setting it up on our ping-pong table. It had multiple tracks for racing, and we spent many hours down in the basement, racing among ourselves.  It was also fun to set up little trees and houses and animals along the road.  That was probably my fun, though, not Mark’s.  Mark’s fun probably was to set up little plastic animals and people in the way of the oncoming cars, and then steer his car to crash through them, sending them flying off the track.

My brother was preparing for a big slot car tournament at the Youth Center.  There were posters advertising the event all over town.  Mark spent a lot of time in the basement, running his car over the track for hours, and goading his younger siblings to time his laps.

As anyone who has ever raced slot cars knows, the most important skill to learn is how to take those curves.  Anybody can go at a break-neck speed on the straightaways.  Everybody does.  That’s the easy part.  But go too fast around the curves, and you’re toast.  Your car will fly off the track, hitting the wall, chipping the paint, and you’ll have to drop your control and run to rescue your car, setting it back up on the track.  And all while you’re trying not to cry, in my case, anyway.  If this happens during a race, you will not win the race.  You will limp away in disgrace.  You will lose. 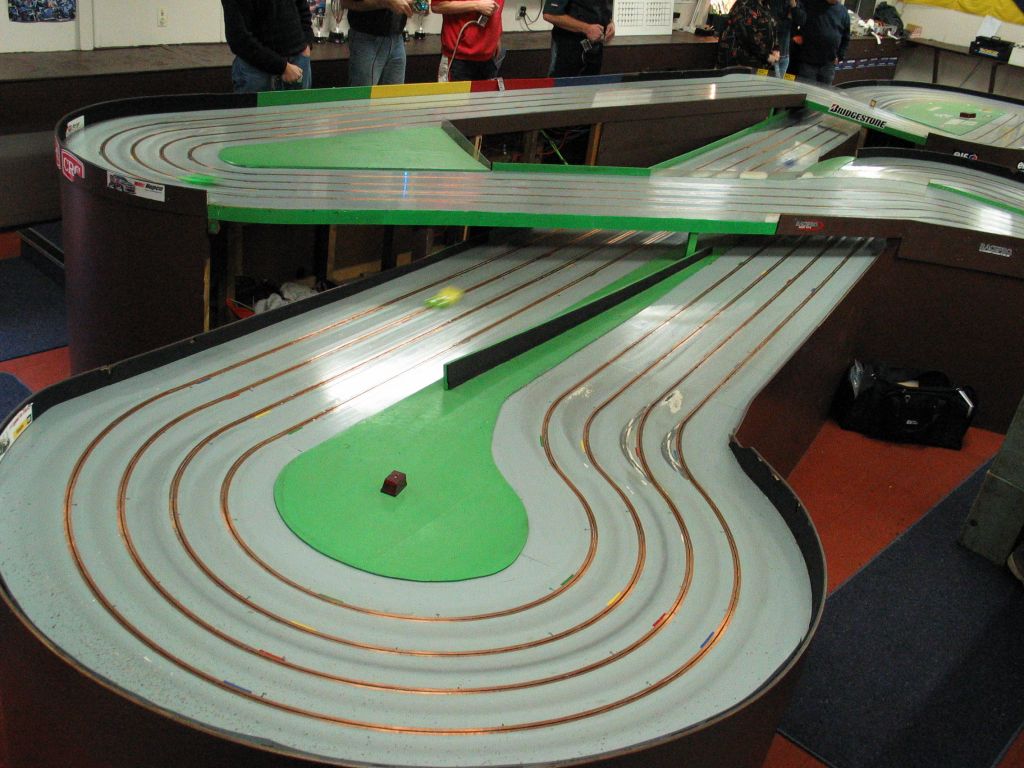 This slot-car track is way, way cooler than ours was.

I watched Mark practicing with his slot car on the track in the basement, and felt a bit disloyal to my dandy little bug to actually find myself wishing that I had thought to make a faster, streamlined car.  Then I, too, could compete with Mark and his friends in the big tournament.  My little VW, cute and glossy as it was, couldn’t compete with those stream-lined, speedy race cars like Mark’s.  I was holding the little car in my hands.  I honestly didn’t want any other type of car, but it would be nice if it was faster.

Other than that it was perfect.

I stepped up to the track next to Mark, and put my car in a slot.  I picked up the controls, and when Mark’s car came around to the starting line, he brought it to a halt and grinned sideways at me.  My brother’s big brown eyes twinkled at me.  I had always been jealous of those great big eyes with the impossibly long and lush lashes.  SO jealous.  Still am.

“Wanna race, little sloooow red car girl?”  he taunted me.  I didn’t like the way he drew out the word “slow.”  “You know you won’t win.  Not against me and Speedy Brown Gremlin.”

I set my jaw, and took a deep breath.  “Say when,” I said, staring hard at the starting line.  I wanted to see how fast my little bug could go.

Both our cars lurched ahead, down the first straightaway.  Mark’s was ahead by a car length or two, until he got to the first curve.  In his eagerness to impress and at the same time, thoroughly cream his little sister, he took it too fast and his Gremlin flew off the track and crashed into the basement wall.

“Remember the story of the tortoise and the hare, Mark!” I managed to say, as I pushed my VW around the curve, and back around the track to the finish line. Mark let out a cry of frustration and ran to re-set his car on the track.  I won the race.

Mark’s pride was wounded, and he wanted to race me again.  And again.  We spent the evening pitting our little cars against each other, subsequently improving both our racing skills, as much as Mark would (of course) deny this.  I was the underdog in so many ways.  I was a skinny little girl.  I had a slow, heavy car. I was the little sister. I had non-remarkable green eyes with invisible eyelashes.  I had nothing to lose.

Here’s my big brother Mark and me, a couple of years ago, after running the Living History Farms 7-mile off-road race.  In this case, I beat him. But he still has the superior eyes. And he dresses better than me, too, obviously.

Poor Mark, intensely competitive, was sweating every race.  I was just having fun.

So you’ve probably guessed what happened next.  I mustered up the gumption (here’s another question: how come nobody uses words like “gumption” any more?) to sign up for the big Saturday tournament.  I was scared to the bone, but you know what they say (or used to):

This tale is getting a little long, so PLEASE tune in tomorrow–same place, same time–for the riveting conclusion!

Do I win?  Do I lose?  Do I talk anybody else into using the “gumption”?  You’ll just have to come back here to see!