Pity the plight of the last-born in a large family.  My youngest, little Mack, is 6 years old and clearly wins some and loses some, due to his position in the family. 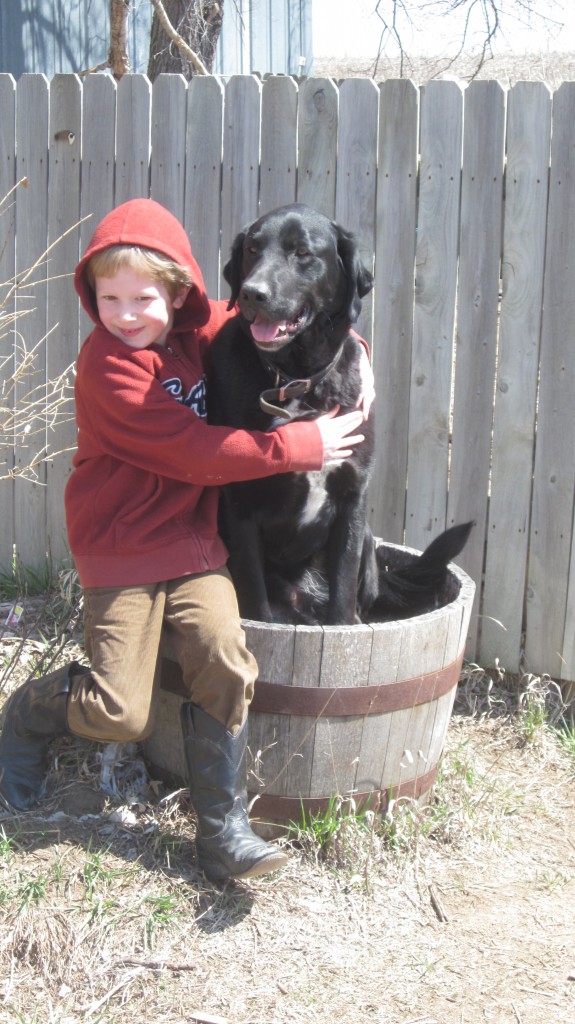 Win:  having a big brother who will, on occasion, drop whatever he’s doing to go outside and play “Spies” for an hour or two with you. And you get to make every rule.

Lose:  having, in essence, two mothers and two fathers (at least) at every meal correcting you on your table manners, tone of voice, and how many veggies you choose to eat (or not eat).

Win:  always having somebody to do something with, no matter what.

Lose:  rarely having mom or dad all to yourself.

This morning we were cleaning up from breakfast and preparing to dive into the books for the morning, and little Mack, still in his jammies (which he has outgrown), carried an old huge paperback book full of activities into the kitchen.  You know the type: lots of word puzzles, art projects, and the occasional simple science project.

He had the book open to a science project, and he plopped it open on the kitchen counter in front of me.  He then asked me if I would help him do this science experiment.  My mouth was already open to say “Later . . . maybe we could do it later . . . ” since I already had My Plan For The Morning firmly in mind. My plan didn’t involve science experiments. Sure, they’re always fun, but they suck so much time away, and there’s always an essential component that we don’t have . . . copper wire or a handful of mung beans, or a cow’s eyeball.  Something.

But a pleading look in my son’s little face stopped me from saying those words.  I didn’t say no, or even maybe. He has been showing signs of something being amiss in his little world lately, throwing angry fits about doing his math, raising his voice at his sister, and so on. He’s not exactly kicking the dog yet, but he’s close to that point.

I sighed inwardly and looked closer at the book. “Gather ice cubes, a flashlight, a metal pan, and a wide-mouthed pickle jar, and some boiling water,” it said. Well. That wasn’t so hard. No cow eyeball to procure, at least. “Okay, let’s do it,” I said, sending a very happy little boy scurrying after a flashlight and a pickle jar. It took me two minutes to assemble the rest. 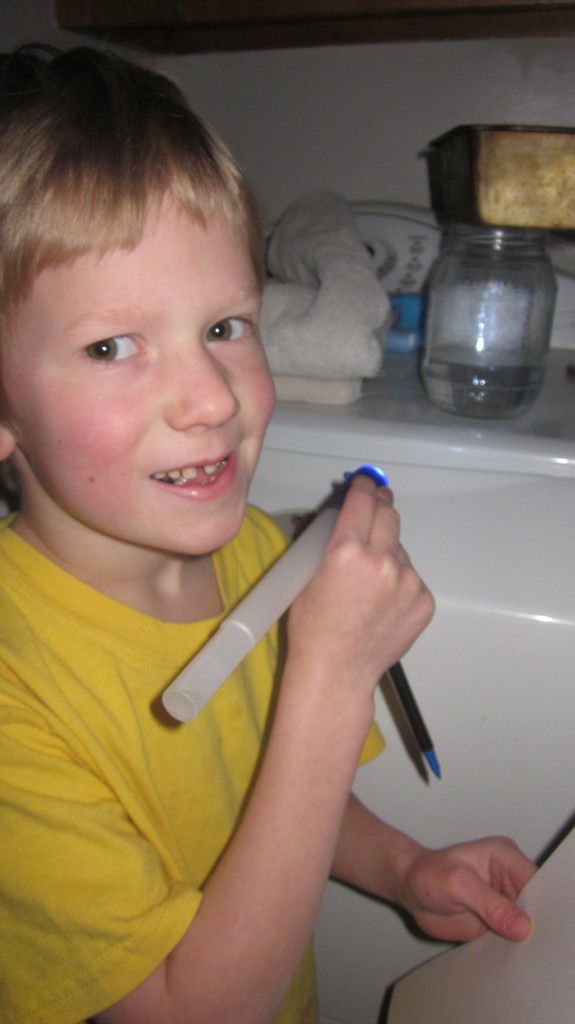 Here’s my happy boy with his flashlight, ready to write down results of our experiment.

The idea was that if you put the boiling water into the pickle jar, and then put the ice cubes into the metal pan and covered the mouth of the jar with the pan, that a little cloud would form inside the jar within a few minutes.  But the only way you could see the cloud was to be in a dark room.

So Mack and I assembled our little pickle jar–ice cube-filled metal pan–miniature cloud-making apparatus, and we headed for the bathroom, which is the only room in our house that is really dark when you turn out the lights, during the daytime, anyway. 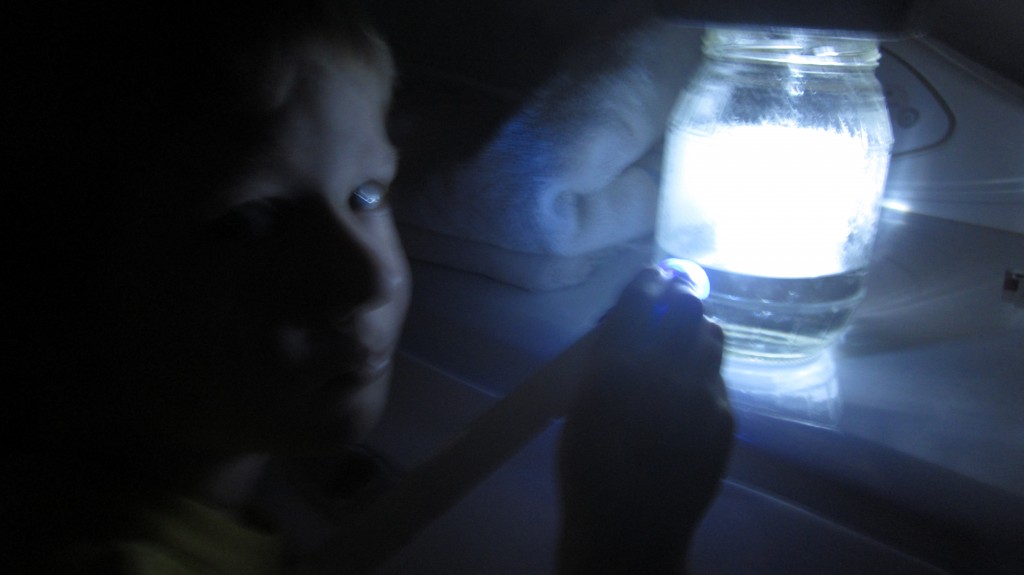 Here Mack is watching for the cloud to form . . . see how dark it is??

Mack had the flashlight. He loves his flashlight to death. Almost as much as he would love a pocketknife, if I’d allow him to have one. I snapped off the light when we had everything assembled, and he burst into delighted giggles.

“Oh, I love being in the dark, don’t you?  At least when I’m with someone–” he said in a husky voice, and he impulsively reached out and hugged me, hard. I’m getting a lump in my throat just thinking about it.

So that was the best part for me, of course. Snif.

But it actually gets better: we really did make a little cloud in the pickle jar. I explained to Mack as we waited for our fantastic little cloud to form, that this is the way clouds form in our atmosphere . . . moisture from the ground rises to meet cooler air above, and then–voila!–a cloud forms.

I took a few pictures and played with the camera for a bit. We waited. We giggled. We hugged again. It was the best part of the day. And then . . . we admired the little baby cloud in the pickle jar, that we (ourselves!) had made. It was cool. 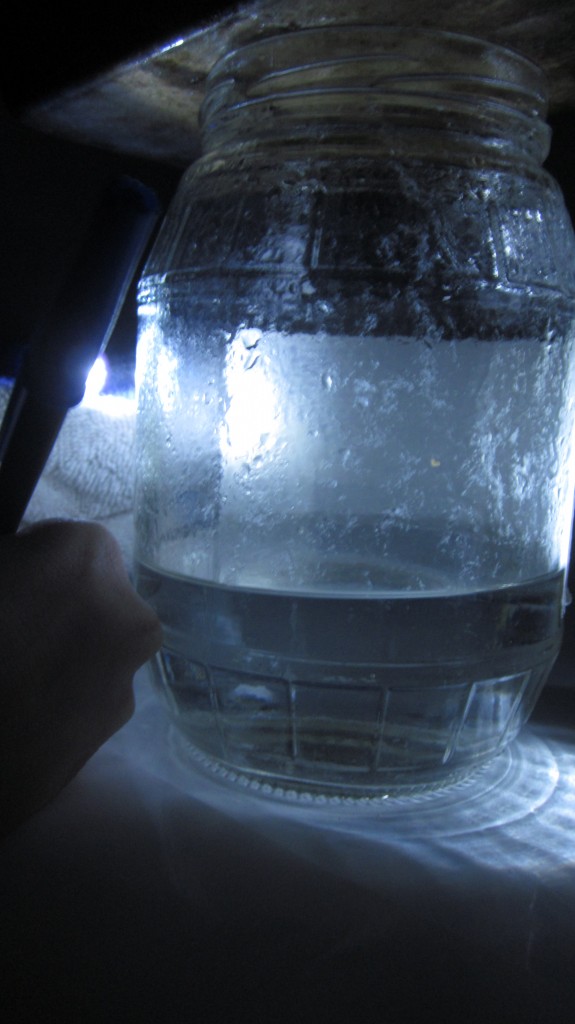 Here it is! Can you see our little cloud? Trust me, it’s there!!

And get this–the entire episode, which strengthened our love for each other, and which gave us lots of giggles and memories (and pictures for this blog) and taught little Mack a bit of science, besides–took an entire fifteen minutes.  Fifteen minutes–that’s it!–for all of that. 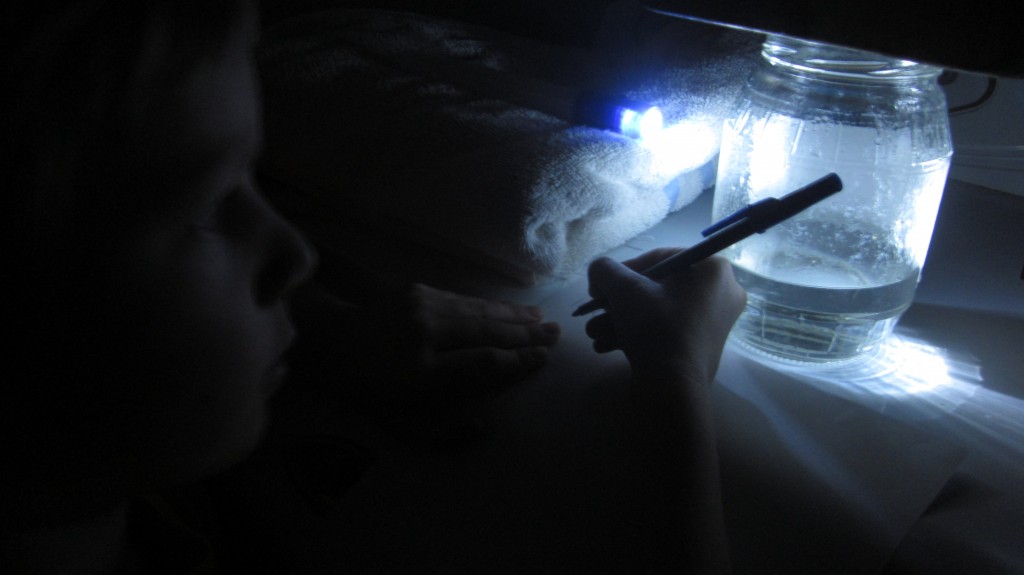 A good scientist always writes down his findings. Preferably while still in the dark.

Tie those strings, mamas and papas.  Tie those strings which will bind you together with your children for life. It doesn’t have to take scads of time, money, or even effort. But don’t forget to take pictures, so you’ll remember your fun times together, because you are going to want to never forget those special moments.

Because I can tell you one thing: your children never will.