A serendipitous discovery: a new friend, with too much raw cream and milk to process herself, offered some to others in the area, in exchange for a share of whatever they made from it. Oh, Gosh. I was there, with dreams of homemade ice cream, homemade kefir, and homemade butter dancing in my head. I am so green (or one might say, “raw” ha!) in this area, compared to many of the homesteading folks I know. I don’t have a milk cow (or even goats!), so making cheese or kefir or yogurt or my own raw butter is just the thing of dreams for me.

So green that I didn’t even know that you make butter out of cream, not milk. I know. Silly moi. So I was surprised when I mentioned–as my new friend was filling a bucket with rich, creamy milk–that I was going to make butter, and she pulled out several jars of heavy cream. “Well, you’ll need cream, then,” she said, as she helped me load up my car. Okay. My new friend sent me home with 6 2-quart jars of heavy raw cream, and a 5-gallon bucket of raw milk. I felt like a queen, loaded with riches from a foreign land. Gold. Diamonds. Precious gems. Raw cream and milk.

A very clueless queen. I had no idea how I was going to transform that lovely raw cream into butter, and to complicate matters, I had a very busy week ahead of me. No blocked-out hours on my calendar said “butter-making day,” alas. Only a half-hour or so, here and there. How was I going to accomplish all this butter-making in the least amount of time possible?

I had a few moments before I needed to fetch Malachi to his piano lesson, so I did a quick perusal of articles on the internet on how to make butter. This is what I found:

I actually had about a half an hour, and I was still curious about using my Bosch mixer, so I set up both of my workhorse kitchen appliances and decided that I’d let them do a fun little race. I put a quart of heavy cream in each one, my KitchenAid mixer (with the wire whisk) and my Bosch Universal Mixer (with the double wire whisks).

I gave my KitchenAid mixer a little fortifying pat. She was definitely the underdog, since she is over thirty years old (yes!). “Only five minutes, the article says, and it’s on the internet, so it has to be true,” I whispered to her. “Courage.”

I had purchased a replacement Bosch mixer this summer, so my Universal is only a few months old. He definitely had the advantage.

I dug the raw heavy cream out of the jars, and put a quart of cream in each mixer. 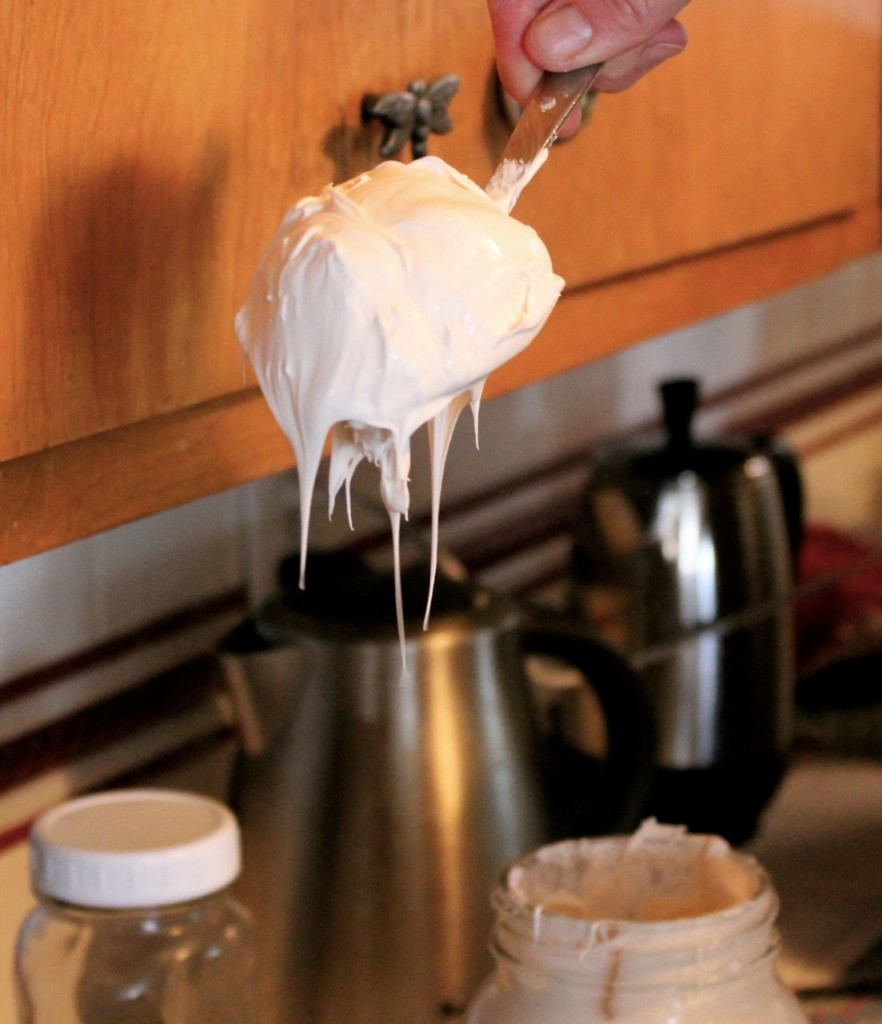 Can you believe this? Wow. Now this is what you call HEAVY cream.

(I was in cream heaven, Gentle Readers. Never had I seen such luxurious stuff. If I hadn’t already made plans for the stuff, I might have just taken a bath in it.) 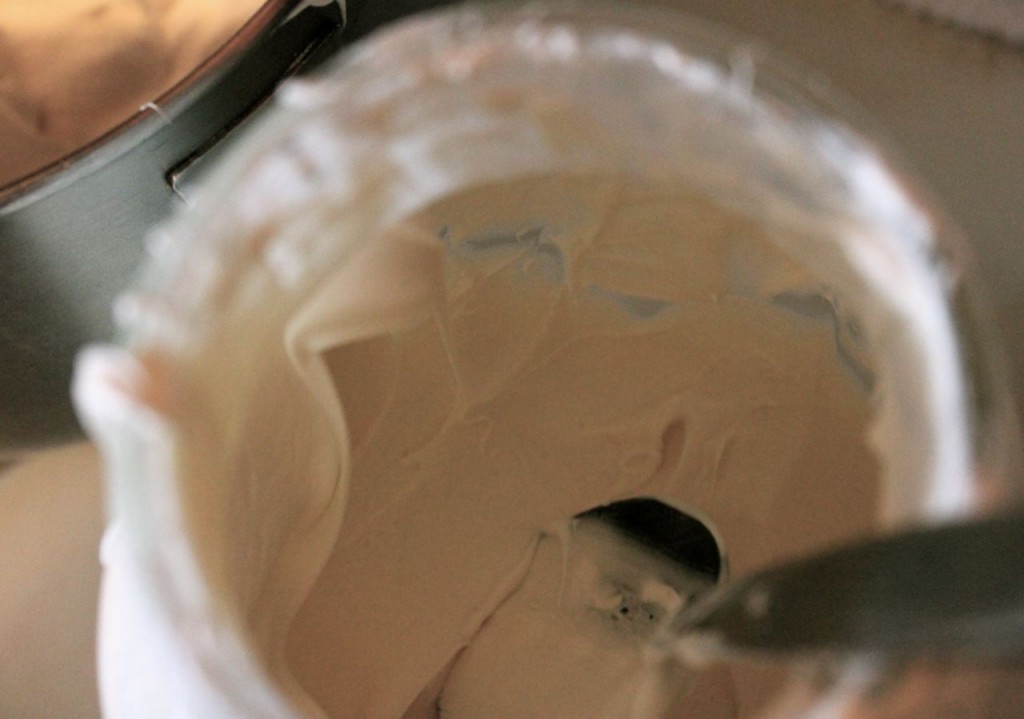 Creamy. Thick. Delicious. I think I’m in love. With my cream. Somebody help me.

Of course I didn’t have quite that much of it.

I readied both the KitchenAid and the Bosch, and set a timer for 5 minutes. According to the internet article, the KitchenAid butter would be done before the timer went off. So what would my newer, bigger Bosch do? I couldn’t wait to find out. Butter in 3 minutes? 2? The suspense was killing me!

I started both mixers. They were off!

Assuming that the watched-mixer-full-of-cream-won’t-make-butter principle here is apt, I busied myself with kitchen clean-up. How fortunate, is it not, Gentle Readers, that there are always, always little duties to do in the kitchen? I washed a few dishes. I swept crumbs off the countertop into the trash. I put away roughly twenty-thirteen items that didn’t belong there, all the while listening for the telling slosh-slosh of buttermilk, which (according to one internet article) would indicate that the butter-making was coming to a satisfying conclusion.

Nearly five minutes in, I peeked into both the KitchenAid and the Bosch, a bit dismayed to see only lovely whipped cream. The timer went off, and I started it again–for another 5 minutes, although of course the beautiful butter would be formed before it went off. Wouldn’t it?

I swept the kitchen floor. I fed my sourdough starter. I sighed. I sat down for moment. I made myself a cup of tea. I cleaned out one shelf inside the ‘fridge. I put clean eggs into cartons. All while my machines whirred on and on and on . . .

Alas, my KitchenAid was starting to smell hot, and I worried over it, wondering if this task was too much for its approaching-middle-aged self. The timer went off again. I stopped the machines, and studied inside both of them. The cream now was beginning to look a little raggedy, but clearly was still not butter. I briefly calculated how much a pound of butter would cost me, if I had to buy a new KitchenAid because of it. Was it possible to fail at making butter, I wondered?

I took a deep breath, and started both mixers up again. I busied myself with pulling out greens and carrots and other salad ingredients from the ‘fridge, and making a salad for lunch. I was chopping green onions when I heard something different, from the Bosch. A bit of a sloshy sound. I hurried to it, trying to act casual, lest the cream change its mind about becoming butter.

What was inside the bowl was no longer cream, but it wasn’t quite butter yet, either. I let it run for just a minute or two longer, and then I heard it and saw it: the satisfying chunk-slosh of a mixer full of butter and buttermilk. I let out a squeal, and the kids came running.

All this, while my KitchenAid continued to run on and on. . . After another few minutes, the KitchenAid, also, was sloshing and chunking, and it had also succeeded at making its first batch of butter, ever. I decided it was its last, too–since the Bosch was quicker and better at making butter, and since my Kitchenaid is so old.

Better to leave the tough tasks to the younger folks. Say I. 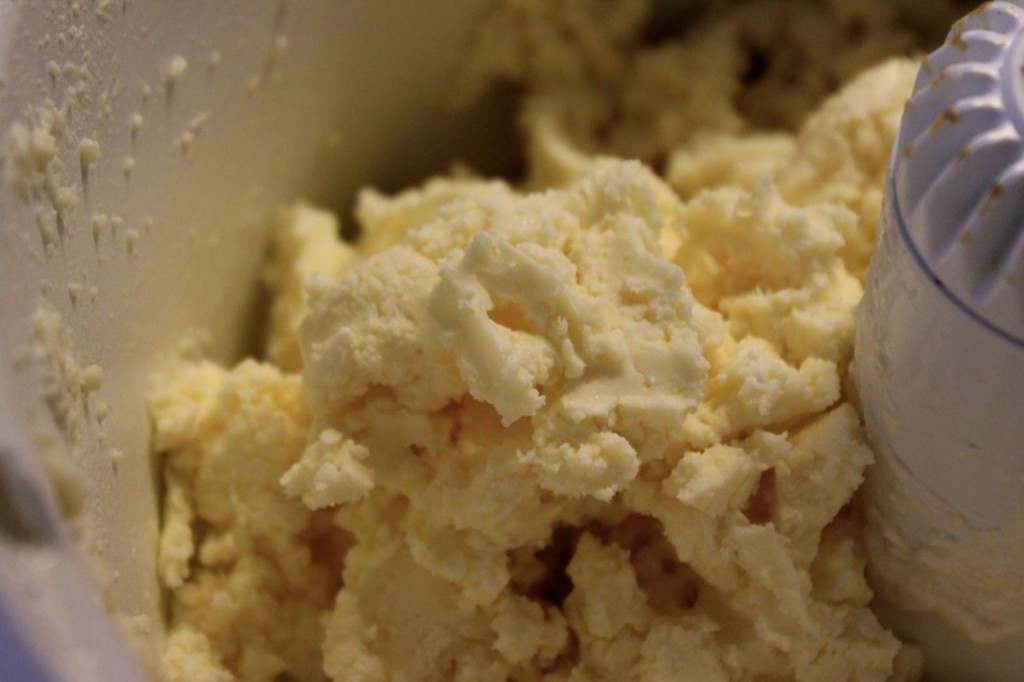 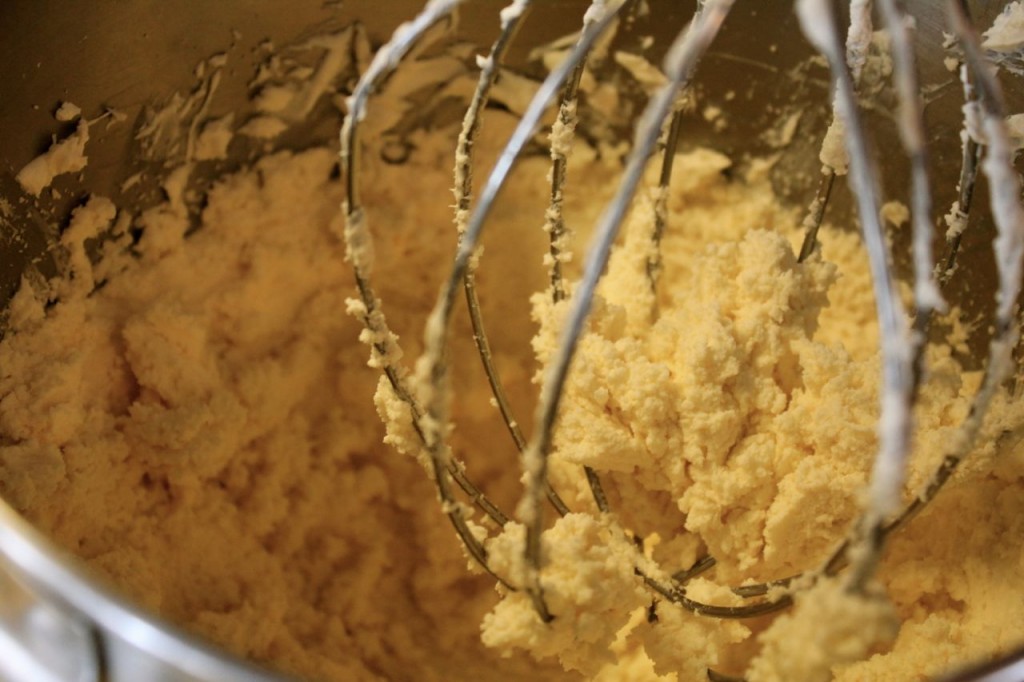 The next thing to do, I guess, if you don’t want your lovely fresh butter go sour, is to wash it and squeeze it and press it, so that’s what I did next. I washed it until the water ran clear. It just took a few minutes. 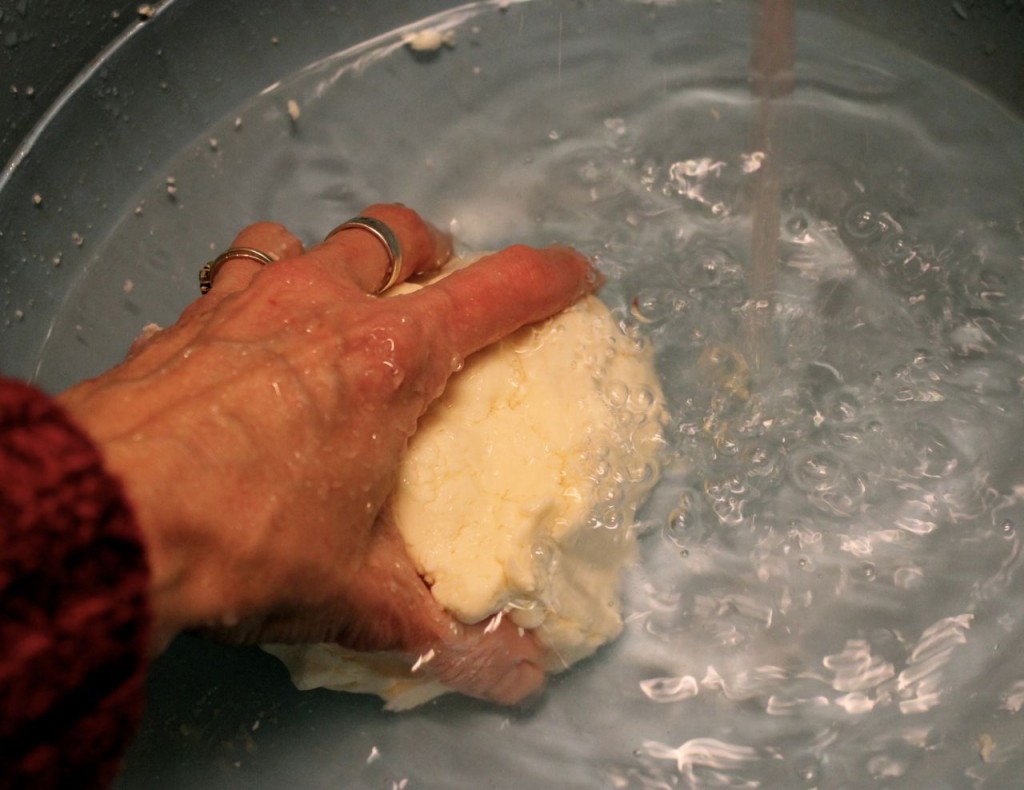 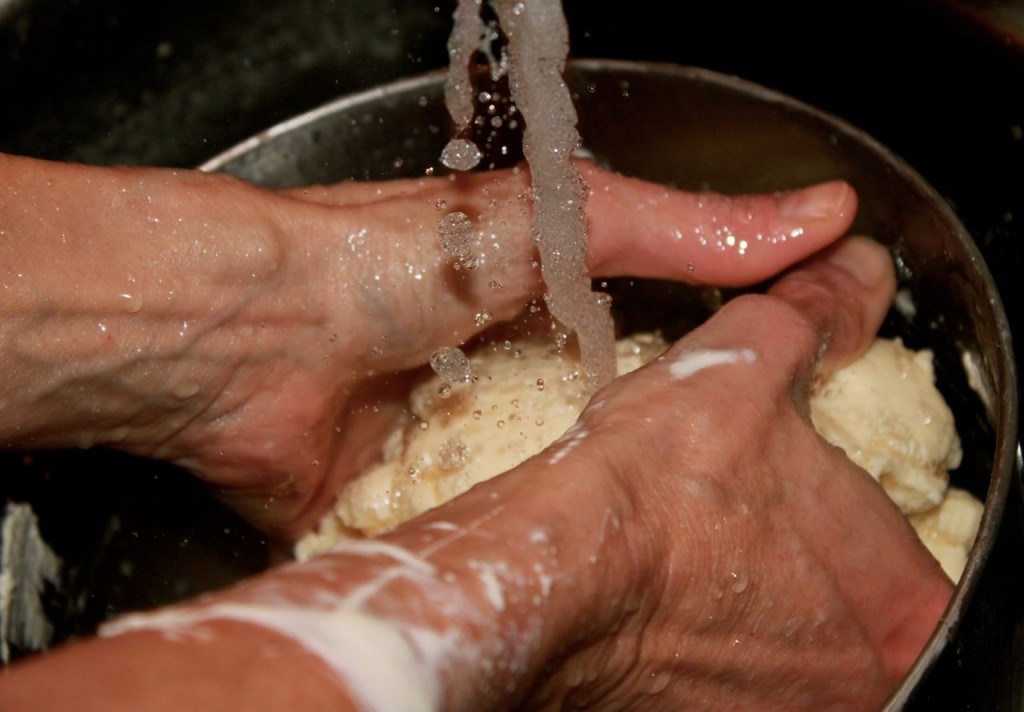 And then I pressed it into little balls, not because I read about that on the internet, but because I wanted to.

To recap, this is how you make butter from cream:

I promptly put one ball into a little bowl on the countertop, and the other balls into freezer bags and into the freezer.

And since we just happened to have some fresh bread on the countertop . . . 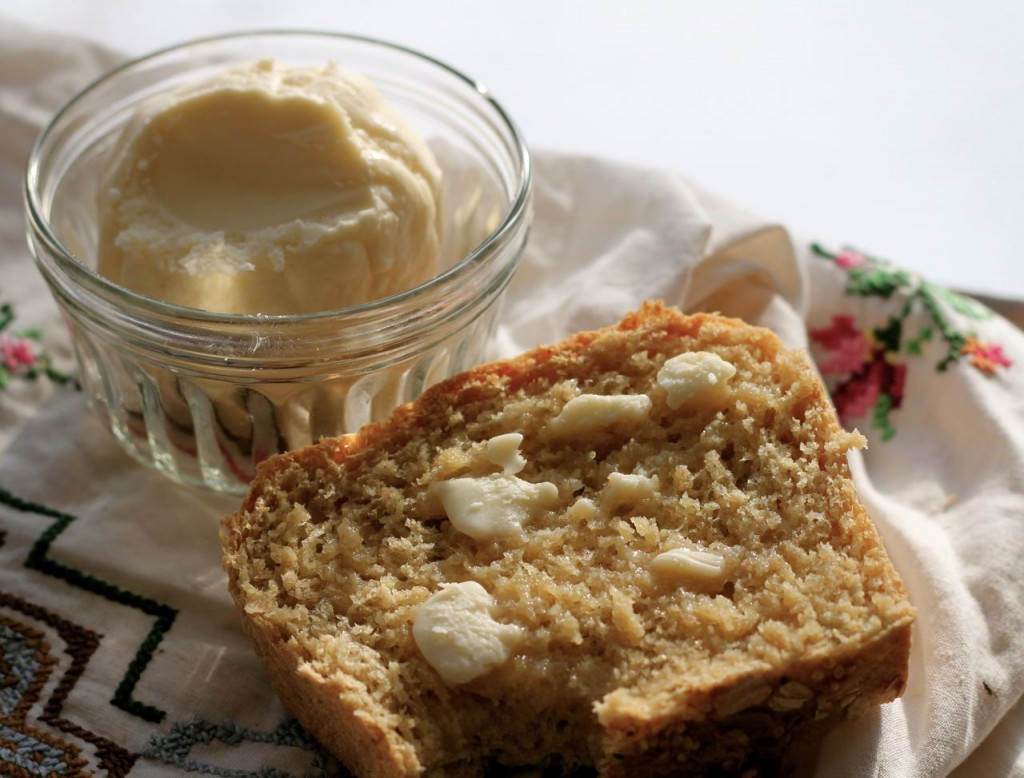 As always, thanks for reading!