I’ve changed my mind about meat chicks.  So there.

I’ve raised these chickens before, but have taken a few years off.  They are a hybrid meat bird, designed to put on weight very, very quickly.  They are placid and unassuming.  They are a breed without guile. These chickens are also prone to health problems because they grow so fast:  leg and heart problems are the most common, and in my experience can be avoided by not allowing them to eat all hours of the day. They are the couch potatoes of the chicken world, and that’s exactly what they want to do.  Their days consist of the following routine:

I have read articles written by homesteaders and others who rail against these chickens, saying that it’s unnatural for them to grow so fast, that it’s better to grow the “heritage” chickens that grow more slowly and not as big.  But I can’t ignore the economics of growing chickens for meat:  the Cornish cross chicks will be ready to butcher (a good 4.5 to 5 pounds or more) in 8 to 10 weeks.  A heritage breed will take 5 months, at least.  That’s at least twice as long to care for and feed, in order to get to butchering weight.

Though I butcher my old hens every fall, socking them into the freezer to simmer for soup and stocks and dumplings and so forth, I haven’t raised meat birds in a few years. It’s a bit of extra trouble, and my chicken coop isn’t big enough to offer shelter for these meat birds, along with all my laying hens. My good husband and son Timothy built me a open-air meat bird enclosure of sorts, out of PVC pipes and chicken wire, and that’s what I use for my meat birds.  It’s sort of a chicken tractor, and it allows the birds opportunities to forage and dig for bugs and worms, and eat a bit of grass.  When the ground underneath the enclosure begins to look a little wan, I’ll move it to a new space.

After reading Animal, Vegetable, Miracle by Barbara Kingsolver, (I wrote a blog post about it right here) I’ve had a hankering to really fill up my freezer with good quality food, from our own little farm.  OId hens are tasty and make great soup, but if you want a big, plump roasting bird or a great meaty fryer, you can’t beat these Cornish Cross chickens.  In my humble (and reformed) opinion, that is.

I’ve missed having big, meaty chickens that I’ve raised myself in the freezer, to be honest.  I feel a pang of guilt every time I buy chicken at the store, because I know how these wretched birds are raised.  I love chickens, I do, and I think the best thing a chicken-lover can do (with regards to eating chickens) is to raise your own.  So I bought a batch of these little fluff-balls last week.  They won’t be big and meaty for some time, as you can see. 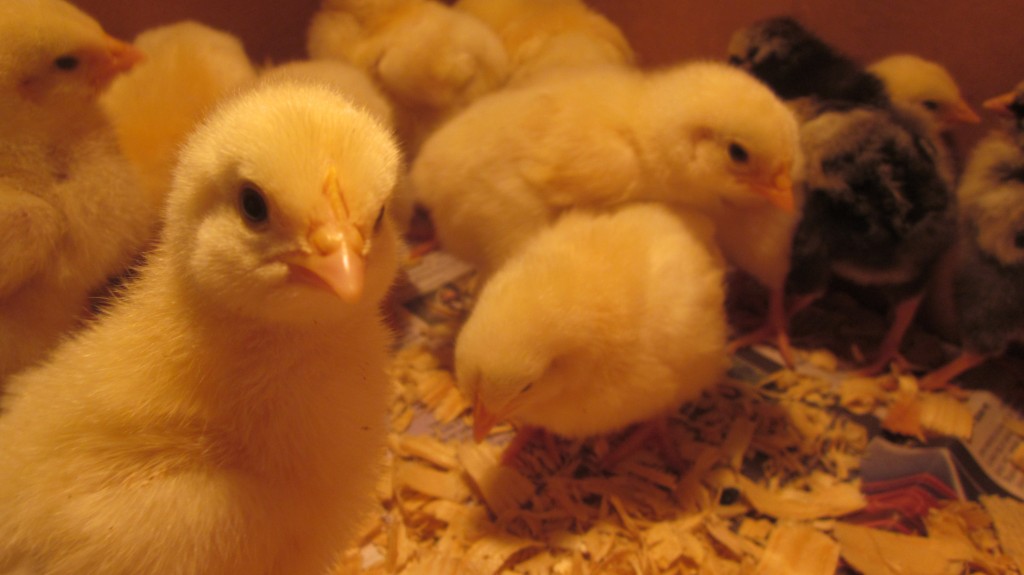 I’d forgotten what cuties these chicks are. 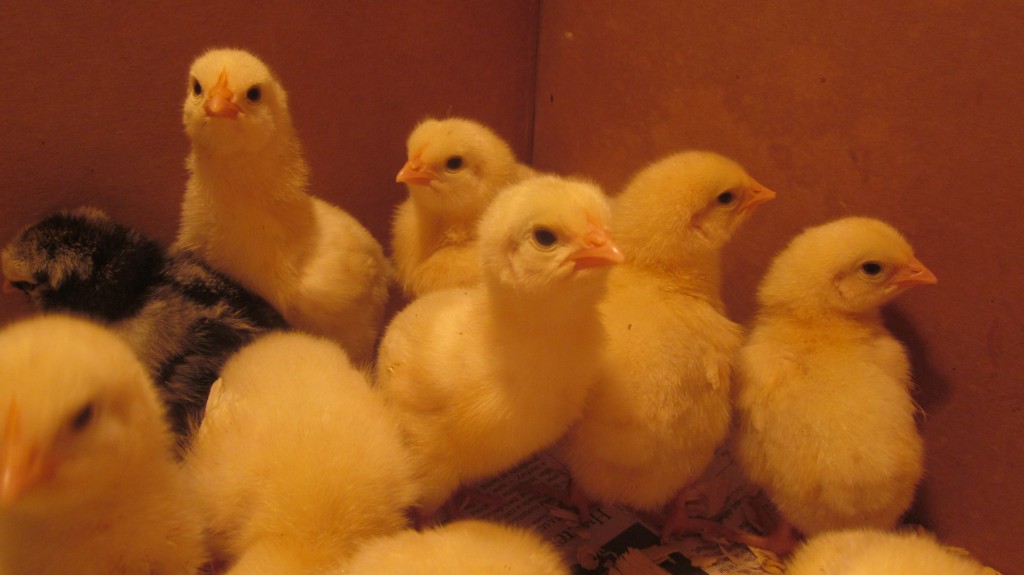 Raising meat birds is different from raising pullets (which will be my laying flock for next year).  My pullets right now are hanging out in the separate nursery area of my chicken coop, all feathered out now, though only half grown, and when I walk into the coop they are flying and making all kinds of racket.  They are nearly old enough for me to crack the door open and let them begin to explore the world outside the nursery, with its wonders of weeds, grass, seeds, and bugs.

But when I go into the coop, they act like they think I’m going to wring their necks and eat them right then and there. Every stinkin’ time. They bunch up in the corner together, terrified of me, can you believe it, their benefactress, as I carry feed and water in to them.  Hello, chickens, I’m bringing you breakfast! Chickens have very short memories, apparently.

But these little meat chickens are so calm and quiet and unassuming.  When I cleaned out their box this morning I put them all in a smaller box to move them.  I was amazed that they placidly just stayed put in that box.  The sides were very shallow, just a few inches high. They just stood there.  Now my pullets, on the other hand, would have been all over the basement, making lots of noise, hopping and flying and making desperate attempts to flee, peeping very loudly, if I put them into that shallow box.  Which, of course, I wouldn’t. 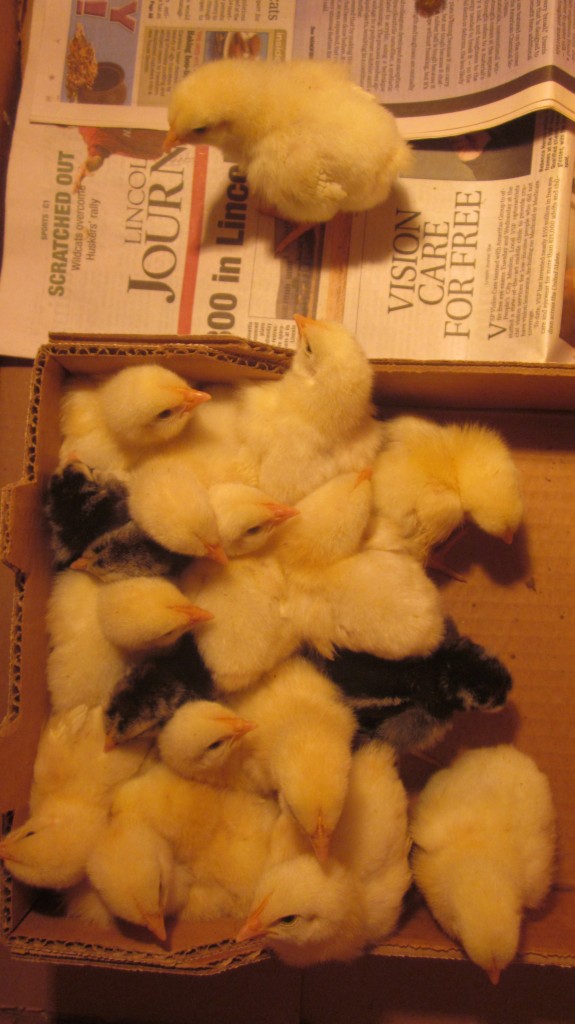 Here they are in their shallow little box. Only one has thought about jumping out, so far. Most are toying with the idea of a nice nap.

In a week or two, these little peepers will be too big to be in the box in the basement (although I’ve already put on an addition, and am planning a second) and will be covered with white feathers, so I’ll move them into their open-air enclosure, and they’ll enjoy the weeds and the bugs and the grubs and the whatnot that chickens like so much.

I have actually considered an experiment: putting some of these chicks under a couple of broody hens that are doggedly sitting on eggs in the coop. I may try that tonight, after the sun has gone down, and just see what happens. It would be awesome to delegate some of the chick-raising to a broody hen, I’m thinking.

Here are a few things that I’ve learned from raising these Cornish cuties:

And oh, I almost forgot–what’s for dessert?

If you have the space and the time to raise a few Cornish cross chickens, you should try it!  In just 8 to 10 weeks, you could fill your freezer, too, with some of the finest chicken you will ever eat!

20 thoughts on “Cornish cuties in the basement”