about things. I’m trying to do you all a favor, by writing shorter posts, you see.

It’s not working out very well.

I just have a lot to SAY. And I enjoy the writing process so much. Putting the words down to paper and then reading and changing up what I just wrote. It’s just so much fun to me.

Here’s something that I’ve learned about myself: if I am enjoying what I’m doing (writing, drawing, playing the piano, reading to little Mack, cooking, baking, pulling out slivers), I don’t hurry to get to the end. I just relax and enjoy the process. This gets me into trouble time and again. However, If I’m doing something I don’t particularly enjoy (cleaning, let’s say, paying bills, cleaning out the cat box, hauling wood in sub-zero temps) then I do it as quickly as I can, so I can get-it-over-with.

Can anybody relate with me on this, or is it just me?

Anyway. I know why you clicked on this post, and that is so you’d get to see the mummified mice pictures, and I will not disappoint you two days in a row. If you didn’t read Part 1 of this Basement Remodel Saga, you really ought to and you can find it by clicking here.

To recap: Amalia and I pushed our fears roughly aside and spent a dusty, dirty hour or three pulling down ancient (I think it pre-dated Noah, to be honest) dusty, dirty insulation from our basement ceiling. I love it when I find treasure in our house, and I have found plenty (but that’s another story for another time). But when Amalia and I pulled down the old insulation, we found some beautiful old-wood beams holding up our house and two (count ’em, two) mummified mice, and some old chalk writing.

Treasure? Well, maybe not, but fairly interesting finds, you must admit. And I must remind you that old saying, Treasure is in the Eye of the Beholder. That’s how it goes, right?

Here’s the first mouse we found. I’d say this is a true mummy, in its entirety just completely dried out and preserved. It weighs nearly nothing. I think it’s awesome. 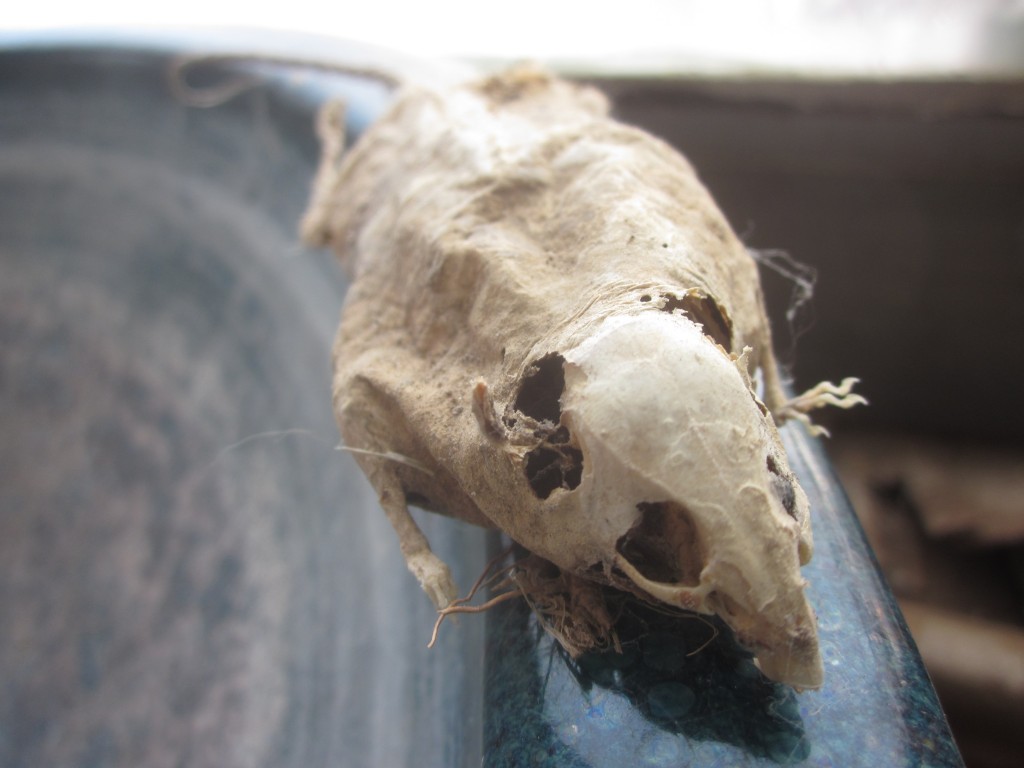 I named him Yorick, so I could say “Alas, poor Yorick, I knew him well.” Even though I actually didn’t know him. Not well, anyway.

Probably an old mouse who died a peaceful, quiet death. You can tell how relaxed he was when he . . . moved on to his eternal reward. Pretty cool, eh? Now aren’t you glad you stopped by today?

And here’s the second fellow we found. I don’t think he’s a true mummy (I know a couple of boys who would argue this point) because part of him is rotted away. And I have the feeling his death was not as beautiful as the first guy. He seems a bit frazzled, kind of like me, in the mornings, during Christmas season. 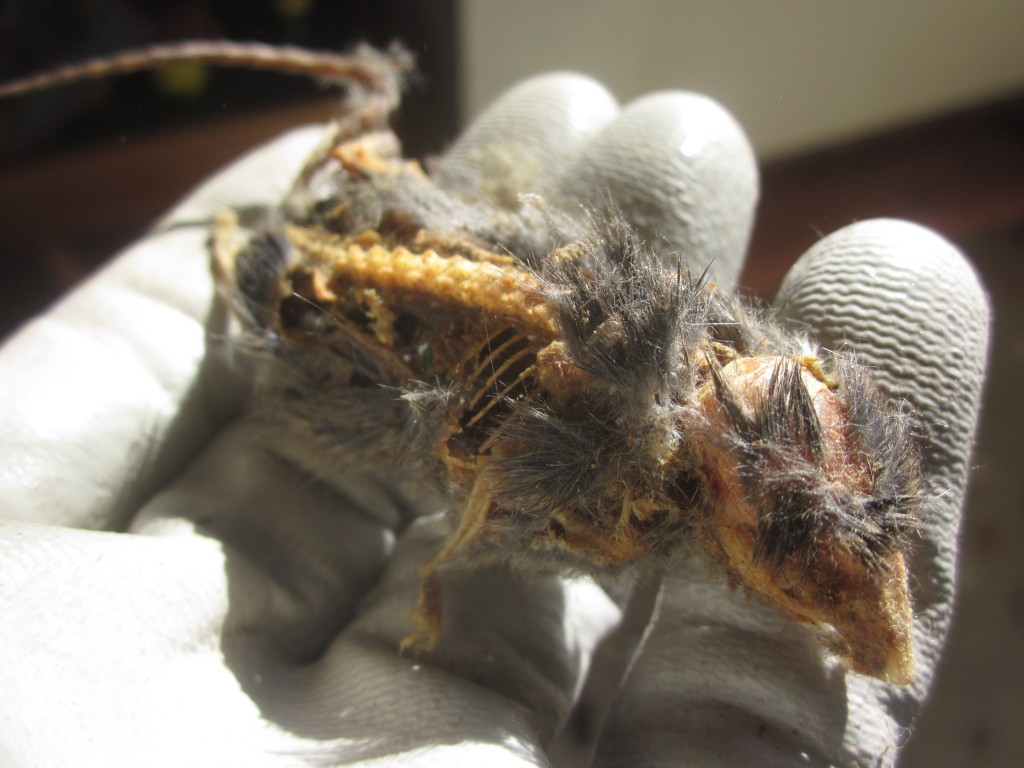 This one I just called “Jerry.” Yup. I feel like this most mornings.

I’m sorry about the gristly nature of these photos. Kind of. This is blogging at its finest, though, I assure you. I do. If you didn’t know it before, you know it know: only the truly great blog posts contain gritty, graphic photos like these.

Do the other blogs you read contain such interesting things? No? Hmm. Better re-think what you’re reading, dear, patient Gentle Reader.

But there’s more! Here’s something else we found: 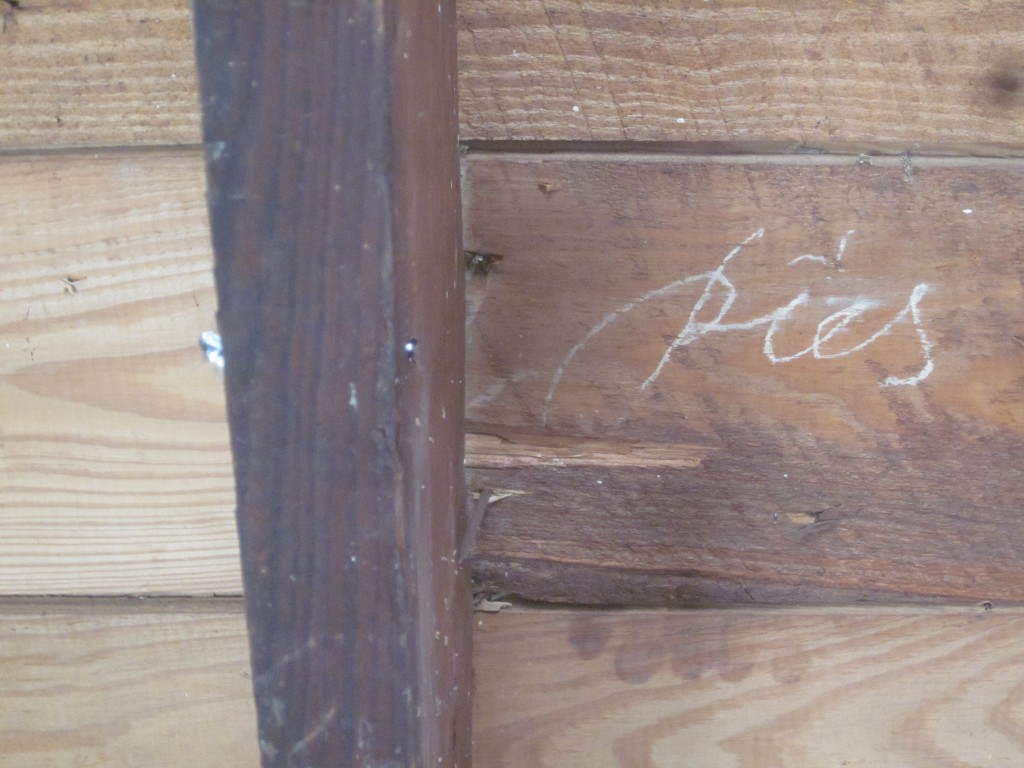 On the expanse of the hundred-and-more-year-old ceiling, one word is inscribed in chalk: “pies.” You know what this means, don’t you? Two things, I reckon:

1. The man who wrote the word was like me, in that he was hurrying through this difficult task–building the depot–by dreaming about the reward at the end: pies. Maybe it was the day before Thanksgiving. Or the day after Christmas. Or maybe his wife, he knew, was at home making him a mincemeat pie for supper. In any case, that was what was on his mind, as he worked. Pies.

2. Being pie-obsessed, he was clearly related to the Young family (my people), whose dreaming of pie and making of pie and talking about pie, is quite well known.

So that’s what we found hidden underneath the insulation in our basement ceiling. I have a feeling that more treasures just are waiting for us as we continue toiling on our basement remodel . . . I’ll keep you posted, Gentle Reader!

As is my wont, I’m linking this post with that cool weekly event, the Blog Hop over at The Prairie Homestead. I learn something new every week there, and I’m quite sure that you would, too! Hop on over!