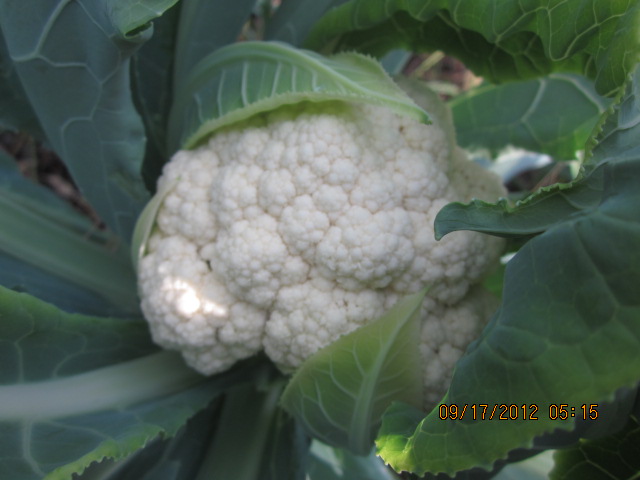 The prettiest cauliflowers that I have ever raised, grew in a neglected bed of spent plants, in the late fall. Now I’ve learned a lesson: don’t clean away the cauliflower, broccoli, or cabbage after they’re done producing in the spring!  Let them heal, rest, and they might just put out new fruit in the fall!

As I write this, we are expecting a killing frost this very night.  That means that the plants in my garden that have continued to produce so well for me since early summer–primarily my gorgeous pepper patch, and my dense and scary tomato jungle, and my productive eggplant patch–are toast.  If it gets as cold as the weatherman says it’s going to get this weekend, they will all be dead.

I can’t say that I mind too much.  Because of an unusually early and warm spring, I got all these plants in at least two weeks early this year.  My melon patch–which I valued highly, and from which I harvested melons from mid-summer to early fall, fizzled out weeks ago.  I had lots of summer squash and a few winter squash, but the squash borers and the squash bugs took care of them long ago, too.  I’ll miss my cheerful zinnias and my aromatic fennel.

This afternoon I’ll cover the plants in my garden which might actually make it through this freeze:  two kinds of kale, cabbages, broccoli, and cauliflower.  We’ll see if they can make it through the weekend.  As the rest of the garden peters out, these cold-hardy cucurbits become more and more precious to me.

I’ve learned something and I’ll determine from now on to leave the cabbage and the cauliflower and the broccoli and the brussel sprouts alone, after they do their producing early in the spring.  Usually, in my zeal to keep the garden pretty and productive, as soon as they are spent each spring–usually by early June, when it starts getting hot–I chop them out with my massive Dago hoe, and throw them to the chickens.  Then I go have a glass of ice tea, feeling quite tidy and efficient.

This year I just ignored them all.  Now and then when I’d pass by that unkempt bed, I’d have a pang of guilt–it looked so messy, I was such a garden-slob, why didn’t I have my hoe with me because then I could clean it up?

Then a few weeks ago, when the nights had cooled down and the days weren’t so hot, too, I noticed, through the weeds, something really amazing and delightful in that tangled mess.  The broccoli was putting out tiny, perfect, beautiful little mini-heads.  Each homely cabbage plant had put on several miniature cabbages.  And the cauliflower–oh, the cauliflower–it had never looked so good!  Somehow it had healed up and grown big healthy new leaves, and surprise, surprise–a brand new beautiful little baby cauliflower head in the center of each plant!

I was so delighted by this discovery that I ran and grabbed a bale of mulch straw and my garden gloves and set right to work cleaning and weeding and mulching that bed.  Then I set up the sprinkler and watered it.  Here I had thought this part of my garden was finished, when actually it was just getting its second wind.

Since then, we’ve eaten many meals with shredded cabbage, cauliflower, and broccoli tossed in.  Stir-fries are especially good with these additions, but they are delightful in salads and casseroles, too.  The cabbages are delicious and mild, the cauliflower pleasantly free of bugs.  My kale is still going strong, too, naturally.  But then kale is the garden trooper, producing and producing until . . . I don’t know when.  If you don’t grow kale, you should.

So I’ll be covering my kale this weekend, and also my cabbage, cauliflower, and broccoli bed, and I’ll be hoping for the best.  If they make it through the weekend, we ought to have plenty more meals with those tasty additions!