Babes has proven to be an exceptional mama.  It’s fun to watch her. She spends her days teaching her chicks which little bits are worth eating, how to scratch for goodies, how important it is to come when she calls them, and how to burrow under her when they are cold or scared.  Though she–like I–would rather be outside than inside at any and all times, she has settled down into the cramped and rather dark “nursery” to be a mama for a season.  Her little chicks are so sweet and cute and soft that she’ll do anything for them, and for now that means staying inside, where they are safe. 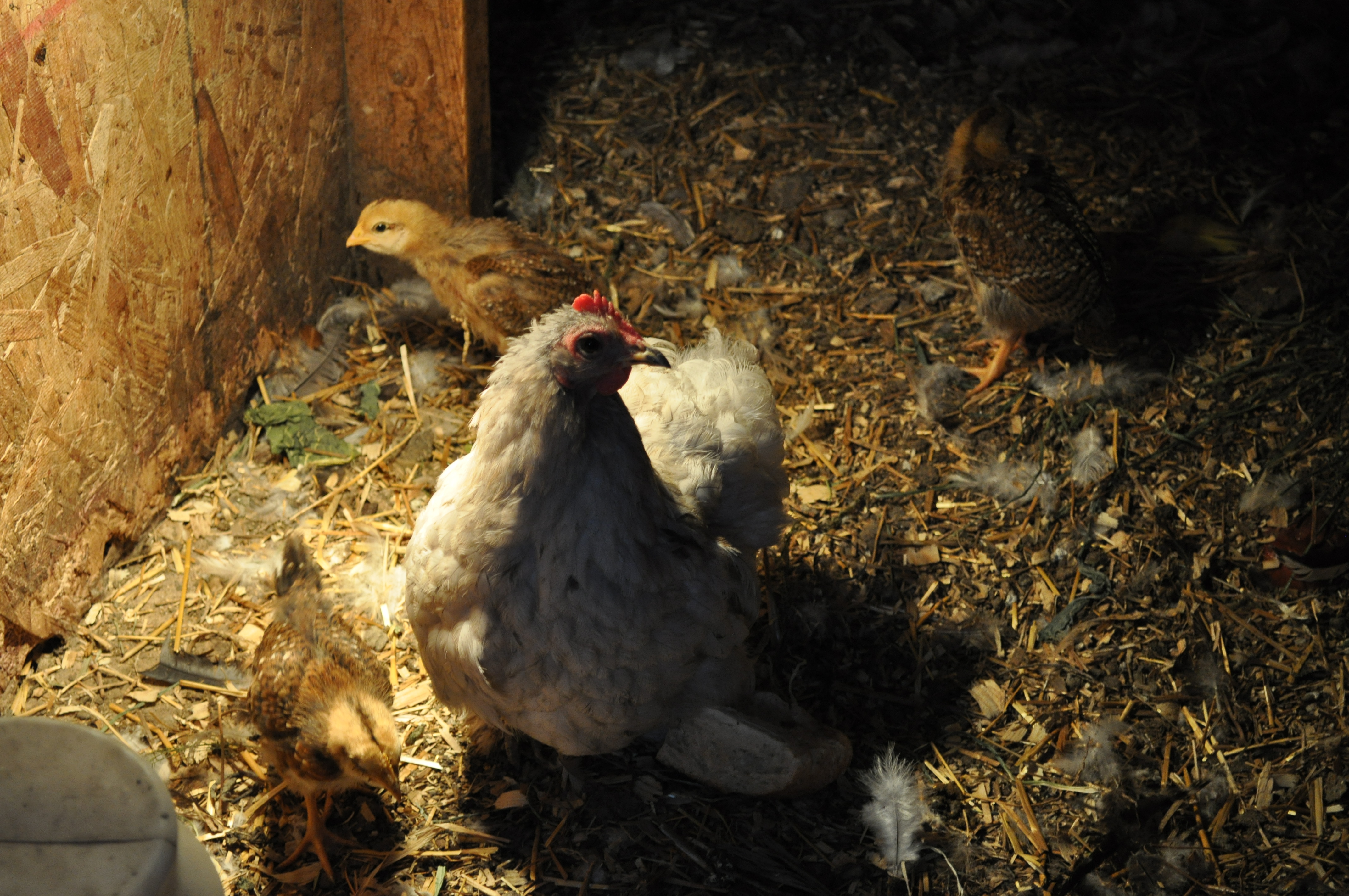 Here’s Babes with her chicks, inside, under a heat lamp.

Oh, how great is the number of sacrifices that mothers instinctively make for their children! (Do I hear an “Amen, Sister!”) When I walk by my piano on the way to the kitchen to make supper, or to the table to teach little Mack his math lesson, or to the caboose to help Amalia clean her room,  I touch it briefly, knowing how much pleasure it would give me to just sit down and play for a time.  (And I’m going to do it, too–soon!)  But for this season of intense motherhood, I’m okay with putting my children’s needs before mine.  My college daughter Bethie calls and says she’s on her way home.  It’s 10:30 p.m.  I’ve been up since 5:00 and can barely keep my eyes open, but I wait up for her so I can hear about her day.  (She would tell you that I don’t do this every night, and she would be right about that.) My son Timothy has a job in Lincoln and I let him use my car nearly every day, leaving me stranded out here in the sticks–but I don’t mind (okay, some days I do).   It’s just for a time, and he’s so good to me. 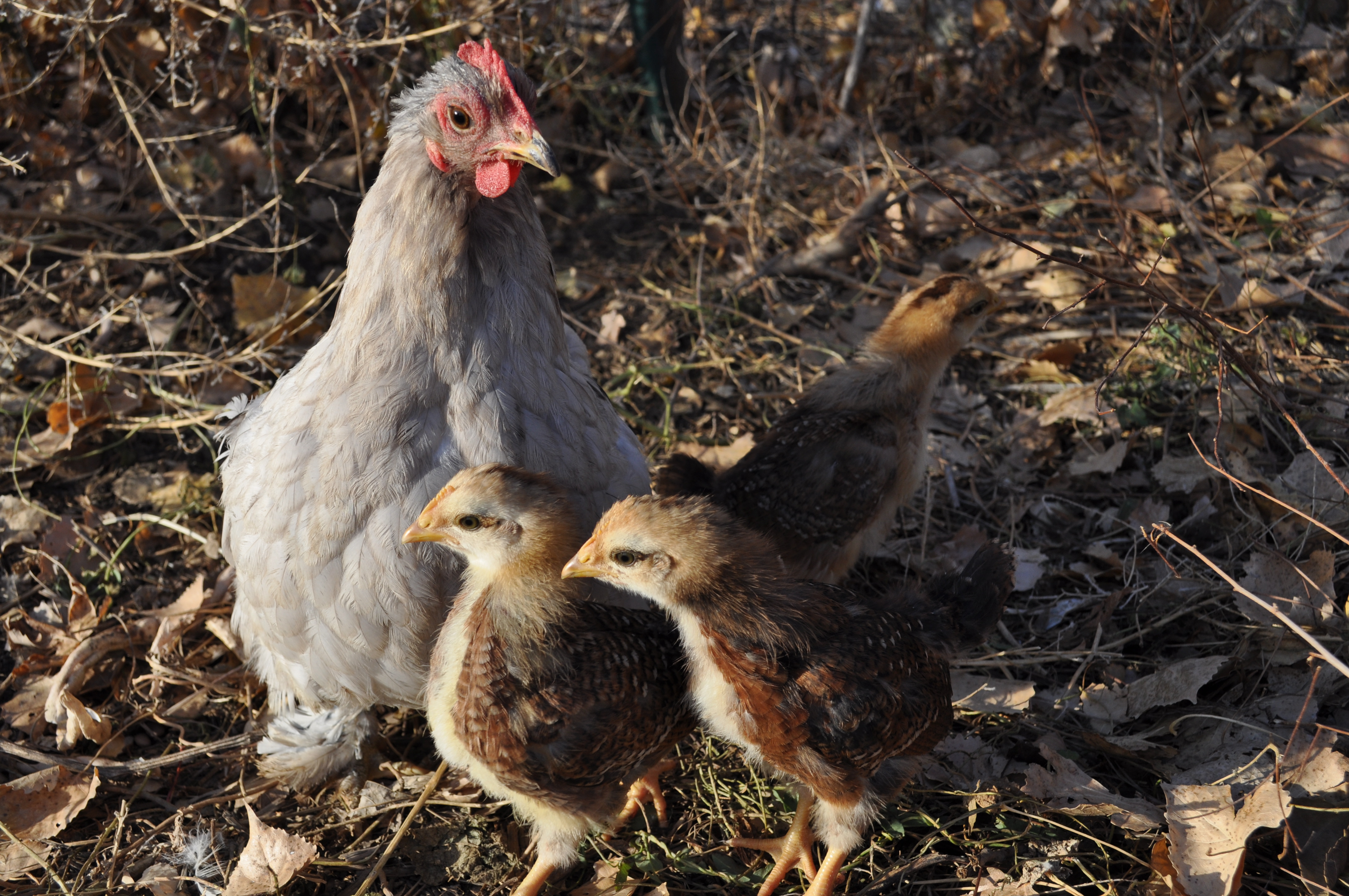 Babes showing her babies the exciting world outside.

I never could have been so unselfish before God gave me these children.  There are probably many, many people who don’t have children who are unselfish to a fault.  I know for a fact that I learned this measure of unselfishness over time–when I was pregnant for the first time and always hungry, I resisted the urge to eat anything sweet because I knew it wasn’t the best thing for the developing baby inside of me.  I remember being in a drugstore one day, large with child, and looking longingly at boxes of one of my favorite candies–Aplets and Cotlets.  I made some self-pitying remark that I’d have to wait until after I had had my baby before I could eat sweets again. It seemed quite a sacrifice at the time. The clerk–a mother herself–laughed herself silly at me.  “That’s only the beginning, honey,” she said.  “Just–you–wait.”  At the time I thought her insensitive.  But she was right.

There is no end to the sacrifices a mother makes for her children–willingly–but they are loving sacrifices.  Babes right now sacrifices her intense desire to be outside–she must sense that I’ve opened the garden gate, thus allowing the chickens free range in what was a forbidden, yet very desirable, zone for them–the garden is littered with tomatoes that have been nipped by the frost, and yet are still good to eat (for chickens) and tender weeds (lots of them!) and many, many bugs just under the surface of the rich, dark loam. The chickens are having a heyday. 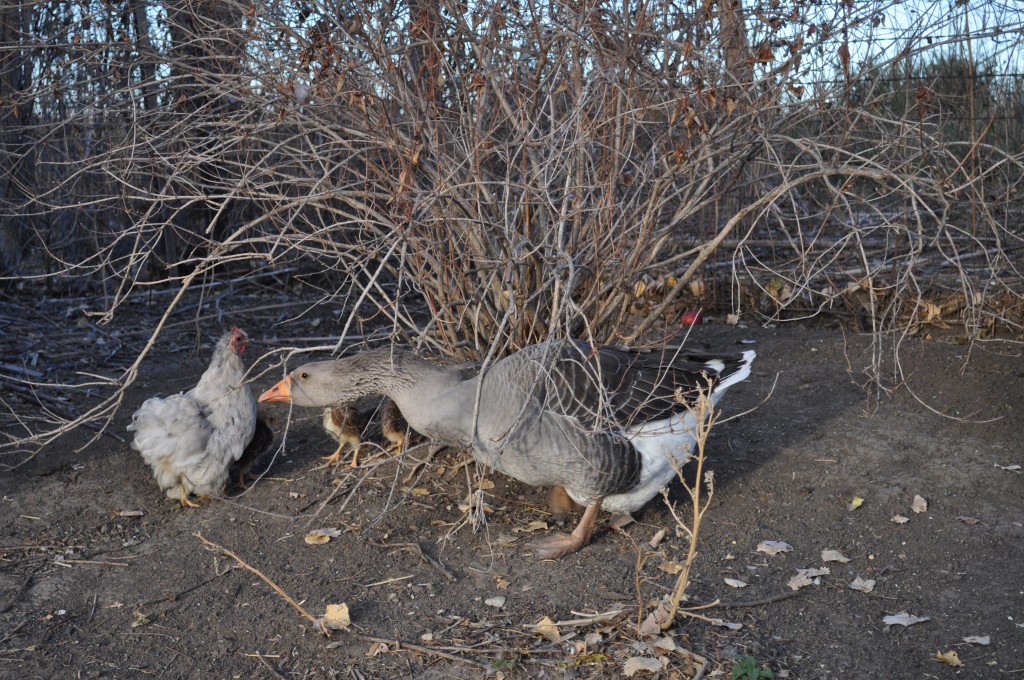 Our goose, Lucy, was very interested in the new additions . . . 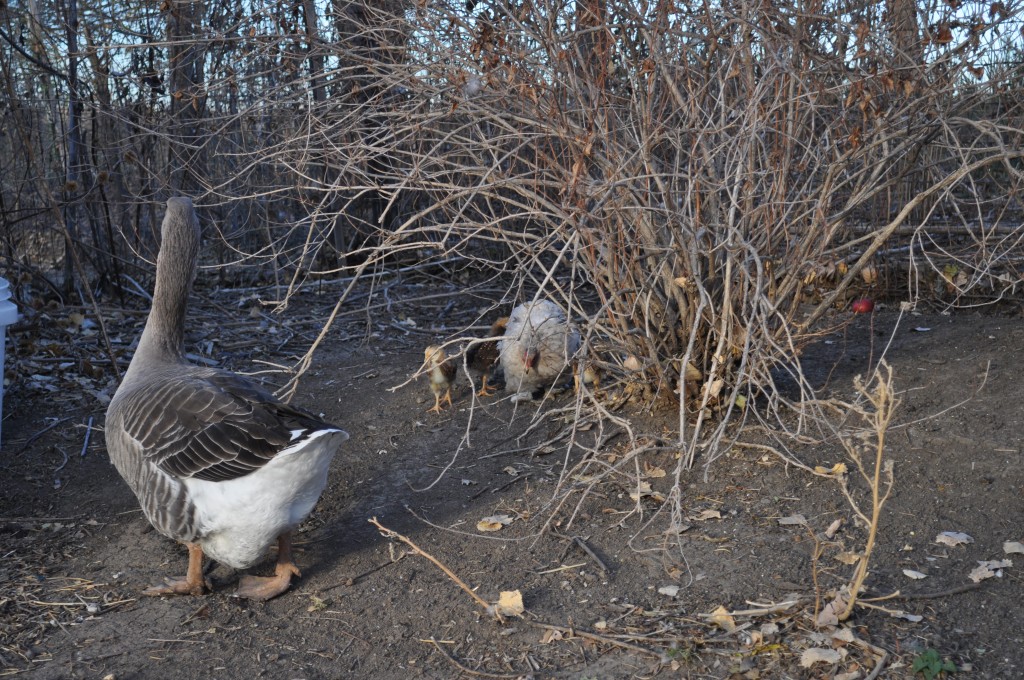 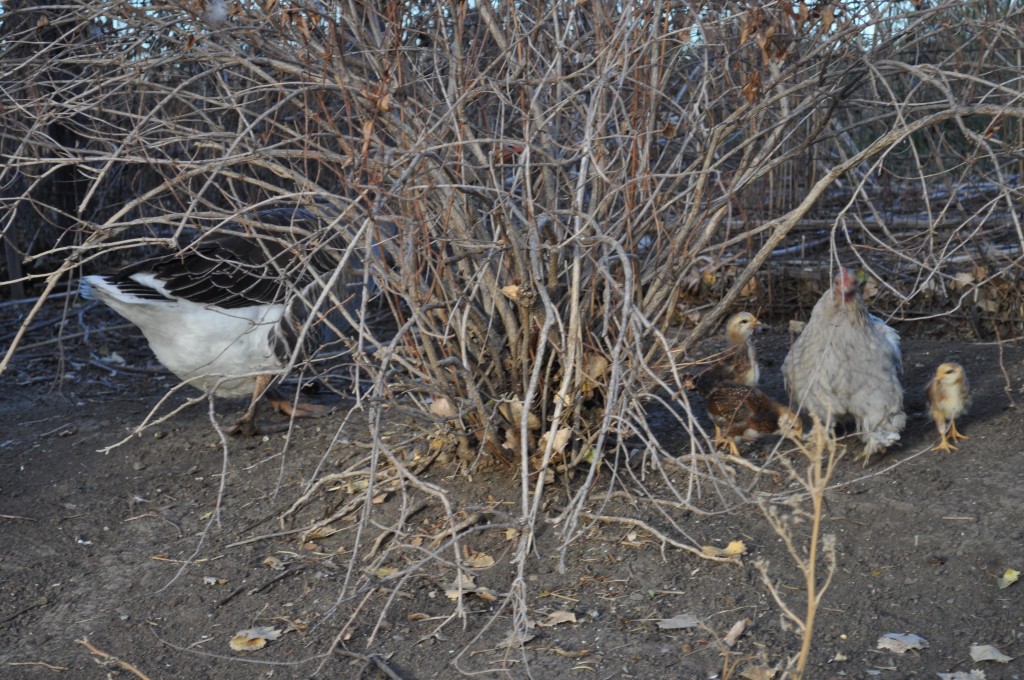 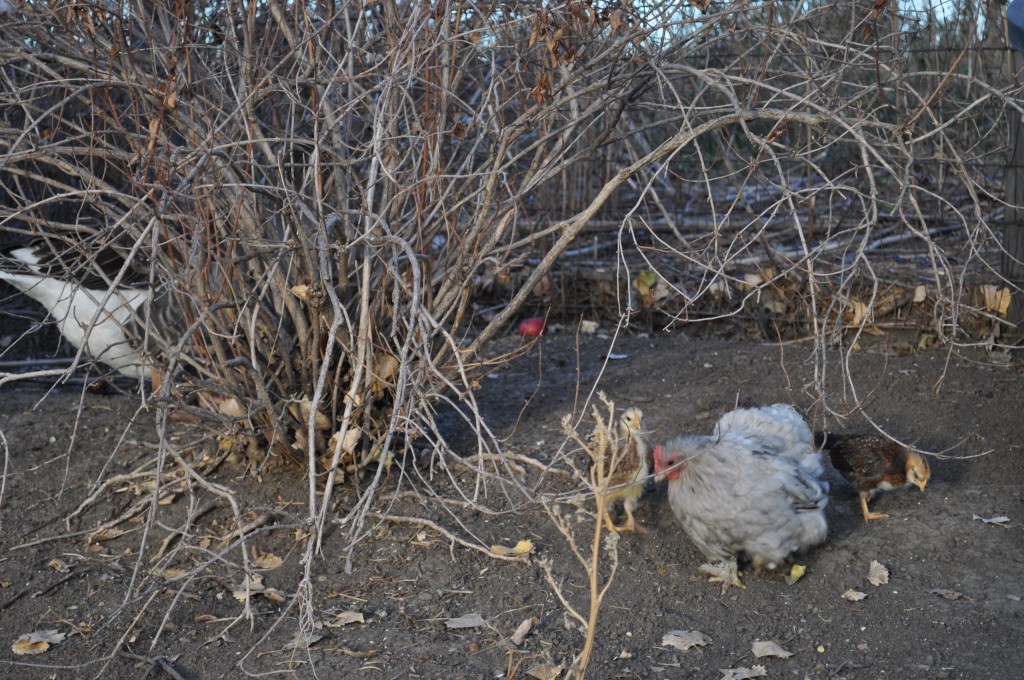 . . . while Babes tried to keep a few steps ahead.

Except for Babes.  And Puff, and Silk, and Oakley*.  But they’ll have their day.  On Saturday, if the weather settles a bit, I’m going to trundle the kiddos out to tear down tomato cages and clean up my gardens, to get them ready for winter.  I’ll likely move Babes and her babies out into the garden with us for a bit, where we can watch the little family and keep them safe from harm (and from cats and hawks) and so Babes can teach her little family about the great outside world and the risks and pleasures that it holds.

Of course, I’ll get nothing done because I’ll be constantly pausing to watch.  Oh well.  How often do you have babies on the place to enjoy?  The kids owe me for all those years of unselfishness on my part anyway, right?  They can do the work while I sit in the sunshine, on a picturesque stump, perhaps, and watch the pleasant sight of Babes teaching her chicks how grand and glorious a world we live in.  You can bet that I’ll have a camera with me, and I’ll post pictures for you, my faithful reader(s), no charge.  (Then, maybe I’ll go inside and play the piano for an hour. Or would that be pushing it a bit too far for one day?)

*Amalia chose the name “Oakley” for the third chick, because she admires the historical Annie Oakley, for her bravery and courage. If you didn’t read the story of why this particular chick was so brave, you can read about it here.

3 thoughts on “Puff, Silk, Oakley, and Babes: an update”