Yesterday was a bit of a piggy day. We tore home from church, ready to load up the trailer and the ‘Burb and head for the high school auditorium, Beverly-Hillbillies-style, where we would unload our crumbling flats, our painted sheets of cardboard, our bins and boxes full of stage dressing and props, and then head back home for another trip. We started out in a hurry, knowing how much we had to do in one afternoon.

We sold our massive horse trailer years ago (no longer owning any horses) and we knew we’d miss it every year at this time, and we certainly do. The small trailer we use belongs to my dad, and we appreciate it, but it sure is small for our purposes.

Bryan and the kids were in the ‘Burb, the kids hanging out of the windows, yee-hawing and gulping in large gulps of frigid air in their excitement (just kidding), and I was in Bryan’s car. They were the loaders and haulers. They offered to strap me to the top on a rocker, Granny-style (we did take a rocker with us) but I declined. I was the “Take-Mack-to-Taekwondo-and-then-gather-up-whatever-is-forgotten”-er, so I figured that was more important than fulfilling a childhood dream of mine.

Doesn’t everybody dream of riding on top of the vehicle, strapped in a rocker, scowling at the world, Granny-style? Of course everybody does. It can’t be just me, can it?

Tell me it’s not just me. 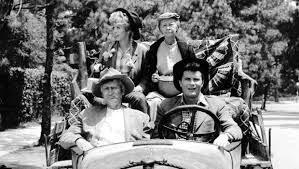 Maybe it’s more of the moving-to-Southern-California part as a new multimillionaire that captures my imagination, I don’t know. In any case, I do truly admire Granny’s new kitchen in their Beverly Hills mansion. All that space! And, of course, the Cement Pond. I’ve always wanted a pool–always–also, although today that’s not what I’d have in the backyard. Not by a long shot.

So we all happened to converge back at the house at the same time–Bryan and the loading crew in the ‘Burb and trailer, and little Mack and me in the car, just at the time that they were trotting up the hill and around the house. “They” being the pigs.

We’ve had steers in our yard before, plenty of times, almost always Black Angus. Several farmers around us raise a few every year, and they get out. They tear through our garden fences and nibble on my blueberry bushes.  They don’t worry me overmuch, because I have a secret weapon against marauding farm animals. I have Bea. 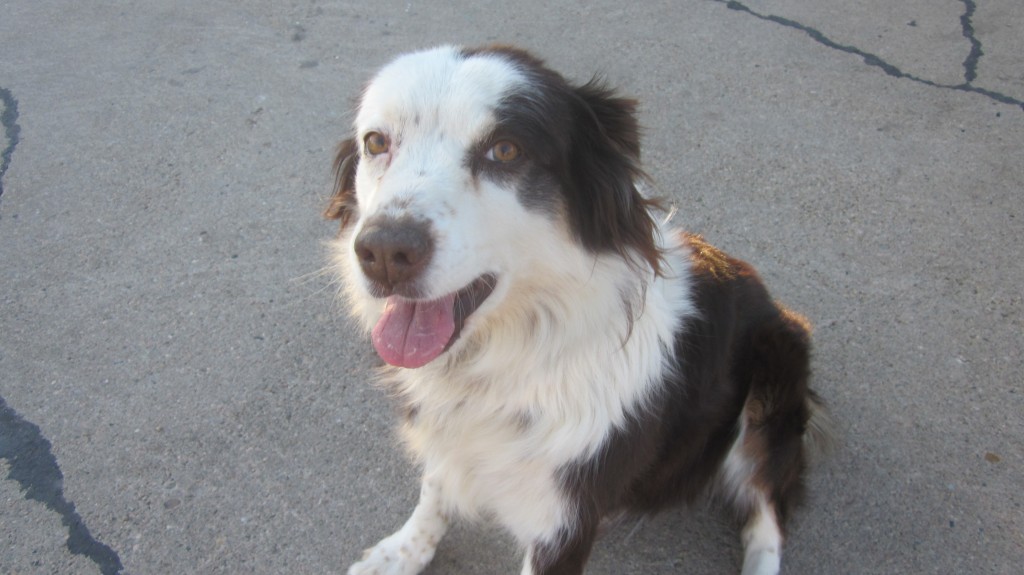 Here’s Bea. She’s something else.

I always call the farmers in my area before I let Bea go at them, because I’m never sure where she’ll take them–over to the next farm, or the next county? It’s impossible to predict. But if the farmers aren’t answering their ‘phones and the steers get started on my little orchard trees, why . . . I call Bea. Nobody gets away with eating blueberry bushes or nibbling on fruit trees around here. Nobody, baby.

Bea happily and quite adeptly gathers them up and takes them someplace else, en masse. I don’t know how she does it, since she has never been trained, but it’s pretty fun to watch: generations of good breeding, I guess.

Bea usually takes steers just to the next farm, and then returns–panting, happy, grinning all over, and spent. You can see it in her mien: This is exactly what I am made to do!! I’m sure she dreams about the episode for days.

But back to the pigs. We’ve actually never had pigs in the yard before, at least not that I know of. These were large ladies, sows (by the looks of things) and not at all in a hurry to leave. I took a few pictures (from a distance) and then groaned (not today! of all days, not today) and then headed inside to call the farmers in the area who had pigs.

There were three pink pigs and one brown one, so Farmer A said they weren’t his (he didn’t have any brown pigs). Farmer B said that he no longer raised pigs, only steers (and Black Angus at that) and then he promptly dropped what he was doing to come look at them and advise us. Farmer C didn’t answer and didn’t have an answering machine set up, either. Farmer D, after much confusion: (This is WHO?? Um, Amy Miller, over on Old Cheney– Whaaaat–Who the heck is Al Haney? No, no, no, this is Amy MILLER over on Old CHENEY . . . Okay, okay, what do ya want? I’ve got some pigs in my yard–PIGS?? PIGS??–Ah, don’t you raise pigs? YES I RAISE PIGS! WHO IS THIS?? Are you missing any pigs? Where are you? Old Cheney? My pigs couldn’t go that far! That’s too far for my pigs!)

Oh-kay. So I called Bea. 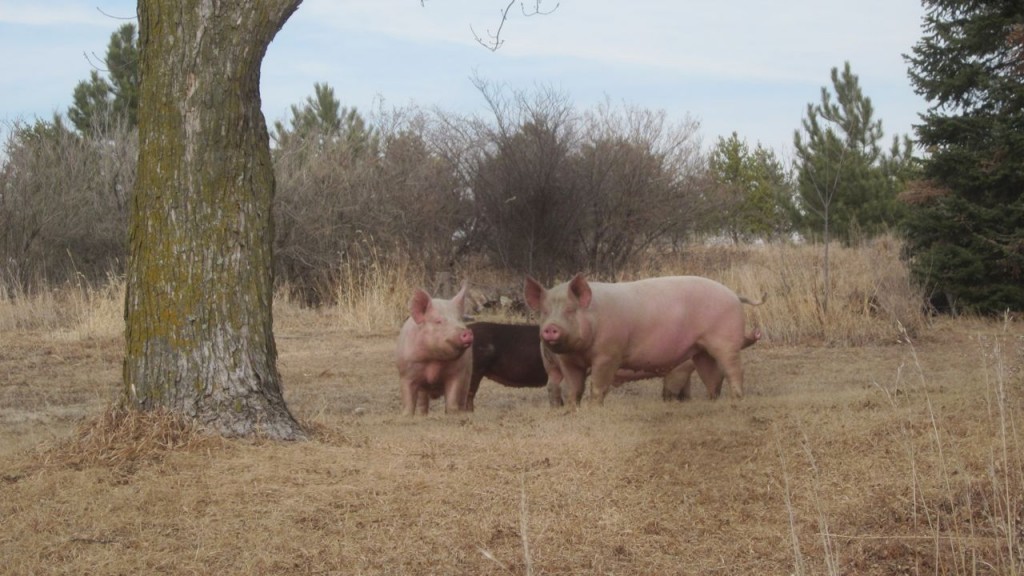 By this time, the pigs were rooting in the dirt in the back yard, quite lustily, at that. I wondered, idly, about truffles. I called Bea to me, all the while maintaining a safe distance from the pigs. Ready for the show. Where would she take them, I wondered. To the north, through the windbreak, or to the west, across to the creek? Time would tell.

Do you want to guess where she took them? I’ll tell you. She took them nowhere. Those pigs weren’t bothered in the slightest by the cheeky little dog, yapping and nipping and growling at their heels. None of them so much as took a single step to the north or the west. In fact, Bea looked very small, indeed, next to those large ladies. I glanced at my watch. I saw the loaders and haulers heading back down the driveway. Little Mack went with them, so it was just me, Bea, and the pigs. Won-der-ful.

I stood there looking at those pigs. I thought, briefly, about bacon, fresh sausage, and ham steaks. I encouraged Bea not to give up, and then after a few more minutes, we gave up. I went in the house, once again calling Farmer C, who still didn’t answer his ‘phone, and then I loaded up what I needed to, and headed in to the high school, leaving the pigs rooting in my back yard. Maybe, after all, they’d get tired of foraging at our place and head for home. Wherever that was.

About a half-hour later, Timothy and I came back to fetch another load, and this time the pigs had worked their way into the chicken yard and were cleaning up after the chickens. My chickens were upset, squawking and cock-a-doodle-dooing all over the place.

I’m sure you know me well enough, Gentle Reader, to know that this meant war. Nobody messes with my blueberry bushes, my orchard trees, OR my flock of hens, and gets away with it. Even a combined ton or so of grouchy pig flesh. Timothy growled a bit, grabbed a pitchfork, and I let both dogs out this time. I knew that Bea would be much braver and more fierce with Ollie at her side. For my own amusement, I watched them for a few minutes, and it did appear that the pigs, at least, were noticing the existence of the three, although they weren’t moving yet. Loathe to miss the show, still I forced myself to drag back into the house to gather up the dozen or more things Bryan needed, and left the Terrible Trio to do their magic. I hoped.

In ten minutes or so, Timothy came in, muddy, grinning, all the world looking as if “This is what I was made to do!” Who knew. He had the same satisfied look on his face that Bea did. “It appears that I have a knack for herding pigs,” he said happily, grabbing a rag to clean the mud off his feet (yes, they were bare) and hands. What a guy. Classical musician, web coder and designer, pig herder. That’s my kid.

We didn’t see the pigs again through the afternoon, though I did read this post by Ben Hewitt about butchering pigs and making sausage, which I admired very much, and I talked at length with my friend Anne (of the Back-to Eden gardening experience) about their recent and very satisfying (fresh bacon is a very satisfying thing) stint of being pig raisers and butcherers, and what with all three of these piggy events converging on the very same day, I was convinced of one thing: I think this year will be the Year of the Homestead Hog here at our place.

Don’t whisper a word of it to Bryan, though. I haven’t told him yet. 🙂

Oh! I’m sharing this post over at The Prairie Homestead’s weekly Barn Hop. Come on over and join me!