It seemed like a dull, straight-forward job I handed to my son Timothy yesterday.  I was, after all, thinking of him, as is not unusual.  He spends lots of time toiling over computers.  What better antidote to all that inactivity, than plenty of digging?

Dig a couple of new trenches for the asparagus roots–the entire width of the garden, at least 8″ deep, and about a foot wide.  Those were my instructions. And I think Timothy was a bit bored with this job, although at least he had (doubtless) the comfort of knowing that he was getting a good workout, at least.  Your men need muscles, you know, and what more satisfying way to build these muscles than to ensure future nutritious meals?  Think asparagus frittata, asparagus sauteed with garlic, roasted and drizzled with olive oil, oh, the lovely things you can do with a handful of fresh asparagus!

All these delightful things can be done with store-bought asparagus, too, Gentle Reader, although of course there’s a satisfaction from growing your own that can’t be bought.  But you already know that I’m a nut in this area of growing your own food, right?

So anyway, Timothy was toiling away at this rather boring chore.  Then the bees swarmed, and the dull part of the morning was over just–like–that. 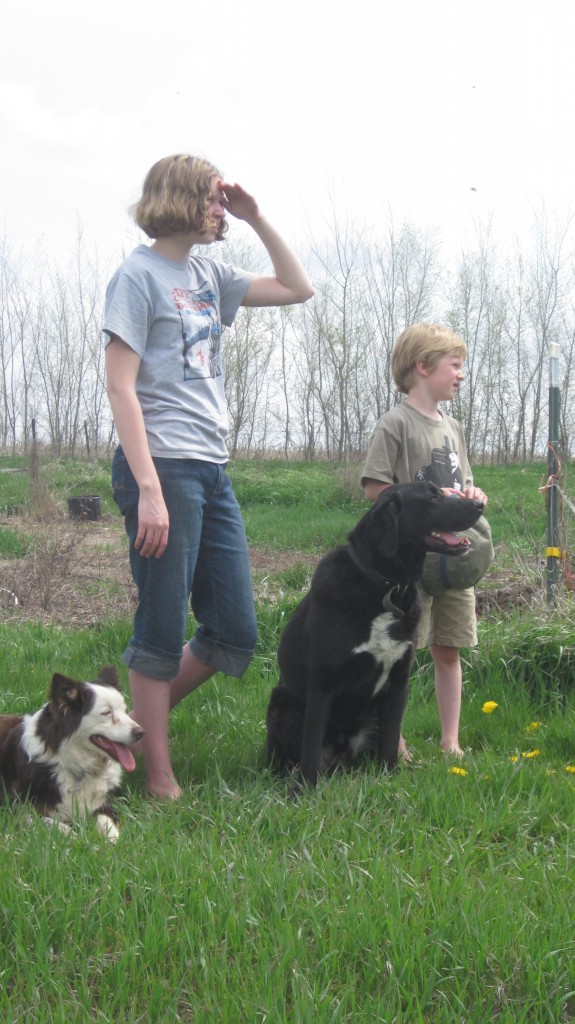 All action stopped as the bee swarming drama unfolded. Here Bea, Amalia, Ollie and Malachi stop to watch, at a safe distance, natch.

Before I tell you the bee-swarming story, though, I want to write a bit about asparagus, which is a lovely, easy-to-grow perennial vegetable grown for its delicious young shoots, as you undoubtedly already know. One of the very first vegetables to poke out of the garden (right behind rhubarb stalks and spring onions here in Nebraska) it is a joyous day indeed, when one can pick enough fresh young shoots for an asparagus frittata.

I have a few asparagus plants in my garden, but only a few, and I’m wanting a large patch that will feed the fam for several weeks every spring.

It must be noted here, however, in an effort to fully disclose the truth (from time to time), that the very first shoots go straight into the gardener’s mouth, raw and sweet and delicious, as, perhaps, they should. These shoots are packed with B vitamins, vitamin C, calcium, and iron, all nutrients desperately needed by your average gardener, and are delicious, to boot.  Fresh-picked spears are far more tender and tasty than store-bought ones, but of course you knew that already, didn’t you?  And the thing is, though the planting is a bit labor-intensive, not to mention perhaps a little dull, the growing of asparagus is easy-peasy, and once you’ve established a decent asparagus bed, you’ll have it for at least 20 years or more. That’s a lotta asparagus, you know.

So are you ready to plant a few roots?  First things, first. Then I’ll get to the bees swarming story, and it’ll be worth the wait, I promise. 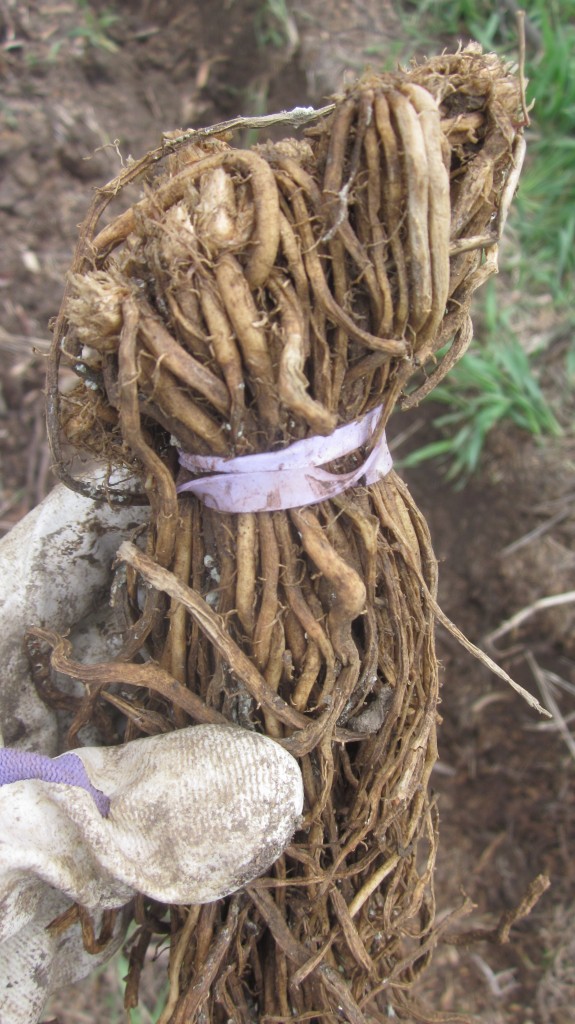 Here’s how to plant asparagus roots in just a few simple steps: 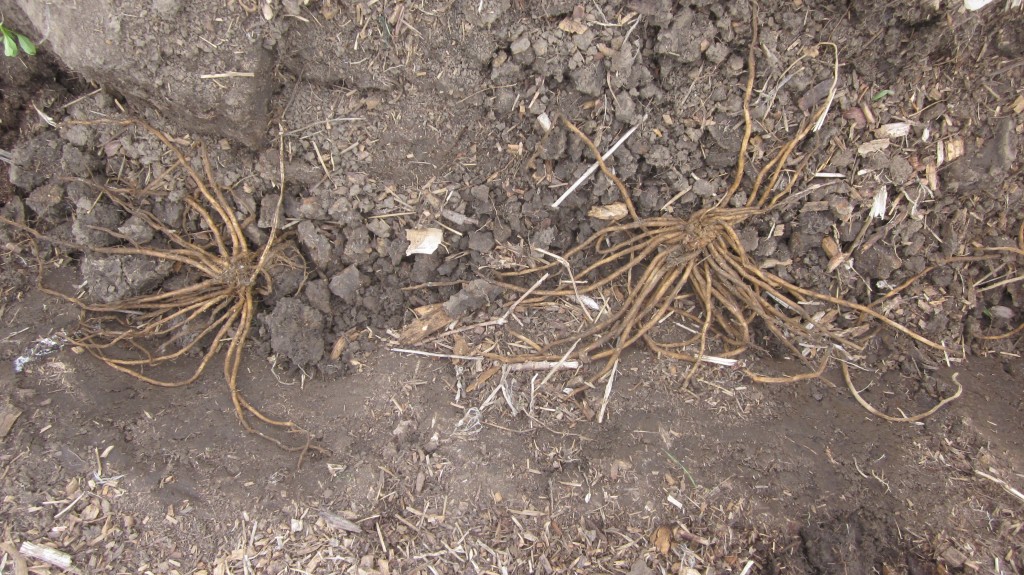 Here you can see the roots positioned properly in their trench.  They really do look like spiders, don’t they?

Asparagus thrives in nearly every area that has winter ground freezes or dry seasons. The mild, wet regions of Florida and the Gulf Coast are about the only places where it’s difficult to grow, apparently.  So what are you waiting for, Gentle Reader?  You should be able to buy asparagus roots from nearly any seed catalog that also sells plants, or at your local garden center.  Or from me at our farmer’s market in a few weeks, by the way.  As usual, I bought too many roots, so I’ll sell the extra to a few folks at market.

Now here’s what happened with the bees.

Timothy is a dutiful son and I’m very very thankful for him and his strong back and his stoic manner and his muscular arms.  I hope he reads this so I can enjoy his blushing.  He was digging the asparagus trench as I had asked him to, and I was on my knees planting strawberry plants. Then I heard his voice next to me.

“Dad’s bees are upset,” he said quietly.  This turned out to be a wildly understated observation.  Our three bee hives (although only one of them is inhabited) are located at the far end of my rather impressive garden space.  Timothy was digging the asparagus trenches relatively close to them.  They’ve given him problems before, actually chasing him to the house on occasion (so he says, anyway) and causing him to give up on a garden task from time to time. I think, personally, that they probably just like his after-shave or his enigmatical manner, or something.  They don’t bother the rest of us.

I actually fancy my hypothesis that there are days when Timothy just wants a few hours off from garden toil, and he knows he’ll get them if he runs wildly to the house, swatting about his face and fending off imaginary bees.  Whatever. 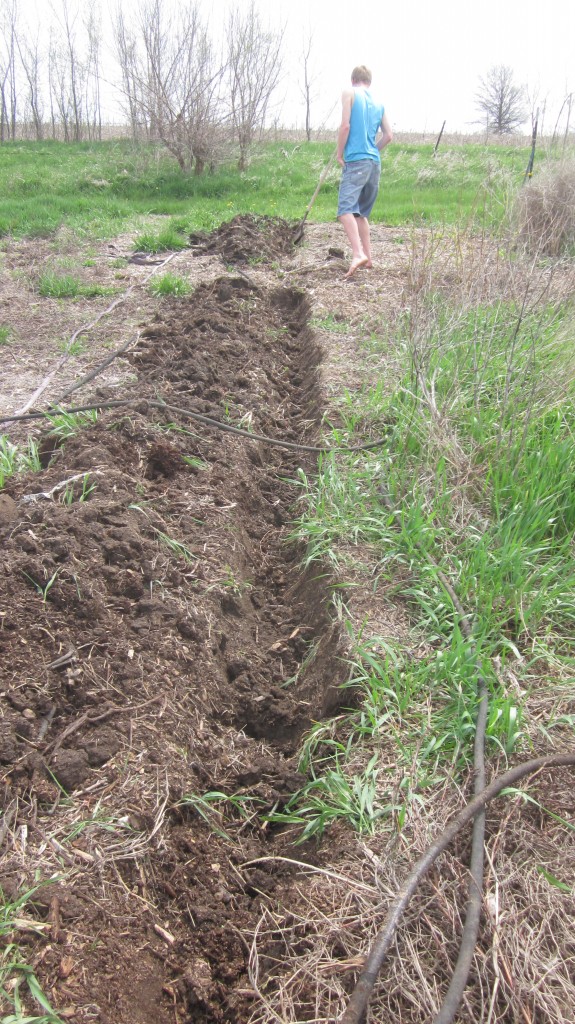 I looked up and I saw them.  How many bees reside in a typical bee hive?  20,000?  Half a million? I don’t know, but nearly all of them appeared to be in the air, doing loop-de-loops and elegant flying formations in the air, and meanwhile making a frightful racket of buzzing. Bzzzz . . . . bzzzzz . . .bzzzzzz.  There was a cloud of upset bees hovering in the air not far from the hives.

I’m not the bee expert at our house, but I knew that something was not right with the bees, just the same.  Timothy, also, has powers of acute observation in this sense, and he went to the house to alert our bee expert, my good husband Bryan.  I was heartily thankful that he was actually home this morning.  I watched the swarm of bees move from right in front of their hive, to a Scotch pine tree not far away.  Bryan came charging out in his full bee-keeping regalia, and walked to the site of the upset bees.  It was a proud moment for all of us. 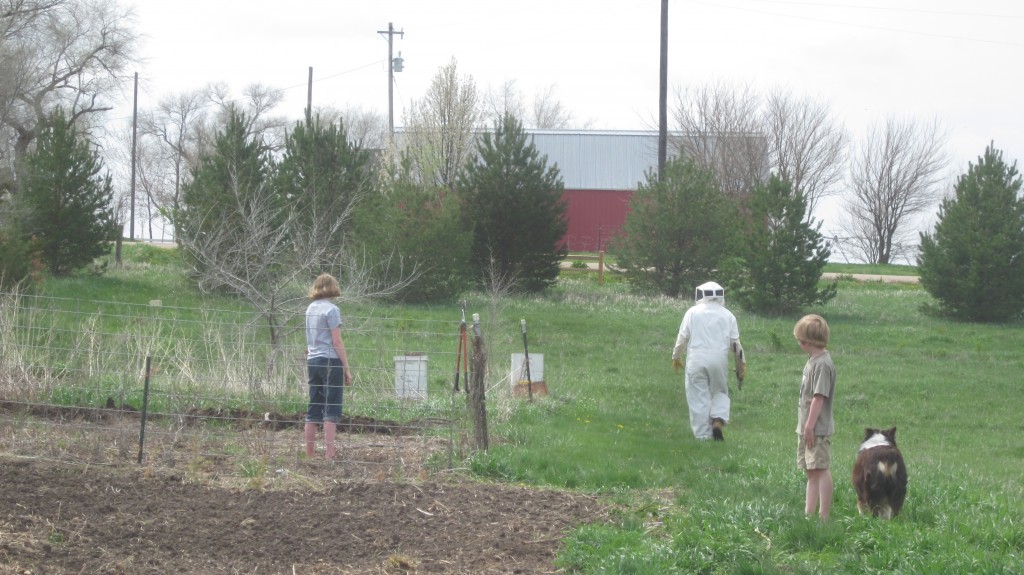 Here all action on the farm stops as Bryan hurries out in his bee-keeping suit.  I wish you could see the huge swarm of bees in the air, but I couldn’t get close enough to photograph them.

A large number of bees had, by that time, settled in a large, buzzing clump in a nearby tree, presumably clustering on their queen.  Little Mack went flying to the garage for a tree lopper, which Bryan used to prune the tree a bit, lopping off the branches with swarms attached.  He then carried the clumps of bees back to the hive, one by one, and put them back where they were supposed to be. 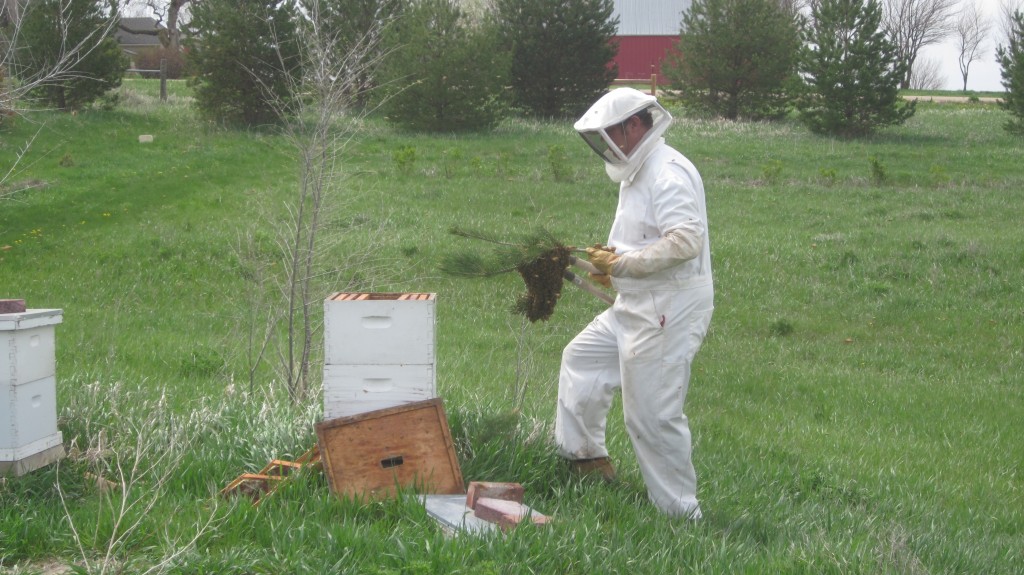 Here Bryan prepares to drop one of several clumps of bees into the hive.  He has removed a few frames from the hive to make space.

I was actually hoping that Bryan would put them on his chin for a quick, impromptu bee-beard photo shoot, but no.

I guess that swarming (especially in the spring) is not an unusual thing to occur in an established hive. And, according to old bee-keepers I’ve heard talk about it (i.e. my dad) if a hive of bees is bound and determined to swarm, they’ll do it, no matter what your feelings on the matter are.  Bees swarm as a means of reproducing the hive, but often leave behind an unexperienced queen and a weakened hive for the summer.

Today’s bee-keepers tend to actively manage their hives, and there are things that can be done to discourage swarming.  In the days of “laissez-faire” beekeeping, the practice of capturing swarms to replenish colonies made early swarms especially valuable.

Here’s an Old English poem I ran across about this:

“A swarm of bees in May is worth a load of hay;

I’m pretty sure I’ve heard my dad quote this little poem, at least once.

After Bryan had settled the bees back into their hive, the excitement over, we settled back into our gardening chores and he went off to work.  I noticed later in the day that the bees were clustered on a second, uninhabited hive, so I’m anxious to go out today to see what they’re up to now.  I hope they just moved into the splendid digs next door (that empty hive) and we’ll have two hives of bees once more. With all the honey bee problems in the U.S., I am mortally afraid of losing them entirely.

We value the good raw honey that these hard-working little ladies make for us, and the lovely job they do of pollinating all of our plants and flowers, so much, that I’m hoping that they’ve decided not to take off for a more picturesque locale.  Like, New Zealand, where (incidentally) they don’t allow the growing of GMO crops and they have healthy honey bees.

So you see that a morning spent digging an asparagus trench need not be as dull as one might imagine it to be . . . perhaps you ought to dig a few roots into your garden space.

28 thoughts on “Planting Asparagus need not be dull: when the bees swarm”