There’s a ballroom on Highway 6, just west of Lincoln.  It’s a rather unassuming-looking place, and we drive past it every time we take Hwy 6 home from “the city.” I’ve always felt a mild curiosity about this place when I passed by.  I love to dance, though I rarely get to do more than a few twirls in the kitchen with the kids.  There’s a signboard out front and they advertise various groups that play there:  “Bobby Layne and his orchestra” or the “Sandy Creek Band.”

Timothy and Amalia went to the Pla-Mor for “Big Band Night” with their friends last month, and they came home grinning and assured me that I really, really needed to go with them the next time it rolled around.  It rolled around again this week.  So I put on my dancing shoes and tagged along with my kiddos.  My mom, who is as crazy about any kind of music and dance combination as I am, tagged along with me.  So three generations of us went dancing together at the Pla-Mor.

I haven’t had that much fun in a long, long time.

I do pack as much fun into my life as I possibly can, around all the chores and responsibilities and meals and laundry and chicken poop and mulch and whatnot . . . just saying I don’t just sit and watch t.v. all day long, you know.

But this was serious fun, Gentle Readers.

The musicians–it was the Bobby Layne Orchestra–were already playing and older couples were already swaying together out on the dance floor, as my mom and my kids and I found seats and took in the sights around us.  The kids chatted with a dozen of their friends who were already there and very happy to see each other.The Pla-Mor is an elegant ballroom with low lighting, fancy tables and chairs with linen tablecloths and booths at the back.  And a disco ball flashing lights all over the place. Pitchers of ice water are available on the bar, though if you want something bubbly, you can get that, too.

Jerry, an older man with a big grin and thick glasses, made a beeline to me and asked me if I was the teacher of all the kids.  I was a bit taken aback, but I admitted that yes, I guess I was (though I wasn’t there in a teacher-capacity!), since nearly all the kids in the group were my drama students.  He sat down and introduced himself to me, and offered to get together with our group any time to teach us what he knew about many decades of dancing.  He gave me his card. “Dancing is dying out,” he said soberly, gesturing toward the couples on the dance floor. Most of them were probably in their seventies and eighties.  “I’d love to teach you all everything I know–free of charge!–just to make sure that swing dancing won’t die out in this area!”

I promised that I’d talk to the kids about this, and then Jerry pulled me up and gave me a ten-minute lesson on basic (very basic!) swing dancing.  He taught me the basic steps of the Lindy Hop, a dance step that started in the 20s and 30s, he said, and from which nearly all swing dance steps have grown.

There is some controversy on where the name “Lindy Hop” originated, although since the timing of this new dance coincided with Charles Lindbergh’s transatlantic airplane flight, completed in 1927, the dance came to be associated with the aviator and this historic event.  Lindbergh’s nickname was “Lindy,” after all.  Whether or not the name of the dance had anything to do with this historic event is up for question, but the association stuck.

But back to the Pla-Mor.  The musicians started playing a new song, and Jerry grinned at me.  “Want to go try it?” he said, holding out a hand to me.  I grinned.  “I really don’t know how!” I admitted.  “Don’t worry, it’s easy,” he said, and he led me out on the floor.

It was easy, for the most part, and Jerry taught me several swing steps.  We both grinned the entire time; we never did run into any other couples (though we were close a time or two) and I didn’t trod on his feet more than once or twice.  It was delightful, and I am, heretofore, hooked on swing dancing. 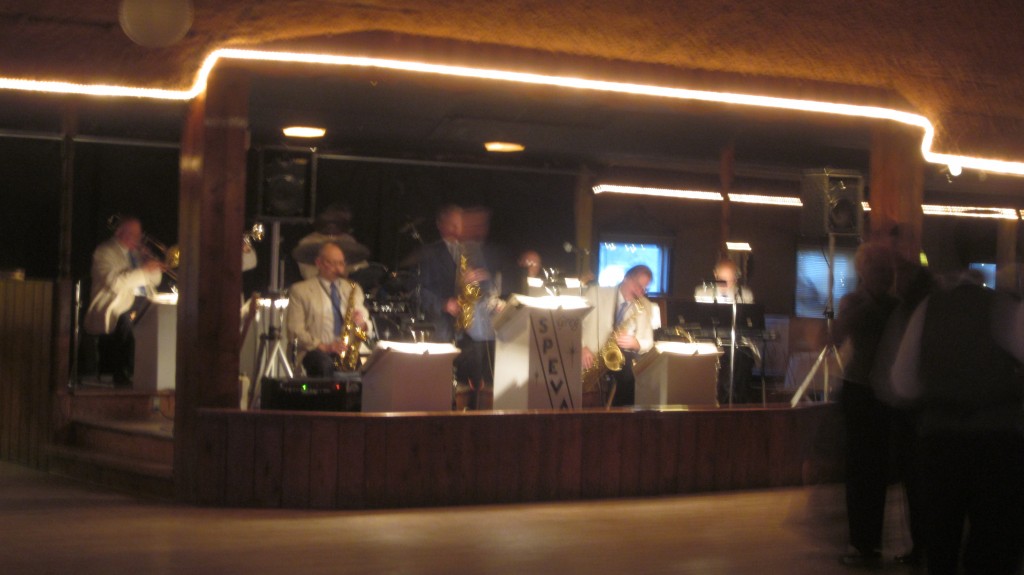 Here are the musicians on their stage, Bobby Layne and his Orchestra.

Now is the point in this post where I have to apologize for these pictures. I only had my little pocket-camera with me, and the lights were dim.  But you can at least see a little of how it looked and get the feeling for the old-fashioned loveliness of this ballroom. 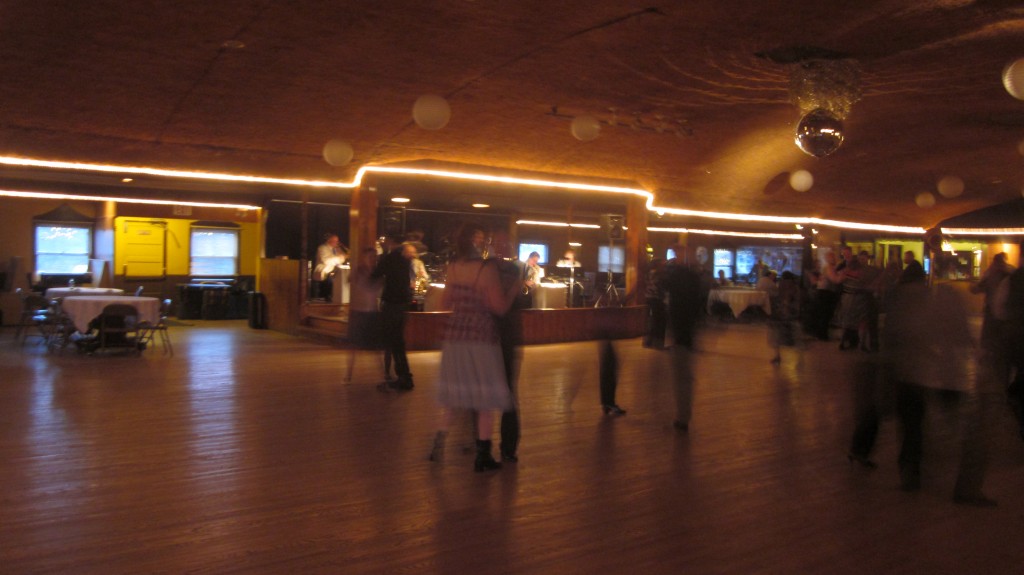 Smiling couples danced past me. Can’t you just hear the music here, and the “whiff,whiff,whiff” of the shoes brushing the polished floor?

We got at the Pla-Mor at 7:00 and I didn’t look up to the clock until 9:45.  The evening went so fast!  I ran into some old friends and got re-acquainted with them, and enjoyed watching the kids make up new dances and the old folks happily dancing the night away.  I practiced waltzing with a friend, and I learned the polka. 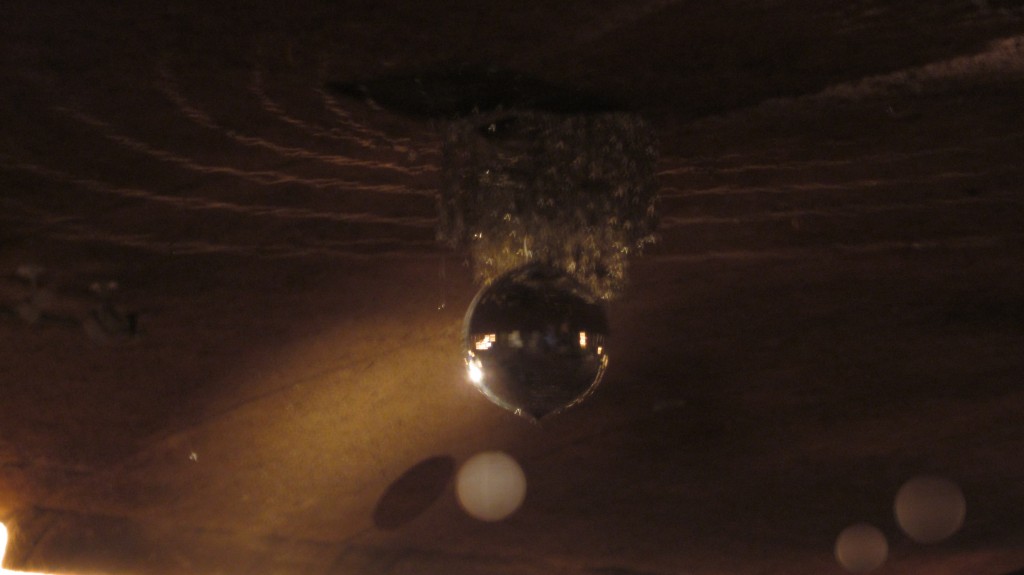 This glittering, flashing ball made tiny lights dance on the ceiling: magical!

I’ll definitely be putting on my dancing shoes next month on Big Band Night and heading to the Pla-Mor with the kids.  It’s just too much fun to miss!

Is there a ballroom in your area that offers an evening of Big Band Music with swing-dancing, too?  Swing dancing nearly died out, apparently, but has enjoyed a resurgence in popularity in the past couple of decades. It’s good wholesome fun, and I would encourage you to check it out in your area!  You may become hooked, too!

Here’s a video I found of a couple, Max Pitruzzella and Annie Trudeau, taking the Lindy Hop to the next level in competition at the International Lindy Hop Championships.  Wow! It’s really fun to watch!