I planted quite a large patch of radishes in my garden early this spring, with dreams of eating as many radishes as I could possibly hold–of course!–but also on selling bunches at our first Farmer’s Market in May, at which time the radishes would hopefully be at that perfect point of readiness.  Crisp and sweet and juicy and with just that perfect hint of sharpness.  Yum.

And everything went just as planned, for once, radish-wise.

I pampered those radishes, weeding and watering and thinning and uttering words of encouragement to their little radish ears.  They developed in a lovely manner at the right time and they were just at that perfect point of readiness for our first Farmer’s Market, as I had hoped.  I pulled heaps of them and bunched and cleaned and polished them, and they lay gleaming shyly from the cooler on the day of our first market.

I love it when a plan comes together so well, don’t you?

I knew they wouldn’t be so good the next week–radishes don’t stay at that perfect point for more than a few days, before they get woody and bitter and only worthy of being thrown to the chickens, as you probably know.

Yes, my plan went just perfectly. This doesn’t happen very often, Gentle Readers, by the way. So often something goes awry, does it not?  But I hadn’t planned on that dumb tornado ruining everything. 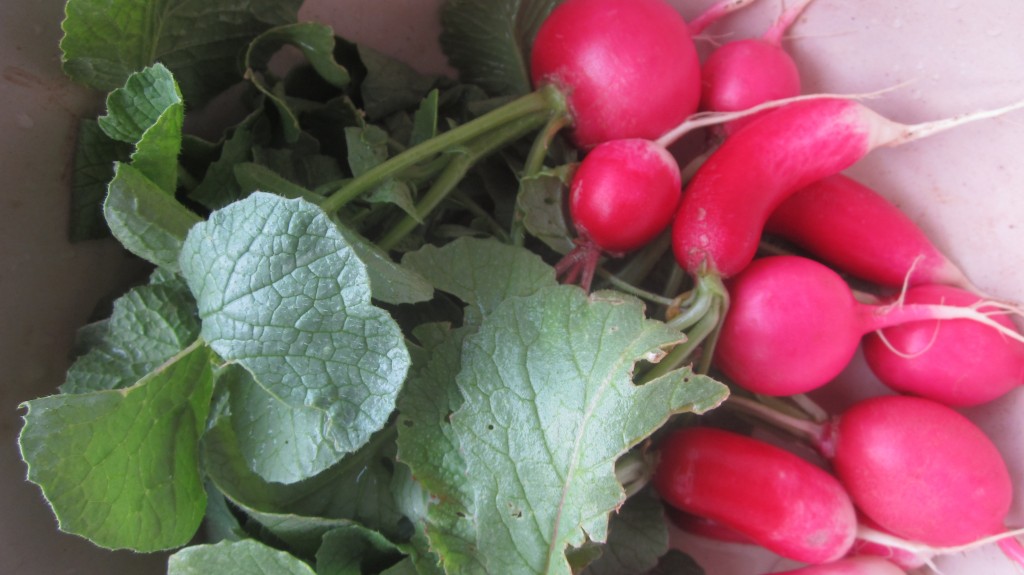 Look at these! SO beautiful!

Tornadoes so often do, you know. Ruin everything.

It was the first night of market. We had our wares laid out nicely on our tables (including the heaps of gorgeous radishes) but (as we so often are) we were a bit nervous about the weather.  There was a 60% chance, according to weather websites, of storms that afternoon. So the weather could go either way.  40% our way.  We knew one thing 100%–if we had decided to stay home, the sun would have come out and the birds would have sung merrily and the weatherman would have laughed “I goofed!” and we would have felt very foolish, indeed.

I don’t have a smart phone, by the way.  I don’t think I’m smart enough to own one, and I actually lost my non-smart phone, so all we could do was to question passers-by, who all were scurrying past and studying their smart phones. It went something like this:

Me:  “Is the storm coming this way, can you tell me, please?”

Passing gentleman: “Naw–it looks like it’s going to miss us.  It’s all going to go north of here, as usual. You’re gonna be fine, just fine.  No worries.”

(Five minutes later) Me:  “Could you tell me, please, what the current radar looks like?”

Distracted Woman: “Sure–oh my!–we’re in a tornado watch and it looks like it’s heading straight for us. I’m going home to my basement! You’d better run, too!”

(Two minutes later) Me:  “Excuse me, ma’am, but what’s the current weather situation?”

Windblown woman, dragging two children:  “Ah–let’s see–hmm . . . you might have fifteen minutes before it hits. Then–tornadoes, hail, wind, torrential rains, pretty much you’ve had it at that point.”

So we did a rapid and frenzied business for  twenty minutes or so, with smart-phone-studying customers, and then everybody abruptly started diving into their cars, with one eye on the quickly darkening sky, and one eye on their collective smart phones. Everybody but us, that is.

Since a few people were still grabbing things from our tables and pushing cash in our direction, we stayed put, for the moment.

And then a kind gentleman parked his car in a spot near us, jumped out and strode toward us nervously.  “Just thought you folks should know . . . . we’ve sent the storm spotters out, and we’re in a tornado warning,” he said solemnly.  “There’s a tornado on the ground about thirty miles away and it’s heading this way.  I thought I’d tell you, since ya’all look like the clueless sort who don’t own smart phones.”

Hmph. (He didn’t really say that last part, but I could tell that he was thinking it.  Clearly.)

That’s all we needed to hear.  We tossed the rest of our baked goods into the boxes and tossed them with the (yes) heaps of radishes into our vehicles in just minutes, only getting drenched thoroughly when the rain started to fall heavily. But we saved the pies.

Now this is why I use the word “only.”  As we all note here in the Midwest, nearly on a daily basis, it could have been so much worse.

After all, this tornado was headed our way.

But we made it out of there in one piece.  It was quite an adventure, one that I don’t want to repeat any time soon. Especially the part where Amalia and I, drenched to the proverbial bone, had to huddle between the Wal-Mart freezer sections for a half an hour because of the tornado warning and the lock-down of the store.  Everybody there had smart phones but us, of course, so all we could do for entertainment for the entire half an hour, besides laugh at each other’s blue lips and goosebumps and developing chilblains, was to review sign language terms that Amalia had learned. And to chuckle through our chattering teeth.

“We have no pie.”  Such handy phrases.

I had an escape plan all figured out, if the manager would have actually pushed us into the freezer section. I was going to run to the household department and rip open a few packages of blankets, first, and wrap several around us.  Then I was going to find me a cup of coffee.  Surely in that cavernous store there was a hot beverage.  I was so cold.

But that didn’t happen.  Eventually the smart-phone-wielding folks saw that the tornado warning had been cancelled and we all went our own, blue-lipped, soaked-to-the-skin and drowned-rat ways.

So what is the purpose of this tale, you might be wondering, and well that you should, Gentle Reader.  This is the point:  we had lots of radishes to carry home that night.  Heaps and piles of them, which we handed out willy-nilly to anybody who wanted them, and then still we had bunches to stick in the refrigerator when we got home.

And we’ve been eating radish sammages every day since.  I’m so happy that the kiddos enjoy these particular summertime delights as much as I do!  So–just in case you may be hankering for a new idea for what to do with the extra radishes in your refrigerator or garden, here’s a simple but perfect summer lunch idea for you. 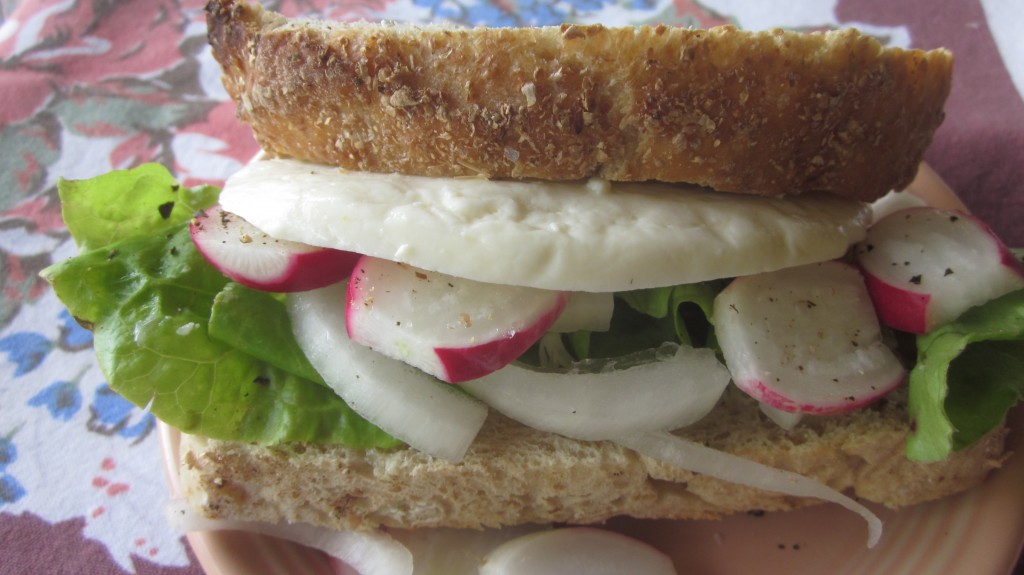 This is just as tasty and satisfying as it looks!

Ah, yes, the quintessential Radish Sammage! The very taste of summertime, between two slices of toasted bread.  Here’s how you make one for yourself!

Toast lightly two pieces of good bread, and spread just a skiff of butter on it while it’s hot, so it melts nicely. You could do something else here, like use a bit of mustard or a little bit of mayonnaise, but we prefer the butter with the radishes.

Layer on the bread, in any order you like (it’s a free country):  lettuce + sweet onion slices + radish slices + a slice of a soft cheese of your preference (we used queso fresco, which is lovely) + more lettuce.  Grind fresh pepper and salt (we like the pink Himalayan the best) all over the whole thing, and you’re done! Ta-daa! The perfect summer lunch, made in less than five minutes.

Try one today–or tomorrow, if you need to go pull (or buy) some radishes, first.  And then, let me know what you think!