My dad has been talking worms for weeks now.  That is, red worms, red wiggler worms, Eisenia fetida, to be precise.  It’s that time of year, you know, in the Midwest.  It’s February, and the days are getting longer.  Occasionally we’ll have a warm day or two which will tease us into thinking about spring (dreaming, actually) and then–wham! Blam! boom!–winter storm warning!  Snow, ice, drizzle, the abominable wind chill.  So we Midwesterners do what we can to make it through February.  Some folks go on cruises.  Some hibernate, bear-like.  Some set up red wiggler worm composting bins.  My dad–who shares my nerdy love of compost–ordered a box of red wiggler worms last week.  We are anxiously awaiting that call from the post office:  “Jim, please come get your worms.”

Since it has taken a little longer than we thought for the worms to come, I’ve been biding my time as I wait for them, cuddling up in the evenings next to the wood stove (burning as hot as is safe) with a cuppa steaming something at my tired-of-being-chilly elbow, and poring through seed catalogs and drawing up rudimentary garden plans.  And anxiously awaiting that shipment of red wiggler worms. 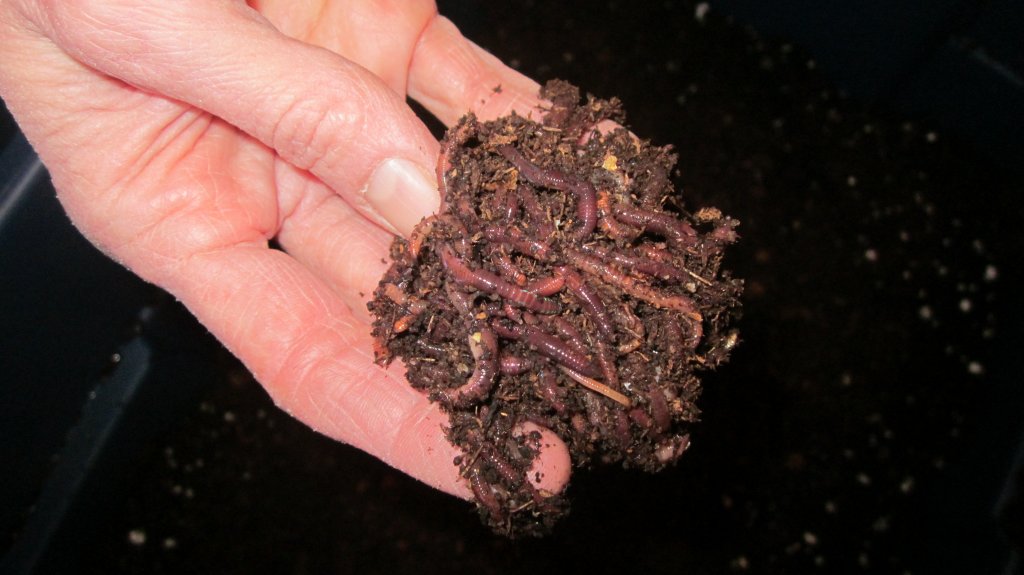 Here’s a handful of the little fellers, fresh from the shipping box.

A few facts about the Eisenia fetida: it is a species of earthworm introduced all over the world (except for Antarctica) from Europe, especially adapted to decaying organic material.  These critters thrive in rotting vegetation, compost, and manure.  If you have a big pile of rotting leaves out in your yard some place, perhaps you’ve got Eisenia fetida wriggling away in there, making your pile of leaves into something rich and crumbly and beneficial to your garden or houseplants.

There are lots of great reasons, if you are a gardener, to add a few red wiggler worms to your gardening arsenal.  Here are just a few:

1.  They’ll make some prime compost for your garden (or houseplants!) in just a few months.

The worms finally came.  I got that ‘phone call that I had been waiting for.

“Sis, our worms are here!  Come on over. Bring the kids–it can be their science lesson for the day.” I love it that my parents so enthusiastically support our home schooling efforts.  I asked Dad if I could take a few pictures for my blog and he gamely agreed, as long as I captured his good side.  Well, as you can see from the picture below, my dad looks great from any vantage point. 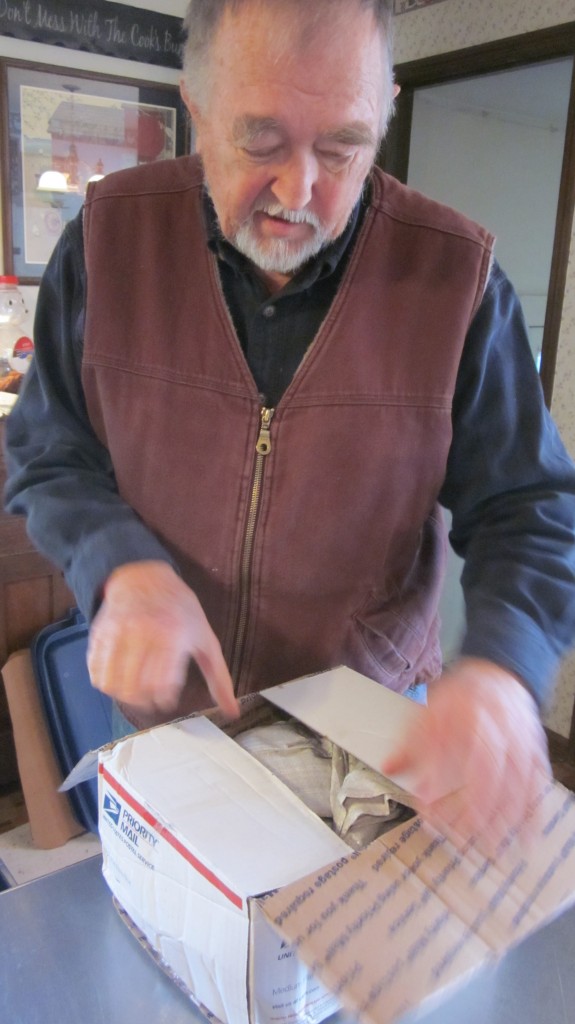 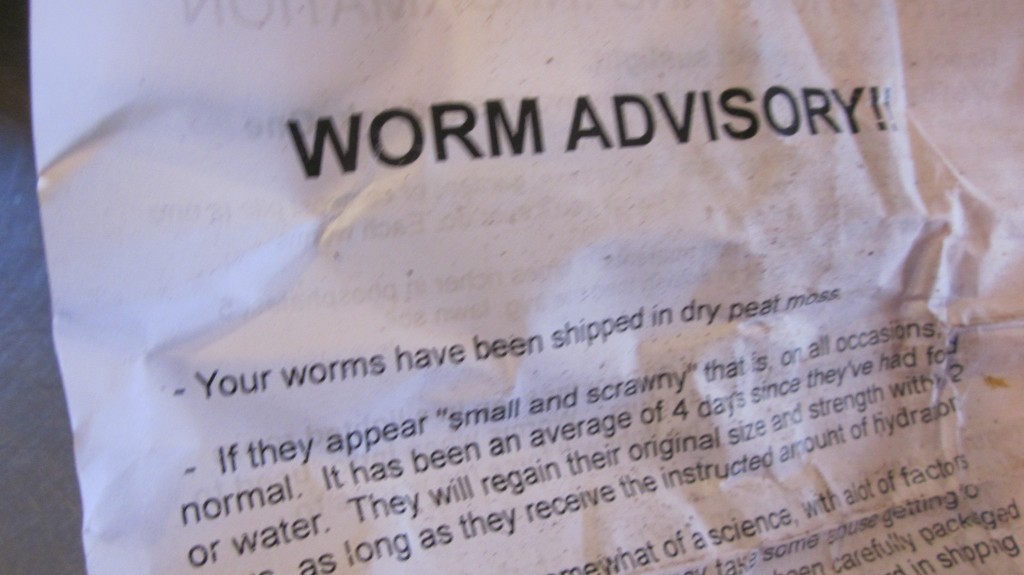 There were a few instructions to read, included with the shipment of worms.  The title “WORM ADVISORY!” seems a bit ominous. 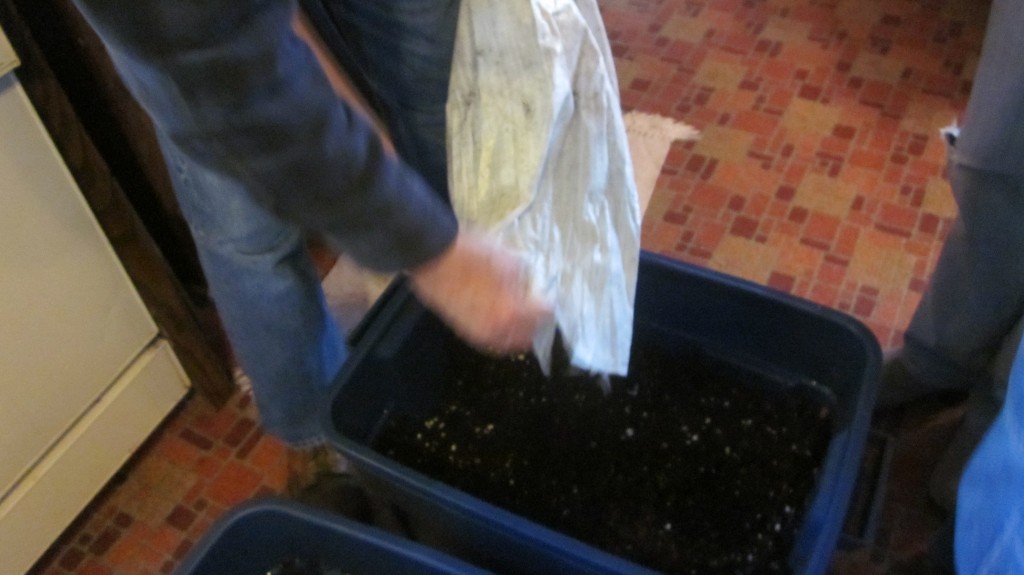 Dad divided the worms between our two bins, which he had previously filled about half-way with peat moss and potting soil mixture. 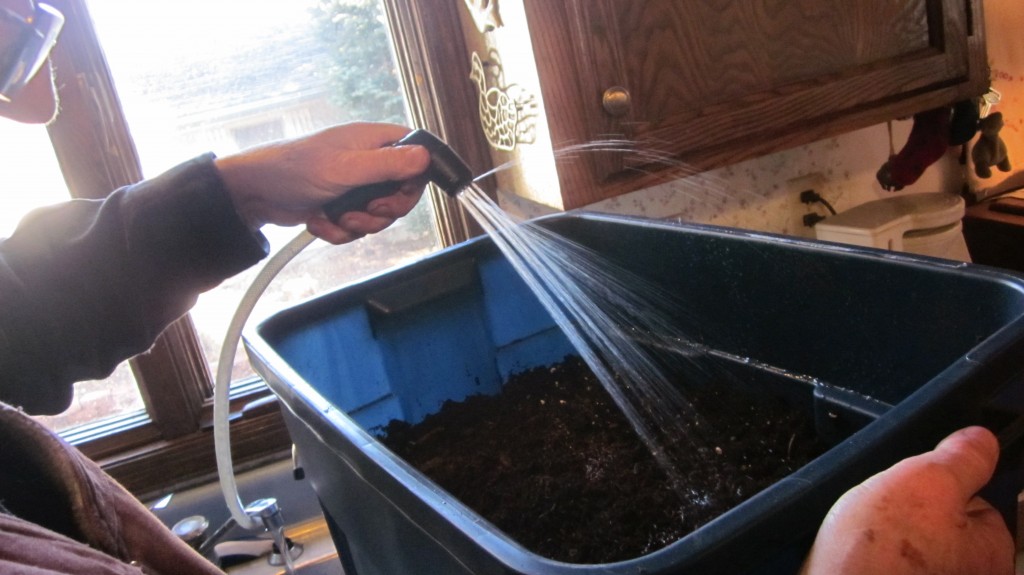 We added just a little water to the worms’ habitat, which was already moist. Don’t want to drown them! 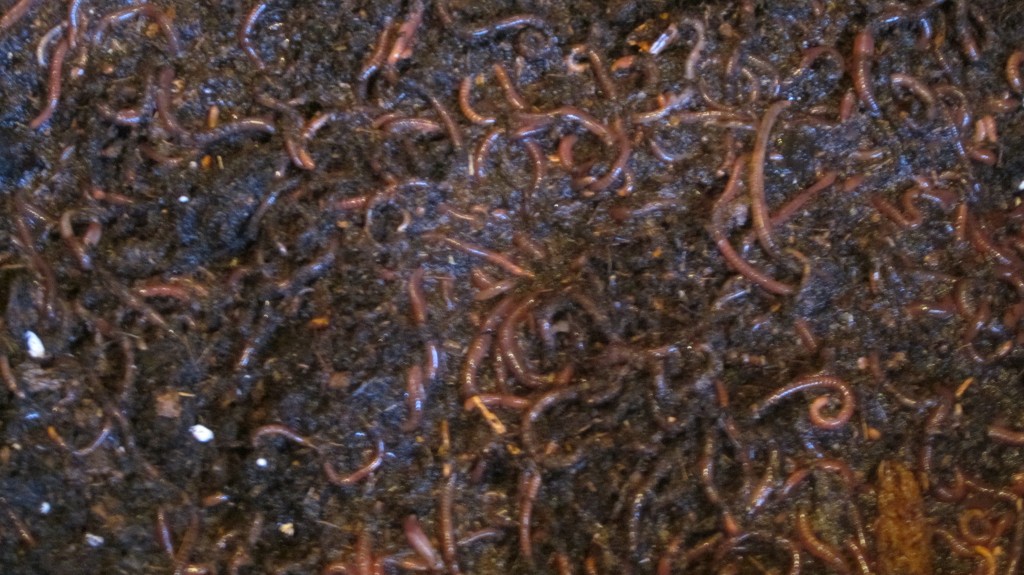 They look pretty happy to me–what do you think? 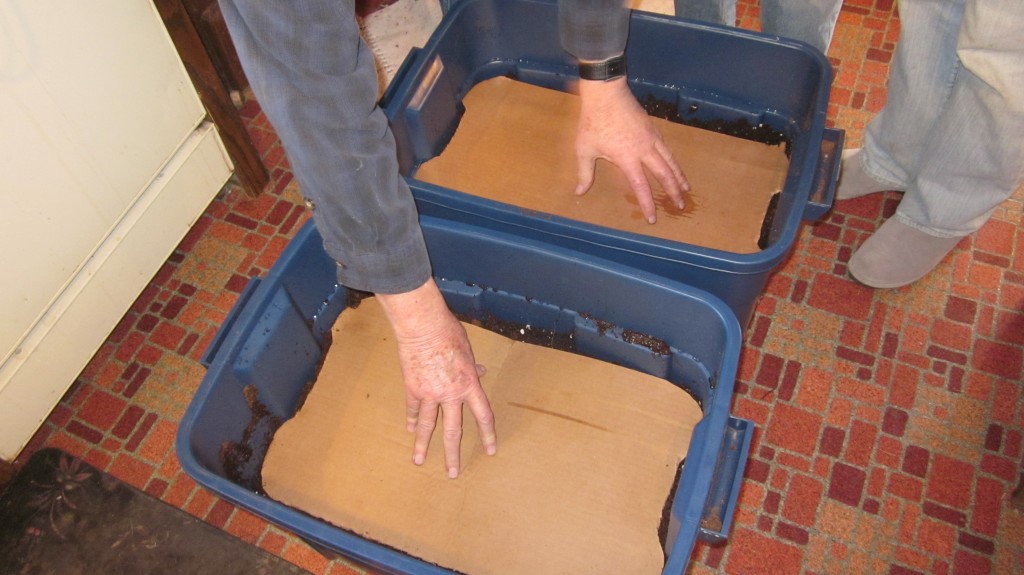 Then we placed sheets of cardboard on top of the worms, and then the bin lids.

This is a grand compost experiment for me.  My bin of worms now sits in our cool and dark basement, under the ping-pong table, if you’re interested.  The worms are not supposed to be fed for a few days, and then we’ll start feeding them every other day or so.

I am so excited!  If these little fellows are happy with their new home, we should not only have some prime compost in a few months, but also have plenty of red wigglers to share, since they apparently reproduce fairly rapidly.

Now that we have our worm habitats set up, we’ll have to find another garden-related project to keep us going . . . how many more days until spring?

Postscript:  I got busy with things at home and didn’t check on my new bin o’ worms until about eight hours later.  Not until little Mack passed through the kitchen about eight o’clock in the evening and said, matter-of-factly, “Your worms are escaping.”

My hands deep in dishwater, I turned to look at him.  “What are you talking about?”  I had just about forgotten about the worms.  “They are all over the basement floor–your new worms,” he said, as if this were to be expected and was no biggie.

I dried my hands and hurried down to the basement.  Sure enough, my beautiful worms were trying to flee their new home.  A few were on the basement floor, and others were, yes, wiggling in clumps along the sides of the bin.  I was a bit dismayed.  I lifted the bin lid.  You know those pictures of bee keepers who sport a swarm of bees on their faces, in a scary buzzing beard shape?  That’s what this looked like, except that it was my red wiggler worms in shiny clumps, all along the sides of the bin, and spilling out of the top. I found this image here, thanks to the Bee Beard Comopetition in Ontario for taking such great shots!

“They are not happy with their new home,” I observed, unnecessarily.  I scooped up the shiny clumps of discontented worms, and I put them back in their bin.  Then I hurried to access that wondrous global system of interconnected computer networks that
I tap again and again:  the internet.

What had we done wrong?  Obviously if my worms were happy, they wouldn’t be trying to move, en masse, to some place better.  Too dry?  Too wet?  Too cold?  Too hot?  What was it that they were so upset about?

I found a website that had troubleshooting tips, and the I applied them:  I added shredded newspaper, I added some kitchen scraps, and I fluffed the worms’ bedding.  Also I took the lid of the bin off.  And then I crossed my fingers.  I cannot deny that the vision of my adding to my long list of morning chores “Collect up all the worms off the basement floor” was not an attractive one.

But. As of this morning, my worms seem to be happy, or perhaps they’ve just decided that this is as good as it gets.  In any case, they are all still in their bin, and hopefully they’ll stay there.

I’ll keep you posted on our adventures with these new wiggler worms, and if you want to learn more, I found this website to be very helpful.  Now have a happy day, you!

12 thoughts on “Red worm composting sounds awesome, but . . . in my basement?”