My dad tells me about seeing an ad in the newspaper years ago, when we still lived in Nelson:  “Apple Cider Press for Sale.”  He immediately picked up the ‘phone and made a call to inquire about the press.  The man who was selling it lived in Davenport, a small town not far away.  Dad says that he asked how much the man was asking.

“I could just feel him pulling himself up to his full height, and puffing out his chest,” he tells, a grin on his face.

“I’ll be right over,” said my dad, and he dropped what he was doing and went to buy the apple cider press, which turned out to be in decent shape, although it was quite old.  It has been an integral part of our family’s lives ever since.  I remember every fall pulling that press out of the dusty depths of the garage, cleaning it up, and setting it up in our barn/garage, ready for apple cider season.  We squeezed apples that we were given, quartering them to cut the worms or mold out.  Word got around town really quickly that the Young’s had an apple cider press, and people started calling to ask if they could get in on the action.

I love it when Dad goes into story-telling mode.

That cider press is a very heavy and potentially dangerous piece of machinery.  Not anywhere close to being something OSHA would approve . . . there are at least three distinct areas on the machine that could maim, mutilate or seriously injure one who wasn’t paying strict attention to what they were doing . . . Dad wouldn’t lend it because of these factors, but he did offer to squeeze the cider:  for the payment of half the cider, or a dollar a bushel.  People jumped at the offer, and we had a little mini-business in our barn nearly every fall, with the payment usually being gallons of apple cider.  Dad says that one fall we squeezed nearly two-hundred gallons of cider.  We played lots of basketball during that time, with the neighborhood kids who would come by.

It was a fun time for us kids: the evenings were cool and dark, and we had lots of activity and lots of people coming and going, and we had fun.  I would imagine it was pretty much just lots of work for Mom and Dad.  And lots of apple cider for the freezer when it was over.

Sometimes folks would bring apples that were full of worms and they’d say to just squeeze them the way they were:  they didn’t mind “a little protein” in their cider.  Oh, and keep half the cider, they would say.  So we’d pull out paring knives and cut the worms out ourselves.  If we were keeping half the squeezings, we were going to make sure it was fit to drink.  No “extra protein” for us, thank you!

Our apple cider supply, frozen in plastic jugs in the basement chest freezer, lasted through the winter, usually.  I remember taking it to school every day in a thermos in my lunchbox.  Full of shards of ice, it was a refreshing and delicious drink that I was proud of.  Nobody else in town brought apple cider with their lunch.  I felt special.  Now and then I’d get a thermos full of apple cider that had begun to ferment:  it was the best!  Sparkling apple cider!  (If Mom would have known that I was carrying hard apple cider to school in my lunchbox, she would have been horrified.  I think.) 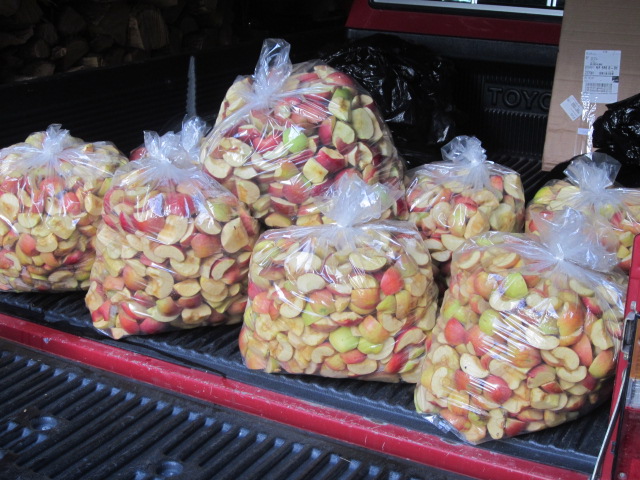 The first step in making apple cider is to clean and core the apples, removing any bad spots, mold, or worms. Unless you like “a little protein” in your drink.  Mom prepared all these bags of apples.  She never goes into any project half-way.

Mom has made friends with a gentleman in Seward who has quite an orchard in his backyard.  He has been selling the apples that are perfect, but he can’t stand to let the windfalls and imperfect ones go to waste.  Mom has stopped at his house time after time this fall to pick up bags of apples, at his request.  She has made apple pies for farmer’s market every week; she has given away bags of apples; she has brought me garbage bags of bruised and damaged apples for my chickens; and she has sat and cut up apples for cider until her fingers were pink and pruney.  When she deemed that she had enough apples ready to make it worth the time to make apple cider, she called us (for help with the grinding, and because I’d asked her to) and we dropped what we were doing to drive into town. 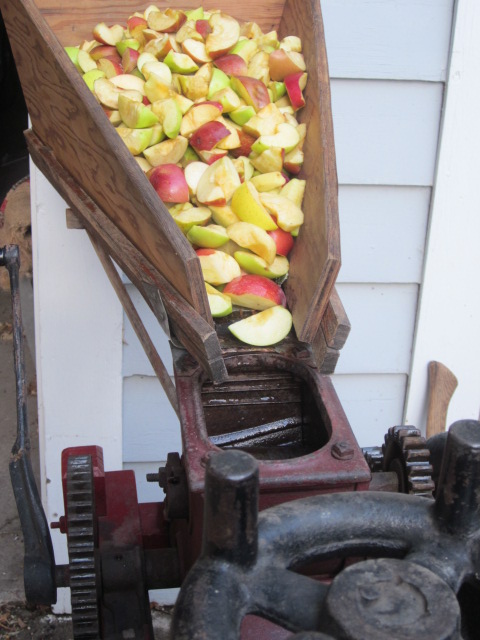 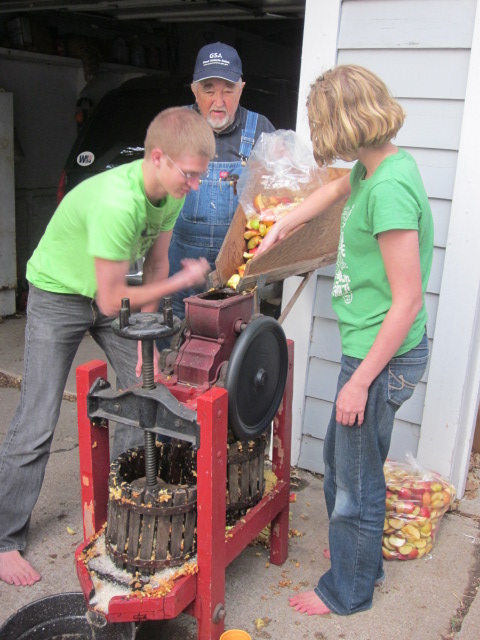 . . . one person (Timothy) grinds apples while another (Amalia) pushes the apples into the grinder, while another person (Grandpa) continually urges caution.  That grinder would grind up a finger just as easily as a bit of apple! 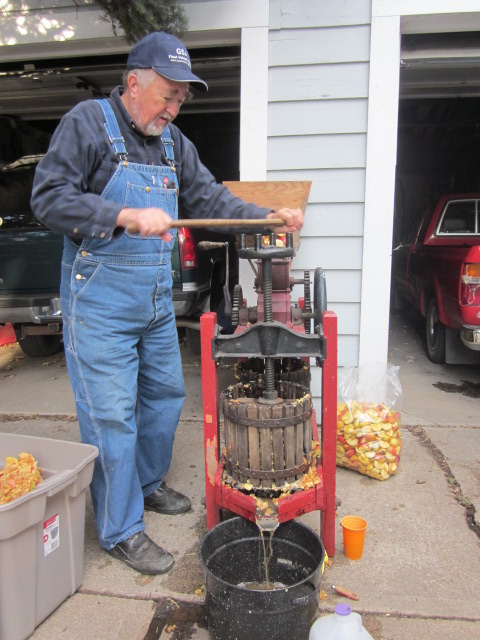 Once the first basket is full of ground-up apples, it is scooted to the front and pressed. Dad uses an old ax handle to work the press. Yum! The cider trickling into the pot is always a reason to rejoice . . . and to grab a cup for a taste. 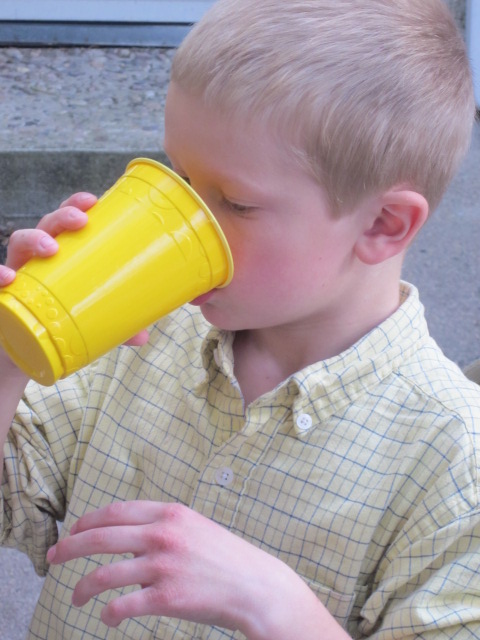 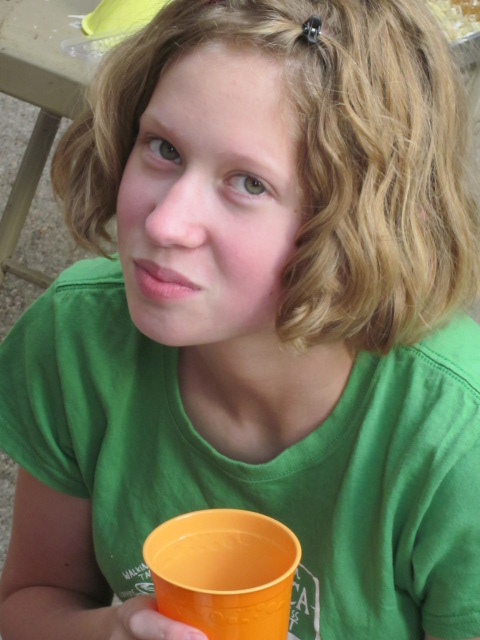 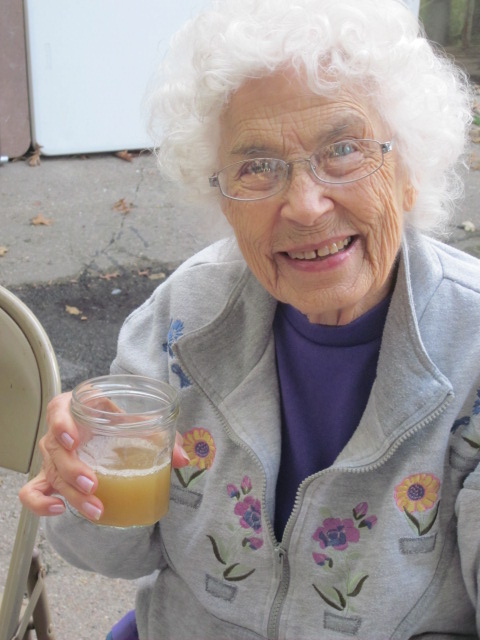 Mom and Dad’s neighbor Mary drops by for a taste. 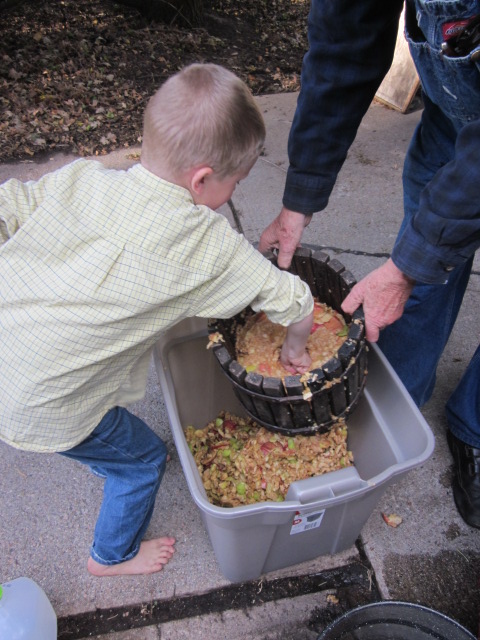 Once every bit of juice has dripped out, the first basket must be emptied into a bin, and the grinder will fill another basket. Brute force is needed! So little Mack offers his services. 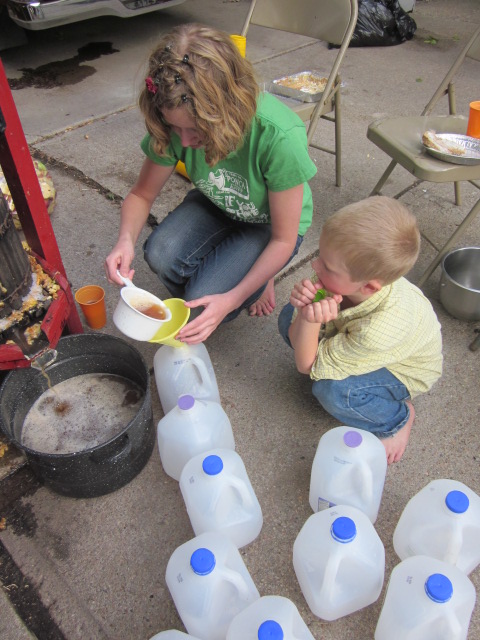 Amalia gets to work filling clean jugs with cider. 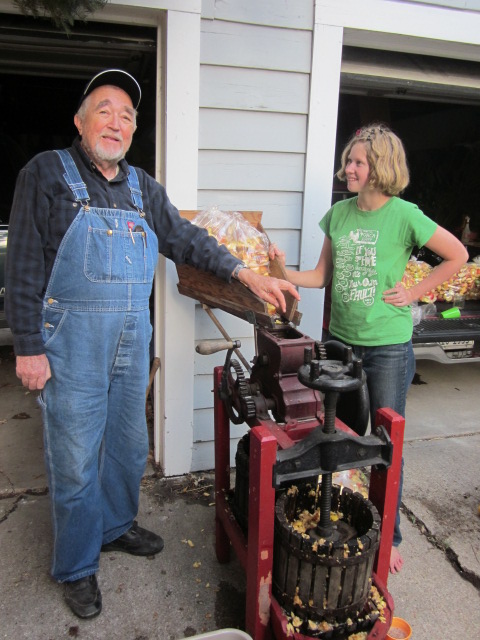 It’s always important to pace yourself at this task. Grind until your arm gets tired, and then take a break and get a sip of cider, and rest for a few moments with another story.  Sometimes Mom will make donuts for this event, and when she does we all periodically burst out into song.  We’re that happy. 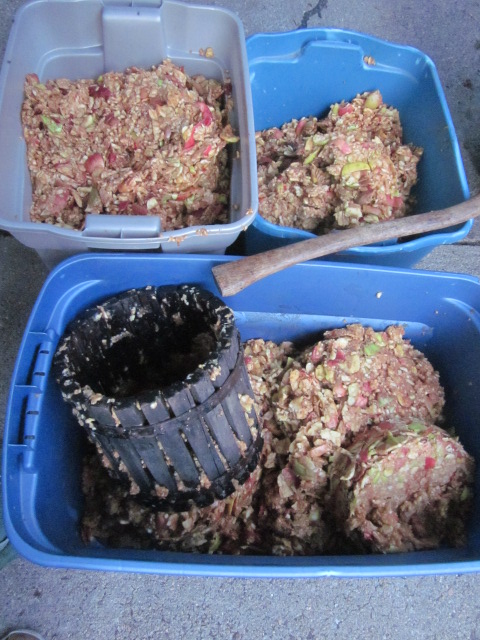 My chickens will get all the apple refuse in the morning for their breakfast. They will scratch and peck and nibble at it all day long. A couple hours of squeezing apples and this is what we’ve got to sock away in the freezer!

So that’s what an evening of squeezing apple cider is like at Mom and Dad’s house.  We took a couple gallons of the cider home, and one went into the freezer.  We’ll pull it out when the days of plentiful apples are just a memory, the snow lies deep on the ground, and a fresh cup of cider is just the antidote to the winter blues.  That, and possibly a homemade donut.