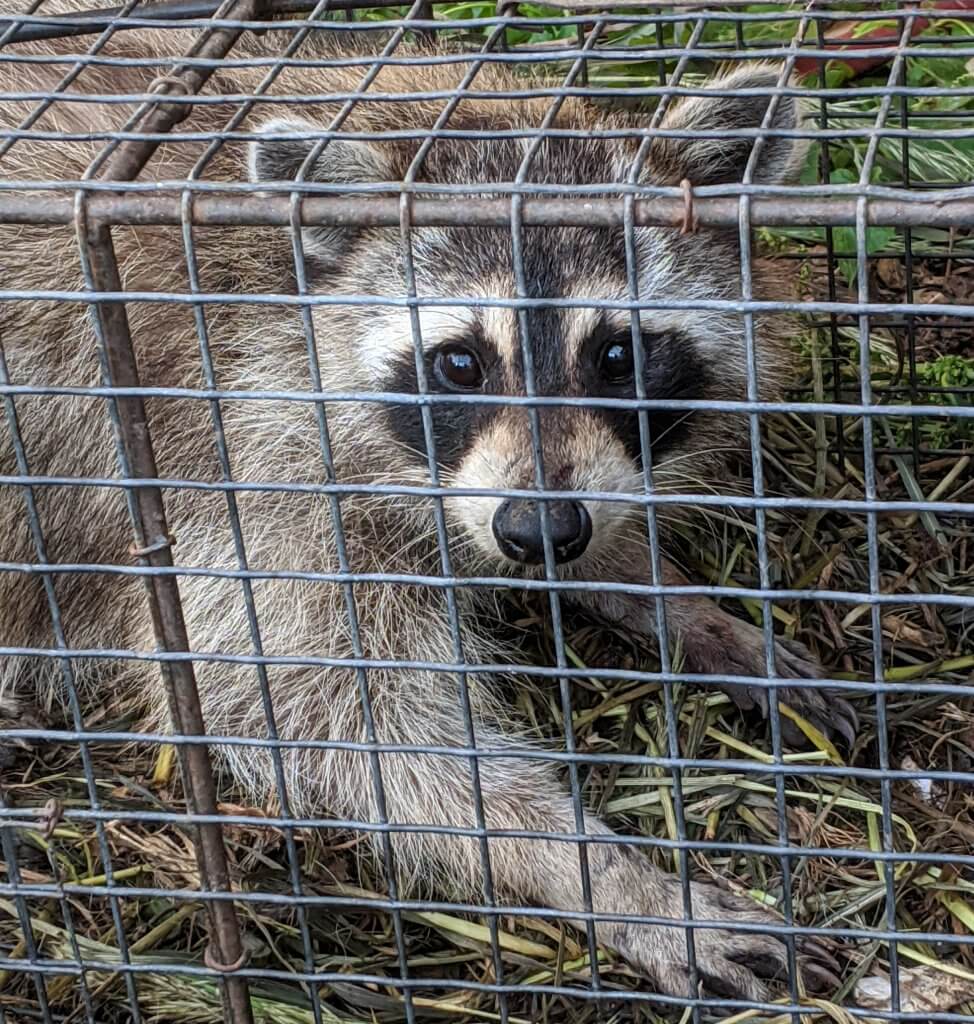 His cuteness is totally misleading.

First, I stamped my feet and gritted my teeth. I might have also wept a few tears for the poor dead hen that lay in my chicken yard, her head torn off, her guts splayed out all around her, her blood pooled in dark stains on the packed earth around her.

It happens. But it’s always such a heartbreak.

Next, I studied the scene for clues for which vile predator did this to my poor Barred Rock. There are so many varmints that want access to my chicken coop. Let’s see . . . the door on the back of the coop had been partially torn up, and the old chair that I use to prop it open in the daytime was thrown aside. A bag of feed had been torn up and spread around, as well.

Coons. Had to be. I cleaned up what was left of the poor hen.

I knew, from sorry experience, that she would not be the only victim if I didn’t take immediate action. I’ve lost a good share of my flock at one time before, but it had been awhile since that had happened.

After I refilled water buckets, hauled feed and fresh hay, and had done every other thing I needed to do (and a few things I really didn’t need to) I went to the broken back door of the coop. All was quiet inside, except for the murmurs of Charles, our bossy gander.

What would I find? An entire slew of broken, dead chickens? 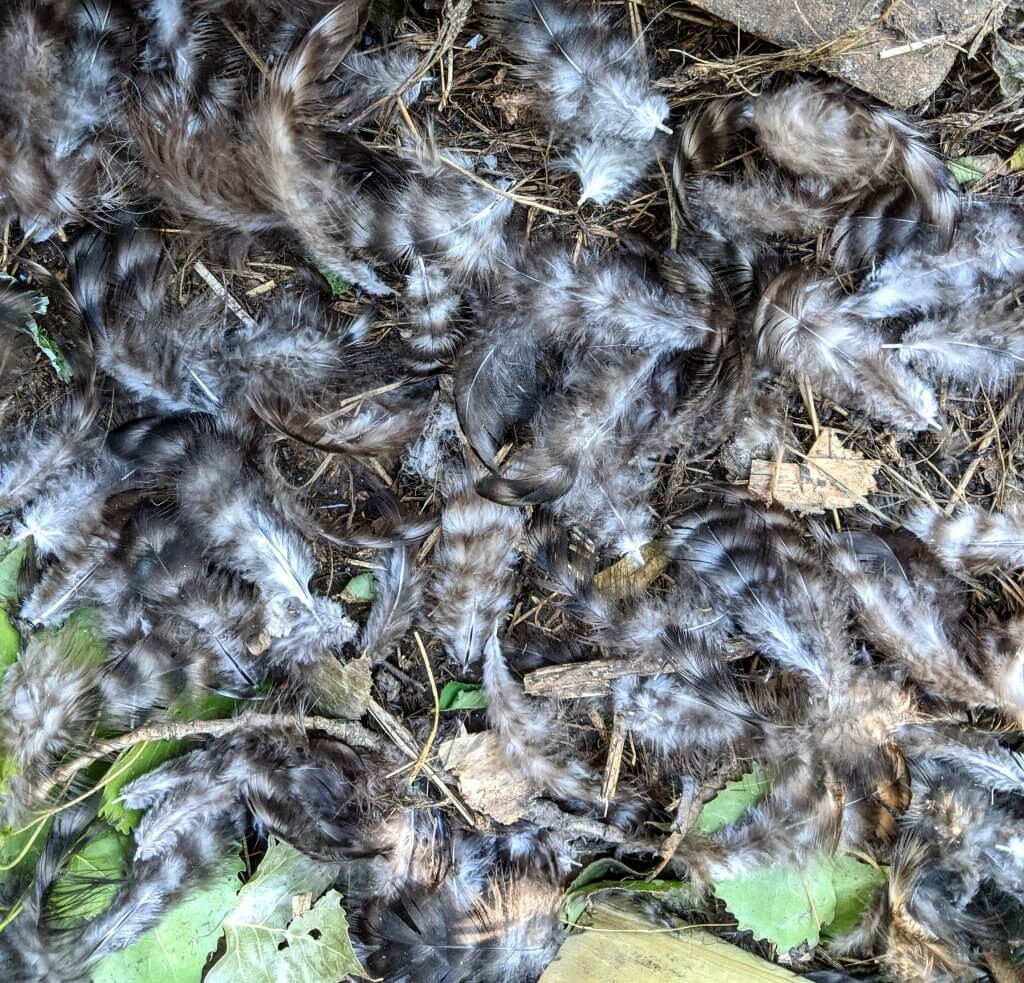 Finally I took a deep breath and opened the door to let my flock out. Usually they push and shove their way out the door, but today everything was quiet and still. Being first to the breakfast offerings trumped fear at last, and my duck Marguerite waddled down the plank, then my bravest hen–Little Red. Eventually, the rest of the flock came streaming out, including proud Charles and his two lady-geese, Petunia and Hyacinth.

Later when I went into the coop to pick up eggs, there were plenty of feathers strewn about, but no other dead chickens. *phew* That doesn’t mean that other chickens weren’t taken by whatever predator killed the hen, but at least I didn’t have to clean up a coopful of dead chickens.

I’ve learned quite a bit from raising chickens over the past nearly-twenty years. Sometimes the best lessons come from the greatest losses. But you have to stay vigilant, day after day, year after year.

So, without further ado, I share my 11 best tips for how to protect your flock from a repeat attack, if you are unlucky enough that predators find your coop. (And I’m sorry, but they probably will.)

1. Don’t wait until the weekend to take action.

Your entire flock might be gone by then. Do what you can to protect your birds today, as soon as you discover the problem. If you need help, ask for it and take steps to prevent further killings.

2. The Enemy of my Chicken is my Enemy.

Subtitle: Learn how the predators in your area behave.

I know these things from (sad) experience: 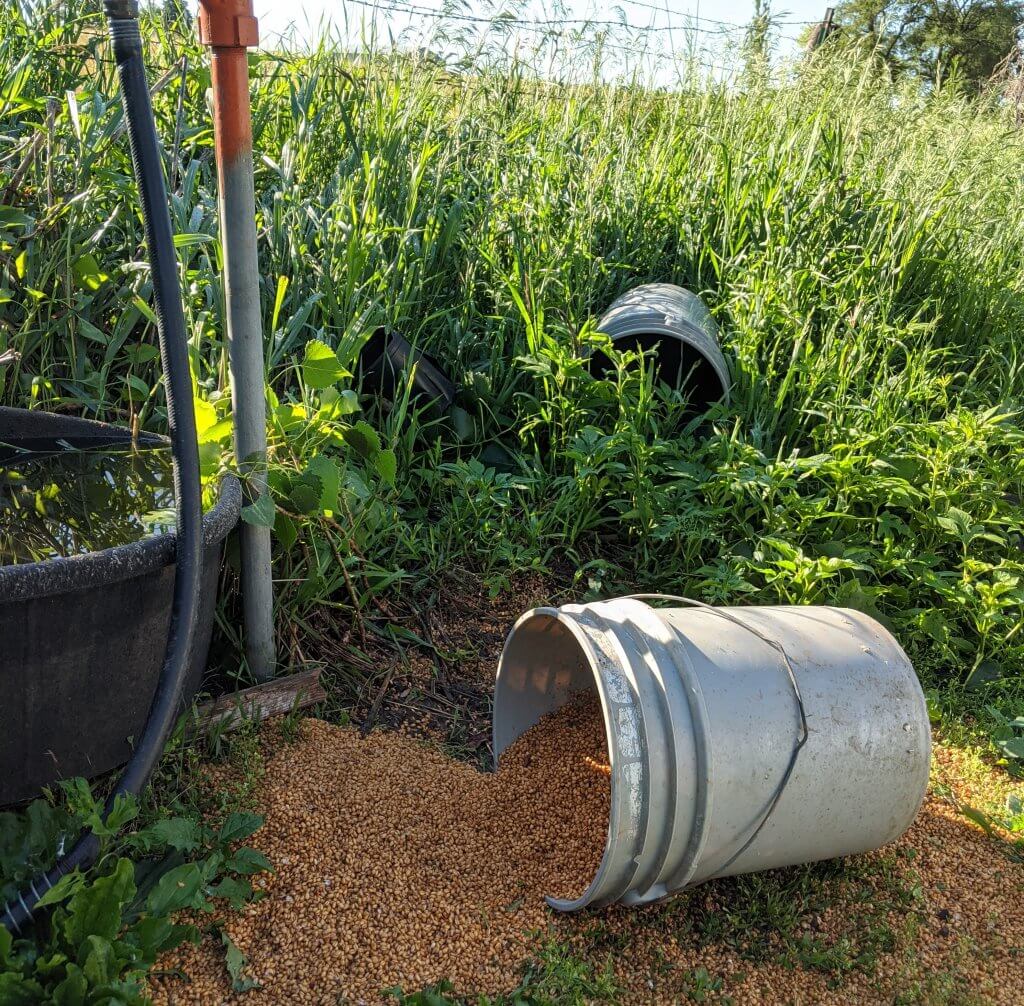 Gosh. It’s kind of a miracle that we can keep any birds alive at all, isn’t it, with that list actively preying on our chickens? And yet . . . with our higher brain power and our opposable thumbs, somehow we do.

The day that Bryan received solar sensor lights in the mail was a game-changer! Though I insisted that I was fine with getting around our place in the dark, he installed them along my path out to the chickens and hoop houses, so I had automatic lights turning on when I went out to shut chickens and close up hoop houses for the night. Amazing! No more fruitless searches for the flashlight! No more stumbling about in the dark! Who knew that a bit of light could be so . . . illuminating (harhar)??

Small, inespensive motion-sensitive lights like these also work as a startling influence to predators in the chicken yard. I can’t say what happens when predators go into the chicken yard, but I can imagine that they are (at least) momentarily startled by having a bright light flash at them when it senses their movement. Maybe (with hope) they think that it’s a bigger predator than themselves, with a powerful flashlight (like, say, an angry farm wife!) and maybe it will cause them to flee and vow never to return!

To watch what is coming and going, installing a trail camera like this one can definitely tell you which varmint is preying on your flock and is well worth the money!

(Plus, it’s really fun to use! It almost feels like Christmas to peek at the photos every few days, to see what’s going on out in the dark while you are asleep. Kind of a dark, suspenseful, dread-filled Christmas.

4. Become BFF with your live trap 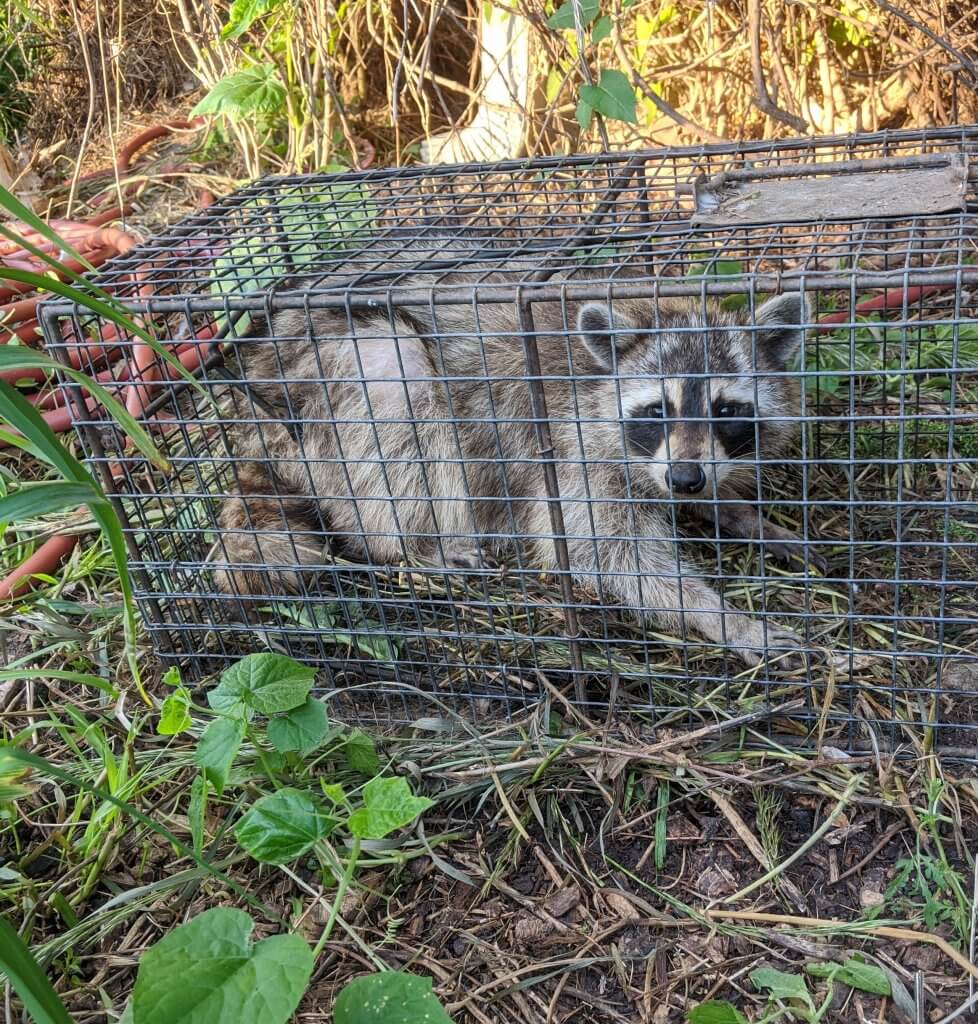 (We caught this little fella with a bait of dried cat food, a raw egg, and peanut butter.)

We’ve caught more varmints in this live trap than I can count. We’ve undoubtedly saved more chickens than I could count, too.

5. Close the flock in at sundown.

Every night. EVERY night. Every. Night. When we’ve had predator pressure, and we’ve been gone from home at sundown, I’ve called a friend to come over and shut the flock in. Scoot those feathered lunches in to safety every night at sundown, no exceptions!

Gentle reader Dave shared a link to this automatic door that I have had my eye on. BRILLIANT. So brilliant. (They’ve got less spendy options on Amazon, too. )

6. Go over the coop with a critical eye 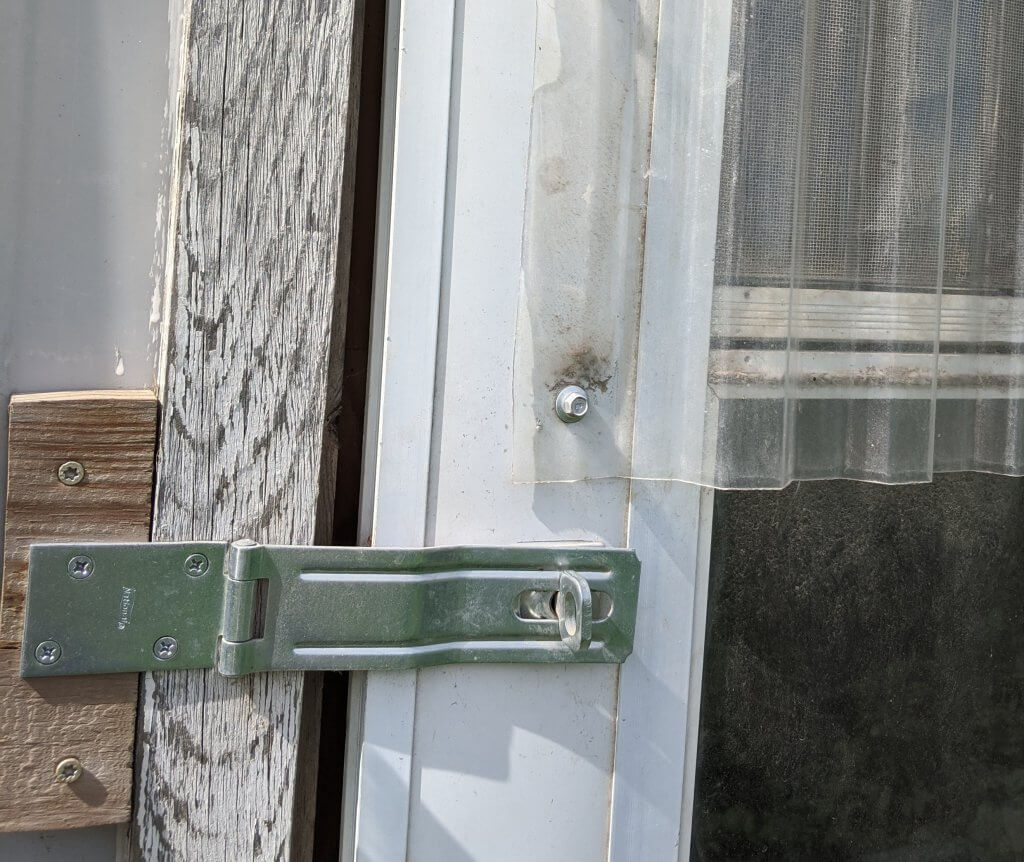 My poor hubby. He has gone over my coop so many times, adding stout improvements like this heavy-duty latch, and the plastic sheet over the screen. (If coons figure out how to open that latch, I’ll . . . I’ll . . . eat my straw hat!)

My poor longsuffering hubby. Bryan has replaced screens with hailscreen; put a stout latch on the coop front door; rebuilt the back flap door several times; reinforced windows and the clean-out door; probably he has done more tasks that I don’t remember. (Thanks, honey.) I guess it goes without saying that if you build your coop like a FORTRESS from the get-go, you’ll never have to take all these measures.

And now that I’ve said it, you might as well do it, better now rather than after you lose a flock of chickens.

By the way, this is a great little weasel-proofing product: 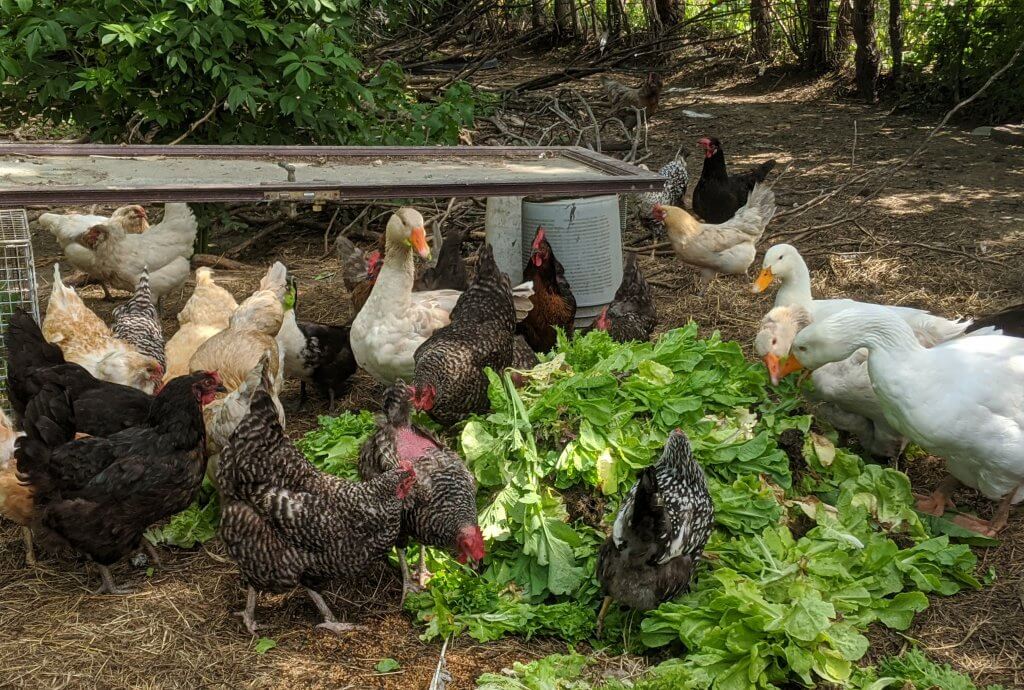 My usual routine includes sashaying out to the chicken coop in the late afternoon, to let the flock out of their yard to allow them to forage for a couple of hours before bedtime. If I’m having trouble with predators, I leave them in their yard and try to find goodies (like the wheelbarrow-full of greens, above) to throw to them for the evening.

They aren’t as happy with this arrangement, but I remind them that it’s temporary, and that they won’t be very happy if they are dead, either. (We do have some difficult conversations, from time to time.)

8. Your flock must belong to the Clean Plate Club. 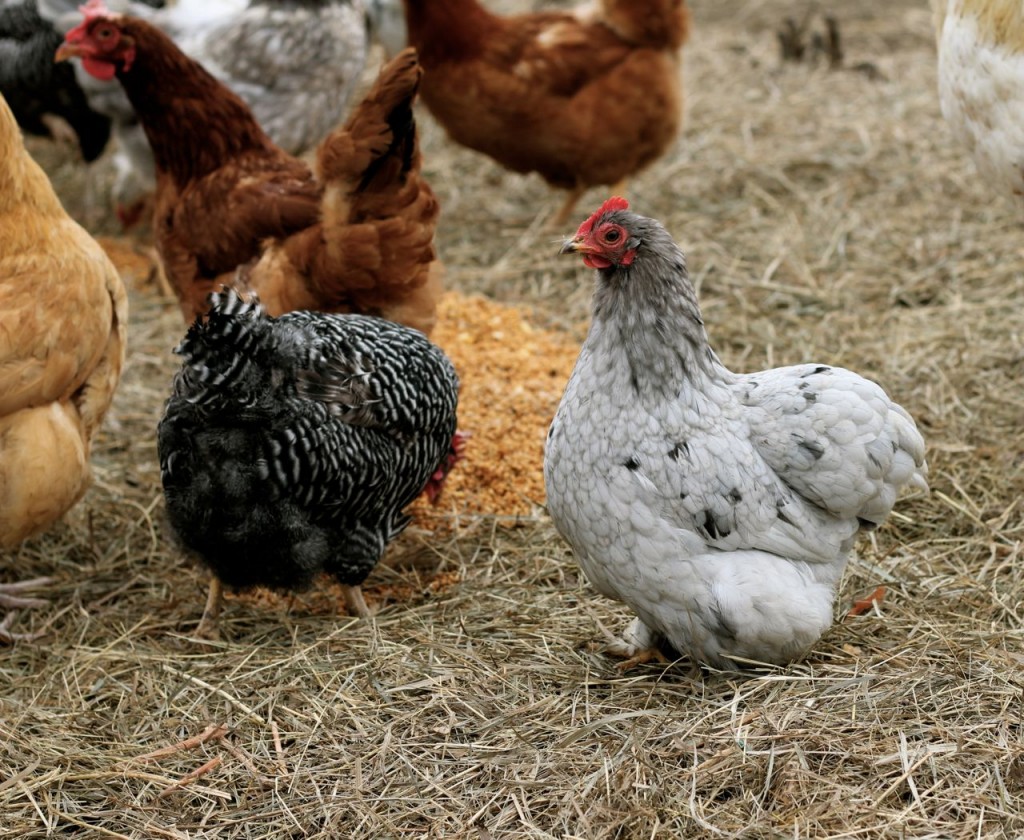 Here’s our favorite chicken (shhh–don’t tell the others!) Babes, enjoying the anticipation of breakfast, but taking a second to pose decorously for a portrait. She’s just great that way.

Subtitle: leftovers are for the birds . . . your birds . . . not for the ornery predators in your area. Get familiar with how much feed your flock really consumes every day, and let them run out by evening. (This is another reason to feed them sprouted grains, which lend themselves to being buried and then dug up again. If they are super-hungry for a bedtime snack, they can always dig up those little grains.)

Leaving leftovers lying in the yard or the coop is a terrific way to attract rodents and other predators, too. You don’t want predators. Don’t leave leftovers.

9. Good Fencing can be a game-changer

We keep a gimlet eye on our chicken fence and repair and reinforce it constantly. We’ve strung up old CDs along the top to discourage birds of prey. We’ve extended the top rail and made our fence over 10′ high. We watch for where the smaller, more clever birds slip out, and patch the spots. We also clip wings so chickens can’t fly out, but this is hard to keep up with, honestly.

(My Icelandic chickens are so lean and smart, and good flyers, too, the little dickenses.)

I’ve never used electric netting fencing before, but a friend of mine uses it around her chicken tractor and is very enthusiastic about it. Another friend said that they laid sheets of fencing down on the ground, to prevent varmints from digging underneath the fence. Smart, huh? 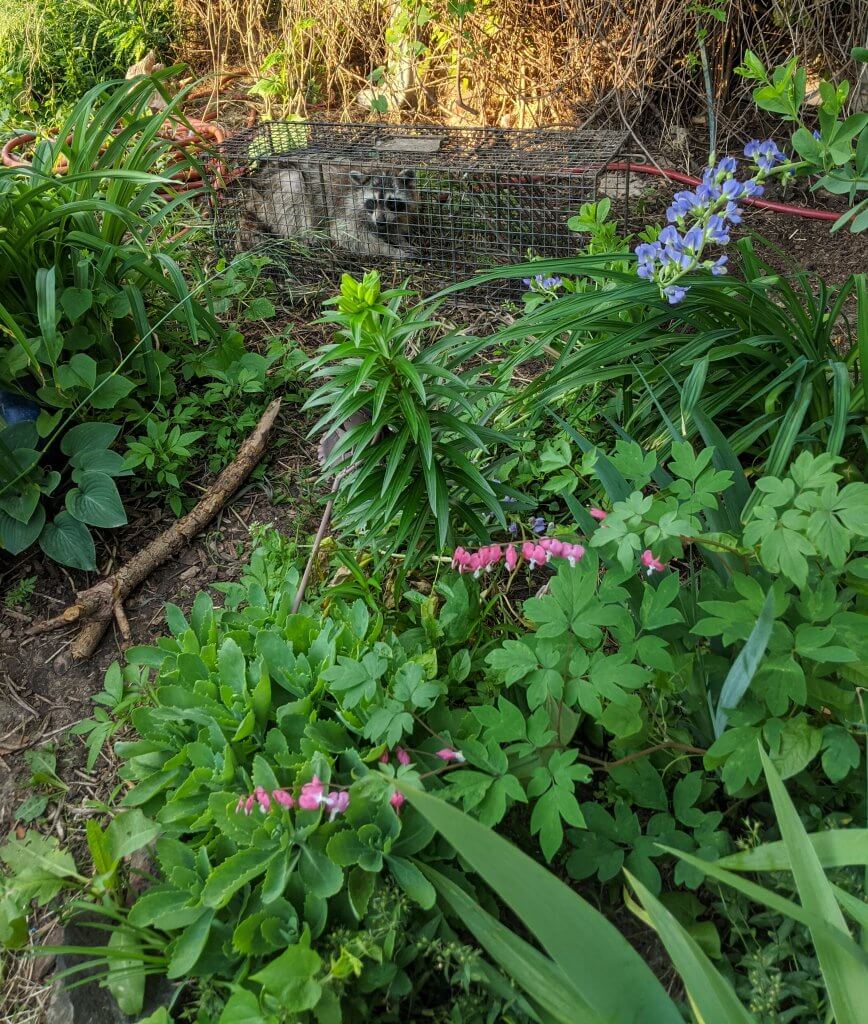 I may string electric netting around my chicken tractor this summer, too, to protect my broilers that will be overnighting in there. (I may sleep better if I take that step.)

10. Get a Livestock Guard Dog

We have two goofy mutts–Scout and Capone. I wouldn’t call them Livestock Guard Dogs, because they weren’t raised with my flock, but they will take down a raccoon or an opossum in a heartbeat if given the chance. They definitely have a protective instinct towards our place, if not our flock.

I’ve always been intrigued by LGDs though. Maybe someday we’ll get one. Meanwhile I’ll learn all I can about them. Here’s a good overview of the breeds most commonly used as livestock guard dogs.

So. There you go. There are so many things to consider in making your flock as safe as possible. Other than actually bringing them into the house (Bryan said NO) I think we’ve done nearly everything we can imagine, and still sometimes we struggle with predators.

* Did you know that I wrote an ebook with over a hundred tips for how to take better care of your flock? You can take a look at it here.

* Did you know that I have a very active Facebook page with gentle readers from all over the globe? In fact we were just confabbing on this very topic, and I got lots of great ideas from those who contributed. Too many to put into this post, as a matter of fact! So pop on over there and take a look, if you have a mind.

*Did you know that daughter Bethie and I are producing a podcast? We’ve been talking about all manners of things, like books, movies, homeschooling, disastrous vacations and gardening tips. One of these days, we’ll talk chickens. Oh yes. We will. You might want to listen in!

Thanks for popping in, dear friends. Take care.

3 thoughts on “The Enemy of my Chicken is my Enemy: 10 tips to protect your flock”