A new baby in the family is always cause for joy and for worry. A setting hen for me is in the same category. I’ve had many hens who have tried their hand at motherhood, some with wonderful success and others with disaster.

As I’ve explained before in this space, a hen has to be not only doggedly determined, but also clever and wily to hatch chicks at our place. It simply doesn’t work to sit on eggs in the chicken coop, for example, although that’s what most broody hens try to do. The structure is just too small for that, and the other hens will bully the setting hen off her nest, and lay fresh eggs in her spot. She’ll sigh and dust herself off and she’ll get up and just go to a different clutch of (freshly-laid) eggs and start afresh, leaving the other partially-incubated eggs to chill. Also, the heavy-footed Farm Woman (that’s me) picks up every egg in the coop, every day, so it just doesn’t work.

Nevertheless. I have a number of very determined hens who sit all summer long, inside the coop, on whatever eggs they choose. They are serious. They are quiet and sober. They are tenacious. But they aren’t clever.

A clever hen will hide her nest someplace where nobody, and nothing–no fox or farm cat or clumsy, egg-hungry dog, or weaselly opossum, or heavy-footed Farm Woman, or well-meaning guest child from the town–will disturb the nest. She will lay an egg a day, whistle innocently in between, as if nothing is happening of any import, and then when the nest is full, she will settle down and sit and warm the eggs, turning them several times a day, not leaving the nest, except for the occasional bite to eat, or drink–for twenty-one days.

Helen has proved herself to be a clever hen. She was sitting on a clutch of eggs, in fact, that we were unaware of, hidden as she was in the compost pile. One day Bryan loaded some grass clippings into the compost, disturbing Helen and upsetting the nest. The eggs went rolling down to the ground, and I discovered them much later. Helen had claimed another spot by that time. I was impressed by her cleverness, so I gathered up some fresh eggs and put them underneath her, and crossed my fingers.

The compost pile is a very smart place for a hen to brood eggs, for many reasons–it’s near a great food source (weeds, garden plants, weeds, and bugs, and numerous weeds) and it’s nearly invisible and since there’s a fence around my garden, and the compost pile is inside my garden, it’s a protected spot. The dogs are not allowed in my garden, and since I trudge through the garden every day, I could keep an eye on the wanna-be mama. And so I did. And this is what I saw in Helen: a steelly-eyed, fierce firmness of resolve that impressed me. I hoped that this resolution would translate into Helen being a good mama to new chicks, too.

Because our weather has been fairly turbulent for this season, with many wild thunderstorms and some hail and high, scary winds, I took a moment to build a little roof above Helen–it was just a plastic trash can lid with some boards to keep it in place, propped up above her and against the side of the compost pile. It would give her a bit of protection against the weather and the hot sun bearing down on her. I wished her well. 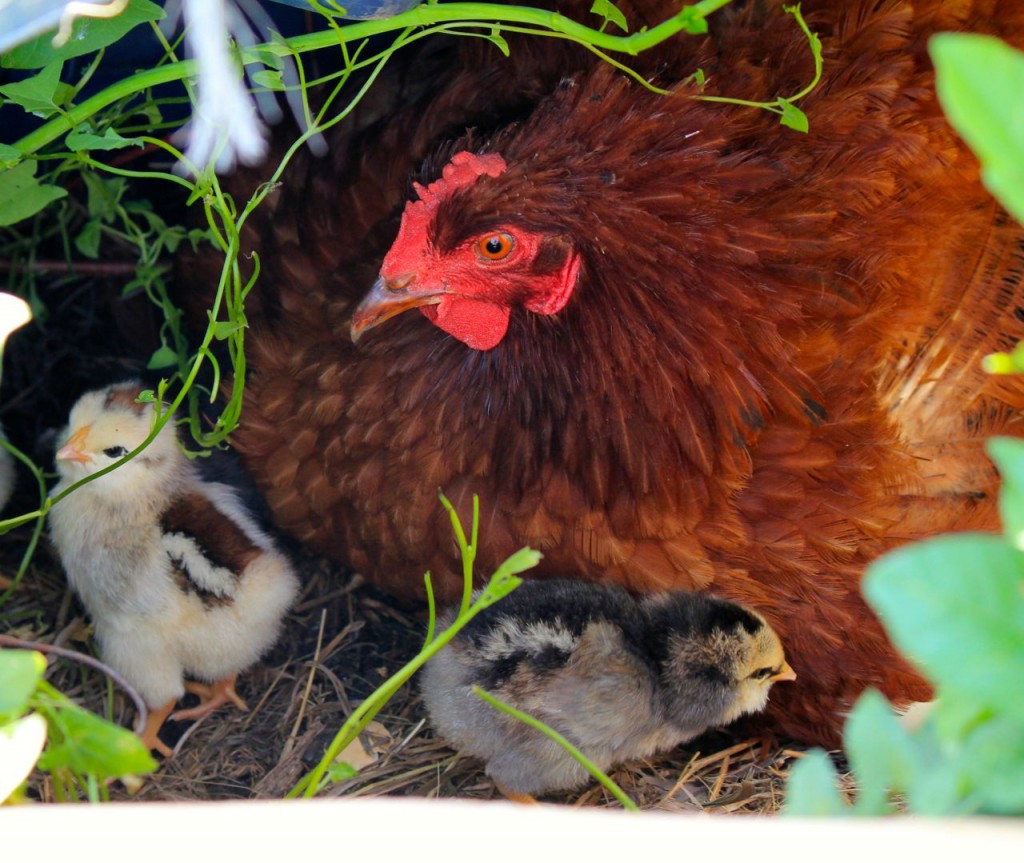 A cause for joy. Well done, good and faithful chicken.

She didn’t budge off the last few eggs (one did hatch, and two didn’t, and then she abandoned them the next day) while the new chicks played around her. I was so proud of this hen. Sometimes bad things happen once the chicks hatch: a new mama will sometimes attack the chicks, or immediately abandon them. Not Helen. As I watched, the chicks curiously pecked at her waddles, her comb, even her eye, and she just sat quietly, murmuring deep in her throat, in that peculiar voice which is unique to broody hens.

“There, there, my darlings. Mama loves you. Not so close to the eye itself, dears. You are a delight to me, every one of you, my precious children.”

Once Helen and the chicks got off the nest and started wandering around the garden, little Mack and I caught them up and put them into the nursery, with water and feed and plenty of green weeds and grasses to peck at. I’ll keep them in there for a few days, until the chicks are just a little bigger and know the robes about doing just what mama says, and then I’ll let Helen lead them back outside and that’s where this new little family will spend their daytimes: walking about, learning which weeds and which bugs are the best, scratching in the dirt, taking naps in the sunshine, being taught about the dangers of life from their mama, and learning about life itself.

I could draw plenty of human parallels here, but I hardly think that is necessary. Anyway. It’s a beautiful day, and I need to get the kids outside. 😉

Hey there–I’m going to link up this post with the cool folks over at The Prairie Homestead. Join me!

Tagged on: backyard chickens, broody hens, care of new chicks with hen, hens with new chicks, how to care for new chicks and mama hen