We came home to a far different Nebraska from the one we left, nearly three weeks ago. When we left Nebraska for New Zealand in late February, the earth here was brown and still and quiet. There was snow on the ground; the ground, in fact, was still frozen; it was winter. It warmed up (natch’) while we were in New Zealand (our friends and family at home enjoyed the warmest February ever) and by the time we got home in mid-March it was a different world entirely.

Winter, for the most part, had passed while we were away. Had we been gone that long? 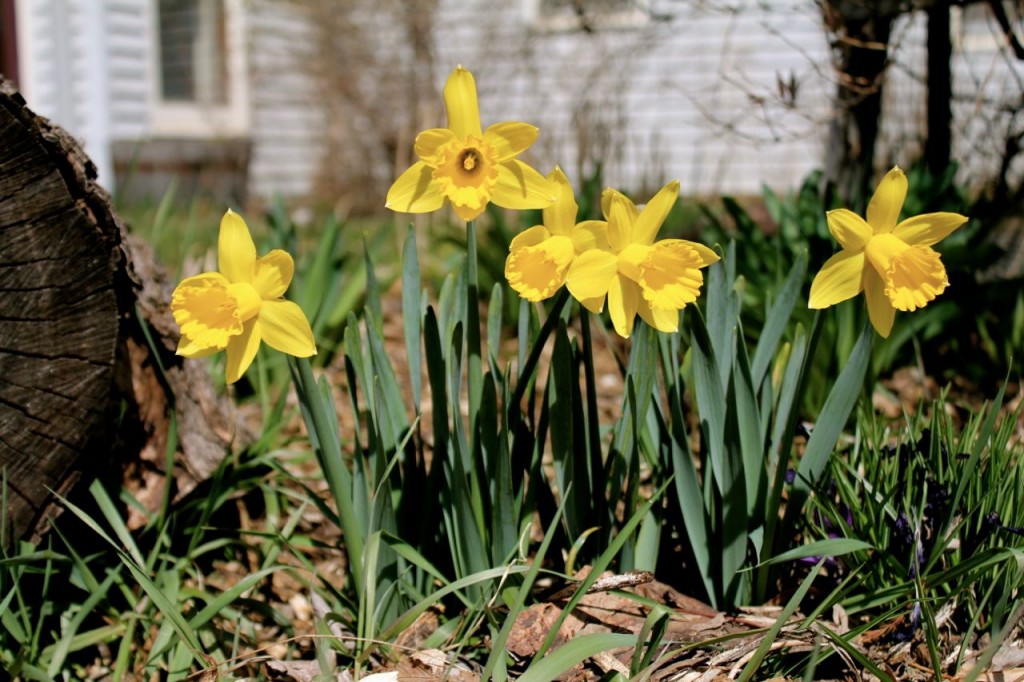 There is nothing-–nothing, gentle reader–that will sharpen your appreciation for home more than travel away from it. In my humblest of opinions. To wit: when we left, the kids and I had only been home for a few days after our Ohio trip, and (of course) we were then (and still are, and ever, lo, shall be) working on a kitchen remodeling project. Yea, verily, we probably will be until they roll my tired, cold old body into a shallow grave (“No time to dig a deep grave, fellas, we’ve got to finish that kitchen!”)–so the ratio of orderly-areas-to-disaster-areas, couldn’t really have been worse. Well. If there was an all-consuming fire–God forbid–that would have been worse. Or a direct tornado hit–also, God, please be merciful, it’s nearly tornado season here, these are just hypotheticals, truly!–I can imagine it would be more chaotic here than it is now.

Okay, I may be guilty of just a bit of hyperbole here. Maybe.

There is nothing that will sharpen your appreciation for home more than travel away from it. 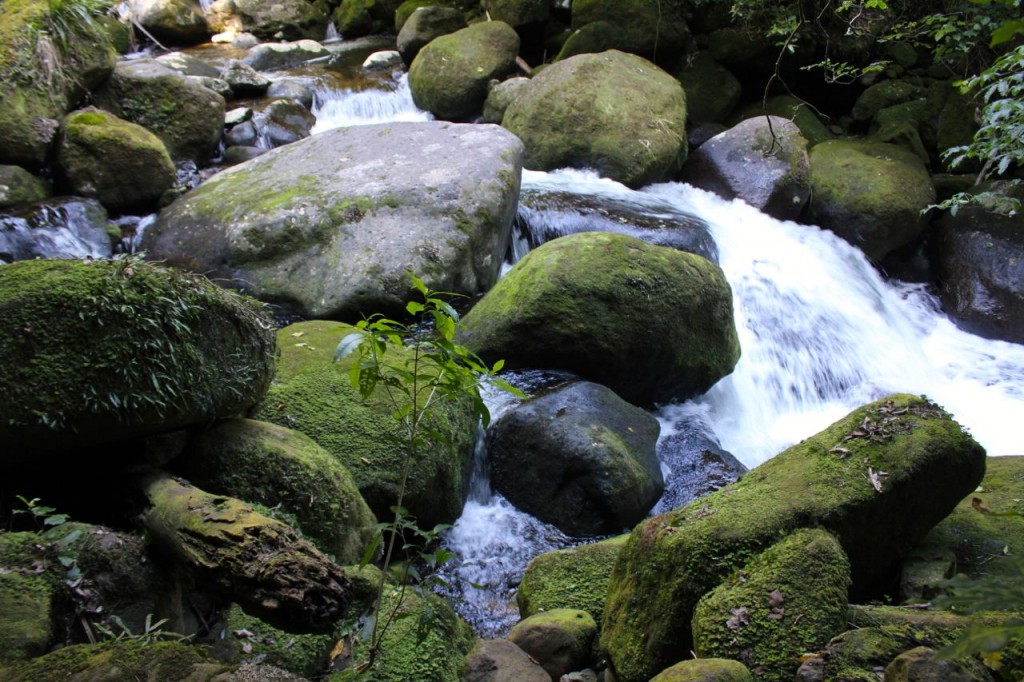 …Even if–EVEN IF–where you visit happens to have these sorts of sights in grand abundance.

But only those two God-forbidden events, possibly, or others of their disastrous ilk, could render our place more inhospitable to comfortable human life than it is right now. Gentle Reader! There are two toilets, three sinks, a bathtub, and several piles of boards full of nails just outside the back porch. I haven’t figured out what to do with them yet, but I need to. Remodeling a big portion of your house is not for the impatient, the neatnut, the overly-sensitive, or the faint of heart.

Or the sane, apparently. 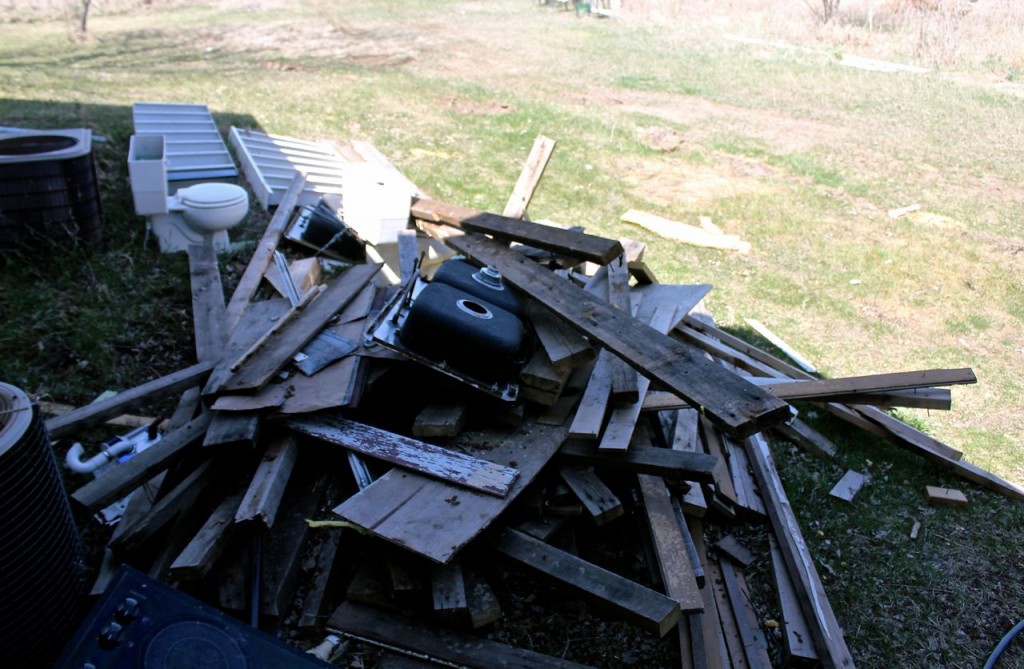 Not making it up. See?

So that is what we left behind, and I didn’t look back, to be painfully honest. I was ready for a break, to put it mildly. By the time our nearly-three-weeks-trip was over–even if it was in a part of the world that I consider pretty darn close to paradise–I was longing for home. Longing, Gentle Reader, painfully so. Home in all its disarray, home in all its state-of-fluxness, home–with all its clutter and everything in it that points to my many (many!!) flaws and failures–that’s where I wanted to be most on earth, more than anyplace else.

More, even, than paradise on earth, ergo, New Zealand.

Isn’t it a pleasant thing, that our hearts can dig down so deeply and become so attached to a place–and its people–even though it is patently imperfect? We don’t have to own perfection, or even just a little bit of it, to be supremely happy at home. Also, this is an interesting read if you have been thinking about happiness, which I think most everybody does, at one time or another. . 🙂 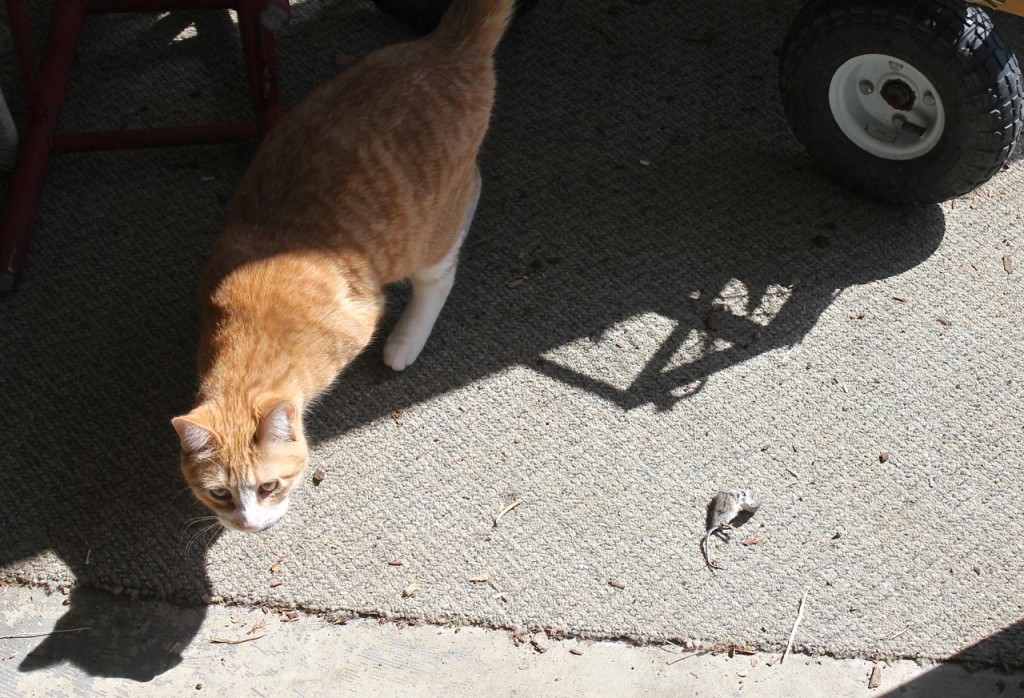 Our kitty Goldberry needs only two things to be supremely happy for an entire morning: a dead mouse and a pleasant ray of sunshine.

Here’s all I need to be completely happy: to live close to a few people who love me enough to put up with me the way I am, to have a garden (a big one!) 😉 that I can putter in year-round, to have a good book and perhaps a knitting project that I can pick up when I’ve gotten too tired at the end of the day to putter–these are the things that make me happy. All the rest is gravy. Frosting. Whipped cream. Wasabi sauce for the raw fish, to use a New Zealand picture.

I hope, my Gentle Reader, that you’ve discovered the few things you need to make you happy, too, and that you’ve got those things in your life, at least most of the time.

Now. Back to the changes three weeks in early early spring wreaks in Nebraska:

My daffodils are blooming and tulips and daylilies are pushing up out of the ground. The grass is greening up slowly. The crabapple trees that line our driveway are budding out. The willow tree out front has turned spring green, and now to glowing yellow. My eyes, always hungry for color this time of year, drink all this color in. 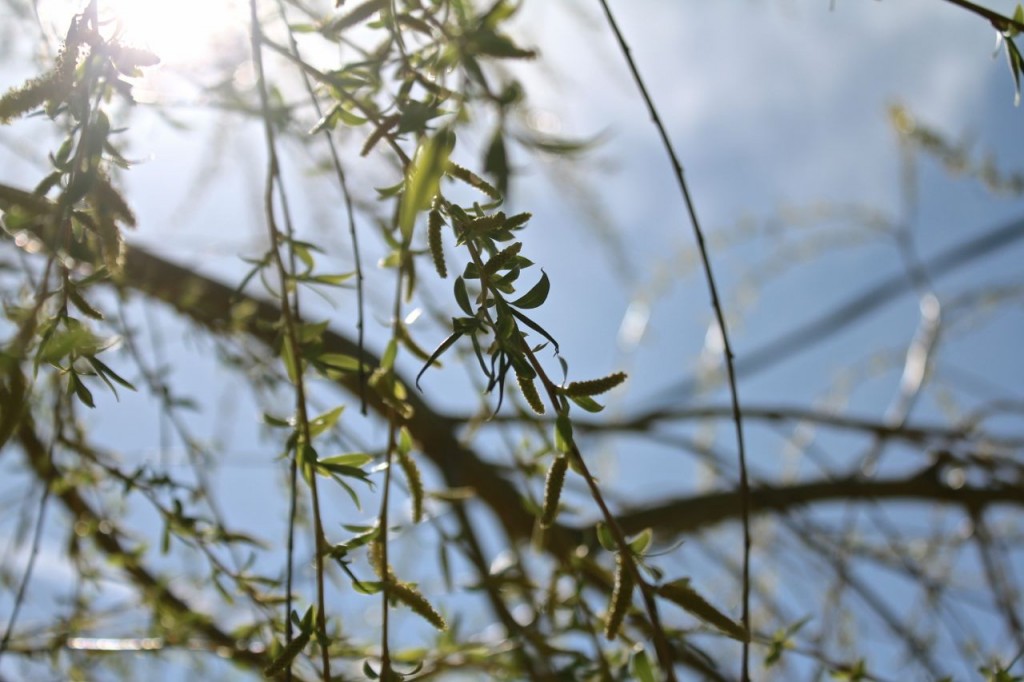 I did a lot of planting of seeds in plug trays about a month ago, worrying the entire time about what would become of my delicate baby seedlings while we were on the other side of the world. Then my friend Gene invited me to install my plug trays into his super nice germinating chambers a couple of days before I got on an airplane for New Zealand. It’s good to have friends like this. 🙂

“Greater love hath no prairie woman than this–that a friend will give up space in his germinating chambers in late February for her–!” That’s what I thought at the time. It was a nice thing for him to offer, and then a few days after we got home, I loaded them all back home (that germinating space is in high demand, after all) and my Trailblazer, Shimmy by name, looked like this: 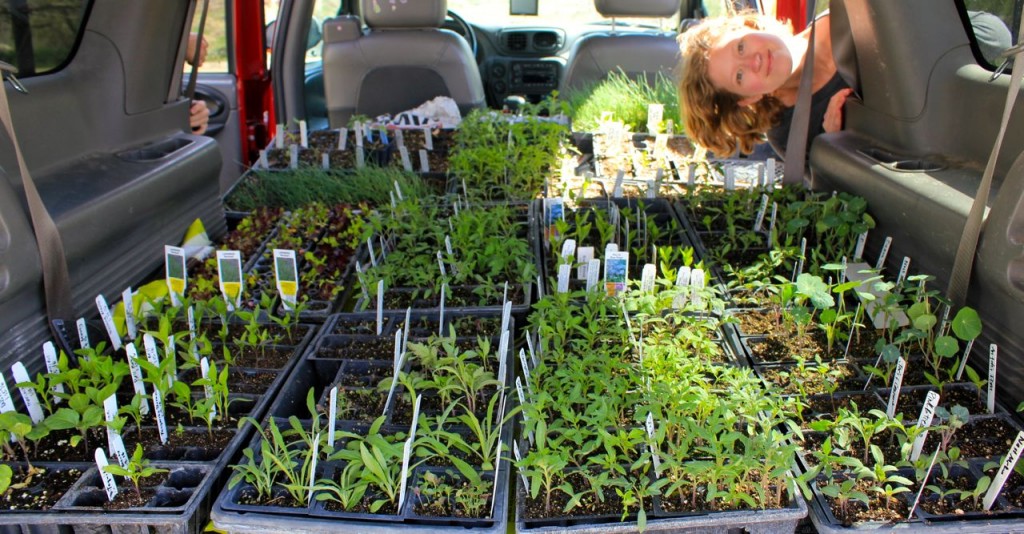 It took me a couple of hours to set up a new germinating area in the basement (with patient hubby’s help) but already I’m going to need to expand it . . . (cue maniacal grinning) . . . I’m not finished planting yet, not by a long shot!

It won’t be long before these babies get moved to the sunny window on the back porch. Then they’ll go out into the garage, on long tables which will be moved into the sun on nice days, and make for a much easier watering process. Sound like a lot of work? It’s a labor of love, baby.

Once I get it all set up, I can plant a little here, and a little there. My germinating and planting areas are very humble. I mix up my potting medium in a wheelbarrow in our cluttered garage (*cough* no photo available).

I poke seeds into flats here on our back porch, or at the kitchen table (if it’s too cold on the porch, or too dark). 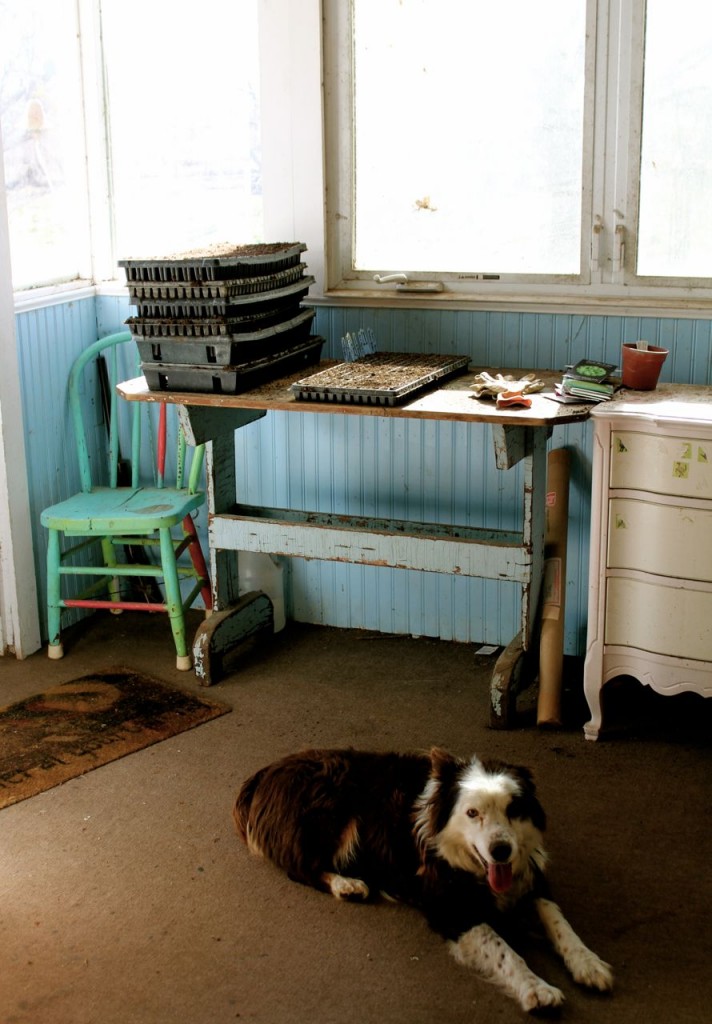 More changes, in the orchard:

Some of the fishing line fence (put up against the deer) has been busted from winter deer activity, so Mack and I will repair that today. It takes only minutes, and it’s a great excuse to get a bit of exercise and sunshine. The early spring growth and buds are relished by the deer in our area. My failure to reinforce my fishing line fences last spring meant no blueberries for us. The deer moved in one night, all at once, and clipped off the new season’s growth, and with it, nearly all the berry buds.

So I won’t forget to check the fences daily for the rest of the season. I won’t! Especially not with all these blueberry buds teasing me. It looks like it will be a great blueberry year. 🙂 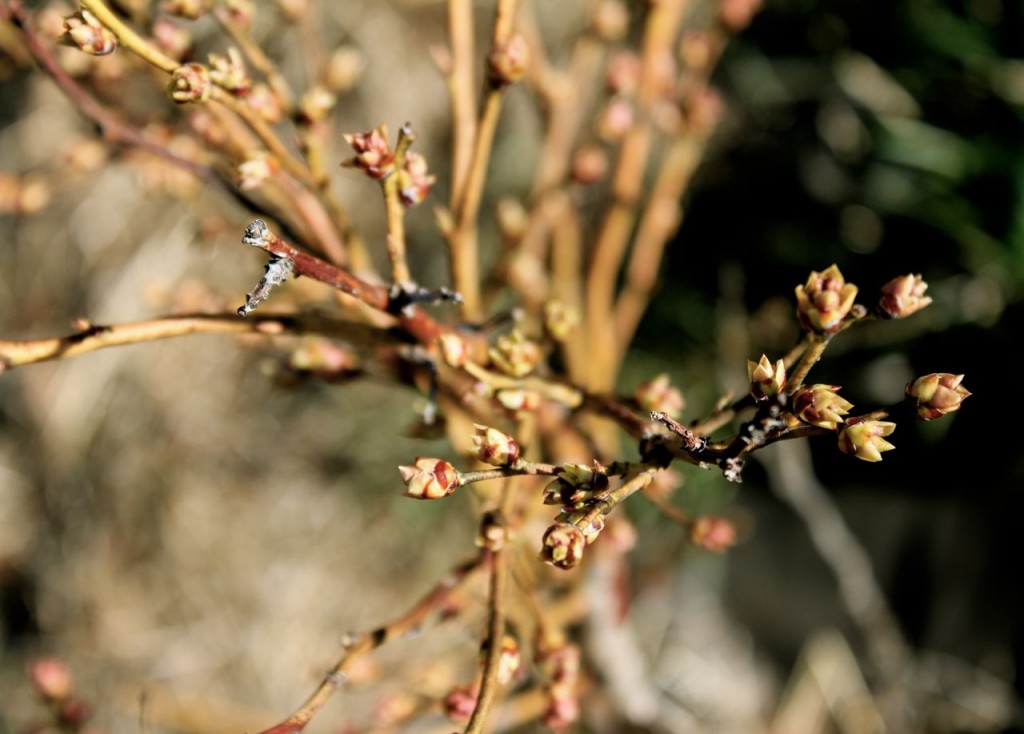 Rhubarb is poking up. I love the variations of color in these early spring buds and folded, leathery leaves. 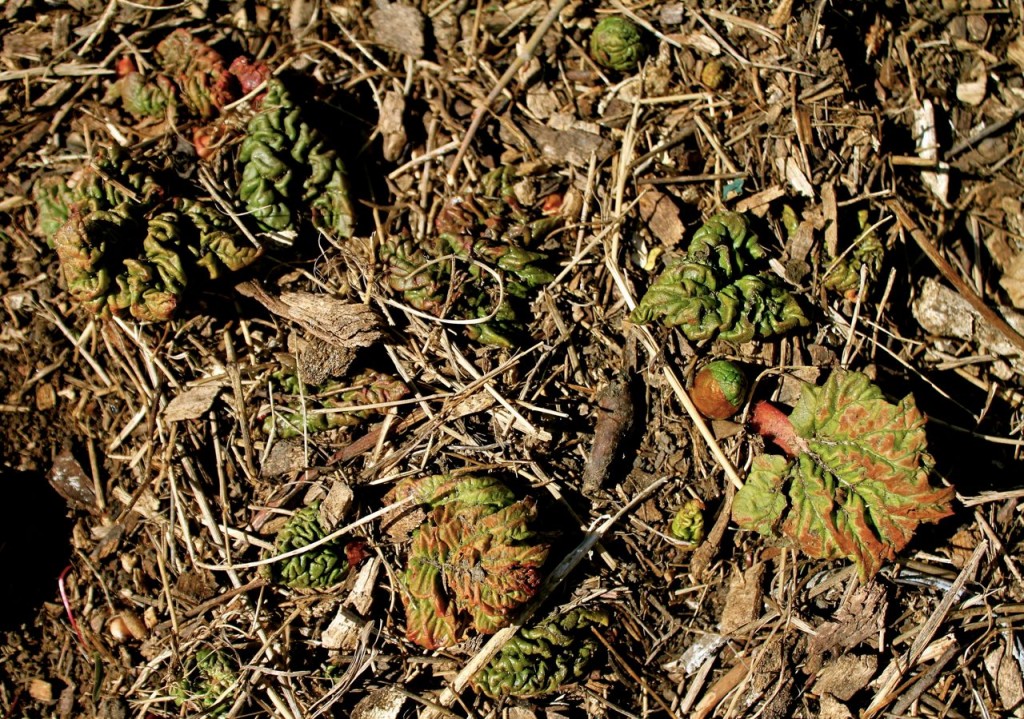 This is what the cold frames in the hoop house looked like when we got home: 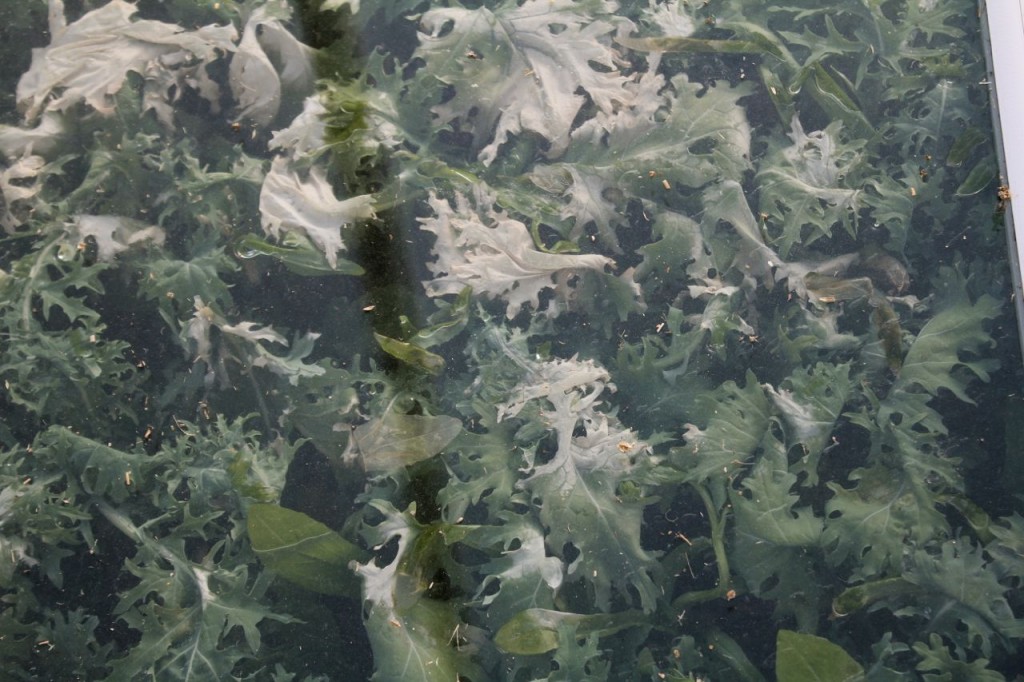 The warm days (and nobody home to lift up the frames against the heat inside) brought on rapid growth for the kale and the mustard greens and the arugula inside. We’ve got another cold week here, so I’ll harvest as much of this green stuff as I can, and throw the raggedy bits to the chooks, and prepare the cold frames for tiny lettuces and other greens that are now luxuriating in the basement plug trays.

Any time I’m outside for more than a few minutes, I indulge in running a sprinkler in the hoop house. Last spring, I made the rookie mistake of trying to rototill it after a long, cold, dry (in the hoop house, of course, it doesn’t snow!) winter. I was dismayed then to see the dirt in the hoop house was so hard and unplantable. I cleaned out the chicken coop many months ago, and spread the bedding in there, which feeds the soil nicely. So I’m making sure it’s ready to plant when the time is right. 🙂 And it won’t be long now!

What’s going on in the garden, in your neck of the woods? Have you started anything yet? I’d love to hear about it in the comments below. There’s nothing a gardener likes to talk about more than this. 🙂

Tagged on: early spring growth, gardening in early spring, growing blueberries in Nebraska, March garden plans, Nebraska early spring garden, what should I have in my garden in March?

7 thoughts on “What’s going on in my garden in March; and why I’m happy to be home”