You can tell she’s a female from the eyelashes and the dainty size of the snood.

First, Jenny grew up (she was Jake, until we realized that she was a Jenny). And her owner Mack is growing up too, at least that’s what he keeps telling me. Jenny is an amusing addition to our menagerie, and our only turkey, since her two poult companions came to unfortunate ends due (no question) to their youthful lack of caution in ordinary circumstances. (See, kids, be careful, particularly around a. skittish companions who will pile atop of you in times of scariness, and b. water buckets nearly as big as you–if you haven’t taken swimming lessons yet, which if you are a two-week-old turkey poult, you definitely have not).

Our initial plan, Mack’s and mine, was to add three turkey poults to our flock. We would choose two to keep for breeding stock, and the third we would contribute to the Thanksgiving table (in one grand gesture, on the turkey’s part, on his one bad day).

But with only one left, where does that leave us, I wonder?

You can well guess, gentle reader. She does make a charming addition to our flock. She has quirks, like being able to get on top of the chicken coop, but then not being brave enough to fly back down, and spending the afternoon making pitiful, wistful peeping sounds, until the local farm lad trudges out to help her down.

(This makes this old(ish. ish!!) farm woman smile, and I tend to treasure the things that make me smile.) 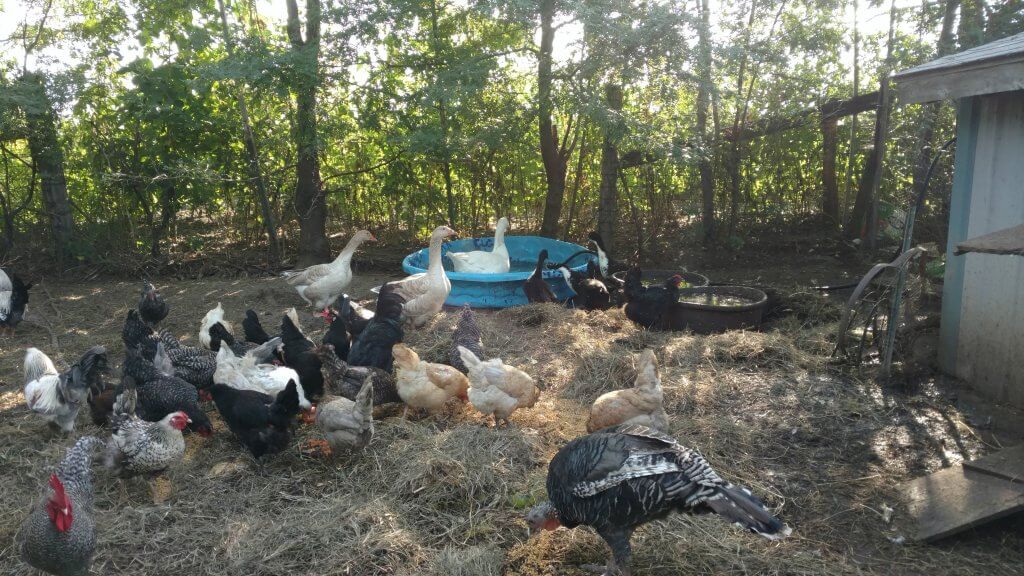 Lots going on at breakfast time!

In the chook yard

Second: For a change, we haven’t endured wholesale slaughter of our flock this summer (knock on wood!), and the spring pullets that I chose as chicks have grown up and are now laying eggs with utter abandon, so that’s good. Three pullets, however, turned out to be roos, and that’s not good. Also I have two extra male ducks (drakes) that I need to “do something with” before winter. That makes five healthy male fowl to make plans for within the next few weeks . . . and for once, I do have a little room in the freezer . . . 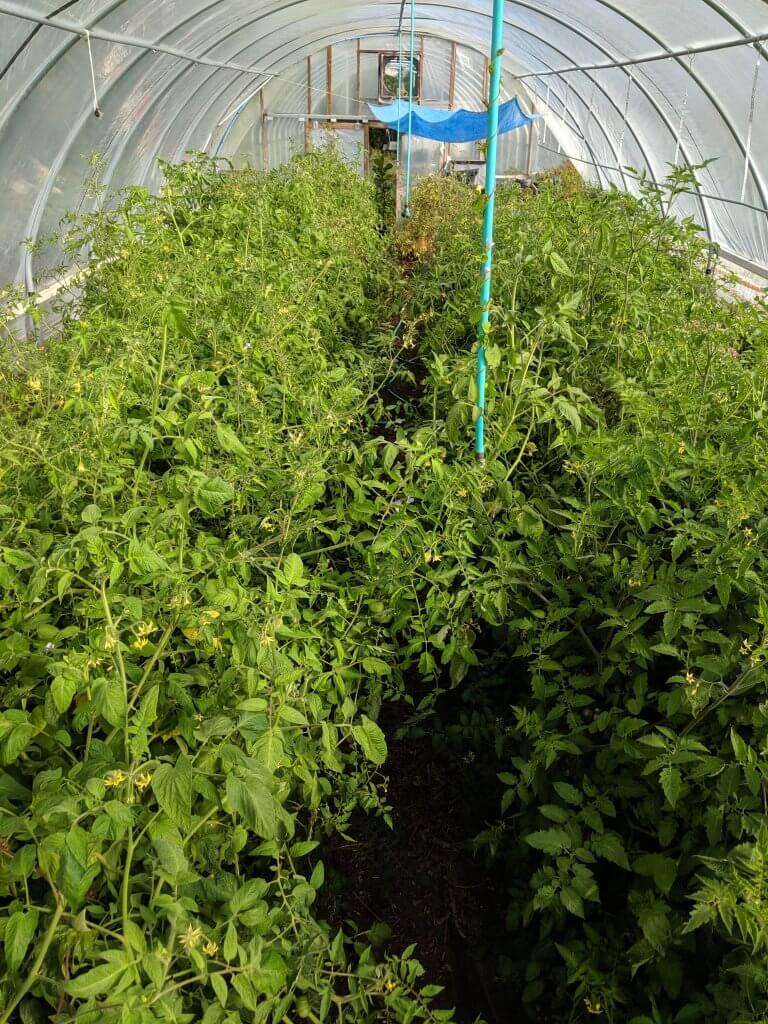 My. Those itty bitty tomato plants did grow up, didn’t they?

Speaking of the hoophouse

Third, I looked back at the last one of these farm update posts that I wrote, whereby I semi-apologized (in my charming *cough* way) for the weeds in the hoop house photo. Of course, none are even visible, at least not to a casual observer. That was early in the spring, during which the rain fell and fell. We kept waiting for it to stop.

The rainy season continued all summer long. Consequently, this summer has been The Summer of Weeds. With copious amounts of water issuing from the heavens practically every day, THIS summer has had WEEDS.

Every pair of jeans that I wear outside gets muddy very quickly. I wore out two pairs of shoes because they were wet all the time and just fell apart (not kidding).

So I didn’t really have an idea, at the time of that (charming) apology about the scope and sequence of WEEDS. A sadder and wiser gentle blogger types these words.

It was a summer of growth of everything, not just weeds. Perennial plantings, trees, teenage boys, and everything else just grew and grew. Case in point: it’s mid-October and I heard my hubs utter these words just yesterday: “We really need to get the mowing done.” Those words don’t usually issue from our mouths in October. Every month from May through August, yes. September? Maybe (if we’re lucky) once or twice. But not in October. This year, we’re still mowing, be it October.

And my hoophouse looks like the photo above. *rolling my eyes*

Yes the rumors were true

Fourth, yes we have a new building project in the works . . . a second hoophouse, a little nicer than the first. Initially we had planned to heat at least a portion of it (so we could move the tender plants out of the BELEAGUERED basement) but our research showed that it would be just more expensive to heat than we were prepared for, so instead we are just going to stretch the capabilities of what we can grow through the changeable Nebraska seasons, twelve months out of the year times two!

I’ve got to say a special thank-you to my longsuffering hubs, Bryan, and my good-sported son Mack, who’ve been more generous than I can even explain in the amount of time that they’ve devoted to this project already. And it’s not finished yet. They are rock stars in my world. Thanks, guys. xoxox Also thanks to the family and friends who poured out to help get the heavy hoops into place when we needed to, and came to unload the truck. An old-fashioned barn-raising! Except that it was hoops.

Being surrounded by family and friends, eating together, working together, laughing and telling stories . . now that’s living, my friends. 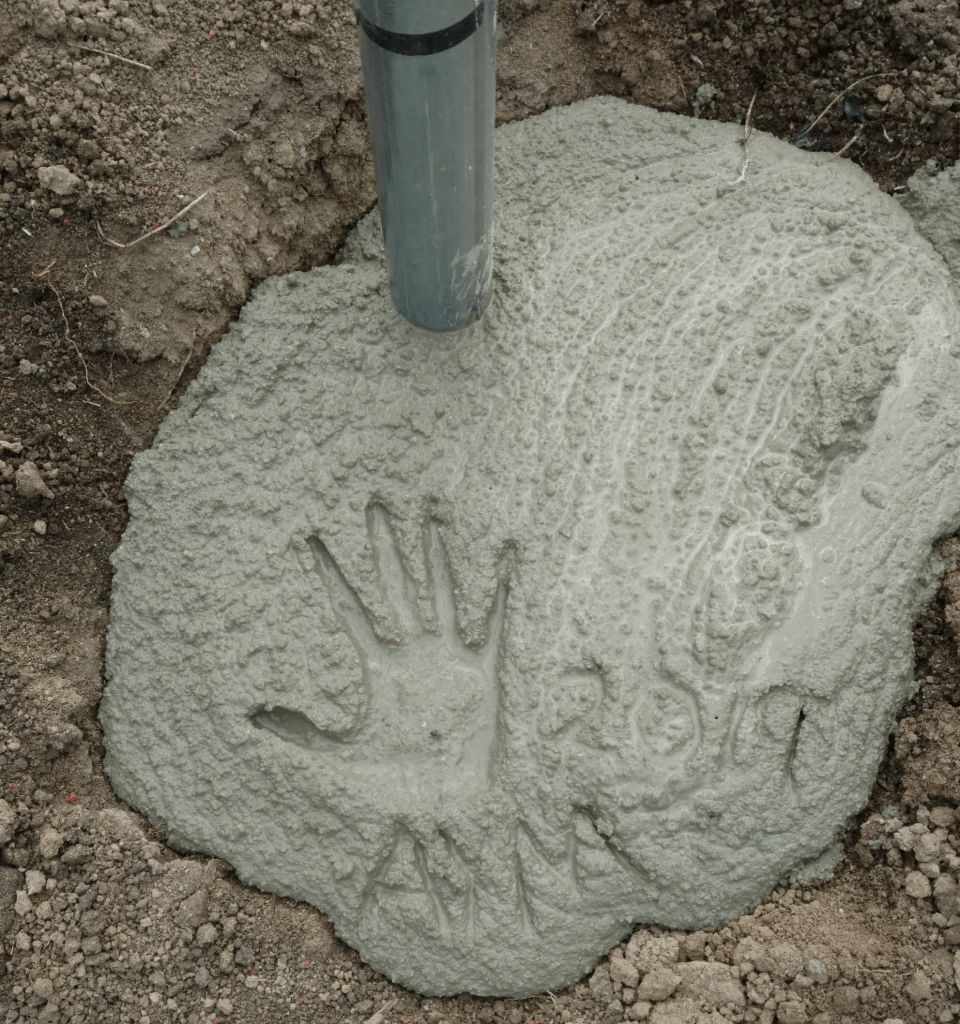 When I’m an old lady, I’ll remember the day I left my handprint in this cement. If I can still squint hard enough to see it.

I hope to fill the second hoop house with greens and herbs and edible flowers and root crops. 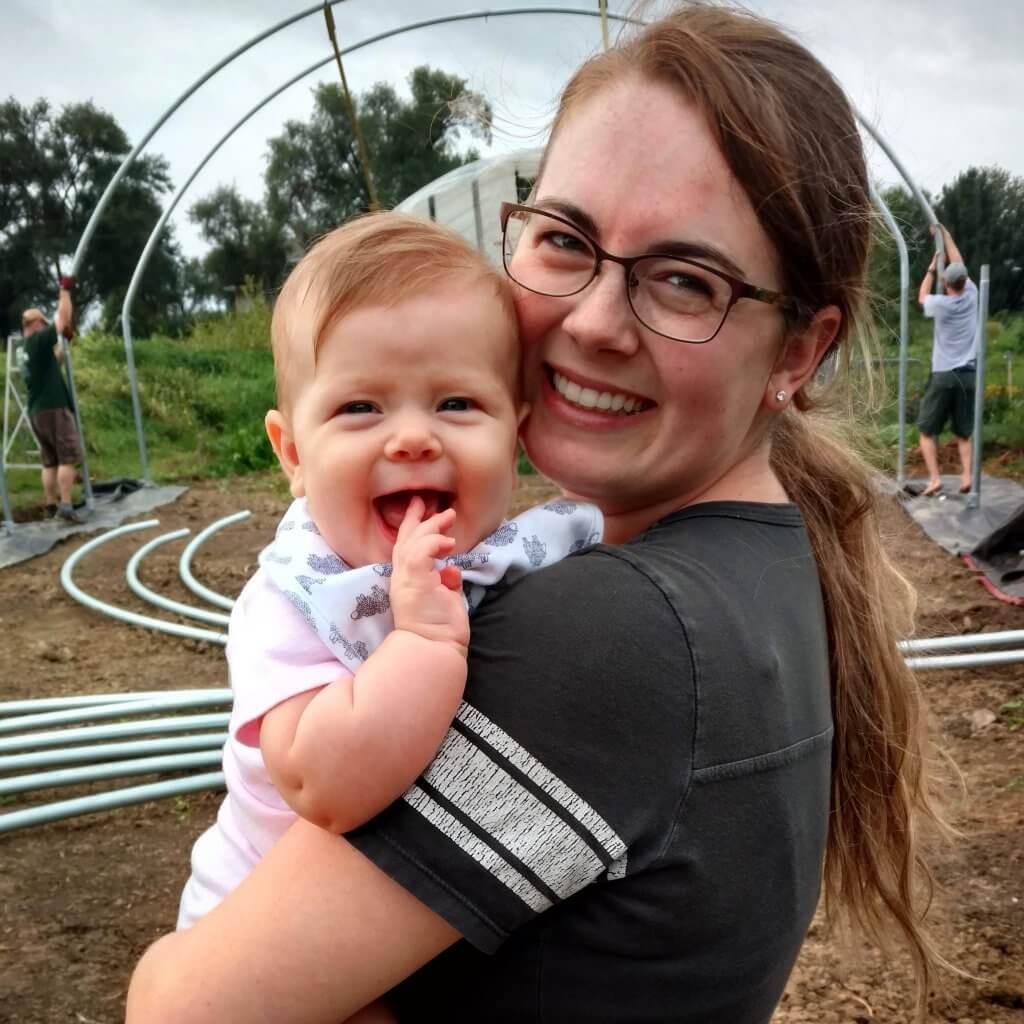 Here’s baby Emmy, held by her mama Catie, enjoying the fresh air at Amma’s house. In the background are her Opa on the left, and her daddy Timothy on the right, putting a hoop in place.

. . . Fifth . . . Yes! Can you believe it? My cup of Amma joy is full and overflowing . . . and my ninth grandie is due in a couple of months! Praise God from whom all blessings flow!

Except for this little note . . . with the changes in the weather, I find myself thinking about . . . of all things . . . Christmas! I like to have little projects in my hands in the house, when the evenings are longer. I have a lot of pretty things in my blog shop and I’ll be adding more things at the end of this month. (I’m trying to keep my Dad out of trouble, don’cha know?) So if you are also starting to think about Christmas gifts–whether for a loved one or for yourself–you will want to enter your email address into my mailing list (above, to the right) so you get a note about the new things! I’m pretty excited about them!!

Thanks for popping in, gentle reader. You make my life better, no question. I hope that feeling is mutual.

11 thoughts on “What’s Going On at our Place, this Fall Edition”