“Being brave is knowing something is scary, difficult, and dangerous, and doing it anyway, because the possibility of winning the fight is worth the chance of losing it.”–Singer/Songwriter Emilie Autumn

We have a fight ahead of us that is definitely not for the faint of heart. It takes bravery, it takes guts in abundance, it takes chutzpa . . . to tear your basement apart and then to fix it back up again. Don’t you agree? Especially our basement, if I may be so bold. I’m not talking about taking out walls or lifting the house up to dig a new basement underneath the house (oh, horrors!) or whatnot.

We aren’t quite that brave.

I’m just talking about removing wallpaper, pulling down lowered ceilings, dragging out wall-to-wall carpeting, pulling out old insulation and then putting something back that looks better. That’s all. Yet we’ve procrastinated on this job for some time, because we’re . . . basically . . . chicken. Bwaaaac, bwak, bwak, bwak! 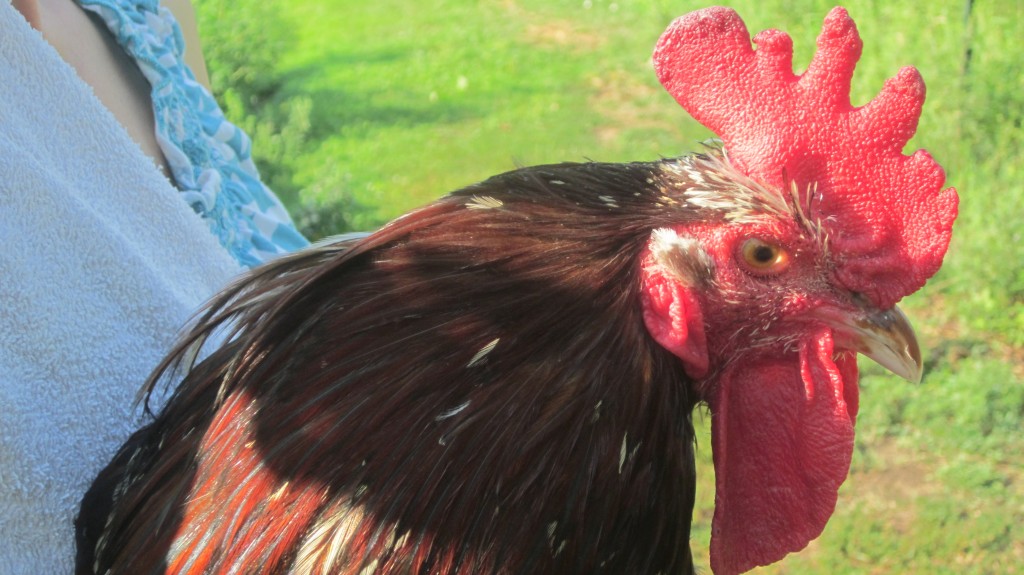 This guy is a little braver than we are right now.

Here’s just a bit of back-story, just a bit–well, I’ll try to keep it short!

We bought an old train depot, twelve years ago, that had been moved out into the country and remodeled into three apartments. That’s a whole ‘nother story in itself, but another time . . .  The first time we walked up the driveway to look at the house, my heart was quite full of what I was hoping to find.

This is what I had hoped for: swooping high ceilings, railroad antiques and depot furniture throughout, old-fashioned color schemes and battered wood floors (well oiled) and pressed tin ceilings. Some faded turquoise and gray, used together. You know, the way I would have remodeled it, had I moved an old railroad depot into the country and had an unlimited bank account, as well. 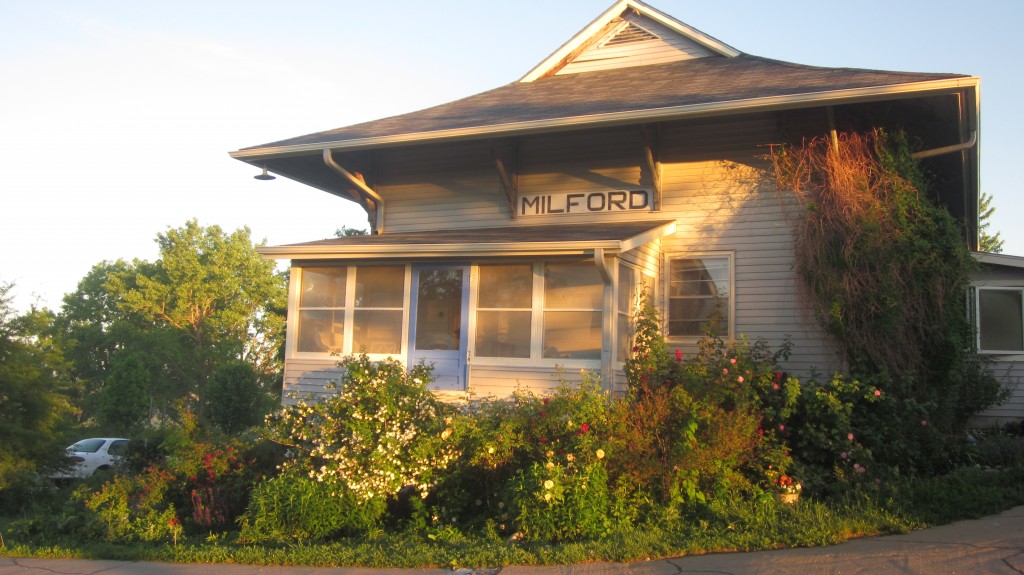 This is our place, in the flowery blush of springtime.

But what we found instead was the inside of a ranch style house from the 70s, times three, since the massive place had been divided into three very inefficient apartments. Lowered ceilings, flocked wallpaper, shag carpeting throughout, wall-to-wall carpeting in every room, in fact, including the kitchen and all six bathrooms, (yes–six bathrooms, Gentle Reader, and don’t believe that that has been a blessing!) golden sateen wallpaper with large birds on it, and wall-mounted candelabras in the bathrooms. Kitsch in every stinkin’ room: very large avocado colored spoons and forks hanging on the kitchen wall, clumps of rubber grapes on the tables, and many, many hanging clumps of ivy and dusty silk flowers. Lots and lots of the color mauve. Bathroom tiles on the (basically unused) kitchen countertop. Porchways and hallways and shallow closets everywhere. One sweet old lady lived out here at the time.

It was clean. It was pleasant. It was a disappointment.

Yes, Gentle Reader. Not at all what I had hoped. But it wasn’t all bad. The place was obviously well-built with good old wood (the original depot was built over a hundred years ago) and there was a sweeping attic and a decent roof and it was all clean and well-maintained. The setting was lovely, with several acres, and it was located close to where both our families lived. Although it was clumsy in the way it was laid out, and not the vintage showpiece that I had hoped for, the house was massive.

And–after living for 5 years in an uninsulated house of less than 1000 square feet in Iowa, with our then-five children, we were okay with its drawbacks. The massive part got us.

“You had me at Massive,” I might have said, if I had been in a romantic movie and the old depot was Tom Cruise.

So, we bought the place.

Now if we had been smart, we would have done what a lot of people (whom I admire very very much) do when they move into a new/old house: they put the other parts of their lives on hold and tear into the remodel and don’t stop until it’s done. Then they resume their prior lives and every day is full of peace and joy because their house is a place of order and indescribable beauty.

However. We are not that kind of people. (Sigh.)

Instead, we moved in and unfolded our cramped little selves and unpacked and spent our time planting an orchard, laying out my beloved gardens, planting several hundred trees and starting a home school drama group. We also built a chicken coop, a duck coop, and added plenty of fowl to our place, just because we didn’t have enough to do already. On top of all that, we had another baby, too. All those things take time and money and more time and more money. Afterwhich . . . there was precious little left of both to spend on the inside of our strange, puzzling, needy house.

Still, we’ve done some improvements over the years: we’ve installed two wood stoves; we’ve pulled down flocked and sateen wallpaper by the mile, and painted rooms. We pulled up the shag carpeting in the main part of the house, which revealed beautifully shabby fir wood floors, which we had sanded and refinished. We’ve put in ceiling fans and an attic fan, and we’ve done other things, too.

But we’ve always been afraid of the basement. When we moved in, the basement was carpeted with wall-to-wall plush carpeting, of a pale peachy-orange-type shade. It was lovely. It was lovely. Kind of. But raising six children, with many dogs and cats, to boot, in this house has taken its toll, especially on pale peachy plush carpeting. We also have had a number of water problems in the basement, such as the time when we had a gusher of a storm, dumping four inches of rain on us in a very short span of time, and quite a bit of it went into our basement. And the time that our dog Bea (of all people!) was rubbing against the outside hydrant, turned it on (only slightly) and it ran slowly for a day or two before we discovered it. 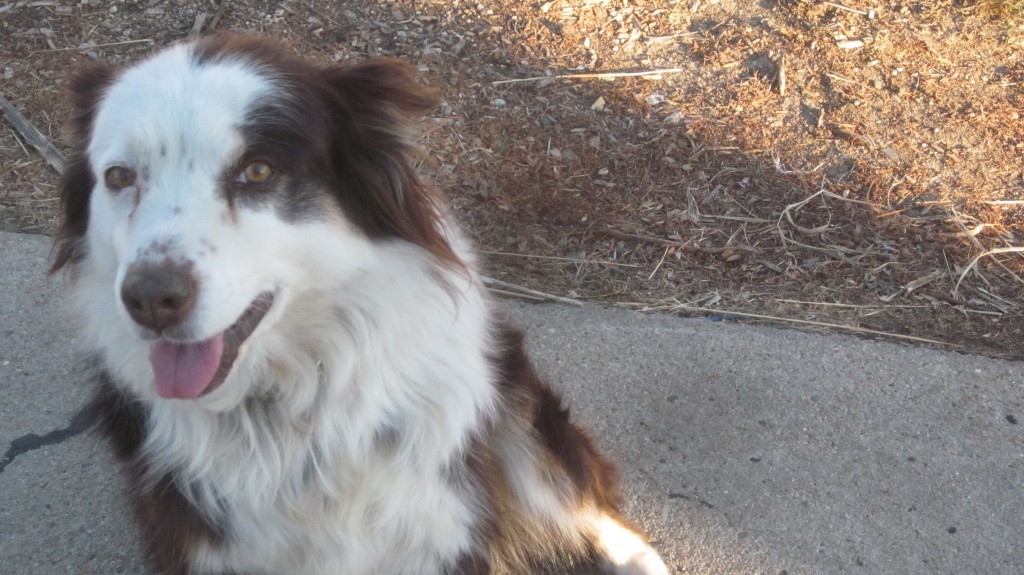 Did I mention that we were out of town at the time, and that it was the middle of a very cold winter?  The ground was rock-hard frozen, so take a guess at where all that water went? Yup. Down the wall and into our basement. Oiy. Puddles, Gentle Reader, massive puddles in the basement. Just so wrong. That was a mess to clean up. The carpet was old and stained and used enough at that point that we didn’t feel remorse over just cutting it up in strips (along with the sodden pad) and tossing it. But the floor has been bare cement ever since. Cold. Base. Cement.

I can just hear the guys who put up this ceiling:

First guy: “Should we hang it at every joint, then? Make it nice and secure?”

And top this, if you will: there were florescent shop light fixtures hung on the lowered ceilings (indignity upon indignity!). True confession: I hate fluorescent lighting even more than I hate lowered ceilings, if that is possible. I know that I’m picky and rigid about these things. Bryan didn’t know this about me, probably, when he married me so many years ago. Probably there are times (sigh) when he wishes he would have married a gal with enthusiastic fondnesses for all these things. Also, lava rock along the house foundations. Thankfully he has learned to live with these little quirks of mine. He knows that I hate anything faux: faux bricks, faux wood, faux anything. Gak.

I believe these quirks are aptly named “good taste.” By the way. 😉 No offense to you if you love lowered ceilings and fluorescent lighting, and even if you dote on cheap wood paneling for wall coverings, Dad, er, ah, that is, it’s a free country.

Bryan did away with those fluorescent light fixtures years ago, bless him, and put up some tasteful wall sconces, instead. He got tired of my piteous whining eventually, I guess. The nightmares. The moans. The sleepless nights.

And get this . . . I use those fluorescent light fixtures to light up my seed-starting tables every spring. Much better use for them, wouldn’t you say??

So. Jeepers! I’m sorry! This isn’t short at all. Oh well . . So. We are finally mustering up the guts to attack the basement. Hopefully in a few months we’ll have an attractive space with a finished floor (not sure what we’re going to do with that uncured cement, yet) and plenty of area rugs (wall to wall carpeting is a bad idea in a space that is prone to occasional water problems) and bright warm walls and not a lowered ceiling, nor a shop light fixture to be seen.

This is what we found underneath: beautiful old wooden beams and floorboards, and some ugly silver insulation (on just a part of the space). Plenty of electrical wiring and ductwork. That insulation? It scared me. 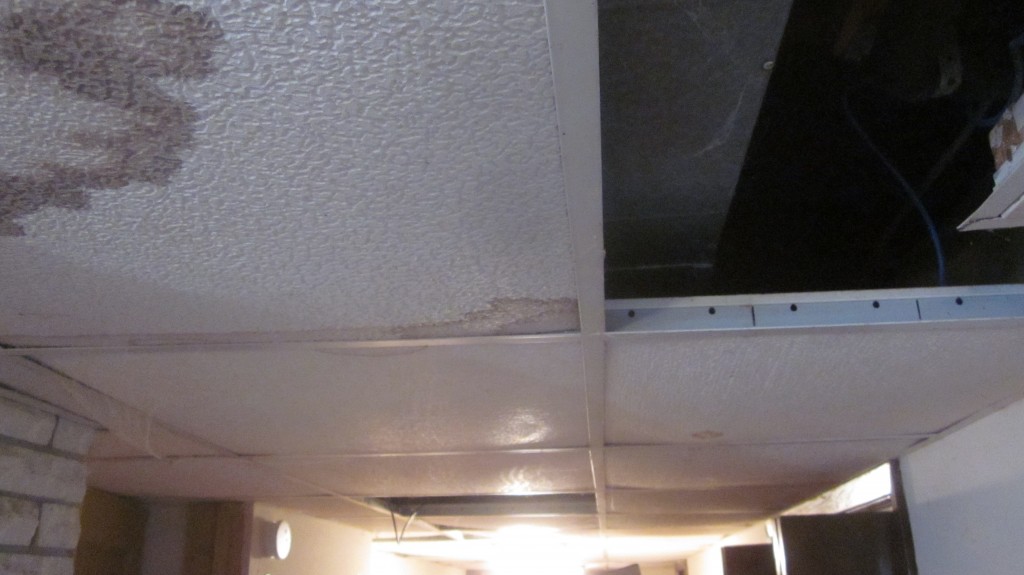 Here’s what we found underneath the lowered ceiling. This: 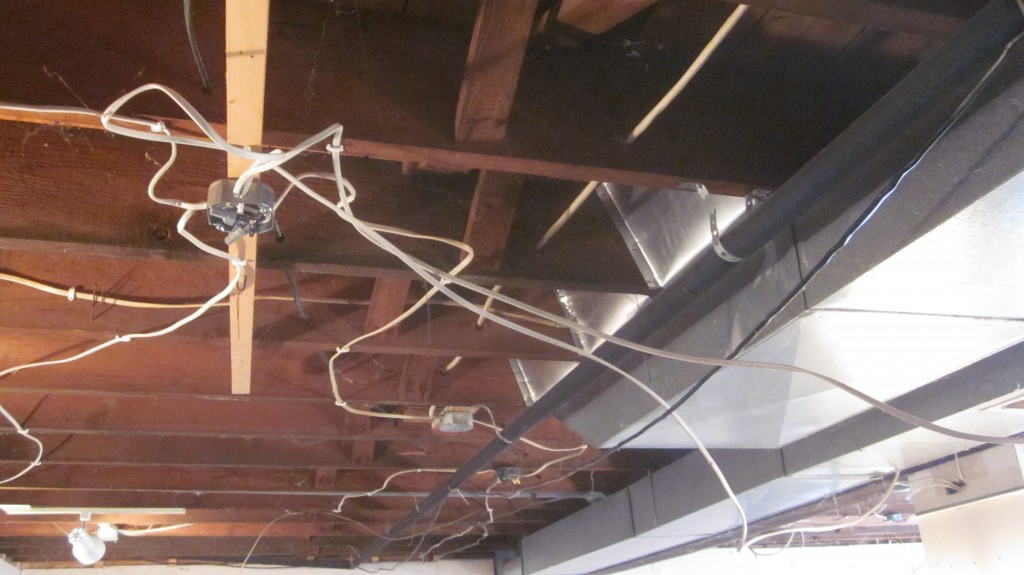 Lots of wires, all higglety pigglety and shiny ductwork. 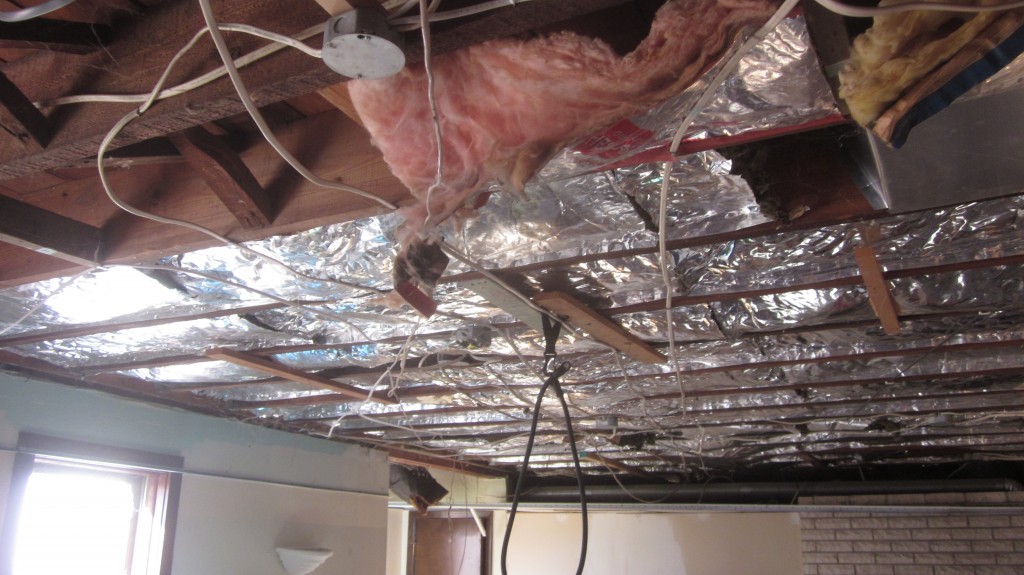 This is what I like so much: isn’t this old wood attractive?

Oh, Gentle Reader, I’ve done it again! I always promise you that I’ll try to make this quick and I drone on and on and I’ve already gone twice as long as I meant to, and I didn’t even get to the enigmatic writing we found. Not to mention the mummified mice!

I’ll tell you what . . . I’ll let you go for today, if you promise to come back next time to read Part 2. Deal? And hey, I wouldn’t mind it at all if you DIYers out there threw some help my way: have you uncovered a basement ceiling like this one ever, and what the heck did you do with it? Thanks so much, and I’ll see you next time!

Hey Guys!! I’m linking up with my friend Jill’s fun homesteading event at her website, The Prairie Homestead, and her awesome Blog Hop. Come on over!