My chickens surprised me this week. That happens, from time to time, believe it or don’t. Chickens–though they are single-minded eating and dust-bathing and bug catching machines–are apparently capable of creative thought, especially where food is concerned.

Are you surprised by this? Don’t be. Although I’ve kept a small flock of chickens for a good ten years (not the same flock, mind you, we have a bit of a rotation system that we employ) sometimes they’ll teach me something. I’ve learned, for example, that they like their grain much better if I soak it for a day or two before I feed it to them. The grains get bigger and plumper and will even sprout if I give them enough time.

You know, of course, that chickens don’t have teeth. Makes sense, doesn’t it, that they prefer their grains soft and chewy instead of hard and crunchy? They go absolutely crazy over sprouted grains, Gentle Reader. But that’s not the surprising thing.

Do you know about sprouting grains? It’s kind of a big deal (kind of like coconut oil and bulletproof coffee and kale) and there is quite a bit of chatter about it among people who take their food seriously. Some folks think that you shouldn’t eat grains at all because of potential health consequences, including digestive problems and even auto-immune diseases. Other people point out that grains are much better for you, and much easier to digest, if you soak them and allow them to sprout. That is a dramatic oversimplification, but if you are interested in learning more, my friend Katie over at Wellness Mama has written a very informative post about the whole deal. Some people don’t care what anybody says and eat as much bread and pasta and cakes as possible. But I’m not referring to them today.

I’d lay all this grain nonsense out for you myself, but I know that you’re just dying to know how my chickens surprised me this week, aren’t you?

Of course you are.

Okay, okay, okay (sigh) I’ll get to that, but first a word about winter feeding. I buy a prepared chicken feed from our farm store which I offer to my chooks (by the way–an Aussie friend of mine calls her chickens “chooks” and I like it so much, I’m going to do it, too) as a supplement to whatever else I throw them. I wrote more about my winter feeding regimen in a guest post that I wrote for my lovely friend Jill at The Prairie Homestead, if you’re interested in my complicated (not really) winter feeding techniques.

I used to drive to the Farmer’s Co-op in a nearby town and buy a trailer load of cracked corn about twice a year, because I thought it was the only grain available in our area. But then, our chickens started to have health problems that I suspected were a result from eating all that GMO corn. Consider the poor hen Phillipa, for example, who had an egg stuck for days in her . . . well, she was quite uncomfortable and it took quite a bit of time and effort and bottom-soaking sessions to get the egg unstuck. I also had a few miserable hens who developed prolapsed uterus, and we had to put them out of their misery because there was just no cure for that.

Since so many of our health problems, as humans, point to poor diet choices, I suspected that the local GMO corn was just not a good grain to feed to my chickens, and was, in part, leading to these health problems. Plus, we’ve been trying to stay away from eating GMO products ourselves; so what was the point in feeding them to our chickens, who were providing eggs and meat for us? Exactly.

I found a source of organic grain that was only an hour’s drive away: “screenings,” from an organic grain store, which (not counting the cost of the time and gas to go fetch them) didn’t cost much more than the GMO corn. So we went and bought 1,000 pounds of mixed organic grains for my chickens. Because many of the seeds in the mixture were quite small, I started soaking them for a few days before I fed them to my chooks. It kept them from blowing away (the little seeds and grains, not the chickens, who are quite full-figured) (although, honestly, if any wind could blow away my hens, it would be the wind in our little corner of Nebrask), and the chickens gobbled them right up. I liked the way they plumped up (again, the grains). I knew the chickens were actually getting more food.

And guess what. I’ve not had a single problem with egg-binding or uterus prolapse, or even a sick chicken, since. My left-brained husband would assure me that this is anecdotal, and I know that, but still–my right-brained self will go to lengths to avoid having to soak another hen’s bottom in warm water for days on end. You’re with me, aren’t you, Gentle Reader? I’m not a researcher. I’m a chicken mama, and that’s good enough for me. And obviously good enough for my hens.

I could write an e-book about all the things that I’ve learned about raising chickens (or chooks) in the past decade, and I’m talking about things I never read in a book or even on a website. Title of e-book (watch for it!):

Anyway. I had a handful of cobs of dried corn that I had saved back for my chickens. I do delight in throwing them something good for a treat, and it had been months since I had had any corn to give them (they do love corn). I’ve ordered some GMO-free corn and will get it soon, and that’s what I’ll feed them through the winter. 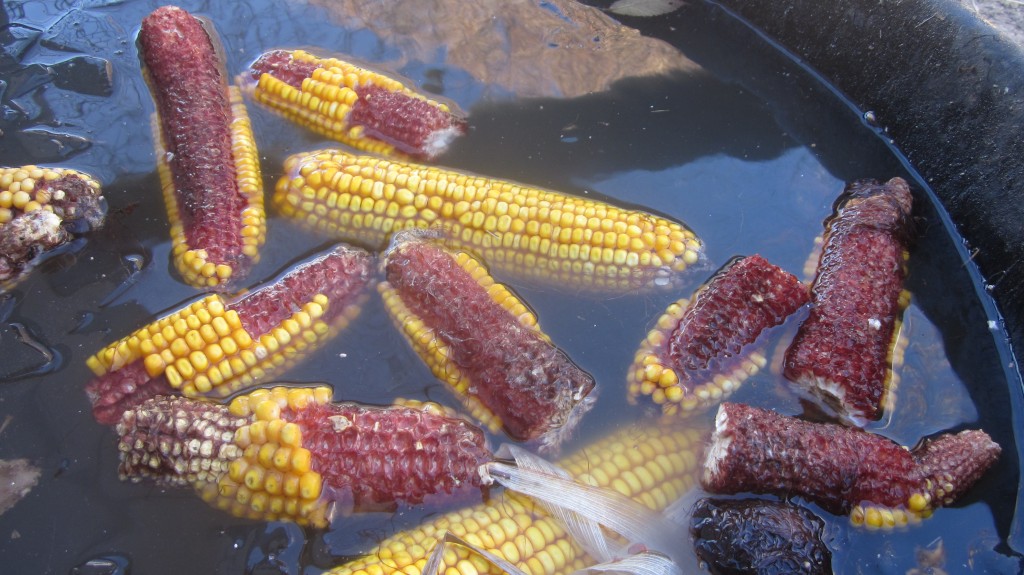 I just knew that they wouldn’t be able to get those hard dry kernels of corn off the cobs without my shucking them (some more of that secret knowledge, borne of public experience), and I was way too lazy to do that (that’s not secret knowledge, it’s common knowledge) (besides, it’s murder on your manicure–kidding) so I tossed the cobs into the big rubber bucket that I keep filled with water for our goose, Lucy, to bathe in.

My goose Lucy definitely gets way more indulgent baths than I do. But you didn’t need to know that. I keep mixing up secret knowledge and public knowledge. Sorry.

I thought I’d let them soak for a day or two, and then fish them out (the cobs).

I wasn’t prepared for what happened next. Here comes the surprise, Gentle Readers. Are you paying attention? Are you sitting up straight? Take a deep breath. Have you brushed your teeth yet today? Are you quite ready? Those chickens–regardless of the fact that I was sitting right there– immediately and without qualms hopped up on the edge of the rubber bucket and started pecking away at that dry (actually it was wet by this time) corn on the cob! It was amazing! I was so glad that I happened to have my little camera in my pocket, because I snapped away, the whole time really amazed that they were doing this thing. Their hard little beaks just popped the corn off the cobs like crazy, the water splashing about, each one competing for a better spot on the edge of the bucket.

Gosh, thought I, I didn’t know they could do that! And then I started thinking about chicken Halloween parties, and how they must, just must bob for corn-on-the-cob, not apples, because clearly these gals had done this before!

Now isn’t that surprising?  Here are a few pictures of the event, just to prove to you that I am completely not making this up. To wit: 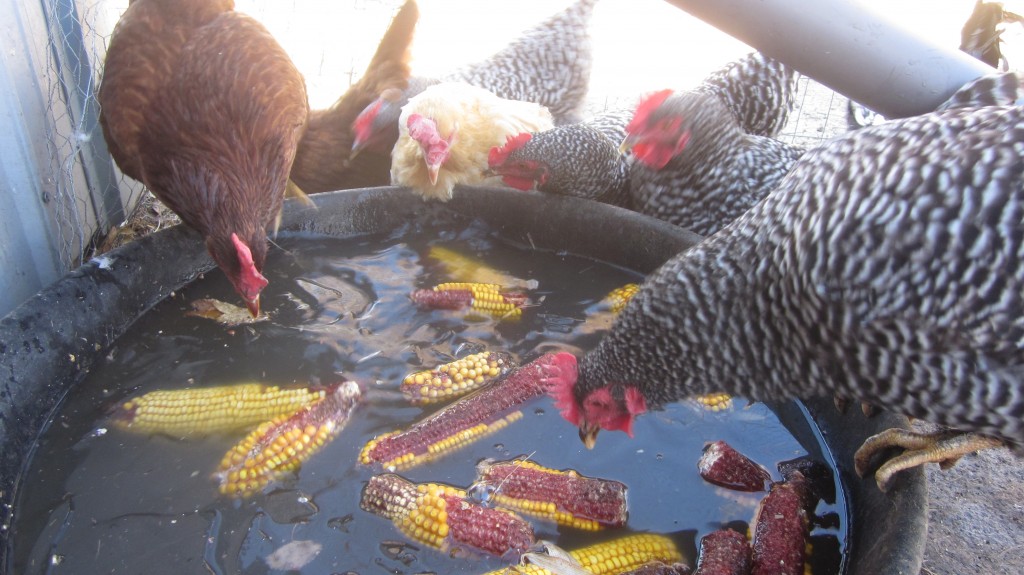 “What’s that? Bobbing for corn on the cob?? Awesome!” 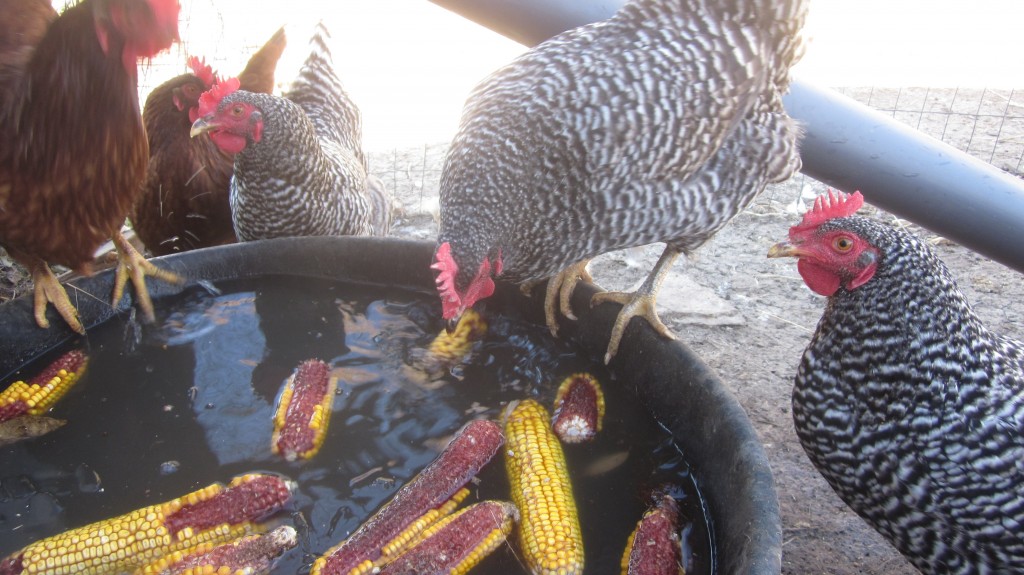 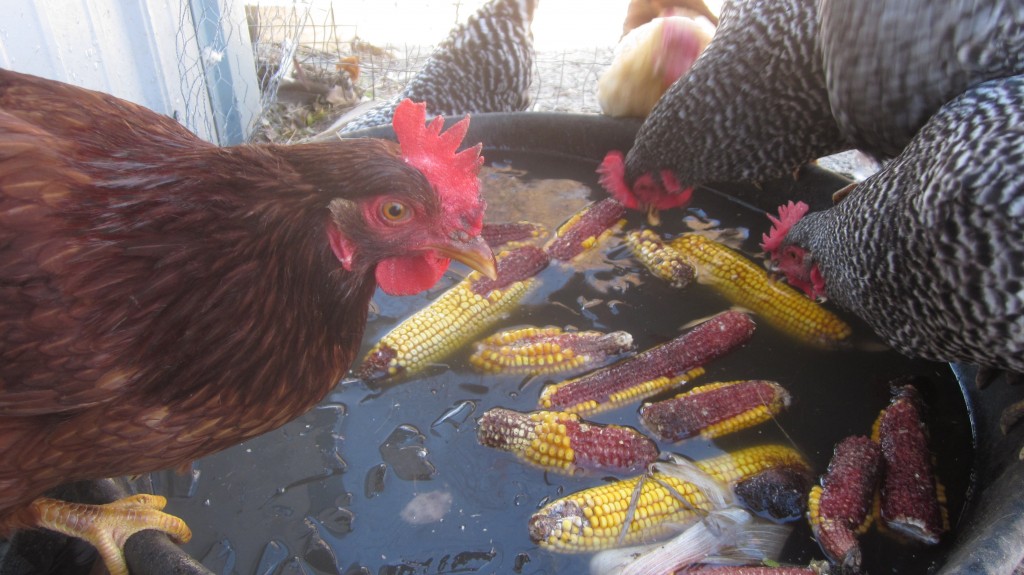 “A competitive and hungry chicken knows no fear.” That’s the kind of quotable quote that you get here at vomitingchicken.com, and hey, it’s free! 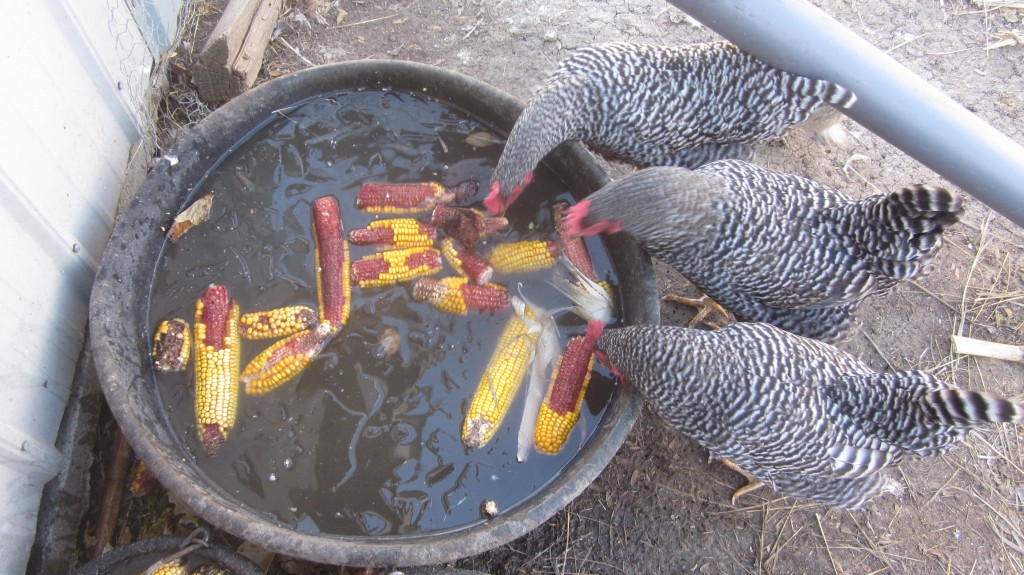 By the end of the day, the cobs that didn’t eventually sink to the bottom of the bucket were bare. Now then. Isn’t that surprising?

I’ll be sharing this post with the Blog Hop over at The Prairie Homestead, and also with Frugally Sustainable, as is my wont. Come on over and have some fun and learn bunches from hundreds of blog posts, as may be your wont!

If you enjoyed this post, or learned just a kernel of goodness from it (hehee, sorry) perhaps you’d like to share it with your friends? I’m trying to build up my readership and yes, you may help me if you like! I’ll be forever grateful and you’ll know that you’ve done a good deed today! Just push one of those little ole’ share buttons–Facebook is good, any of the others are great, too, and thank you!

24 thoughts on “Surprising chickens: bobbing for corn on the cob, and winter feeding tips”