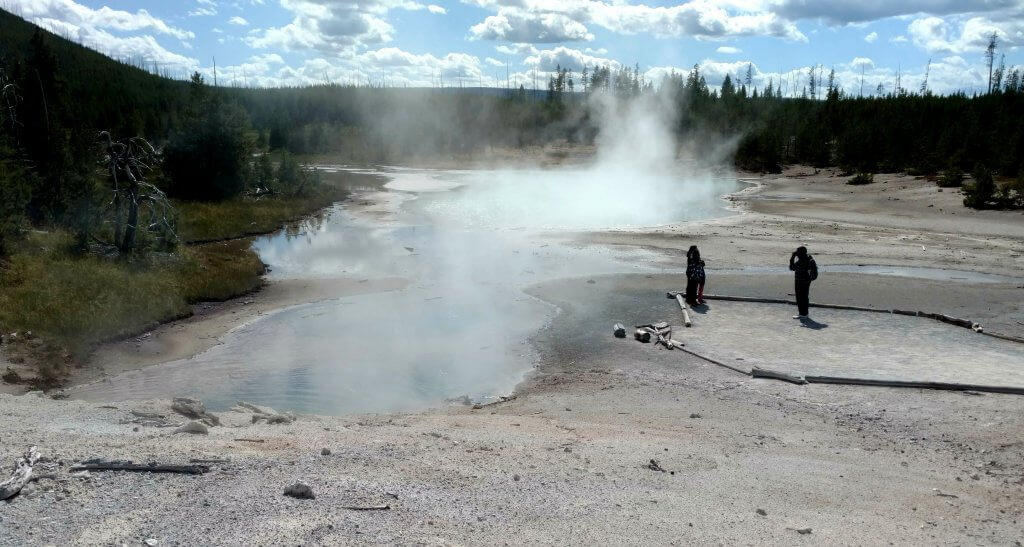 Bryan, Mack and I took a week off from the farm, the chickens and the weeds and went camping in Yellowstone National Park. It was wonderful. *siigh* It was breathtakingly beautiful, and I wish we would have had more time there.

I confess that a time or two it struck me as odd that we were ogling (and we did ogle) and marveling (ditto) and snapping pictures (also, did it) like crazy people, at something that could–within the next thousand or ten thousand years, they say–destroy everything and everyone in the area.

The earth–and my life–will end when God decides it is to end, however, so since I don’t really believe that I have much to do with it, I don’t feel fear of the massive and mysterious Yellowstone caldera. In short: I can’t do anything about that bubbling, steaming, sulfurous, sleeping giant. So, enjoying and studying and marveling at it all seems natural.

Have you been there? If not, why should you go? So. Many. Reasons. Here are just a few, off the top of my head.

1. To see the largest geyser on the planet.

Never mind Old Faithful. (Okay, do go see her but also search out the many other geysers in the park.) Get your feet wet (figuratively speaking) with Old Faithful (which erupts about every ninety minutes), but go on to watch the drama of the Castle Geyser, and the awe-inspiring size and complete unpredictability of Steamboat Geyser, which captured my attention entirely. 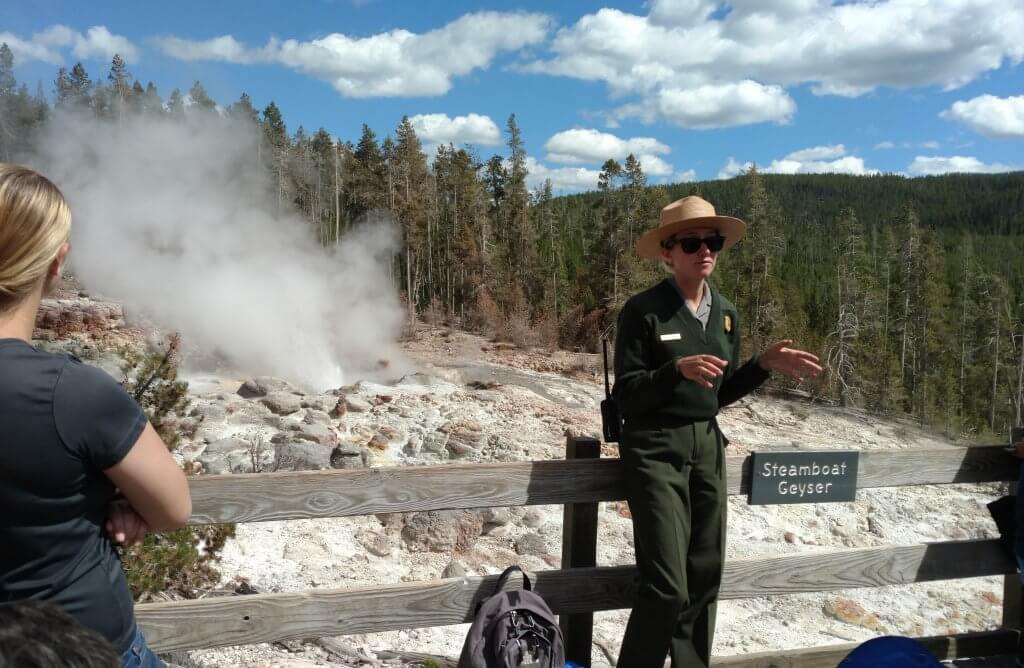 A few facts about Steamboat:

2. One word: the animals. And the birds.

While we here in Nebraska do see puh-lenty of deer, coyotes, bobcats, and in the winter time we see mountain lion tracks on the snow covering our pond, we no longer (*sob*) are privy to bison sightings (fyi, this is a buffalo) and of course wolves and bears are not animals that we get to see on a regular basis either.

But you can see these animals–and many more–roaming free at Yellowstone. If you go, this seems to be the best way to actually see them:

We did not see bears and wolves, but this is what we’ll do the next time we go to Yellowstone.

Fun fact: Yellowstone is home to the largest concentration of mammals in the lower 48 states. Yellowstone’s wildlife is abundant and diverse with an estimated 300 species of birds, 16 types of fish and 67 species of mammals — the largest number of mammal species all in one place in the contiguous United States. The list of mammals includes grizzly bears, wolves, lynx, fox, moose and elk. Cool, huh?

Hello. It’s perched on top of a Supervolcano! (Not only a supervolcano, but the largest supervolcano on the planet!) 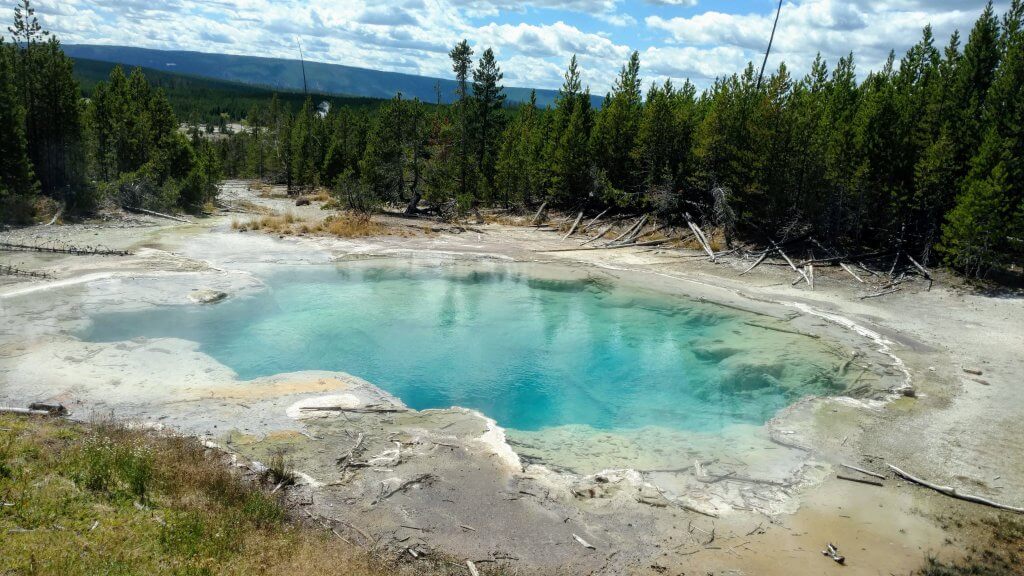 We sat and waited for a long time to see Castle geyser erupt. While we were sitting there, Bryan (he reported this later) couldn’t help but overhear a young boy from Britain question his mother about American politics. “Mum, is America a dictatorship?” he asked. She then tried to explain how democracy worked to him.

We discussed this with Mack later, agreeing that if America was a dictatorship (God forbid) Yellowstone National Park would likely not be open to the public, available to all for a very nominal entrance fee, but would probably belong to the dictator himself, who would have a summer palace there (again, God forbid). He would have lavish private parties there and there would be tales (mostly unbelieved) whispered about the wonders of that place.

I applaud the decision of the U.S. Congress to establish Yellowstone as a national park on March 1, 1872. I further bow to the wisdom of President Ulysses S. Grant, to sign it into law that it would be the first national park in the U.S. and in the world, too. I curtsy with gratitude the U.S. Park Service that has done such a lovely job of running the place. It’s clean, well-run, and intelligently stewarded (now that they no longer allow the feeding of the bears!). The history of the place is very interesting indeed.

And, by the way, the widely-held assumptions that a supervolcano erupting would mean a. as big an eruption as in the past, and b. all life for hundreds of miles would cease to exist . . well, those tales just aren’t necessarily true, apparently. Here’s more if the subject of supervolcanoes is one you’d like to learn more about.

It would make a very interesting Dystopian novel though, don’tcha think?? Or maybe a series of novels . . hmm . . . a pleasant yet rather ordinary family from the Midwest, camping at Yellowstone without adequate warm gear, gets caught in a terrific storm of fiery magma! “Okay, so I complained about being cold . . . but I don’t mind! I don’t mind!” the unwitting farm woman cried. How do they survive the eruption of the largest supervolcano in the world and manage to get home in time to shut the chickens in that very night? Buy this book to find out!

4. The beaches. And the hikes. 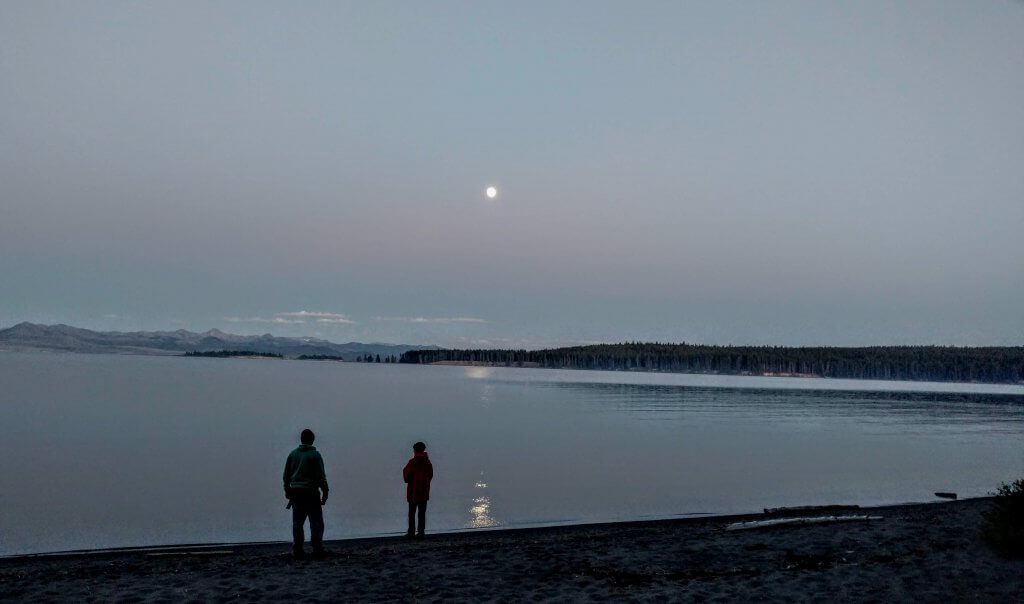 Okay, I cheated on these two and made them one category.

There are hikes for everybody . . . older folks with bad knees (cough) can enjoy shorter, less-challenging hikes, and younger folks can bound up mountains of rock or really get back into the wilderness for an entire day of exploring. We did both, since Mack with his boundless energy and two great knees, wasn’t going to be held back by his decrepit and practically-senile parents. More power to him.

Yup. Mountains and beaches. Basically the opposite of Nebraska.

Yellowstone Lake is one of the largest high-elevation lakes in the U.S. and is centered over the Yellowstone caldera. It is huge and quite beautiful and has beaches of strange black sand, interesting rocks and pebbles. Mack and I both regretted not carving out more time to explore some of the beaches, which were very close to our campground.

Next time, Mack. Next time.

5. Vacation community of the world!

It has been awhile since we’ve gone on a vacation. Life gets so busy and sometimes we forget how much fun it is to mix with other cultures and communities. I remember now how easy it is to talk with other people and make friends while on vacation. You’re not in a hurry (ideally!). There’s no rush to get home and get work done.

For the afternoon, your most pressing matter is to wait until the geyser erupts. So, as you sit, you have the time to take an interest in the Eastern Indian family sitting next to you, close enough to hear everything they say to their children. And to notice that–while you don’t understand the Indian language, you do understand everything the children–who speak in American English, without a trace of an accent—say.

Same with the French family who don’t realize that you can understand most of what they are saying (thank you dear Mr. Spirk, my high school French teacher). You are entranced by the little girls from Beijing that you meet in the bathroom line, and you feel kinship with the pretty red-haired young mother in the campground bathroom, pulling every layer of clothing that she has on her two little girls before bedtime. (We weren’t the only ones in the tenting community who weren’t prepared for 30 degree nights!)

It’s just pretty cool how many cultures we saw represented in our three-day stay: Chinese, Netherlands, Britain, Middle-Eastern, Japanese, Dutch, French, and so many others.

6. It’s History and Science and Nature study all rolled up in one. 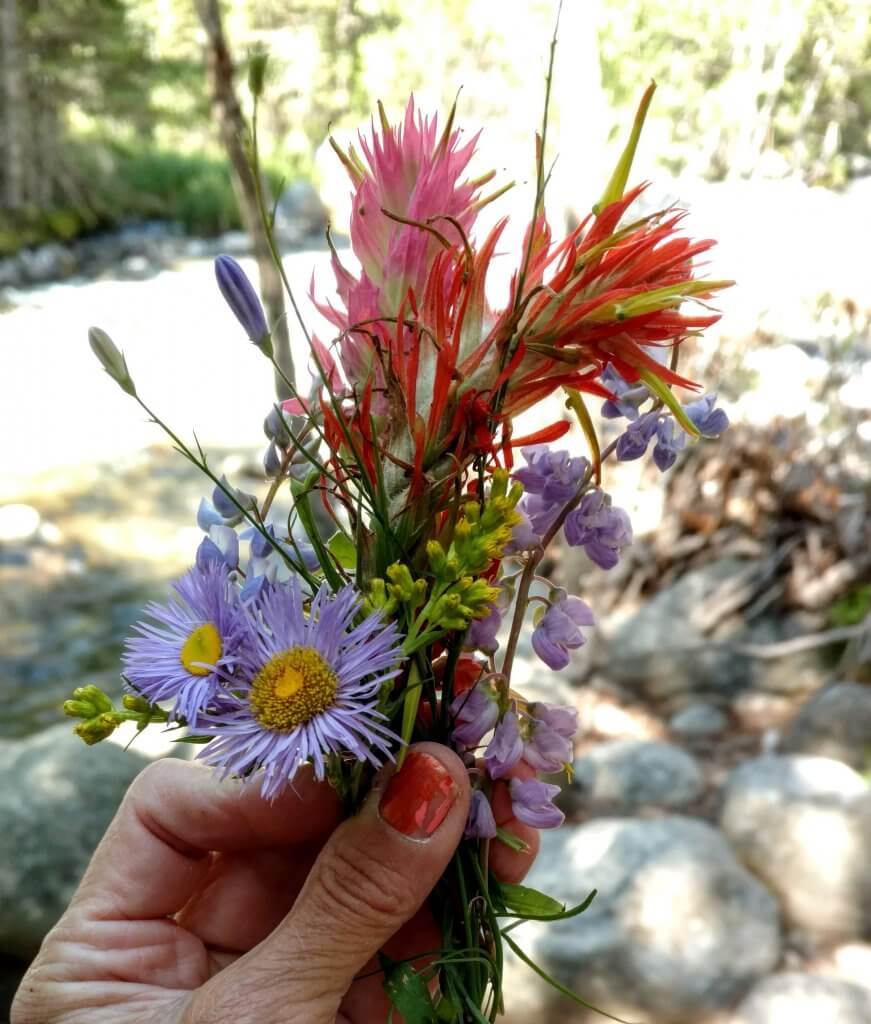 Author’s note: I did not pick these flowers at Yellowstone, which is illegal, I believe. I did pick them on private land in Wyoming, though, and there are the same types of flowers in Yellowstone.

It’s nearly time for Mack and me to start up Excelsior! Home School, so I’m up to my earlobes in books, lesson plans, and ideas. Studying all about Yellowstone is going to be part of our History study . . and science. . . and nature! Spending a week there with nature journals, cameras, sketchbooks, etc. would be a dream! . . . just sayin’, homeschool ‘rents.

7. It’s a good excuse to shop for some cool camping gear.

(Affiliate links ahead, bywhich you know that if you click through and buy something, you’ll be helping me support this blog and all its nefarious activities, just so you know! 😉 )

When Bryan and I started planning this vacation, Mack didn’t stop smiling for a week. And the first night we rolled out our sleeping bags in our (cold!!) tent, and piled the extra quilts and blankets on top of us, I turned and looked at Mack, and couldn’t stop smiling myself. He had the biggest grin on his face, so cozy underneath his mountain of quilts.

“I LOVE camping!” he enthused.

That’s worth a lot, coming from a newly-teenaged boy. Wouldn’t you agree?

That’s it for now, gentle readers. Thanks for checking in.

Did you take a vacay away from home this year? Or two? I’d looove to hear about what you did, where you went, and what was worthwhile about your travels, in the comments below.

And, a favor: if you’ve enjoyed this post and have a friend who might enjoy it too, please share. It’s easy, takes just a second, and means the world to me. (Thanks so much!)