(Wanna read this entire saga from the beginning?  Here is where you start.)

We had not had any adverse attentions to our chicken flock for several days in a row, or at least we weren’t aware of any. It had been quiet–perhaps too quiet. I’d been catching up on my sleep at nights.  I was healthy again.  We’d been diligent about our careful chicken-shutting-in procedure at dusk every evening, to discourage the critter from ever slipping into the chicken coop again. But I just knew that he was watching, and waiting for us to forget, just once.

“All it takes is one time . . .” he was thinking, I was sure of it.  The air was ripe with potential carnage. Not to mention, it was also stifling with the overpoweringly starchy sweet smell of the GMO corn which surrounds our place, which gets stronger and stronger as the summer wears on.

But, back to that Dreaded Varmint:  we hadn’t forgotten the chickens he had killed and the damage he had done, and we planned one last offensive in this battle.  We decided to take a bold and risky step:  we’d bait the humongous live trap with a live rooster. 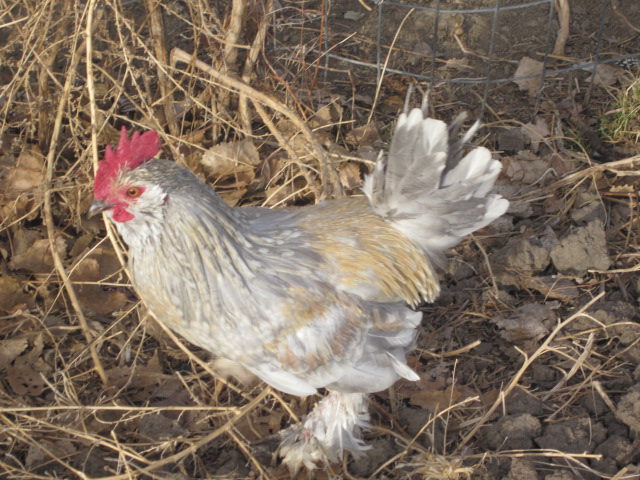 This is Sir Galahad.

This is not as cruel as it sounds, Gentle Reader.  The trap has an ingenious device: a small cage inside the trap, but separate from the bigger compartment, whereby we can place our least favorite rooster (Sir Galahad by name), who will hopefully make enough noise to bring the Dreaded Varmint out of the corn, where he’s skulking, obviously. No rooster will be harmed in this experiment, so don’t worry.  (I can tell you are wondering why he is our “least favorite” rooster.  That, my friends, is another story.)

Hope springs eternal, and we hoped to catch the varmint that very night so we could breathe a little easier. 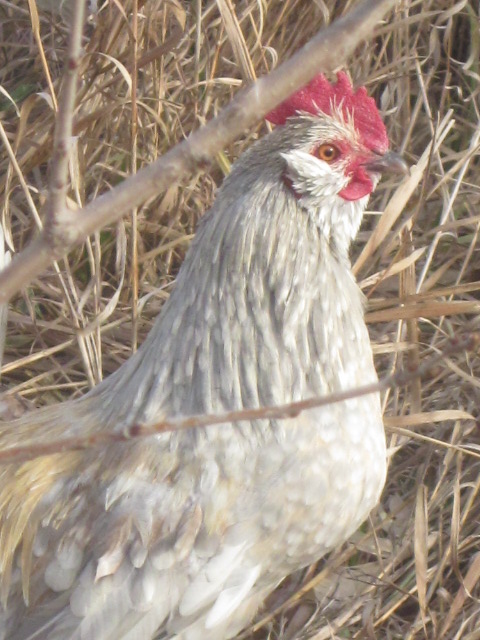 Sir Galahad, as seen through the weeds. He was suspicious of my following him to get this picture, and kept skuttling away. You can see that he’s a very intense little fellow.

The next morning:  Early morning in the summertime at our place is a joyfully noisy time and place.  Cats are meowing for breakfast; Little Red (the hen who climbs up into the vine on the house to roost at night) clucks noisily as she chooses her breakfast; wrens sing gaily; blue jays fight and squabble; and this particular morning . . . Sir Galahad is crowing, intent on letting the entire world know that he is not, thank you very much, staring death in the face. 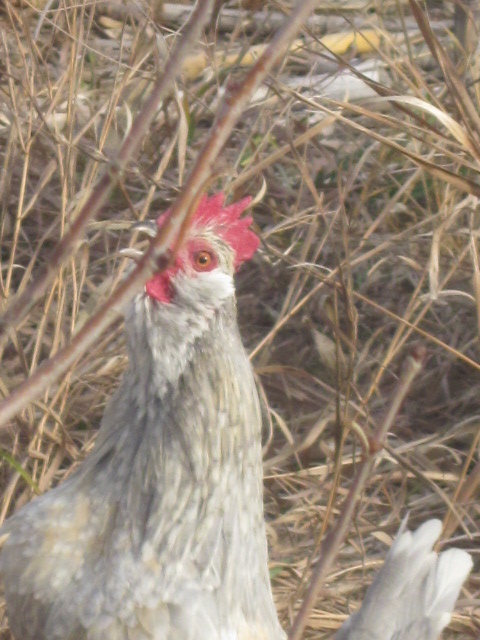 There is no hungry carnivore entrapped in the giant live trap next to him, he seems to be saying. Though his heartless owner used him as bait in her quest to catch the Dreaded Varmint . . . the durn pest ignored him completely.