During the course of several weeks this summer, our chicken flock was harassed and stalked by a predator, at least one, that is.  He–or they–killed several chickens before we got ourselves in gear and actually launched a full-out offensive.  I started chronicling the entire experience in short Facebook posts.  I’m going to share them with you now, over the course of the next couple of weeks, and if you keep chickens and are bedeviled occasionally by ravenous predators that  have designs on your defenseless fowl, maybe you can learn from our experiences.  If you don’t keep chickens, maybe you’ll enjoy reading about our experiences, anyway.  And your heart may swell with gratitude that–though you have problems, too, of course–you’re not going to bed at night wondering if your chickens are going to wake up in the morning with or without their dear heads.

As Dr. Seuss would say “Just tell yourself, Duckie, you’re really quite lucky!”

Backstory:  I was getting pretty aggravated.  For the past several mornings, I had found evidence that some varmint was messing with my chickens.  Though I shut the fowl in at sundown without fail, there were a few foolhardy renegades that would hide from me when it was bedtime.  The varmint appeared to be picking them off, one by one.  This is what I would find:  in the chicken yard or near to it, first thing in the morning, a pile of sweet, downy feathers, moving slightly in the breeze, some in clumps attached to bits of skin.  That was it.  Pretty obvious evidence of a Dreaded Varmint at work. 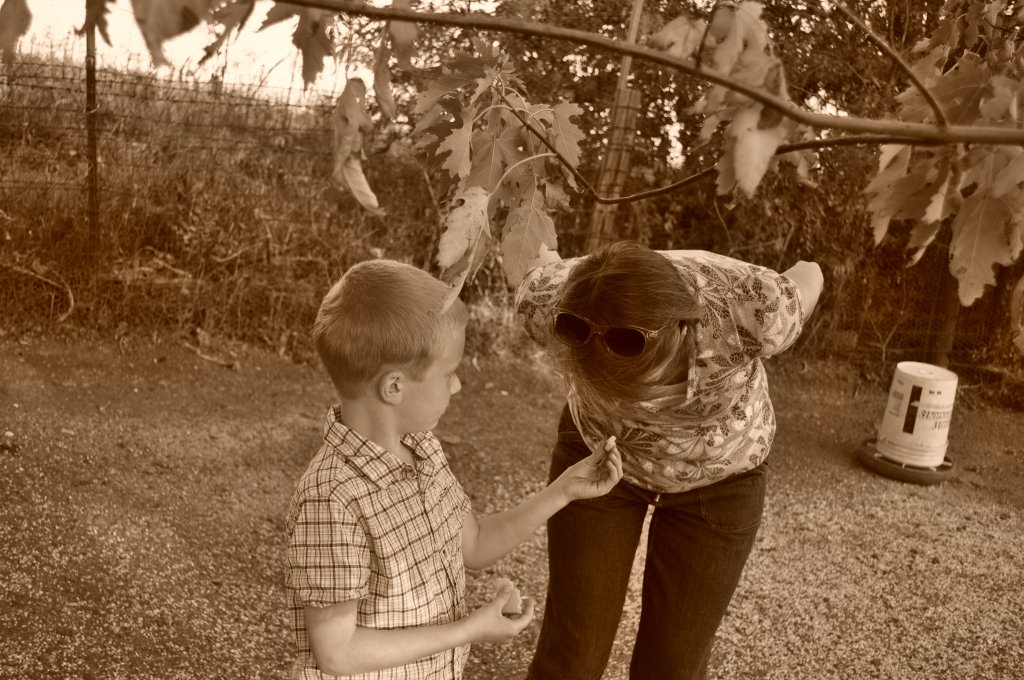 Little Mack and I check things out in the chicken yard.

This was alarming, but I was hoping it would just go away.  But the day that I discovered the dead and thoroughly chewed-up chicken near the garden one morning, I decided that I had to do something, already.  No use merely wringing my hands over this.  Time for action!

I do not own a live trap–or I didn’t at the time.  I don’t want to use a trap that will kill, since we have several beloved farm cats.  But my brother Matt offered to loan me his live trap, so I took him up on that offer.  I also decided that the next time I went to the farm store, I needed to buy myself a live trap.  Frankly, I don’t know why I hadn’t yet, except for my natural stinginess.  But I think if you raise poultry, there are times not to be stingy.  This, perhaps, was one of those times.

Anyway.  Malachi was excited and full of questions about the procedure.  He trudged out to the chicken yard with me at sundown to set up my brother’s borrowed trap, and offered his expertise on the bait placement, the cage placement, what probably was going to get caught, etc.  He checked the cage with me before we went to bed (he is the “keeper of THE flashlight” in our house) and offered to get up with me in the middle of the night to check on what we caught.  I assured him that it was more likely that we’d catch the nasty varmint if things were very quiet out there, and if we were sound asleep in our beds the entire night.  Especially him, since he could be so loud and terrifying during the day.

He liked that. He is a manly boy, you know, which I love. He never has less than two weapons on his person.  We endorse manliness here in the country.  We couldn’t do without it, truth is.  Lately (to his great disgust, I won’t let him carry a sharp knife yet) he has pinched the good plastic guard that belongs on my good pair of fabric scissors (the one that my dad, in pity, gave me one Christmas because my fabric scissors were so dull and pathetic) and which he thrusts into his belt, in which he sticks the sharpest butter knife I have.  That’s what he carries.  He’s disgusted that it’s not a real knife, not even a sharp one, but he’s biding his time until I relinquish that control. 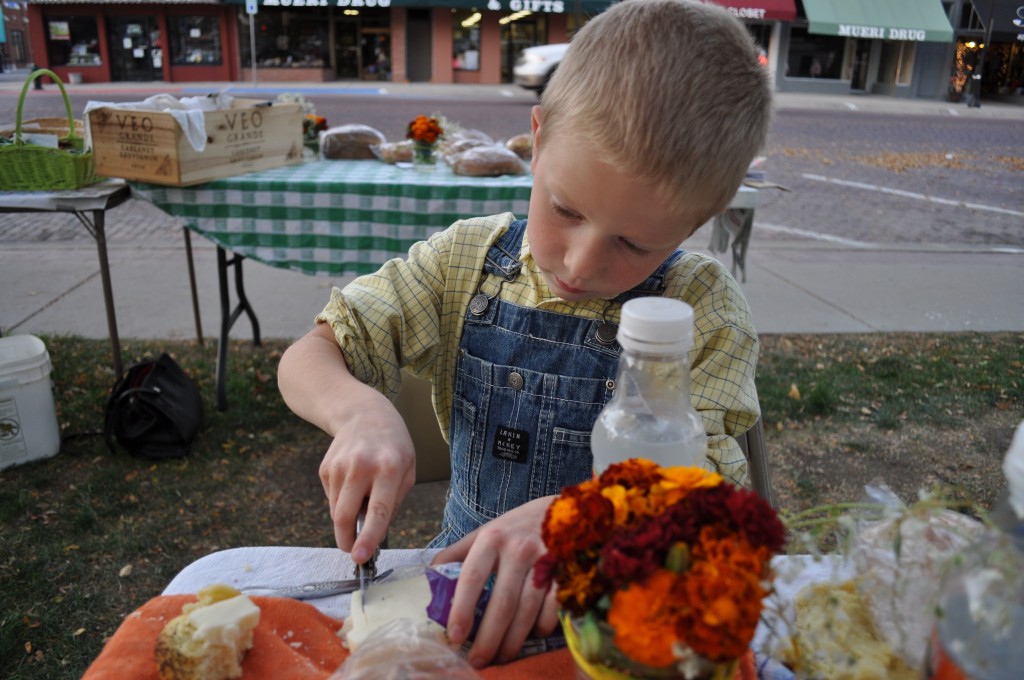 Here my little man takes on the task of slicing the cheese (with Grandma’s pocket knife) for our market lunch.

Every evening when I ask his thirteen-year-old sister Amalia to trudge out and shut the chickens in for the night, he grabs a weapon of some sort, his treasured flashlight, and his dog Ollie and they go to make sure that Amalia is safe. Isn’t that how boys should be, after all?  Someday (not too far away, mind you) he’ll be responsible for helping his Dad and me through our dotage (bless him) and it will certainly be best if he is strong and mighty and brave, as that will be a task that will demand might and strength.

In our conversation, I was uncomfortable when Malachi asked what we’d do with the varmint when we caught him.  At this point, the varmint had killed at least four chickens that I knew of.  Yes, this is a live cage, but I sure am not planning on a catch-n-release program, here.  I will politely request that Bryan blow the thing away upon capture, and he will do it, like any country gentleman would.  Any country gentleman, that is, who loves his wife and puts up with her critters.  But I wasn’t going to tell my six-year-old son this.

“What do you think we should do with it?” I used the oldest trick in the book to avoid answering an awkward question.  I turned the question around.

“We should tell Dad to shoot it!” he said, robustly.

I didn’t sleep well that night–I was so excited that we were about to take care of the finding-dead-chickens-in-the-morning problem–and Bryan was up and around first, and so he was the first to check the trap.  Hmm.  The open can of tuna that we had used as bait had been carefully slid off the hinged platform that would have triggered the trap to close, and then neatly emptied of its contents.  Then Bryan reminded me of what my brother had suggested:  that we only open the can so far, not all the way, and perhaps wire it to the platform.

I didn’t remember Matt saying that.  How did I miss these instructions?  I was standing right there, just like my husband had been, when Matt told us.  As usual, in my way, I was concentrating on studying my cute little brother, thinking that he sure was tan, he had just had a haircut and looked so handsome, and he looked like he had lost weight.  His clothes were just hanging on him!  Was it just that he had been very active in working on his little farm, or was he on some new diet routine? This is another aggravation:  I missed nearly everything he said, because I was in my own little world of wondering.

This got me into trouble when I was a schoolgirl, when I’d ask my brainy dad for help with a math problem.  He’d go into all kinds of backstory, touching on Pythagoras and algebraic theorems, and statistics certain ways that current events had an impact on mathematical theories and what-not, and my mind would wander off. . . all I wanted was the answer, and that as quickly as possible, so I could get outside and play, thank you very much.  Twenty minutes later, I’d topple over in a bored faint, and Dad would shake his head sadly.  When I would come to, he’d ask me if I had heard a single thing he’d said.  Of course the answer was always a sheepish “um . . . what?”

It humbles me to think of how smart I might be today, if I had paid attention to all these attempts Dad made to educate me.  Oh well.  Water under the bridge at this point.

So, the next night, I determined we would follow Matt’s instructions to the letter.  I’d just have to ask Bryan exactly what these instructions were again, since maybe I missed something in the re-telling.  I had been outside, and watching the chickens with one part of my brain while Bryan went on and on . . .

Gentle Reader, you are in for a treat.  This was a pretty interesting (though frustrating) few weeks, and I’ll post the whole story, day by day.  Don’t miss a day of it! Are you ready?  Let’s go!

5 thoughts on “The Dreaded Varmint, Day One: we have a problem”