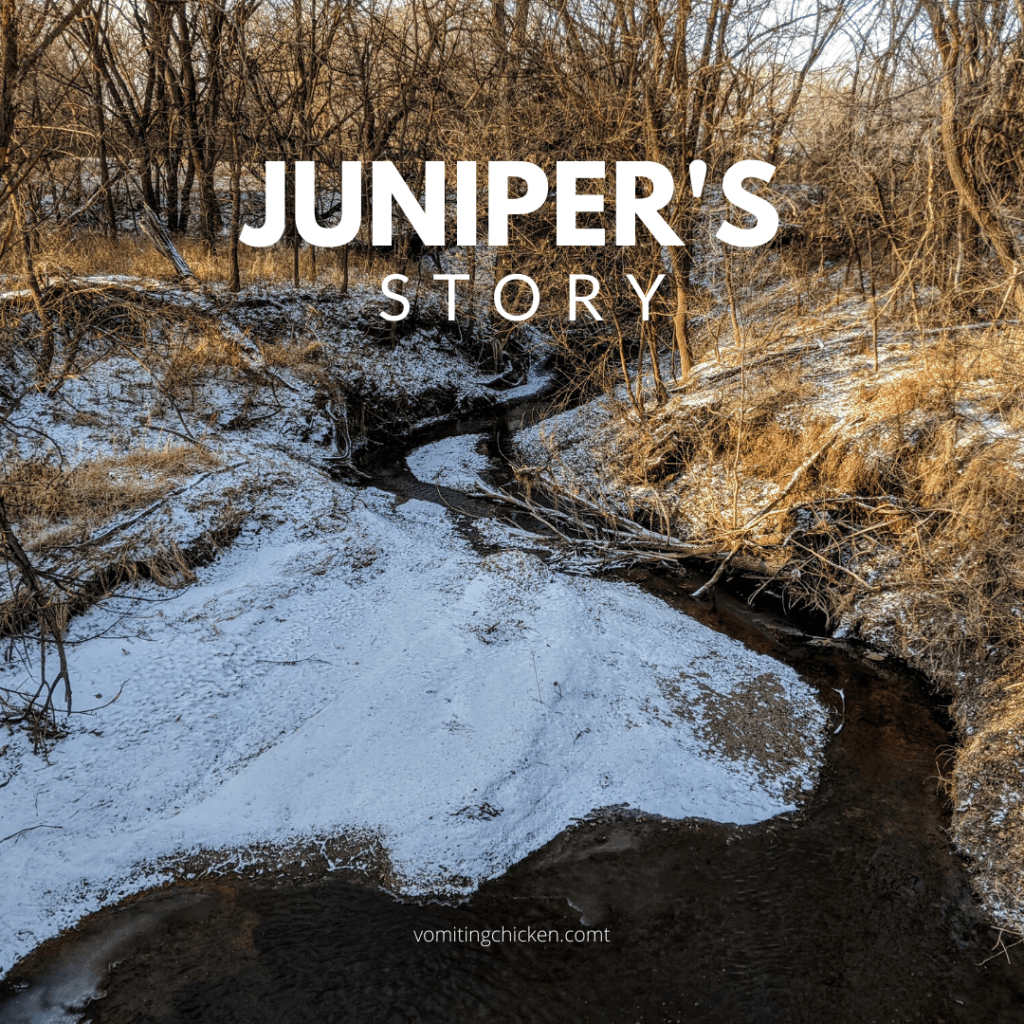 Juniper is a young female raccoon, and she is featured on the labels of my new dried herbs and spices tins. Coon Creek Herbs is the name of the new business that Juniper inspired, and this is her story.

Juniper lived with her family–her mother, brother, three sisters, and several aunties with their kits–along Coon Creek, amidst the wild growth of old trees, bushes and wildflowers. The land surrounding Coon Creek had been a left-alone place for as long as anybody could remember, and it was their home. Though the creek meandered through fields that were cultivated and neatly planted to crops, many wild creatures–not just the raccoons–made these untouched areas around the creek their home.

The young raccoons romped around together during the nighttime*, scrambling through the lush vegetation that grew near the creek, chasing small fish in the water, leaping after frogs. Food was abundant for the wild creatures there. Great quantities of raspberries, gooseberries and even trees with wild nuts, too, grew in the fertile soil. Wildlife was abundant. Songbirds raised their young in the old trees; butterflies and honeybees filled the air and pollinated blossoms.

During the day, duck families paddled past, waking Juniper with their scoldings to keep a distance from their soft ducklings, the plump winsome things that bounced along in the water like strings of fluffy fishing bobbers. Occasionally a bald eagle soared overhead, and a solitary owl also flew past every night, watchful for his dinner. Migrating Canada geese stopped to bathe, rest, and spend the night near the water.

There were days of heavy rain–too much rain!–in the Spring, and the creek would escape its banks and flow into the neighboring cornfields. The flooding would last only a day or two, until the trees and vegetation would draw the water back into the creek and into their roots, where it was welcome.

Juniper and her family had a place of their own. It was a good life, for a raccoon. 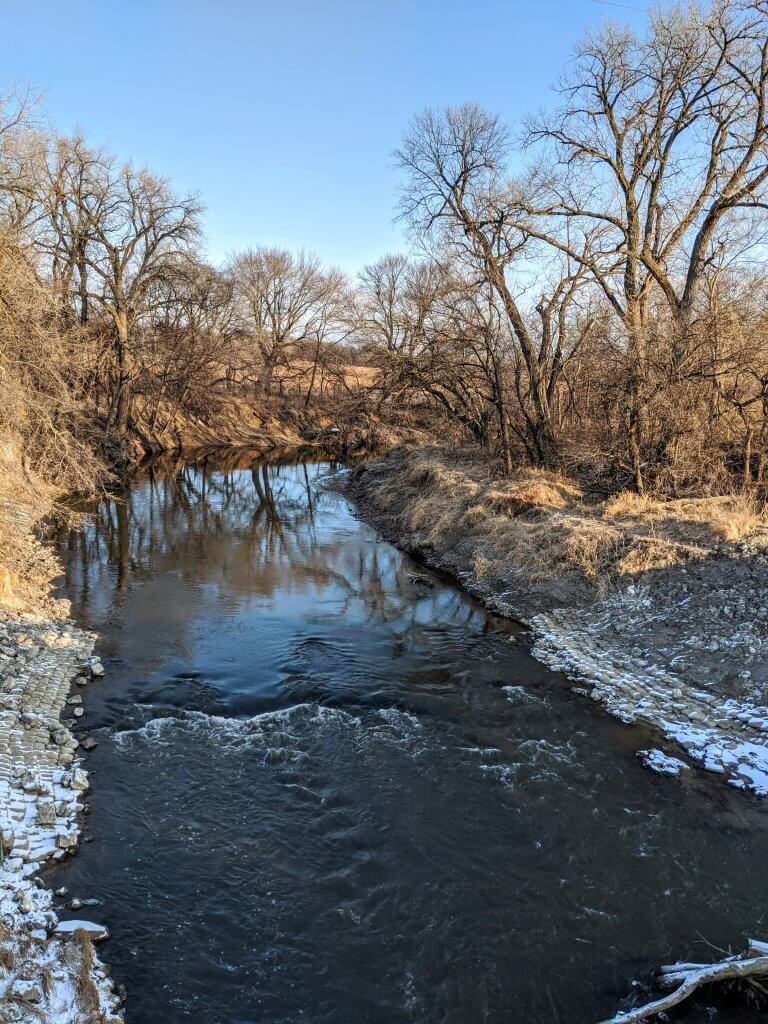 It was a good life, for a raccoon. There were many beautiful spots along the Creek, for fishing, hunting, playing, and resting.

Then The Bad Day came. Junie woke suddenly, just as the sun was easing its way over the horizon. She was gripped with terror. The earth shook and bounced, and fierce rumbling sounds came closer and closer to where she slept. Ancient oak trees were being toppled and torn from the earth itself. Bushes and underground were being smashed and ground into the dirt. Bunnies fled. Birds cried out in alarm, flying away and leaving nests full of young ones behind.

Her mother was nudging her frantically, tearfully: “Juniper, wake up! Wake up and run!”

The gigantic machines were nearly to their dens. In terror, her mama fled, spreading the word to the others, but she looked back once at her young ones, her eyes full of tears.

Junie did as her mother bid her, and her sisters and brother scattered, as well. They ran blindly, away from the confusion and the noise. There was no thought to where they were going. There was no time to think. They didn’t stop until all the noise and destruction was far behind them.

Juniper didn’t stop until she, exhausted, found herself lost in a corn field. She curled up among the plants and slept for the last few hours of the terrible day. When she stirred awake finally, all was quiet and it was dark. She cried with fear and loneliness. She had never been alone before, never been away from her family and the creek home that had been theirs for generations. What was she to do now?

That first night, she crept back through the rows of corn and found the creek, but she barely recognized the land that she had loved since the day she was born. Everything that meant home to her was destroyed. The creek itself was still there, of course, but the trees, bushes and brambles had been torn down and now lay in piles. The cozy underground dens were smashed in. Everything was destroyed. Nothing was left of value for the wild ones.

The piles of rubbish and toppled trees had been pushed into huge piles and set ablaze, and were still smoldering. It was an unfriendly, inhospitable place now. At least for wild creatures. Juniper looked at it, crushed and confused: “If the wild places are destroyed,” she thought, “where will the wild creatures live?” 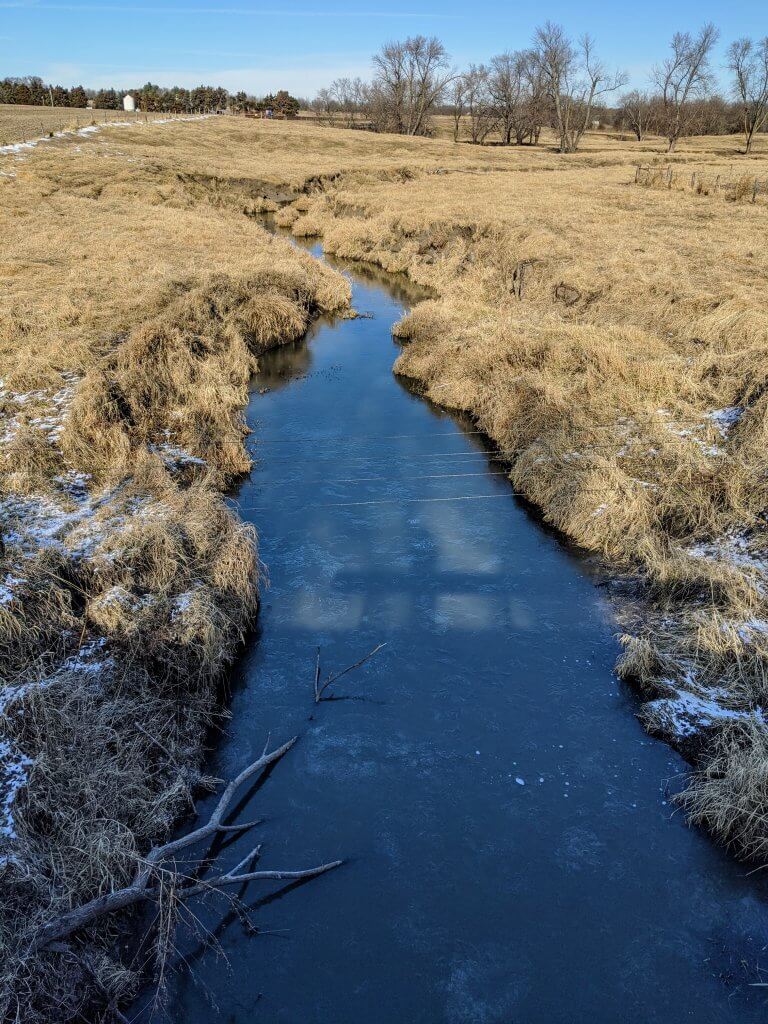 If the wild places are destroyed, where will the wild creatures live?

She returned the next night, and the next, hoping to find her family there.

“Mama?” she called, quietly, in the darkness.“Ivy? Tansy? Violet?” Her sisters. “Gerald??” Her brother. Her papa lived with the other males. She sat on the slick creek bank in the dark, remembering how much pleasure she had taken from sitting here with her family, just days ago, savoring the night sounds. The screaming repetition of coyote pups on the hill, mimicking their parents. The wind through the crackly leaves on the cottonwood trees.

She knew it had been a treasured life when she had it. Now that it was gone, she wept bitter tears that she might never have that sweet life again.

She heard people walking down the bank toward her, and once last time she fled–this time, through the corn rows and even further–and she ran until she had to stop and rest. Right before she fell asleep, she smelled something familiar . . . raspberry brambles? There were other pleasant smells that she didn’t recognize. But the raspberry leaves were a welcome scent that reminded her of home.

Juniper woke up with the sun the next morning, and looked around. She was very hungry. Besides the raspberry brambles, there were abundant beds of flowers, and clumps and rows of herb plants: rosemary, thyme, basil, parsley. It seemed that she was in somebody’s garden, and there was wildness to the it that felt homey and familiar.

It wasn’t Coon Creek, but it was nice. It was quiet, and felt safe.

She dug into the loamy earth and found earthworms and grubs to eat for breakfast, and some tasty roots, too. An old woman wearing tattered work clothes clomped through the garden past her, and Juniper hid among the herb plants.

She stayed out of the old woman’s way, and hung around the garden for a few days. The chickens and the ducks and the geese that the woman raised weren’t her family, but they helped her feel less lonesome. The woman was busy with her work; maybe she was nearsighted, too. For whatever reason, she didn’t seem to notice Juniper moving around through the overgrown raspberry thickets.

Juniper decided to stay, at least for the season. It wasn’t home, but maybe it soon would be.

It’s young Juniper, tasting the rosemary, who graces the tins of the dried herb mixes I’m offering to you now in my new blog shop: Coon Creek Herbs. They are grown right here in Nebraska, dried, mixed and packaged up just for you. Here’s where you can learn more about how they came to be.

Ready to grab some up for yourself? Click here to order!

(Now when you see this little lady raccoon, you’ll know the rest of the story . . . at least the first part of it!) 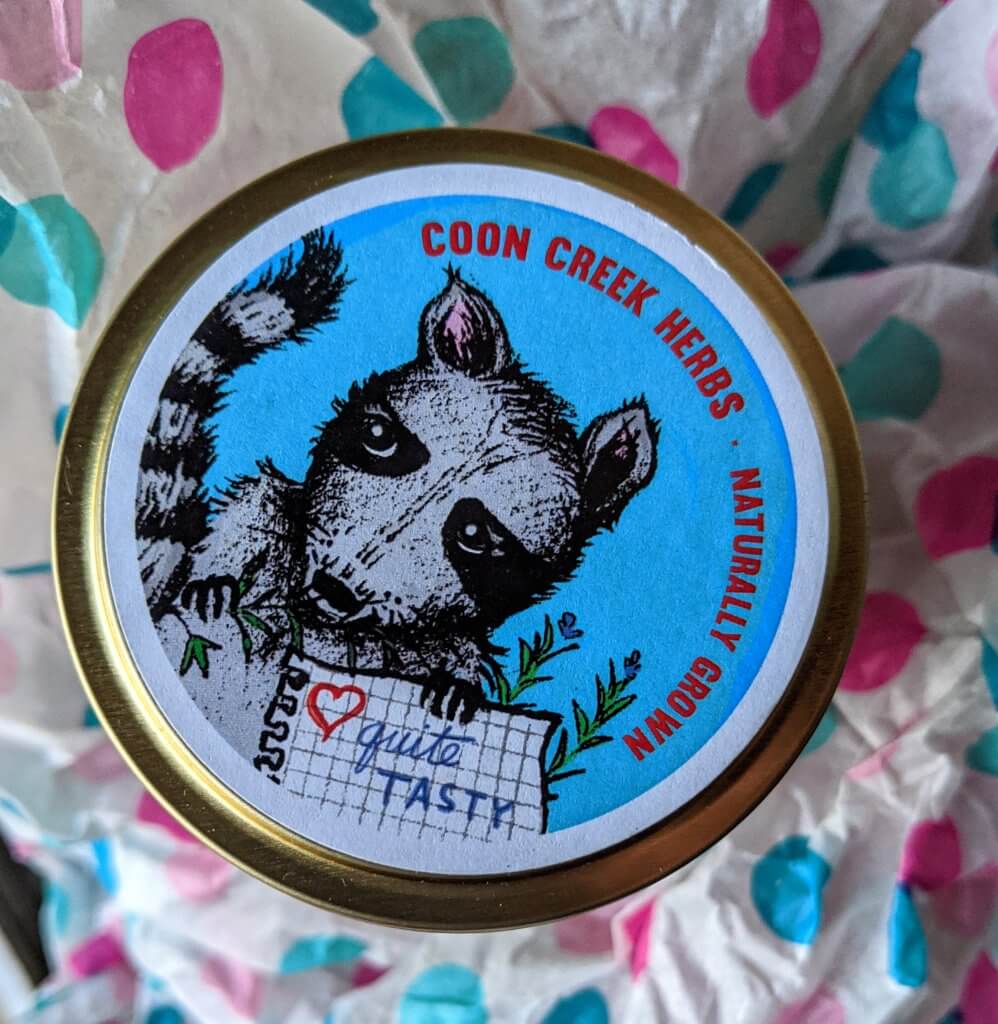 p.s. Here are a few facts about raccoons that I found interesting while writing this piece:

**Captive raccoons have been known to have lived up to 20 years, though in the wild, their average lifespan is 1.8 to 3.1 years.

*Raccoons are nocturnal generally, but it’s normal behavior for them to also be out and about in the daytimes.

***In general, young raccoons live with their mothers. Males hang out in their own groups.

Thank you, thank you, thank you, gentle reader, for reading to the very end. Do you have a friend who might enjoy learning about Juniper and Coon Creek Herbs? Then if I could ask you a favor . . . would you share this post with that friend? I’d appreciate it so much.