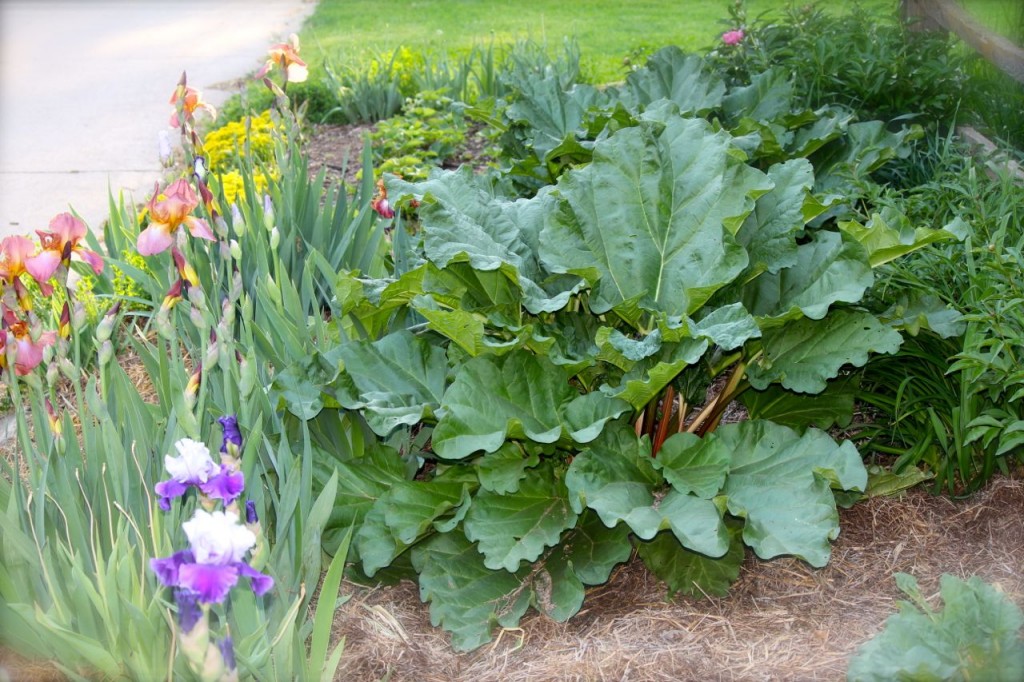 Rhubarb can be a lovely addition to your flower garden. This is my Mom’s.

I was in such a hurry to get out to the garden today (good chance of rain tonight, and tomorrow, and the next day . . . ) that I forgot to eat breakfast, and Amalia and I pulled weeds, hauled mulch, cut and laid out cardboard (I’ll write about this later, promise) over the brome grass that is trying to take over my garden space (get back, get back, I say!) until noon.

(Little Mack helped too, spreading hay, but mainly hauling bricks in the little red trailer until his heck-for-leather-speediness and enthusiasm for anything tractor-related wrecked the hitch on the trailer, alas, and he ditched the trailer to come tell me that his hauling hours were done for today. *sigh*)

By noon, I was famished but still had enough energy to do one more job before heading in to the house for lunch. I released Amalia and Little Mack to trudge back to the house, and promised to follow them as soon as I’d weeded most of the strawberry patch. I have just a few strawberry plants (maybe twenty) and they are, happily, covered with blossoms, so I don’t intend to let the weeds get the better of my berry crop.

The strawberry plants are situated at the rhubarb end of the garden. I’ve been watching the rhubarb plants hungrily, waiting for the day when the stalks are long enough to pull. I didn’t freeze any rhubarb last summer, so it has been a good nine months or more since I’ve tasted it.

And. I dearly love rhubarb.

As I pulled weeds and mulched the strawberry patch, I got hungrier and hungrier . . . for rhubarb.

Alas, all I could think of was rhubarb crisp and rhubarb pie, but I knew that I didn’t have time on this day to make either one. So, in my hungry imagination, I made a poor man’s rhubarb crisp, probably better named lazy-mom’s rhubarb crunch, and by the time I got up off my knees and straightened out my back, and looked hard at the rhubarb, I was nearly drooling. 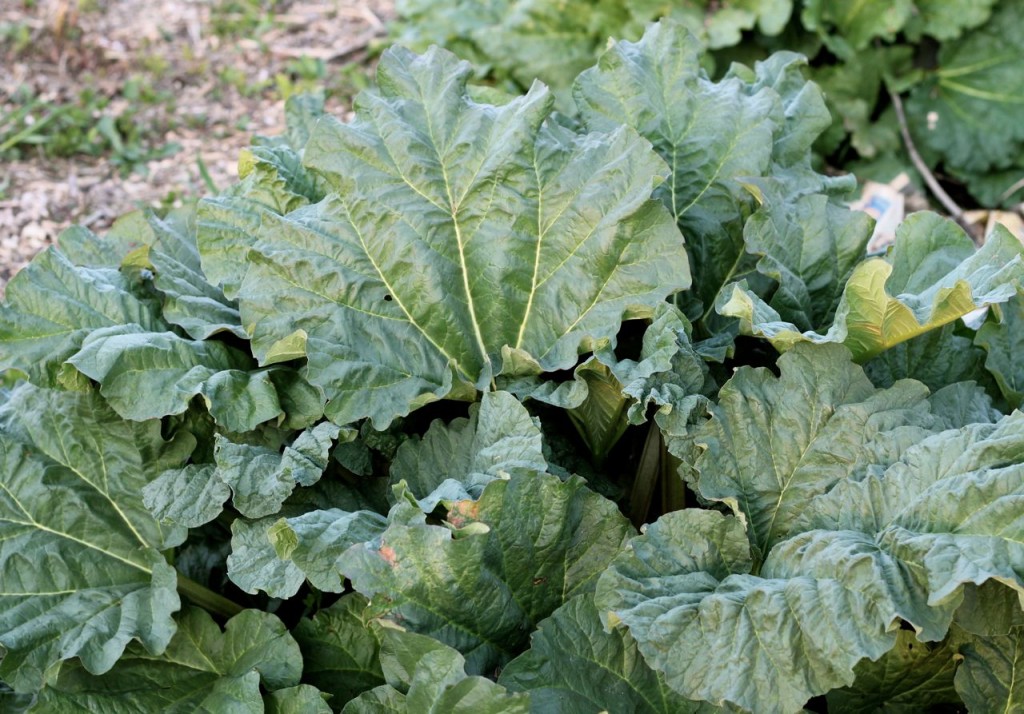 I pulled a couple pounds of rhubarb and headed to the house, picking a handful of fresh nettle leaves on the way (Little Mack and I are stuck on green lunchtime smoothies while the nettles are so wonderful).

Once in the house, I went right to work, and by the time our smoothies were ready, my rhubarb sauce and crunchy topping were done too, and we ate Poor Man’s Rhubarb Crunch for lunch. 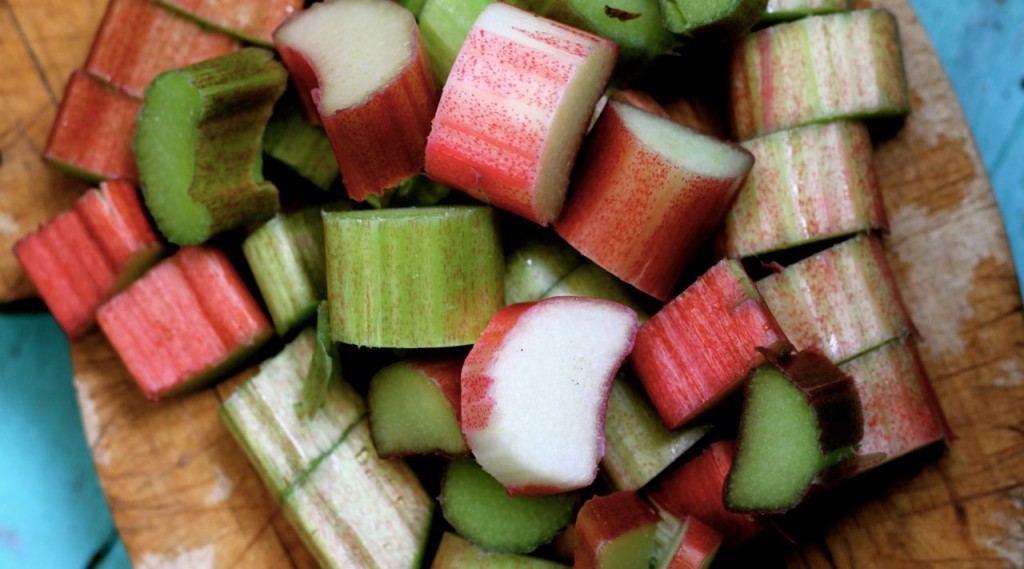 Or Lazy Mom’s Rhubarb Crunch. Whatev. Except that I ain’t lazy, you know. 🙂 Most days.

It was everything I had hoped it would be. 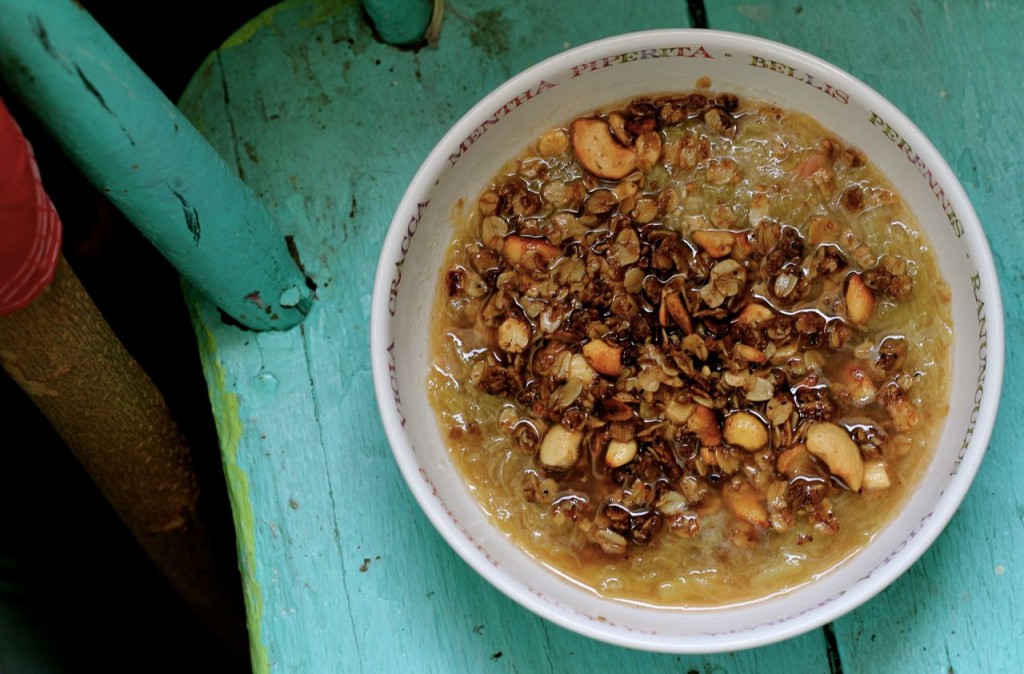 Here’s the recipe for you, and my sincere hopes that you have rhubarb available in the market where you live, or better yet, growing in your back yard.

Poor Man’s Rhubarb Crunch for Lunch
Author: Amy from vomitingchicken.com
Prep time: 5 mins
Cook time: 15 mins
Total time: 20 mins
Serves: 4
Rhubarb is a wonderfully nutritious and low-calorie vegetable that you can make into any number of tasty dishes! This dessert/lunch is an answer to a powerful rhubarb craving when you’re too pressed for time to make anything more grand, but it stands on its own!
Ingredients
Instructions
3.3.3070

By the way, have you signed up to my mailing list yet? Just click over here to be in on all the action I can muster, and to get a little bonus for signing up!

Tagged on: easy rhubarb sauce recipe, fresh rhubarb desserts recipes, good rhubarb recipes, growing rhubarb in the Midwest, how to grow rhubarb, how to make rhubarb crisp for one, rhubarb, Rhubarb Crunch dessert recipe, when is my rhubarb ready to pick?