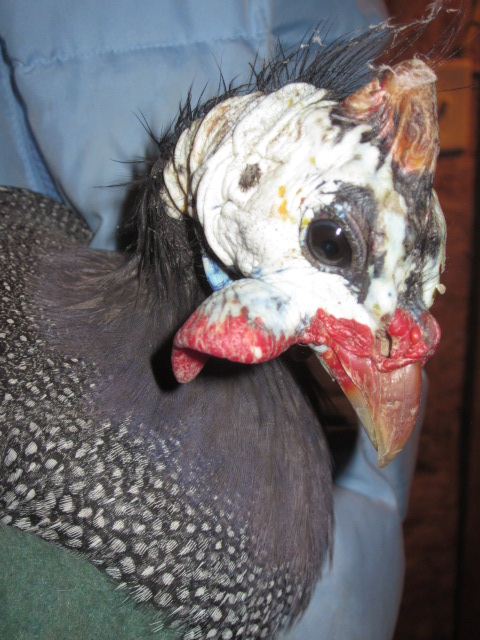 I noticed, with dismay, the other day that my flock of about fifty hens was starting to look a little bedraggled.  A couple of them had bloody spots on their backs, and most were missing feathers, more than usual, anyway.  In fact, before I had let them all out of the coop, I had listened to the thumps and bumps from within.  It sounded as if somebody was standing in there, throwing my hens against the walls!  I knew this was not true, naturally. I stopped my chore routine–carrying water and feed–to stop and watch the flock for a few minutes, as they scuttled about in the chicken yard.  This abuse looked more serious than just wear and tear from the amorous attentions of the few roosters we had.

I could see where the problems were originating, right away:  it was the guinea fowl.  My dad had given me five guinea chicks last year, which I raised with my chickens. We enjoy these odd-looking birds, who resemble partridges.  They are apparently native to Africa, and I was happy that they acclimated well to living with our chicken flock.  Many people in our area keep guineas specifically to keep the insect population down, and they do a great job of scrambling about, snapping up bugs in impressive numbers.  Plus, they sport the most beautiful feathers–black with perfect white polka-dots.  I heartily endorse having polka-dotted fowl about! 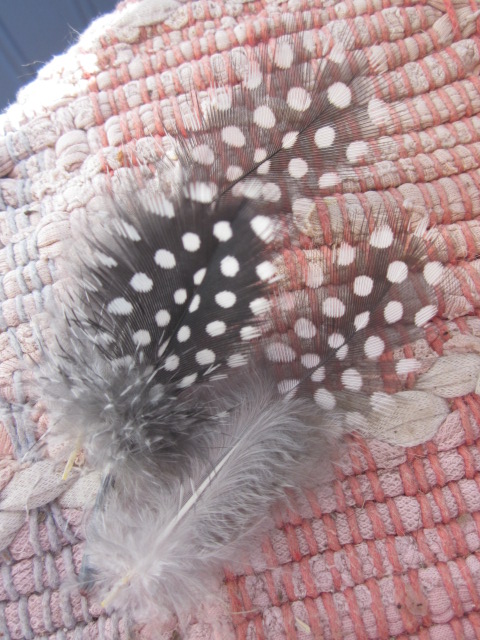 See what I mean? Polka-dotted feathers!

However.  Apparently the winter is getting a bit long for all of us, people, chickens and guineas included.  The flock is shut up in the chicken coop from sundown until sunup every morning, and the coop is (admittedly) a bit small for all that fowl.

Our first guinea (an orphan that Dad rescued from a friend’s flock) we named “Hope” because the chick was all alone, and it was our hope that she would survive.  She did, happily.  The rest of the guineas (Dad brought us a few more chicks to keep “Hope” company) we named Peace, Joy, Love and Self-Control.  That was one day.

We abandoned those names before long, and named them instead Dweedle-Dee, Dweedle-Dum, Dweedle-Dae, Dweedle-Doo and Dweedle-Dip. They are such comical birds that the fruits of the spirits names just didn’t fit for long.  They zip around all in a unit, stopping often to cry out raucously for no apparent reason.  Mostly, we just laugh at them and watch them in great humor.  You would, too, Gentle Reader.

But the day that I realized that they were beating up on my beloved hens, I stopped laughing.  My brow furrowed and my jaws clenched, in fact.  My elbow started to get itchy, as my Grandma Young would have said, when she was watching a naughty child.  I could see that the guineas (now named Bossy-Boots, Biggity-Big, Brassy-Bottom, Pushy-Pete, and Despot) were keeping the hens from eating, and intimidating them in the chicken yard, giving them sharp pecks with their hard little beaks any time they as much as looked at the food.  Even if I put the food in several little piles around the yard, the guineas would still scuttle about frenetically, guarding all the food piles.  “Mine, mine, all mine!!”  Greedy little beggars.

Nobody picks on my chickens, Gentle Reader, especially not a flock of wild African interlopers, no matter how charming the feathers that they happen to sport.  I decided, in that stark instant of realization, that Something Must Be Done.  But what?

The plan came to me later as I went about my day, but I knew I would have to wait until the sun was down and the guineas were on the perches for the night with the chickens, therefore presumably calm and sleepy.

I told the kids about my plan after supper, and before I was done with my explanation, they were pulling on boots and warm coats and protective gloves.  They are good kids, and always up for an adventure.  Moving the guineas to another domicile, I was sure, would be an adventure.

We do have another fowl house on  our property, a good ways from the chicken coop.  My plan was to move the five guineas to this house with their own supply of food and water (which they would not have to share) and hope that they would be content there, thereby benefiting the chicken flock.

This was the plan:  I would catch the guineas, and hand them, one by one, to the kids.  Timothy and Amalia would each carry two birds, and I would follow with the fifth.  We’d carry them across through the dark to the duck house, where they would live from now on.  Happily.  Contentedly.  No more beat-up chickens, no more greedy guarding of the food.  That was the plan. 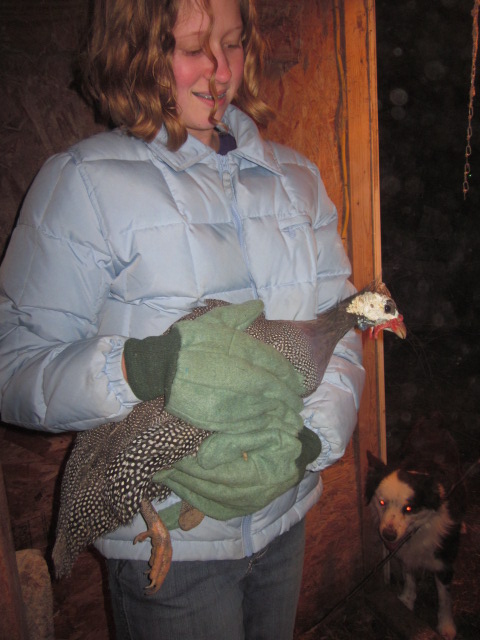 Amalia is using all her strength to hold this guinea.  Bea is waiting for her to drop the bird.  I don’t know why my daughter chose those huge gloves.

The Plan didn’t match up with the reality, however.  The reality was this:  guineas are clever and fast, and much stronger than I even imagined.  Chickens, when you catch them, will relax immediately in your arms, preparing themselves mentally and docilely for the worst.  Guineas, on the other hand, I found out, will fight to the death when captured.  It took all my strength, once I laid hands on a bird, to keep it from wriggling and wrenching its wiry body out of my hands.  Criminey, I hadn’t counted on this. 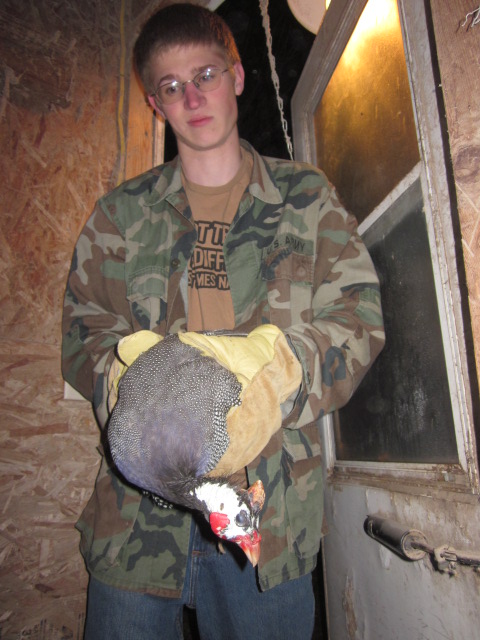 Here Timothy tries to keep Dweedle-Dum from wrenching free of his grasp.  That look of pain on his face is because he suspects that I am getting his face in this photo, which–of course–I did.  He loathes having his picture taken (Timothy, not the guinea) and I love taking his picture, bless him.

So I decided on a Plan B, as any good Prairie Woman will.  I handed the guineas to the kids, one at a time, and they carried the guineas across to the duck house through the dark.

Someday I shall learn to take night photos, and when I do I will go out and take pictures of the exquisite crescent moon that was shining down on us, not to mention the constellation Orion, the Hunter, because they all lent some glamour and magic to the homely task of moving these angry, ungrateful birds to their new home.  But for now you’ll just have to imagine this.  Also imagine frosty air coming out of our mouths, because it was quite cold.  Also I think everybody was laughing except for the guineas.

I slept well that night, knowing that my chickens were not going to be in harm’s way at sun-up, being beat up and harassed by the African interlopers.  In the morning when I approached the coop, I heard no sounds of travail and anguish from the inmates.  Only peace and quiet.  Ahhh.

I let the chickens out, and all was sweet in the cold morning air.  Hens ate contentedly, where before they would scuttle about, avoiding the guineas and hiding in the corners of the chicken yard.  My plan had been a success!  I allowed myself a few moments of satisfaction, watching them before I went to let the guineas out. 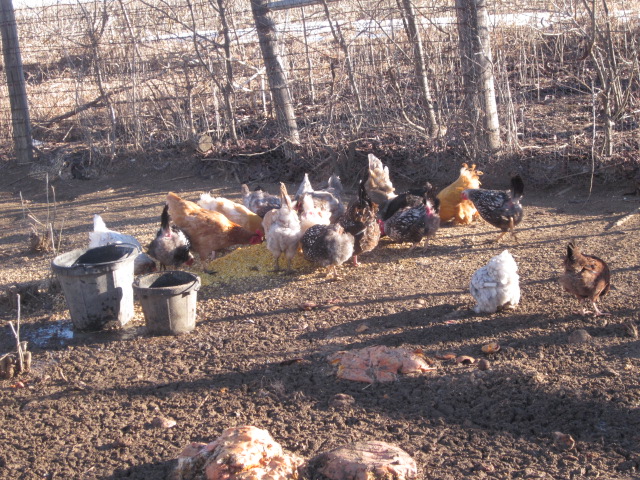 See how serene the chicken yard is, sans guineas?  The hens are doing what they should be doing first thing in the morning–eating their breakfast.

Then I went to let the guineas out.  They were quiet in the duck house, too, and even (dare I say it?) seemed sorry to be the cause of so much trouble.  Contrite, repentant, even. 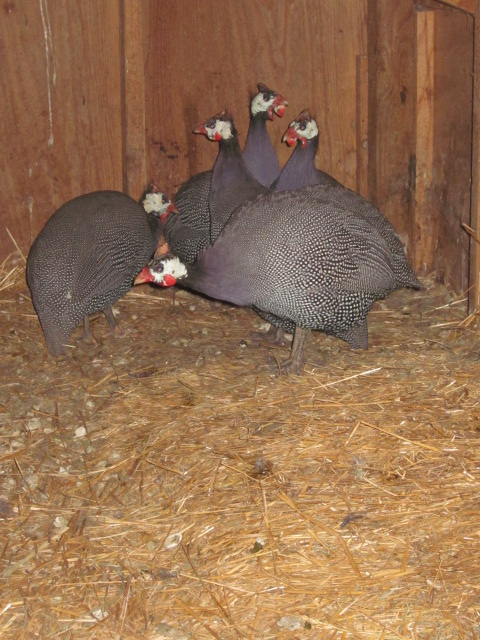 Guineas in the morning were different birds from the vigorous denizens of destruction the night before.

I had laid out their breakfast and water the night before, so after I opened up their door into the duck yard (we have no ducks on our place at the moment) I walked around the house, intending to now feed the dogs and cats.  Still wrenching my arm, patting myself on the back.

That’s when I heard it.  The raucous screeching of those five guineas, angry as all get-out, as they headed Straight Towards Me. 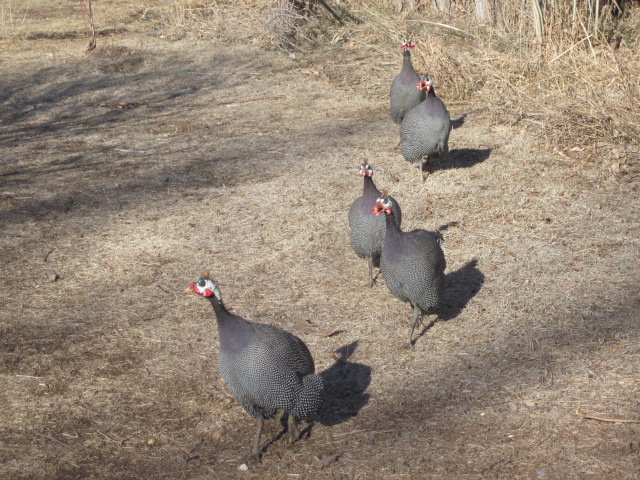 Here they come, single-file, to screech at me for a bit.

They had flown over the fence and headed straight toward me, the dreaded Farm Woman, who had had the nerve to move them someplace they didn’t want to be, the night before.

They stood and screeched at me for a couple of minutes, and then–without a backward glance–they all took to the air, flying to the chicken yard. 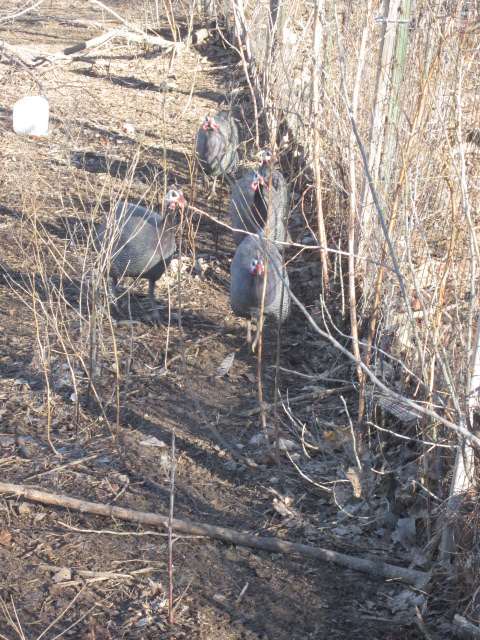 Here they are, noisily fussing about the chicken fence, presumably bawling out the hens within for getting all the tasty bits of breakfast before them.

They then spent the morning pacing up and down the length of the chicken fence, worrying and fussing and stewing and screeching about the way things were now.  Well, that is, until they realized–oh, duh–that they could fly over the fence, after all, which is what they did.

I felt completely defeated by those silly birds that day, but do you know the funny thing–the next morning, when I went out to let the chickens (and guineas) out of the coop, I heard no aggressive sounds: no hens hitting the sides of the coop, no screeching, no squawking, and when I opened the door, the hens didn’t seem as frightened of the guineas as they had been.  The guineas, uncharacteristically, weren’t even the first ones out the door.  Curious.

Moreover, the guineas seemed less aggressive.  They actually seemed calmer and less bossy.  Dare I even hope that our late-night raid on the guineas might have borne fruit in a less obnoxious flock of guineas?  I immediately renamed them again, with hope in my heart:  Contrite, Sorry, Penitent, Happy, and Sunshine.

13 thoughts on “Moving an angry guinea fowl is not for the faint of heart!”