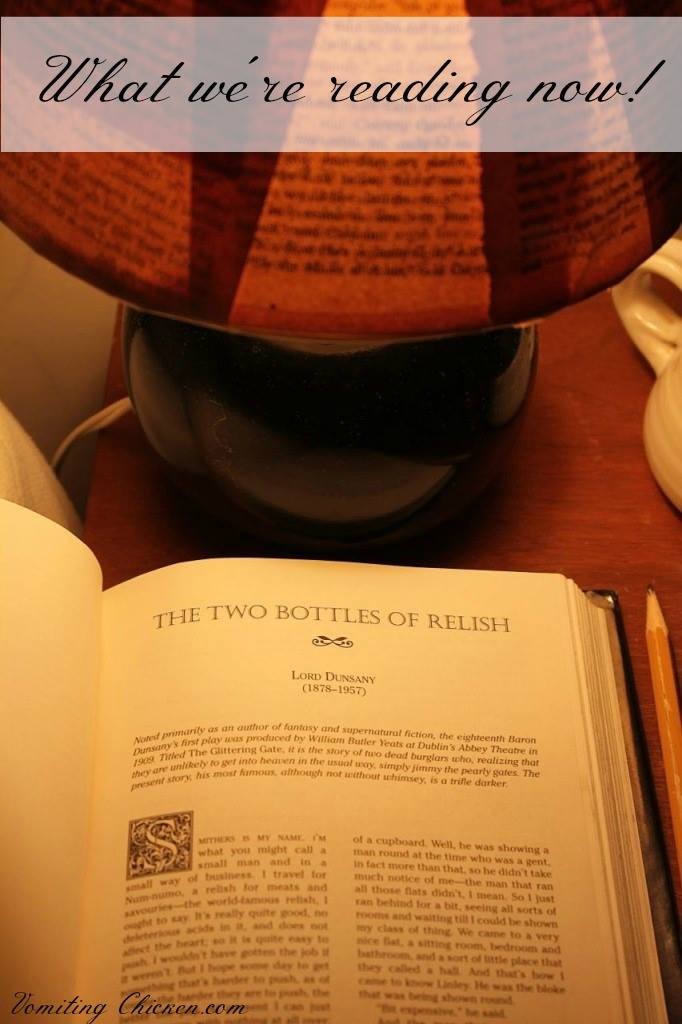 We are a book-crazy reading family. It gives me no end of pleasure to see Amalia curled up on the couch with a book. Or Mack, begging me to let him read “one more chapter, please!” before turning the lights out at bedtime. Or the two teaming up on  me, pleading with me to read just a bit more of our read-aloud book that opens our school day each morning. It’s an unfortunate (and it would be embarrassing, say, if I were a minimalist, WHICH I’m not) fact, however, that our home this day contains more books than I think I will ever have time to read. Even if I live to be 120.

And I have to admit that I feel a peculiar stab of pride that I always am a bit clueless about what’s popular on television. I’d just always rather be reading a book.

“I find television very educating. Every time somebody turns on the set, I go into the other room and read a book.” –Groucho Marx

Here’s what we are reading right now:

A Bone to Pick, by Mark Bittman

Mark Bittman is best known as the author of the cookbook How to Cook Everything, a fat go-to tome for anything basic you want to do in the kitchen, not to mention plenty of non-basic things, as well. I didn’t realize until I started reading his new Bone book that it is a collection of his essays from the New York Times, where he is the only journalist covering the food beat exclusively.

Mr. Bittman lays out what exactly is wrong with the American food system (and there is plenty) and way of eating (ditto) and then lays it out again. His book is a bit repetitive, but if you’ve noticed how much uproar there is in food circles about the state of the American diet, this is a good book to learn about it. Spoiler alert: you cannot read this book without developing a bit of ire towards The Way Food Things Are, and to make an effort to improve your diet, even though admittedly it’s pretty doggone depressing.

But you have to understand something before you can change it for the better, right? 🙂

Here’s an excerpt: “Let’s encourage people to eat real food, which for most people will mean eating better. This is affordable for nearly everyone in the United States. For most people, eating better is mostly about will and skill. Those are not small items, but they’re much more easily dealt with than changing industrial agriculture.”

“Let’s encourage people to eat real food which for most people will mean eating better.”–M. Bittman

This is what we are reading aloud in school this semester:

Here’s a really nice perk of raising such a large family: that is, being given the pleasure of reading favorite books aloud, more than once. When the older kids were all home, we read through the Ralph Moody series of books in their entirety (there are 8 of them!) at least twice. I was delighted a few weeks ago, when we started school, to learn that Amalia doesn’t remember them well, and little Mack has never heard them read before.

If you have small children that you read to, you really, really need to invest in a set of these books. They are some of our very favorites. Ralph Moody wrote them about his own colorful and adventurous life, as a young boy growing up in Colorado, at the turn of the 20th century.

Start with this one!

I remember how aggravated my oldest son used to get when we read these books, because the main character (and the author) seems admittedly too good to be true. It was a different time, when earning a living was often a hardscrabble task, and children were allowed to stay home from school in order to help out at home.

These books are full of adventure that will appeal to all ages, and there are plenty of lessons to be learned from this book and the sequels, many of which the typical American 9-year-old (cough) could benefit from.

Here’s an excerpt, from a lesson that Ralph’s Dad taught him:

“There are only two kinds of men in this world: Honest men and dishonest men. . . Any man who says the world owes him a living is dishonest. The same God that made you and me made this earth. And He planned it so that it would yield every single thing that the people on it need. But He was careful to plan it so that it would only yield up its wealth in exchange for the labor of man. Any man who tries to share in that wealth without contributing the work of his brain or his hands is dishonest.”

“Always remember, Son, the best boss is the one who bosses the least. Whether it’s cattle, or horses, or men; the least government is the best government.”

Okay, Ralph Moody was a conservative, for sure. Read these books! They are awesome!

The Armor of God by Priscilla Shirer

The ladies class at our church is studying this book together. I’ll admit now that I don’t have much use for many of the books that are written specifically for women’s growth and edification in Christian living. Some are too full of bland platitudes and touchy-feely sentiment, and I just don’t feel they are worth the time. Give me meat, say I, in this genre, or nothing at all!

But this book is different. Studied thoroughly, it can be a soul-and life-changing read for the Christian woman. The title and the theme of the entire book is verses in Ephesians about spiritual battle. The author gets right to the point, that our fight in this world in not a physical one, but a spiritual one.

Her book is centered around the powerful (and a bit scary, to be honest!) passage in Ephesians that speaks of the armor of God:

I’m just in the middle of the study so far, but already I can feel a shift in my heart, away from the damaging forces of the evil one, toward truth and grace, living in the light of God’s presence. And that. Is a great shift, Gentle Reader.

And speaking of cookbooks. . .

I read cookbooks cover to cover, and this one is a particularly satisfying read. Being from the Midwest, I savored the down-homeness of this cookbook. And the beautiful photos and the enticing narrative didn’t hurt it a bit, either.

This is one gorgeous cookbook!

Amalia works part-time in a bookstore in a neighboring little town. She loves her job. She spends most of her paycheck on books. She is surrounded by new books at work, and when she has a moment free, she becomes entranced with new favorites, one by one. She comes home every day and

discusses with me which ones she’ll purchase with her next paycheck. 🙂

And quite often she’ll convince me that I need to buy a particular book. I’ve bought a lot of books at her prodding, and she hasn’t steered me wrong yet. This book, by Amy Thielen, is a lush and beautiful cookbook full of regional favorites. I thought the “Midwestern” part would make me feel at home, but it didn’t, actually. The author is from Northern Minnesota, and I think their cuisine must be quite different from ours here in the middle Midwest, because I recognized very few of these recipes. But that’s okay.

I still savored every page of this cookbook. The stories behind the recipes make them enticing and I’ve marked several recipes that I’m going to plan into our fall menus: homemade braunschwager, chicken livers wrapped in bacon and so forth.

I recommend it, whether you are from the Midwest or not!

Let’s head over to the picturebook genre now, just for a second:

Tops and Bottoms by Janet Stevens

Amalia and I had the great pleasure of meeting Janet Stevens–the author and illustrator of this winsome picture book, and many others–at a book conference last weekend. She was entertaining, funny, and real. I’ve loved anything she has had her hand in since I read this next book (that she illustrated) to the kids, at least a decade ago:

The Dog Who Had Kittens, by Janet Stevens

Such a sweet book.

Okay, one more. And yes, I am still enjoying this book (I think I wrote about it in a prior book review):

Why do I love this book so much? Well, first of all: E. B. White, hello. The author of Charlotte’s Web and Stuart Little and The Elements of Style is no slouch in the story-writing department. These essays showcase Mr. White’s skill with crafting beautiful sentences and telling a good story. His dry sense of humor brings a smile to my face. I savor and re-read passages over and over again. It is just a delight to read his work.

I’ve read this book slowly over the past few months. Every story is a jewel, although of course many of his observations are dated, as this book originally was published in the 70s.

Mr. White lived in the country, and so many of his stories and observations are infused with garden and animal matters, which of course I appreciate. Here’s an excerpt from his story “A Report in Spring,” where he and his wife decided to get a new dog.

“There had been talk in our family of getting a ‘sensible’ dog this time, and my wife and I had gone over the list of sensible dogs, and had even ventured once or twice into the company of sensible dogs. A friend had a litter of Labradors, and there were other opportunities. But after a period of uncertainty and waste motion my wife suddenly exclaimed one evening, ‘Oh, let’s just get a Dachschund!’ She had just had a glass of wine, and I could see that the truth was coming out. Her tone was one of exasperation laced with affection. So I engaged a black male without further ado.

For the long ordeal of owning another dachshund, we prepared ourselves by putting up for a night at the Boston Ritz in a room overlooking the Public Garden, where from our window we could gaze, perhaps for the last time, on a world of order and peace.”

I have been rationing out the chapters in this book one by one, not wanting it to end!

What are you reading, Gentle Reader? I would love to hear about your book recommendations in the comments below. Now I’d better get my chores done so I might get a chapter in before school.

16 thoughts on “What we are reading now: treasures in several genres!”